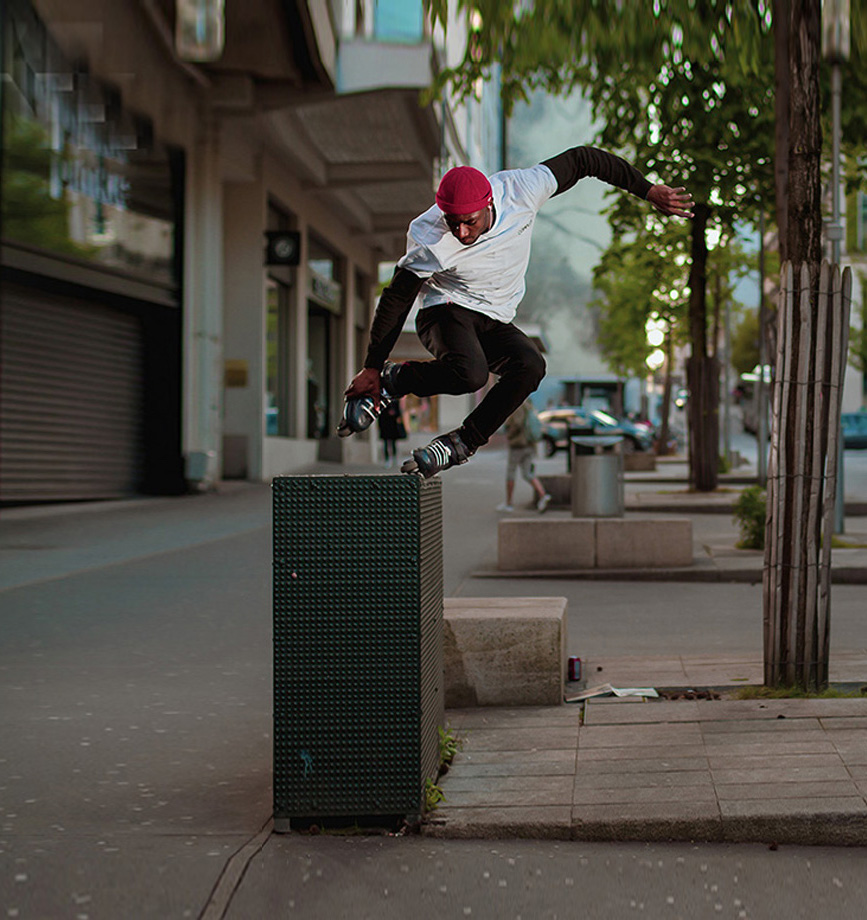 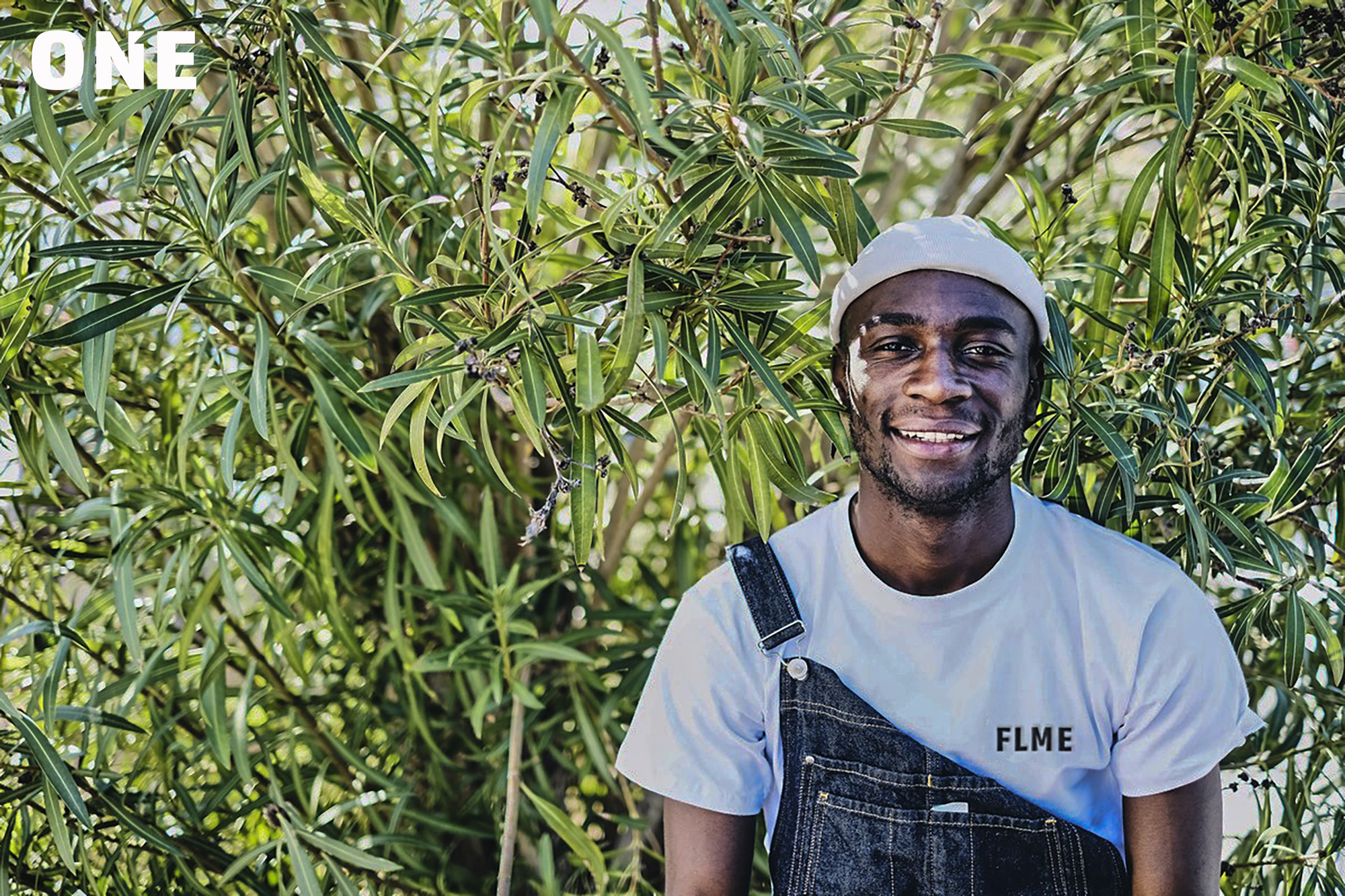 Two years in a row a skater caught our attention at Winterclash with his speed and unique style. This year we got around to doing something about it, and that’s how we met Franck Steve, a skater we came to learn had relocated from Cameroon, where his love of inline skating was born, to France, where his knowledge of the sport and culture deepened into the passion that he has for it today. In recent years we’ve come to more greatly appreciate the diversity and far flung network of friends and faces that blading has brought into our life, and this story further illustrates the universal love of blading that we all share. Read on to learn more about Franck’s life, his skating, and the projects he’s tackling in real life.

Hey man, let’s start at the top with you telling everyone your name, age, and where you live. So go for it.
I am 20 years old, born and raised in Cameroon (Africa) until I was 12 years old, and now I live in France.

And how long have you been blading?
I’ve been skating for eight years now. It’s fun time that goes faster than we imagine. For me, the beginning of my life with rollerblades is a great, long love story. A story that began with a negative approach. When I was a child in my country, in Cameroon, I remember seeing a skateboard. It was rare to see something like that. I remember when my uncle and I used to run on Sundays. When I saw bladers, I saw them with a bad eye, and I thought, “It’s ridiculous to run with inline skates and be dangerous.”

Who or what got you started on skates?
I decided to get skates once after hanging out with my cousin. He would come by on his “rollers” and I’d have to run behind him. I got bored of that so I asked for rollerblades, so my sister’s grandfather lent me his old skates for my tiny feet. But I didn’t care! I started in the hallway of our home, and after two days of getting around in there without using the walls for balance I was ready to go out with my cousin. I was hooked! If I had to go to the supermarket, I went on skates. I was fascinated by the feeling of moving fast. One day after school I saw Olenn Somah skating the skatepark near our school. His skating was really impressive, jumping on all the ramps. That first day he taught me how to do down my first ramp, then we became quick friends. That’s how I met Christian Degiovanni as he came home from school — we were neighbors! He’d never tried rollerblading before, so I had him try my skates and straight away he did a super 360! I couldn’t believe it! Christian and Olenn were friends before I met them individually, and it was fun to meet at the park and learn about skating. Then we created our crew RM.

Besides that, what were some early influences?
The biggest influence was my monkey brothers! I never saw a video online until I heard about this thing called AGGRESSIVE INLINE SKATE!

When I moved to France, Olenn told us about the skatepark The Hangar (our covered skatepark in Nantes). I was so excited during the session — we saw the regulars and they were so good! After the session, Christian was doing an internet search about roller skating, and that’s when we saw our first video of aggressive inline street skating on Youtube. It was Brian Aragon, Mike Murda Johnson, Franky Morales, Alex Broskow, Mathieu Heineman, and Demetrios George. It was the most influential.

Later, a great man that showed me about blading,and made me humble, and every little thing that helps me today in roller skating and life — Guillaume Calixte. With 20 years of skateing under his belt, always performing incredible moves, because he takes care of himself. It’s like that panel “How not to fuck you up your body” they had this year at Winterclash.

What about your influences today? How have they changed maybe from the early ones?
Today we have many different styles but Alex Broskow remains my inspiration. The only skate videos I buy are Alex Broskow, mostly because I knew he wasn’t living as he was supposed to be. I mean, when I see a rider who makes kids dream, who is powerful like him, and who live by their passion like Nyjah Huston, or Daniel Dhers for example, I want to support. It’s sad for our sport not to be at the same height as in 1997.

Eugen Enin launches a new vision of rollerblading as we had never seen before. He performs with ease difficult tricks, and his brother who makes beautiful images to make it whole. Joe Atkinston is a good guy who skates and kills with his FISE World performances. Julien Cudot, who gave me courage when I saw him in the street when he was 14. 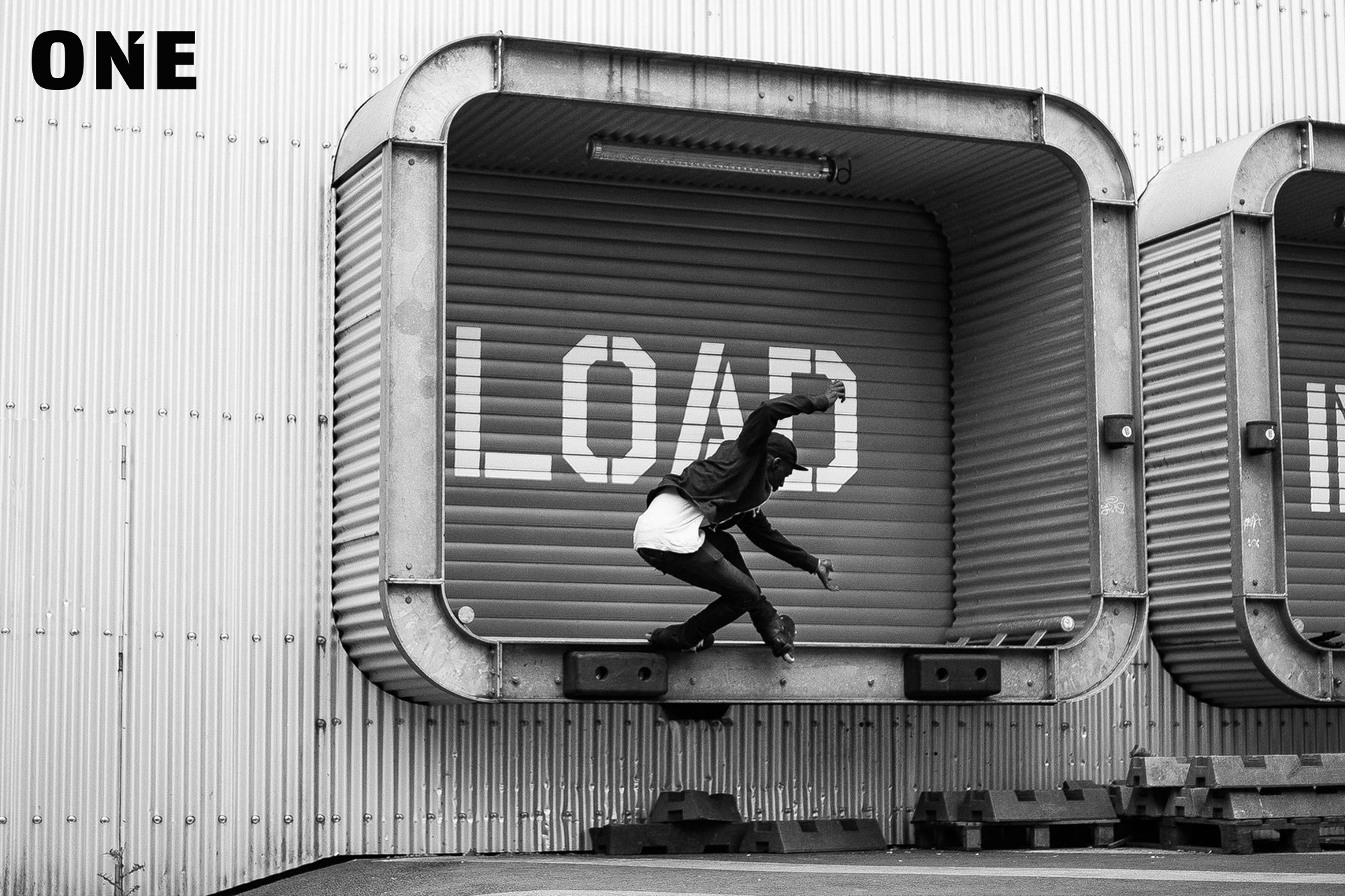 How would you describe the French blade scene to an outsider like me and most of our readers?
The French players are divided into two sides: one group does competitions all the time, and in the other group (the one that I prefer), they skate street. Most of the time, we organize street competitions, because the Nitro Circus and FISE World gave visibility to our discipline.

Every place can be the perfect place for skating, depending on who you are with. I remember when I was younger we would skate all day in our very small skatepark where we typically had more fun that we do today. Ha!

I like to skate street with my buddies, ’cause it’s less fun on my own. Anyway, wherever you are, if the bladers are motivated, you can have fun everywhere. If not street skating, I’ll usually go to the local skate park in downtown Nantes, it’s like my second home. I love when I skate and especially make a lot of lines until I’m out of breath, covered in sweat, and filled with explosive joy, anger, hate, good humor, and especially love. Then I escape like a free spirit.

Besides, it’s been a dream for me since I started to share what I do, because that’s how I discovered this sport. I was impressed when I saw Thomas make a Makio in that same skatepark with his Xsjados, and that’s why the first skates I bought were Xsjado. I love my local skatepark, Skateland, the Winterclash skatepark, and even the FISE skateparks because they change every time.

Stall to Cess / Photo by Hillairaud

How important is social media to your blade life?
Images are especially important today. As that article on ONEblademag reads, we must invest our money in marketing and visuals rather than in products. In fact, I’m preparing my first ENTROPY short film with my friends who never think about inline skating, after the movie Rolling Monkeys 2017, which took me a year to experience the pride of sharing it with my city at an event.

What about events? Do you like to compete, or do you go for the hangout sessions?
Neither one nor the other. What I like is to meet skaters on the park and enjoy my moment skating the park like a soul, because during warm up, it is almost impossible to be “on.” It is also the opportunity to travel and I love that. When I went to Winterclash alone by bus, reading Anne Frank, we stopped in Paris for two hours and continued towards Rotterdam to finally reach the new Winterclash park.

What principals direct how you approach your own blading?
Much more love than tricks (90% love). Sharing is the best thing we can do.

What’s your setup right now and what do you like specifically about the components you choose?
I skate with the Salomon ST 80, ST Vinny Minton 2, ST Aaron Feinberg, with platinum Create Original frames, wheels by Famus and Go project. 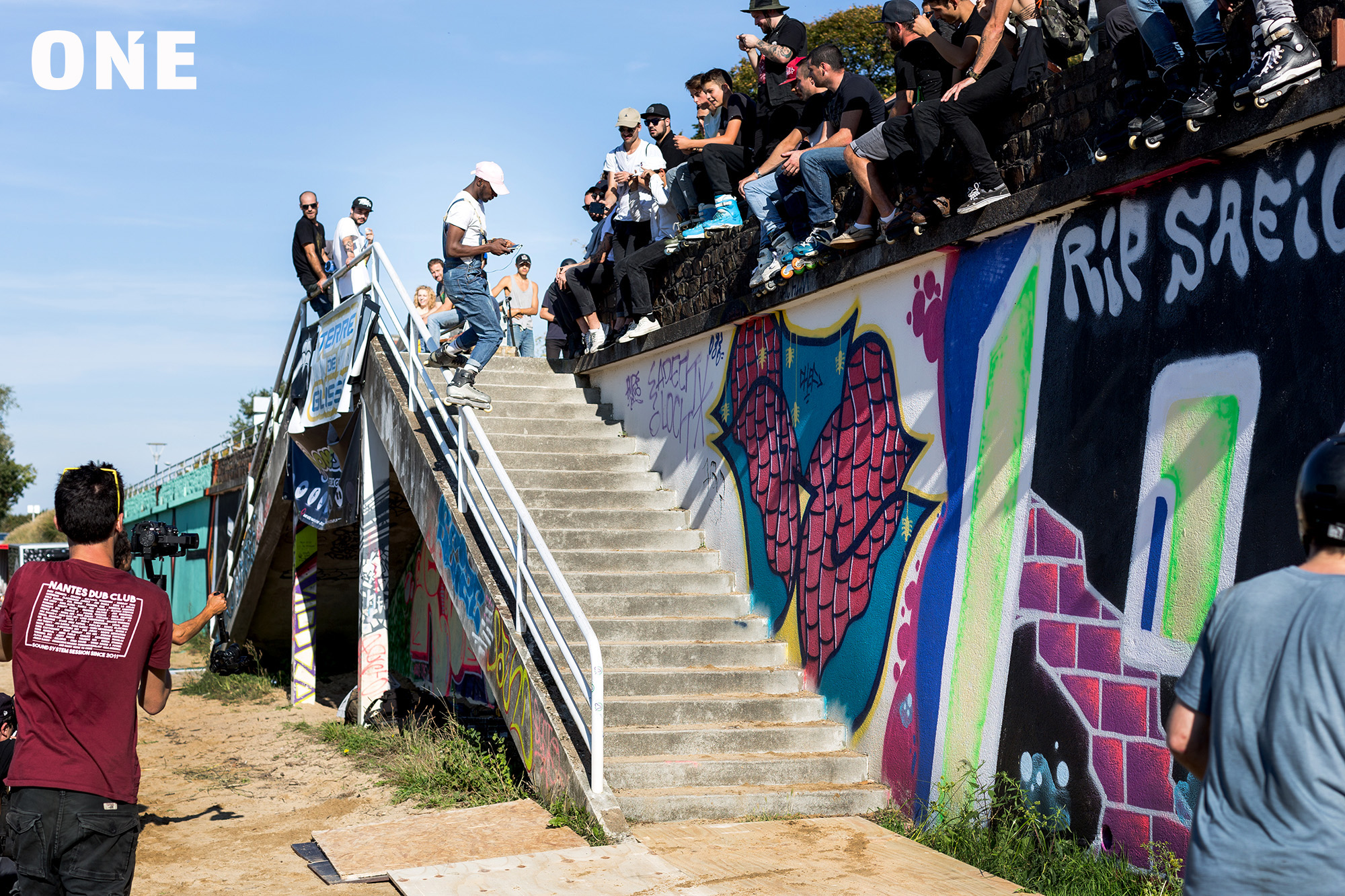 How about off skates — your involved with some film production stuff, yeah? Tell us about that and any significant others, hobbies, etc.
Rollerblade taught me a lot about how I observe the world around me visually and spiritually. I did a video project with my team, and I was very proud when it was completed. It ended up being shared on Be-Mag. That’s what I expect from this one, to motivate my RM team; show them that it’s possible to do some great things when you believe in yourself.

And now I am preparing my first short film. As I said before, the objective is no longer the same. Now I am getting ready to be an old man sitting on a couch watching Entropy, crying and hopefully telling myself that this passion is theirs.

Gap to Fish / Photo by Hillairaud

Delfon Dio by Boysen & Büttner, KCMO by Kelso, Dead & Champagne by David Sizemore, Franck Trozzo, Chris Smith, these blade-directors inspire the sorts of movies that I like to watch and how I analyze films. With Entropy, I was inspired by Backstory, a short film by Joschka Laukeninks to play the piano, guitar or rap with my team at a party — and to make photographs. Basically to do what feels natural in the moment.

What about work; what kinda work do you go? Does it affect your ability to blade or how you think about blading?
I studied English and Russian for two years at language university, because I had no idea what sort of job I’d want to have in the future. This year, I did some work in the audio-visual sector for small businesses. Because audiovisual schools are too expensive for me, I’m currently looking for a public school or a less expensive place to study for this year. 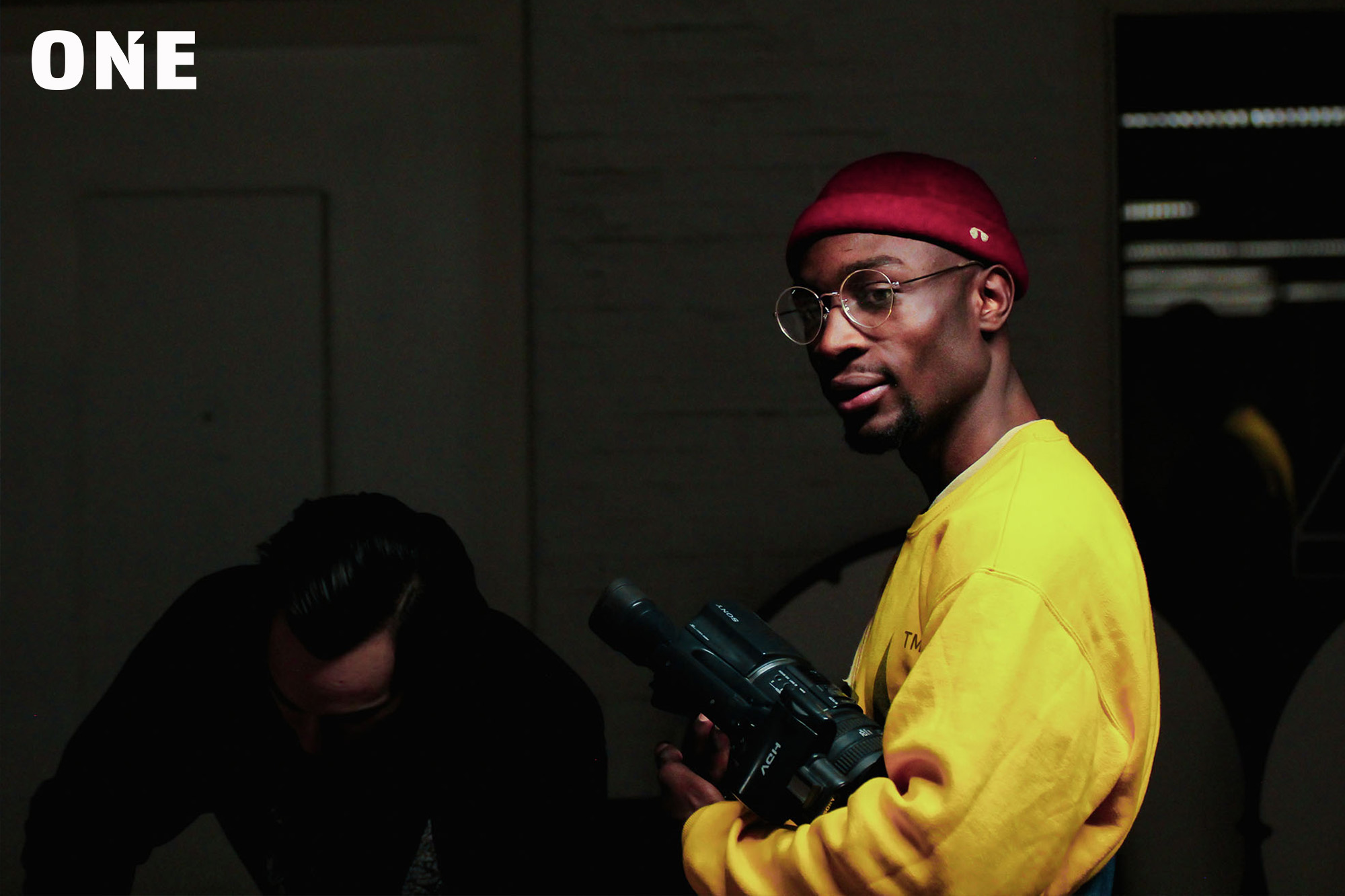 So what’s next on your schedule? Traveling to any upcoming events this summer?
I am currently working as both a cargo handler and film maker to pay for my plane ticket for a vacation in Cameroon. I plan to go to Fise Montpellier before going to Africa in August. Then I will continue to shoot footage for my short film, Entropy.

I wanted to thank you, Justin Eisinger, for this opportunity. I wanted to share my vision with you and all readers of ONE.

I’m glad I’m still alive today, you know, because I was in an accident last summer. I almost drowned and ended up in a coma for two days. The doctors told me there was only a 10% chance I could skate again… but I made sure it was 100%. So skating feels so good.

I am also excited to see my family again this summer. My grandfather is my inspiration and will be forever.

Life is beautiful, friends, just look around and you can feel it.

Okay then Franck, thanks again! Best of luck with everything and have a great trip home!