Fromm in the City: Jon Fromm in NYC

Written by ONE Staff - Published on Tuesday, September 13th, 2016

Oh, you had two events in NYC in September? Fromm cares not for these things. Fromm has his own agenda! He will not be stopped! That path took him from San Diego to NYC one week after the Boschi Pope Skate Off, which is a bummer on the top level but as Jon Fromm describes in his tour journal, getting a chance to hang in the city without any obligations was a blessing. Sometimes things work out, other times they fall through. This is a story about a good weekend in a big city with words by Fromm and pics by Omar Rodriguez. Enjoy.

I decided to take a little break from the west coast for a weekend and booked a flight out to NYC for four days of skating and city exploring (with no driving). Leading up to the trip I received a lot of angry messages as to why I wasn’t coming out for events like NYSS or Boschi Pope Skate Off. Believe me, I wasn’t trying to avoid these — it just happened that I booked a trip when I was available, and it wasn’t during these awesome events. And though I missed both comps I was looking forward to skating the city and enjoying my time in New York without a contest for a change.

The weekend proved to be just that. Good homie Ryan “Buck Wild” Strauss came through for some laughs as did my other friend, Omar Rodriguez, who had just moved from Florida to Connecticut.

It turns out we were about to get some quality sessions in during our trip. On day one we met up with local filmer superstar Sean Grossman to get a few deals for his upcoming flick “Caprice.” One spot in particular was this curved wall rail that was just down a few streets from Grand Central Station. I’d never had the opportunity to skate a spot like this, so I was happy for a chance to get something cool. I managed to get a few deals, and had a little run in with a lady on the street which isn’t uncommon since the landing was very tight, right into NYC traffic. On one of the attempts Sean didn’t see her coming and gave me the the all-clear, then I almost landed on top of her. In true NY fashion she responded with “What the fuck are you doing?! This fucking New York, get outtaaa here!” Classic for sure.

Day two say us linking up with recently transplanted Andrew DiPaolo, who came out from San Diego several months ago. Andrew brought out Columbian native Ivan Higgins, and it was cool to session the city with two dudes I’d met in completely different parts of the world. That’s what I love about blading! We capped off the night with a comedy show at an authentic NYC comedy club courtesy of Andrew (Thanks for that boss!).

The trip ended with a day in Waterbury, Connecticut (Happy Gilmore, anyone?) where Omar lives. He took us on a tour of the spots which included this down rail to bench line jam that was a lot of fun. Of course getting the line took longer than I’d expected, but at least I left with what I wanted. 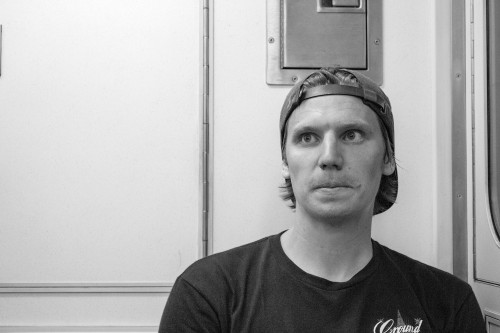 After the session we had a nice cookout at Omar’s house with his fiancé and their new daughter. Conversations about blading and old memories filled the room and many laughs were had. It was definitely a great way to end the weekend.

NYC was good to me. Thanks to everyone for the fun times! Peace. — Jon Fromm

P.S. — Thanks to my Uncle Ron for allowing us to use his apartment for the weekend!