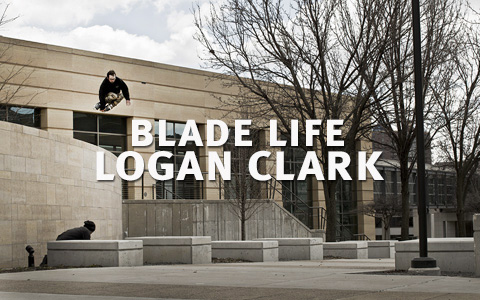 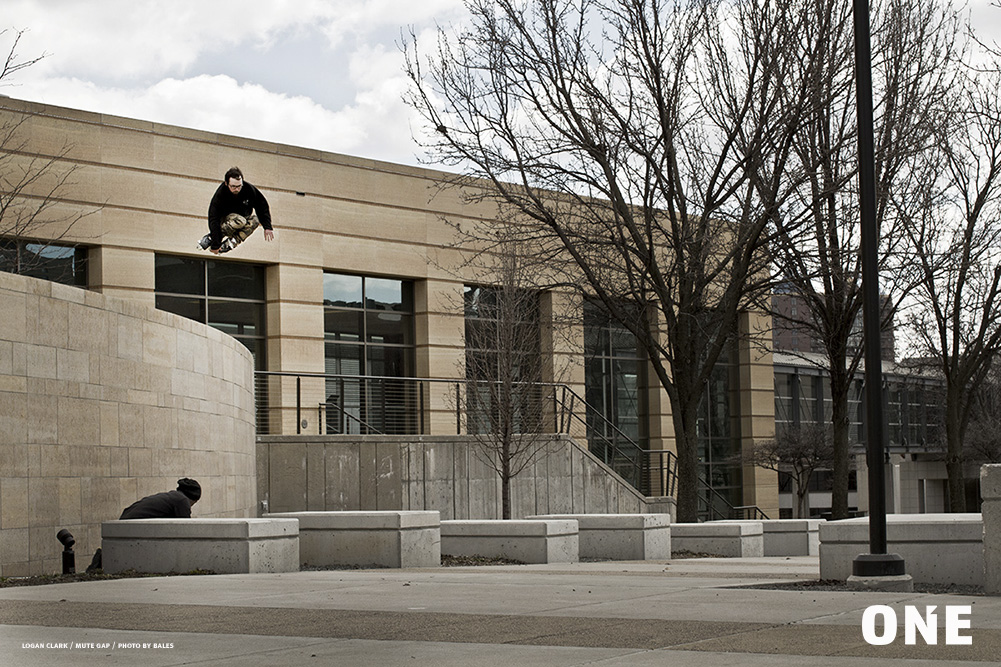 I don’t know when I first met Logan Clark. He’s been a talented presence in the Midwest blade scene for as long as I remember, though his skating has never demanded attention the way many of our best corn-fed shredders do. I don’t mean that as an insult. There is a quiet humility to Logan’s skating. He seems perfectly comfortable skating street or park, stunts or tech, and that comfort can make his skating appear effortless. Logan had some killer photos lying around which seemed as good a reason as any to talk with him about his recent travels, what’s new in the Iowa scene, and what kind of crazy shit happens at a Des Moines gas station at three in the morning.

So let’s start with the basics, where are you from, how long have you been blading?
I live in Des Moines, Iowa and I have been blading for 14 years.

Are you from Des Moines originally, or are you a transplant from somewhere else in the state?
I spent most of my life in Newton, IA. 10 years total. I graduated from there as well. Before that we moved between small towns. 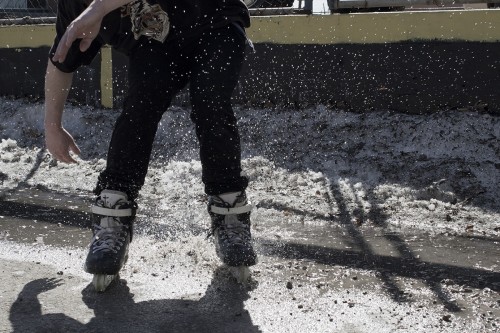 This is a portrait.

How old are you now? I still remember you as a young gun, but obviously 14 years goes by real fast.
I’m 24 now. The beard’s an illusion.

You’ve established yourself as an elder statesman of the Iowa scene. What’s blading like out there now? Who do you skate with and how has the scene changed over the years?
Everyone is like family thanks to the Iowa-Connection. It helped me find all the people I looked up to growing up, and now I see it doing the same for the kids that were my age. We still have our annual sessions (spring session, summer session, River Rumble) like the Halloween session, which is coming up quick. If we are not working, I usually blade with my long-time friend Shawn Warndorf, my roommate Jepherson, Bruce Bales, Zach Gutweiler, Troydizzle, Caleb Smith, Aj Keane, and David Flores. For me the scene has changed a lot. All the people I looked up to and ran the Iowa-Connection faded away and now we are in charge of keeping it alive. We’re still having fun on our blades so that’s all that matters.

I’ve noticed you spending some time out in Kansas City recently. Who have you been blading with out there? And have you considered relocating?
Yeah, KC is like a bigger Des Moines. It’s real chill and there are so many spots it’s overwhelming. My buddy Corey Harwig is my KC connection. Super humble host and knows all the spots and everyone in “The Compound.” I would for sure move to KC. Chris Candia even offered me a spot but I just don’t have the money right now. Hoping for the future. I can’t help but grom pretty hard when I’m down there, being able to actually session with people I’ve been looking up to for years instead of being another face in the crowd at Bittercold. Haha.

Speaking of Bittercold, and maybe it just seems this way because we’re both midwesterners, but you seem like someone who really tries to make it out to a lot of events. Do you make an effort to compete often or do you go to hang out?
If I’m going out-of-state for a competition, I’m going to take a chance on competing. It’s fun either way. I’ve been trying to make it to as many as I can but it was easier when Brian Krans was renting vans and driving us to comps like the Hoedown in ’08. Krans drank this insane energy drink on the way back from that Hoedown and it was like a scene out of Fear and Loathing. He once drove to Kalamazoo for an indoor park comp that we thought was a Roll Series comp but it wasn’t. But I still got 3rd place, which was cool.

Your Bittercold edit was really successful at getting at the feeling of the event more so than a lot of the more professional edits that focused on tricks. Where do you think that approach came from? Who are some of the editors whose stuff you dig?
That kinda just happened that way. I wanted to blade and not worry about my camera or having someone hold it. In the end though I really enjoy how it turned out because it’s the Bittercold that you wouldn’t see unless you were there. And it just so happened that it was the last “Bittercold.”

I’ve always enjoyed Adam Johnson’s edits/videos. Ascensions was the first video I saw. So KFC has been on my radar from the beginning. Anything the mushroom bladers make is always fun to watch. I watched Better Than Baseball when I had a broken thumb and it helped change my perspective to enjoy the little things because I still had my feet and could blade, but I just couldn’t fall with my cast. The Colorado dudes have always had my attention and have been down with my blading as well. Ian Walker and Howie Bennett are the homies. Hoping to work on some stuff for El Chvpo II. Sean Kelso’s edits have been fun to watch since he and Colin were shredding in their basement. This list can go on and on but anything the Haitian and DRC dudes are doing has my attention as well. 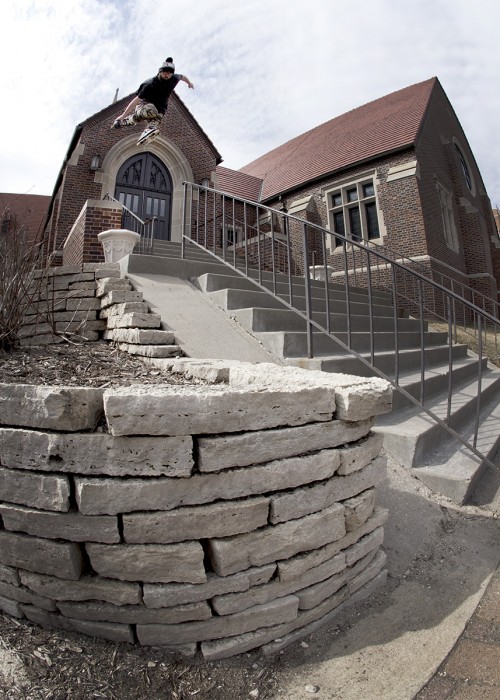 What are you up to outside of blading?
I’ve been working with Zach at his kitchen called the Hole In The Wall at the Gas Lamp. We serve high-end street food through our walk-up window and through the bar too. There’s nothing better than hanging out with your best friend, cooking food and having a few beers. Iowa is definitely not ready for his level of street food though but we have a pretty good following. We get all our food through local organic farms.

I also work full-time at a gas station in the “hood” of Des Moines. But you don’t want to hear bout that. 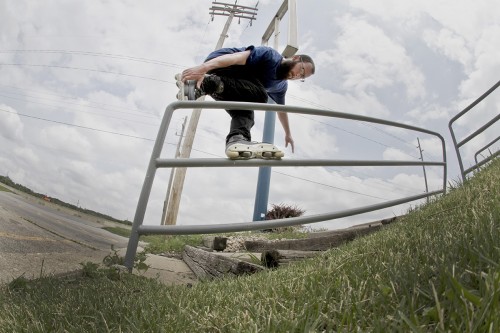 I definitely want to hear about that. What’s the craziest thing you’ve seen working at the gas station?
It’s overnights too, haha. Man, too many things that I thought only happened on Chappelle’s Show. I’ve seen people get shot at in our parking lot, a mob of like 50 people with two girls pulling each other’s hair out in the middle of it. I’ve had a prostitute give ME money because the dude she was with gave her more than she expected. I’ve been flashed by trannies and hit on by 65 year-old women. I once helped a police officer find a bloody knife outside from a stabbing (without a flashlight) and I’ve helped a mailman get his mail truck unstuck in the winter… just to name a few. 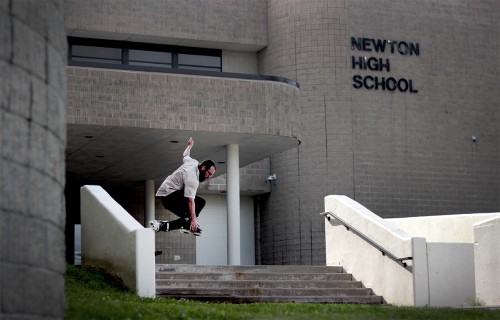 Makio to Fish / Photo by Bales

I always got the impression you kind of secretly liked drama. Let’s see if we can cause some. What’s the worst thing about rollerblading right now?
Haha, it gets the blood flowing. The worst thing about rollerblading right now? The shredders out there that are holding it down are not getting the proper support from the companies that are supposed to be supporting our sport in the first place. To the point where our pros/shredders are losing faith in it.

Do you have any sponsors right now?
No, I do not.

How do you keep from losing faith in all of this? Obviously you have been shredding for a long time.
I have fun doing it. It’s my getaway when I need it. After my string of breaks I definitely chilled out in a way. It helped me focus a little more and not just huck into shit. I stick to what I know and movements I enjoy. I just want to be able to keep rolling. It’s always been there for me. And everyone I know now I met through blading. I started blading, found bladers in Grinnell, one of them found out about the Iowa-connection, I met Jepherson, and Jepherson introduced me to you. Now we are doing this. That’s pretty dope. 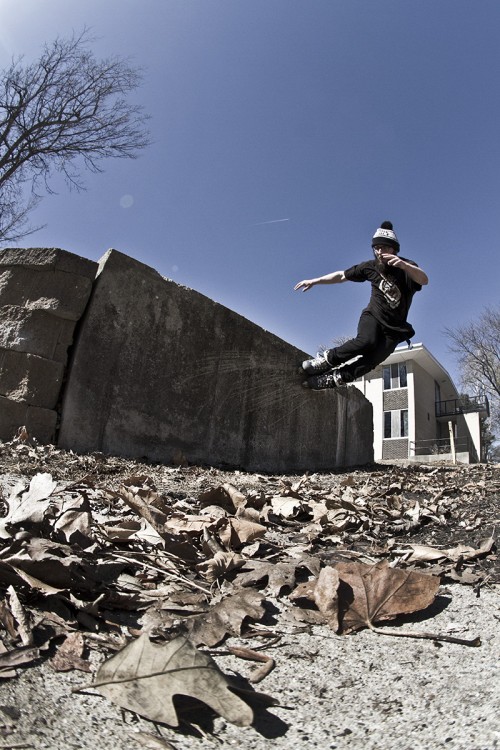 Gap to Wally / Photo by Bales

That is pretty dope. What was your “string of breaks?”
I didn’t break anything my whole life and 10 years into blading I broke my thumb on my favorite marble ledge after moving to Des Moines. Then I got on Remz and like a month in I broke my ankle/fibula. Got a plate and screws. A year later, broke my fibula again. Then about a year later, broke my ring finger/hand. It was like a chain reaction.

That’s fucked. On a more serious note, why am I wrong to not be watching Trailer Park Boys? And do you think your love of the show has anything to do with working overnight at a Des Moines gas station?
Ha ha, I don’t know why you are not watching it. But it is a bit fucky, I know. That’s what makes it so great, no’msayin? It definitely doesn’t have anything to do with me working at a gas staion. I hope. 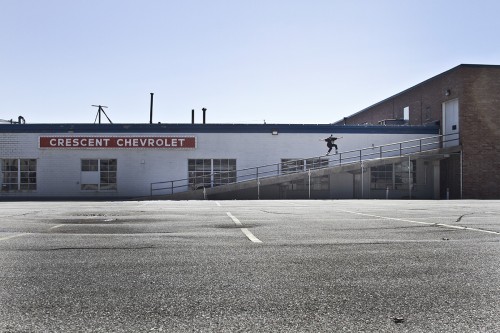 Shout outs?
Everyone with blades under their feet. My parents for never telling me that rollerblading is lame, Adam Morris, CHIowa homies, Kato, Bruce for the motivation and picture skills, Zach for feeding me, Shawn for sticking to it, Jepherson for being a Master Shredder. And everyone reading this. Come to Iowa.