Mike Torres has become a staple of the online blade video space over the last few years, thanks in part to his early adoption of the big wheel freeskating movement and a tendency to be very good at filming fancy footwork. But Mike’s story is of course much bigger and weirder than all that, so as a now firmly-established NYC resident, and with the release of his next full-length project “Nights & Weekends” on the horizon, it seemed the exact right time to find out more about Mike’s history and his life behind the lens. Enjoy!

Hey Mike, tell us when you started skating — and how long it took you to get a video camera.
What’s up One Blade Mag. I’d imagine I started the same way everyone else my age did — a pair of Wal-Mart blades for Christmas, a few years of skating circles in the basement, roller hockey in the neighborhood and jumping over recycle bins, before realizing an actual culture of “aggressive inline skating” had been brewing. Even after I got my first pair of real skates (Rollerblade™ Boxcars), I was convinced I was the only one in Rochester, NY that skated, other than my friend from middle school (more on him later). Reality set in when I attended my first Friday night at the roller rink since my newly adopted lifestyle as a rollerblading badass, thinking I was going to stop everyone dead in their tracks with my sick moves, only to find out that there were about 50 other “aggressive inline skaters” there and they were all WAY better than me. This was humbling, but it was also the start of a blade-renaissance for me since Tim Adams and Steve Bruning were among that crowd, and ended up teaching me all sorts of new tricks (along with becoming a couple of my best friends).

Now, about that middle school friend, lets call him Rick. Rick was known around our school as an actual badass. He played hockey, got into fights, smoked weed, all of the things that badasses did. We had absolutely nothing in common until one day I saw him in town on a pair of Rollerblade™ Tarmac CE’s. Suddenly we were friends, and my street cred went up ten-fold around school even though I was actually a wuss. The reason Rick is important is because after about two years of trying to figure out how we could film our very own skate videos, Rick called me up on my house phone one weeknight with some important news.

Rick: Just come over, I got us a Handycam.

Rick: I can’t tell you over the phone, just come over.

You gotta understand, Night of the String had just come out, so we were fresh off binging on Louie Zamora and Randy Spizer’s split part, and listening to “Phone Tap” by The Firm non-stop, OF COURSE WE THOUGHT THE LINES WERE HOT.

I told my mom I left something at Rick’s that I had to go pick up (I told you, I was a wuss, I wasn’t sneaking out of the house), and then headed over there immediately. When I got there he snuck me inside the two-bedroom apartment where he was raised. He was wearing black Jethro cargos and a black Senate hoodie with the hood up. He closed the door of his bedroom, then opened up his Senate backpack. There it was, a Sony 8mm Handycam… No box, no case, no owner’s manual, no battery.

Rick: I had to stay after school for detention today, so I took a different bus home. When I got on the bus I saw that they had removed the cover off of the BusCam, and it was just a Sony Handycam pointing at us. When I got off the bus I made sure to remember the bus number. Once it was dark I went to the bus yard, climbed the fence, found the bus, pushed the door in, and yanked the camera out of its holster.

And ever since that day I’ve been filming skating with my friends. 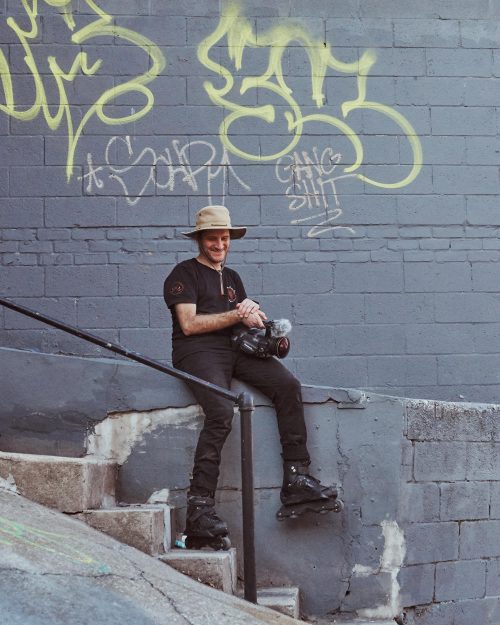 How many skate films and edits have you made over the years?
Full length, seven that I’ve completed and released. I have a few that I never finished. Countless edits though… I really have no idea.

How did that obsession take shape?
Damn, dude. Good question. I really wish I knew. I suppose it was a direct reflection of our obsession with skate videos. It was only natural that we’d want to create our own, but how that didn’t wear off after a few years is completely beyond me.

Without making you too crazy, what would you say are your Top 5 blade videos/edits ever?
In no particular order:
Hoax II
Brain Fear Gone
Volume (No full vids online but this will do)
Flip Flops
BIG WHEELS

How did those pieces you listed influence you?
Hoax II gave me idols to worship.
Volume/BFG redefined my understanding of rollerblading and what rollerblading videos could look/sound like.
Yada yada yada fast forward a few years…
Flip Flops dropped the machismo of rollerblading personas and wasn’t afraid to expose that side of themselves to the camera/audience. The Canadians had been doing this for years but for some reason this was the first time I noticed it.
BIG WHEELS was in your face and unapologetic (despite constant criticism from the ‘community’) and probably ended up being one of the most influential blade videos of the last five years as a result.

I constantly see influence from all of these videos in my current work.

Are there ways your time spent filing and blading and filming blading have improved your career prospects? If so, please tell us.
Yes, definitely. I’ve met so many talented people in my industry through rollerblading, and it continues to help me along in my career to this day. I imagine it always will.

What have you learned about filmmaking and videography from your time behind the blade lens?
I’ve fallen countless times filming skating, smashed a camera into the ground, gotten the lens/camera kicked a few dozen times, and gotten poked in the eyeball. Before and after each one of those incidents I wrapped the camera up myself, and carried all of the gear on my back to the next location. Nine times out of ten, filming skating will be more challenging than any job I’ll get hired to shoot, so I guess it’s taught me to roll with the punches (sometimes actual punches) and be grateful for any assistance I get.

I know you work as a commercial videographer, so you’ve used a ton of different camera setups, so out of all those, what would you say is your favorite? And why?
I’m a sucker for slow mo, so I’m gonna have to say the Phantom Flex 4K was the coolest camera I ever got to work with. 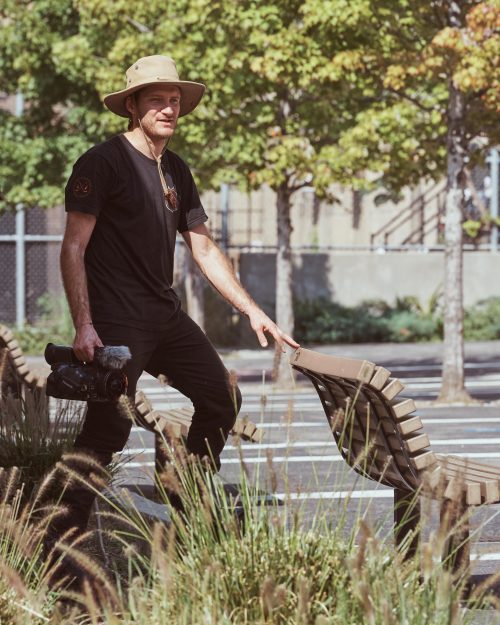 Now what’s the best blade filming setup for ya? What’re you using right now?
I recently bought a Canon C100MKII, but I’m also still rocking an HPX170 with a fisheye. This is still my favorite setup for filming skating for lots of reasons. Global shutter, solid body, great color, wide ass fisheye. It’s raw and beautiful at the same time. A few weeks ago I was filming with it and was thrown off guard for a second while filming a long lens rolling shot of Justin Brasco. For some ungodly reason I chose to put my eye up to the viewfinder to film while moving. Before I realized that I had tripped both my feet into a nearby ledge I had already broken my fall with my camera. The clip instantly turns bright yellow the second the camera hits the ground — I had undoubtedly done damage to one of the CCDs. It was the biggest bonehead move I had ever made while filming skating. I messed with every setting I could, and turned the camera on and off a bunch of times in hopes of some kind of sensor reset, but nothing was working, the image remained bright yellow. I don’t know what happened, but after about three hours of sitting in my camera bag the color had returned to my image, and it seems to be working again. The body is completely fucked though.

What qualities do you think make a great skate edit? How do you parse the difference in execution between a Dirt Box edit and something Dom West puts out?
Those are both really good examples because even though they are so different from one another, they both seem to leave me absolutely humbled by their quality and attention to detail. I love great camera work, whether it’s cinematic stuff like Dom West or Cayenne, or raw perfectly timed fisheye work like Dirt Box or Strange Creatures. But more than anything I just love watching thought provoking skating, and put much more emphasis on that than production quality.

Okay, well, I didn’t mean to ask so many questions, but can you tell us a little bit about each of your edits as we run through them?
The Church of Leon – Released in October 2017.

This was a follow up to “The Wizard of Wall Street.” We only had a three days to film this one. Fortunately we had a long talk while skating around the streets of NYC before we started filming and bounced a lot of ideas off of each other. This made it easier for us to focus on the type of skating, filming, spots, and tone we were trying to create. We wrapped filming on a Sunday and I was so eager to dive into the footage that I accidentally edited what ended up becoming the main part of Church that following Monday after work. Leon was barely outside of NYC on a bus when I sent him the first cut. It remained mostly unchanged.

It was my first traditional full length video in over ten years. I have another one on the way in the next few months. Same crew.

The Wizard of Wall Street – Released in December of 2015.

It was my first collaboration with Leon Basin. We filmed all around NYC over the course of a month, while balancing a day job and work travel.

Documenting a ten day trip to Vancouver, BC. It was the first project I worked on that was dedicated to big wheel/Wizard Skating.

This is a profile of one of my oldest friends, Tim Adams.

On Holiday – Released in July of 2014.
Documenting a ten day blade vacation to Puerto Rico with the boys.