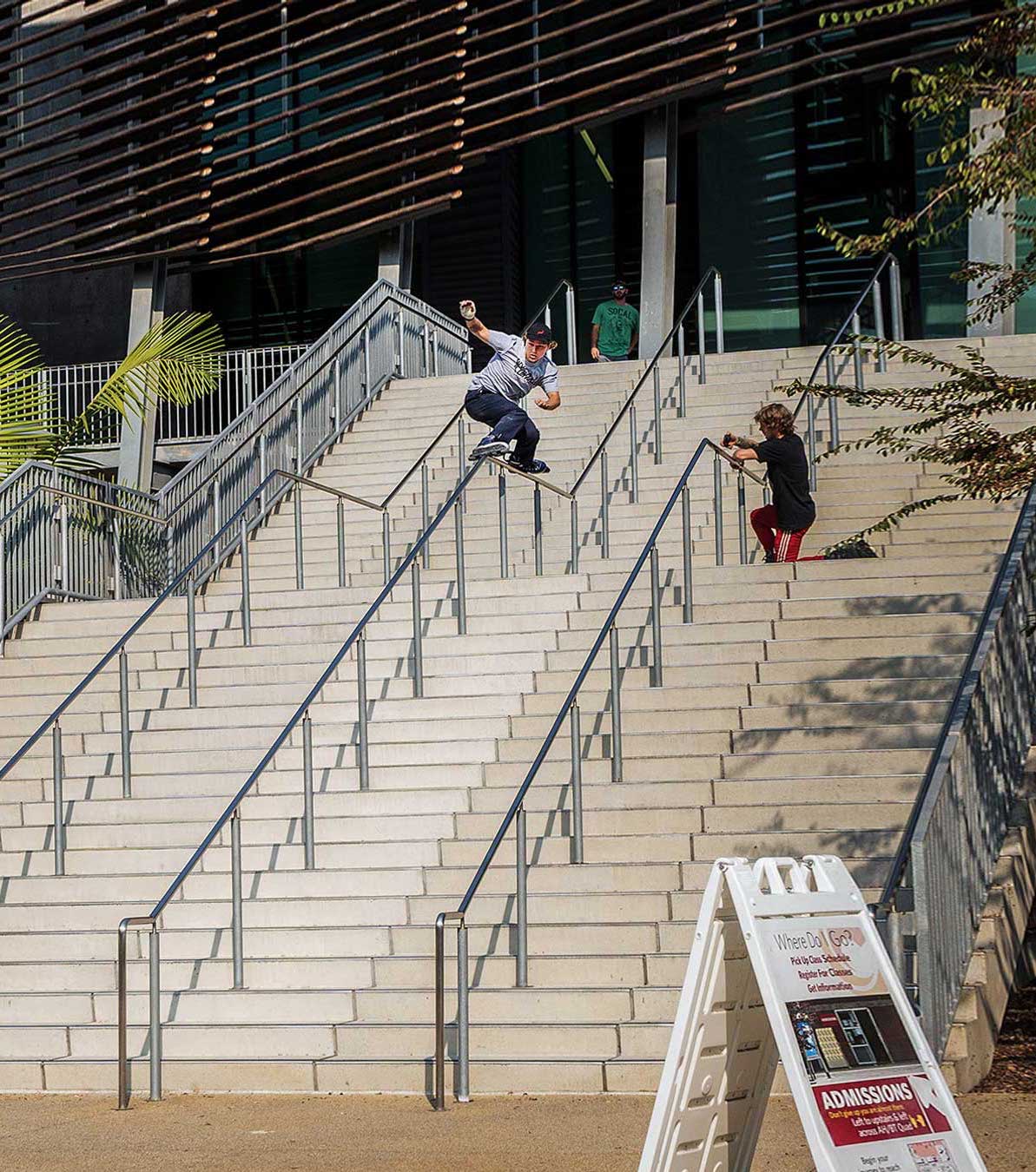 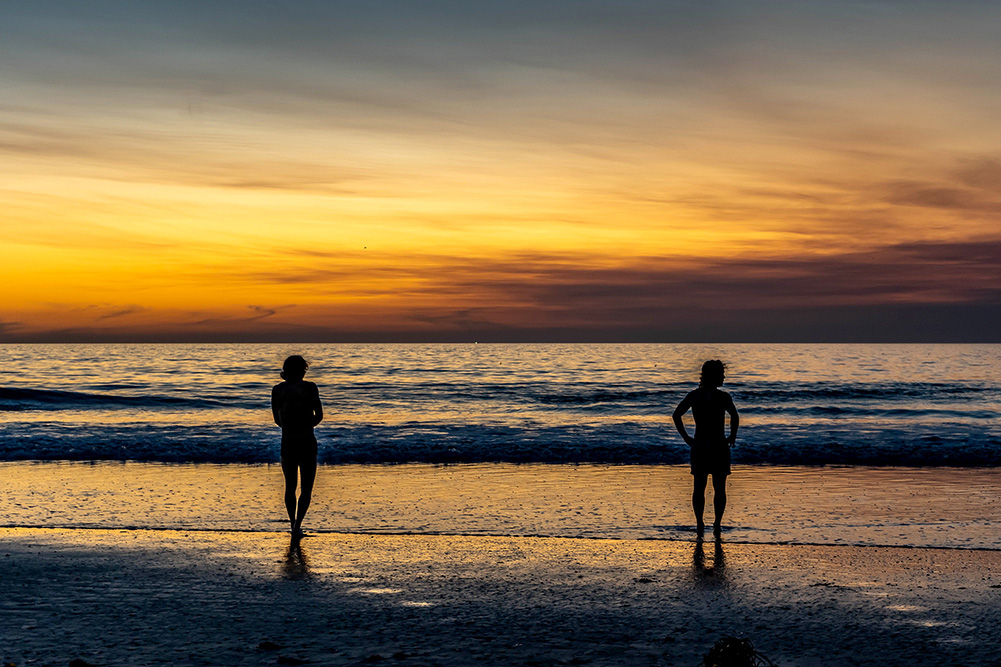 This year during Blading Cup it was amazing to see everyone pushing themselves and utilizing the course in ways I didn’t even realize were possible. Two people that stood out in my mind that day were Nils Jansons and Tomek Przybylik. Even after the event, I continued to check out the Instagram stories of the rest of their travels, and it looked like they had a great time at Woodward West and in Long Beach. That week I wondered if they’d make it to San Diego.

At work on Friday afternoon, I got a text from Chris Calkins telling me that he and Nils and Tomek were thinking of coming to San Diego for the weekend, and they were looking for a place to crash. After thinking of the logistics of having people staying with me, and the responsibility that entails, I figured I could handle it and agreed to have them crash at my place.

To my surprise, when they got to my spot, they still wanted to skate, so I took them into downtown San Diego. The first spot I wanted to show them was San Diego City College, It has been in countless videos since the beginning of skating, and it’s got enough light to skate in the evening. Unfortunately, we got seen by the police, and we were escorted off the premises within minutes of arriving at a heavy kinked rail. 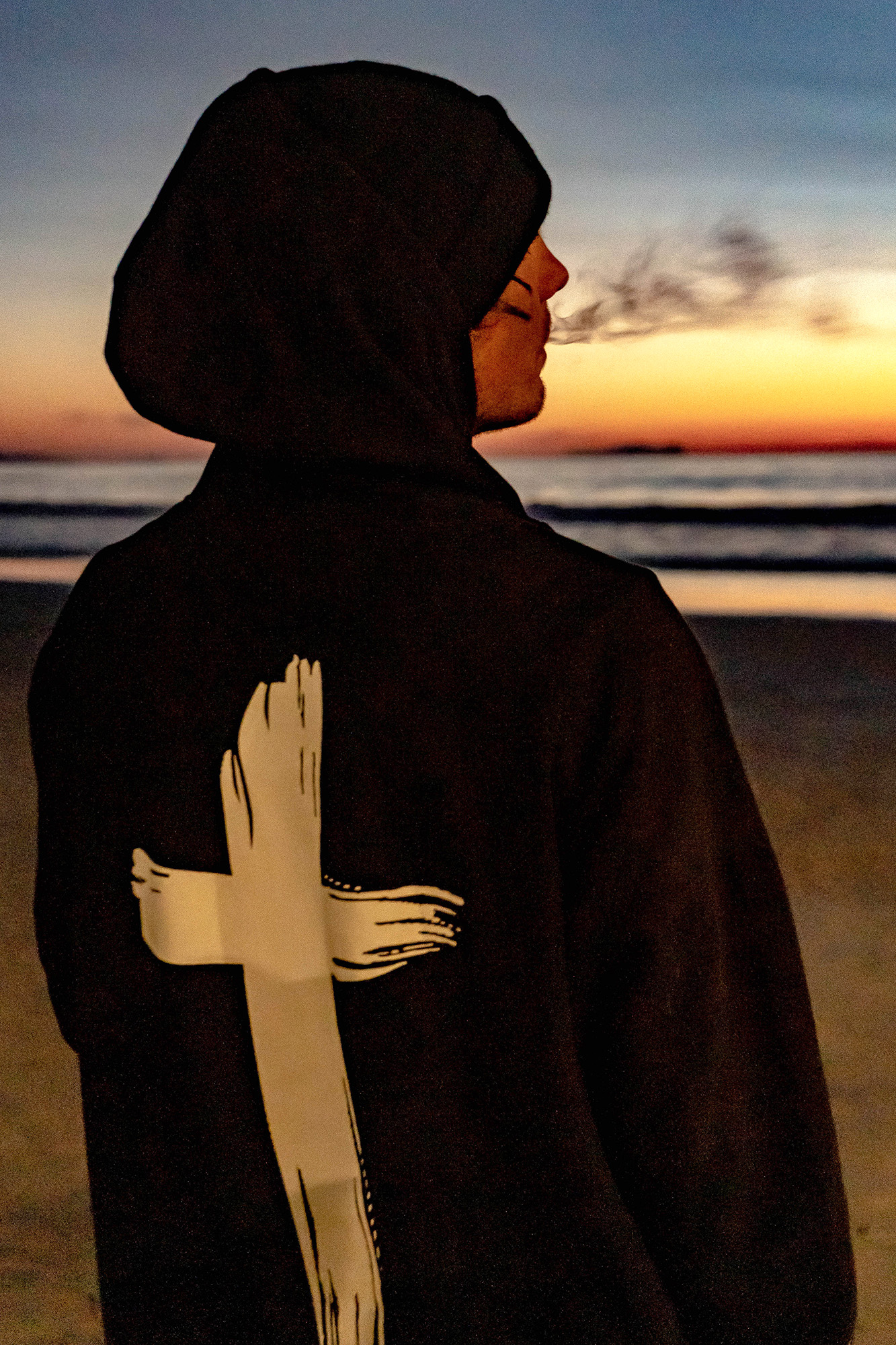 Undeterred, we jumped back in the car and headed for the Civic Center, which has a parking garage and some ledges that have been in “Leading the Blind,” and a few other videos. It was a good time, and then it got even better when we went to the top of the garage and randomly met up with long boarders who were bombing the parking garage too. See Nils Janson’s Youtube channel for the clips of that adventure.

The next day we met up with more San Diego locals at the newest skatepark, City Heights, and waited for the rest of the crew to show up. From there we met up with a few of the Long Beach/Los Angeles skaters that Chris invited, and we had a massive session in the Chula Vista ditches that Chris Couture found awhile back. Then we went to some ledges closer to the border and had some more fun. 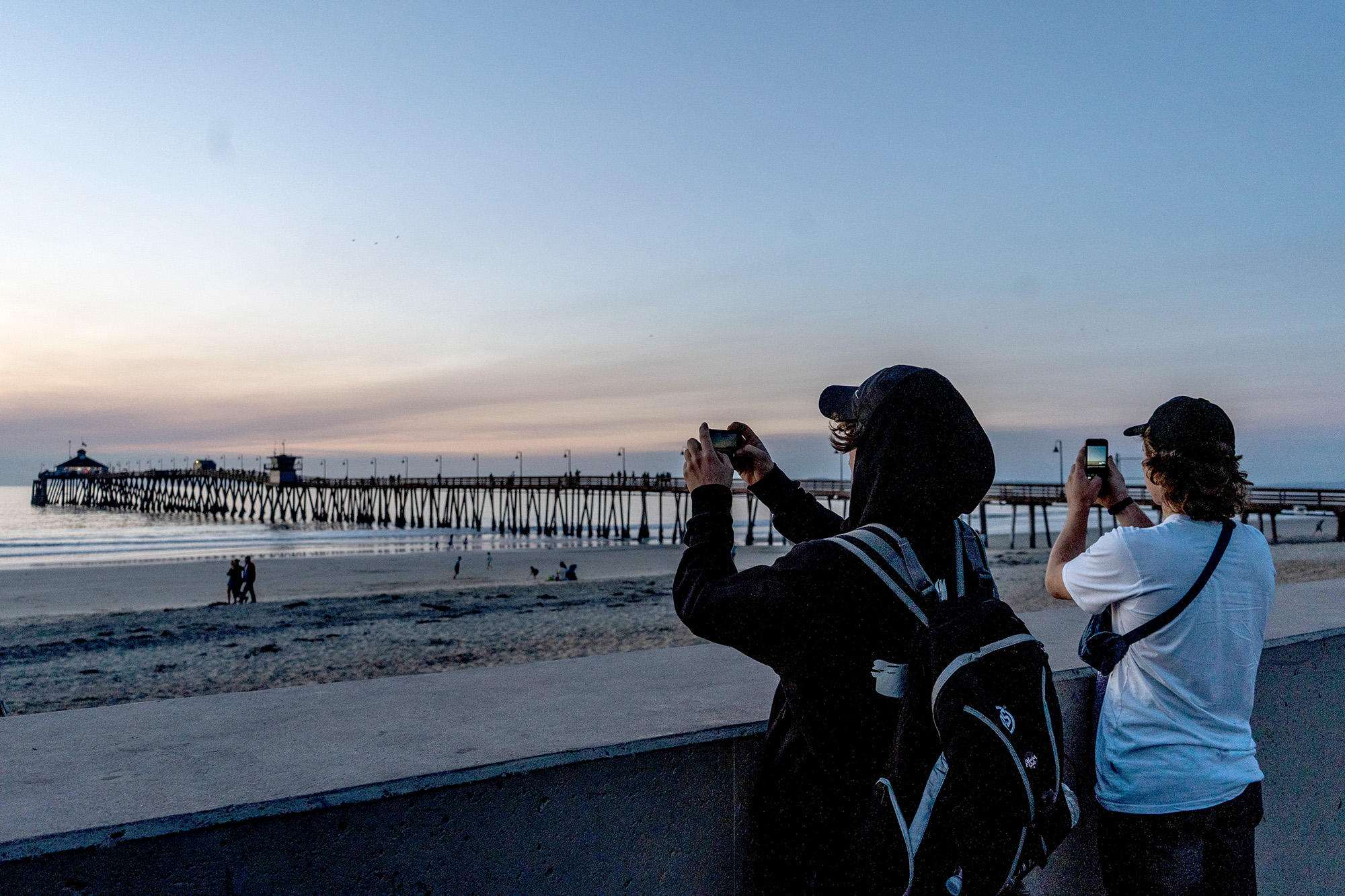 Towards the end of the session, Nils and Tomek had a great idea to head to the beach, so we said our goodbyes and raced against the sun to catch a sunset over the Pacific Ocean at Imperial Beach. Both Tomek and Nils had some ritual stretching and elated jumping with excitement before running towards the ocean like the actors on “Baywatch,” only to slow down as they realized how cold the water was. Slowly they made their way out past the breaks and then ran back up to the beach to get their clothes back on. After shivering and throwing his sweatshirt back on Tomek burned one down as the sun dipped behind the horizon. Nils stood mesmerized by the beautiful colors of the sunset and ocean view obviously humbled by the vastness of the scene and calm breeze of the evening. Chris and I laughed as we both realized how spoiled we are to live in Southern California. I decided to take the scenic route home and take the boys over the Coronado bridge, which is a vast arched bridge and gives a great view of downtown San Diego. 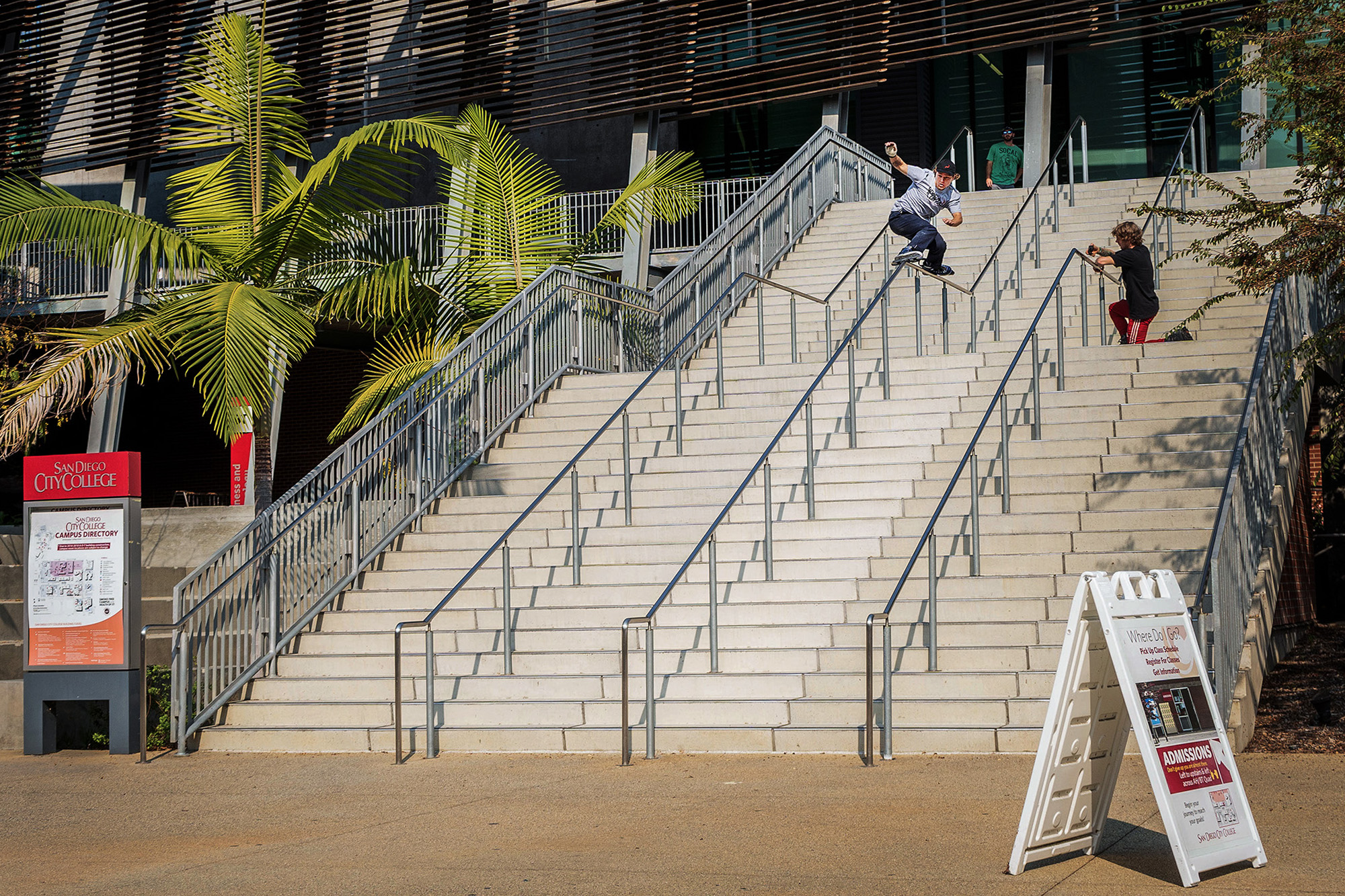 “Kinked rails for breakfast” was the theme of the last day of the trip. We decided to grab some coffee and vegan donuts to start the day. Initially, the guys wanted to skate the famous Dallas St. kinked rail. However, we were going to go to San Diego City College so Nils could do the rail that he had seen on the first night of his visit — the opposite direction. So the plan was to meet up at the college and then go from there. Everyone met up and Nils got his clip, and we were going to jump in the car and cruise when plans changed, and we were on our way to a parking garage that was right in the middle of downtown. 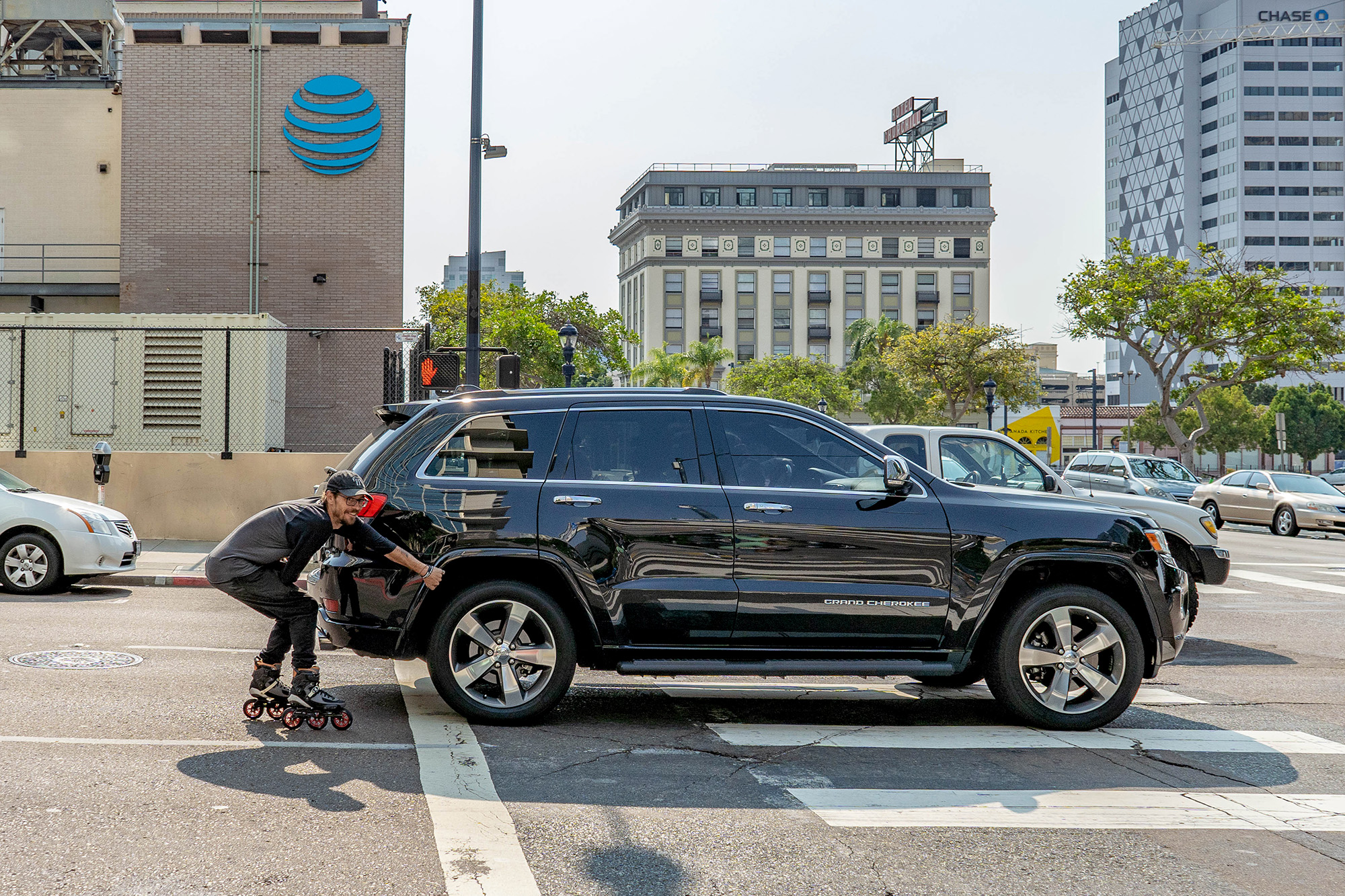 From there we did a tour of the city on our blades and ended up near the ballpark for Tomek’s trick, which nobody had even thought of. Unfortunately, Tomek hit his shin hard, and everyone was getting tired, so we called it. We skated back to our cars through the city and said goodbyes 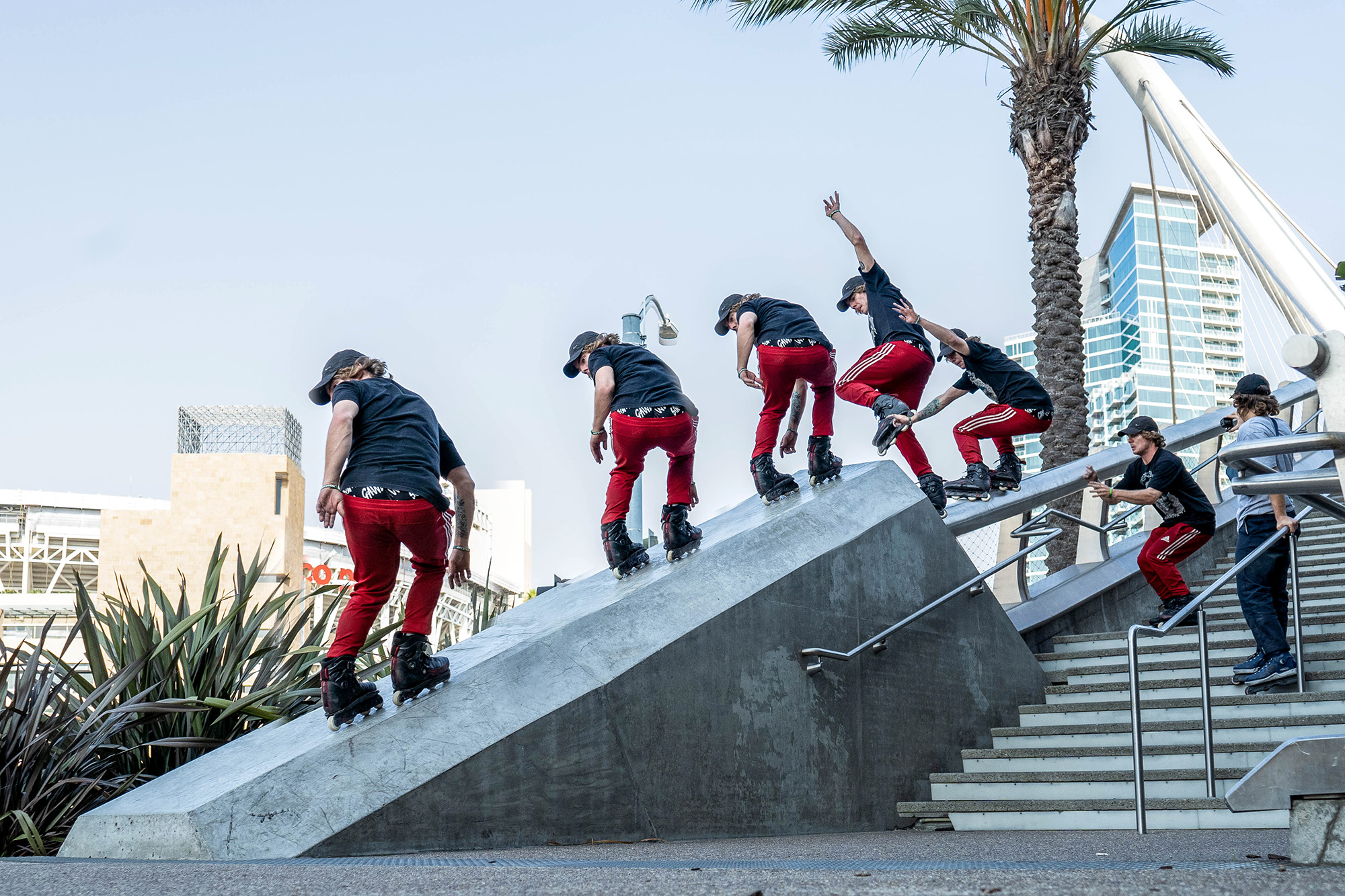 Takeaways from their visit:

• When given the opportunity to help out a fellow blader, even if it means a small inconvenience to one’s normal routine, do it! Embrace the new experience with an open attitude and don’t worry too much about the little things, but be prepared to accommodate the wants and needs of the visitors.

• When skating in a group larger than a few people, make a plan of spots and do not deviate from that plan; deciding where you are going to skate at the moment can work at times, but it’s always better to have a tentative plan — especially when time is limited. Too many people wanting to skate different obstacles, or get their clips, can kill a session unless everyone agrees that’s what the group is doing.

• Lifestyle habits, such as eating healthy, stretching, and staying focused, are important in order to have longevity in blading.

• Taking time to go to the grocery store for food is not only a good way to save money while on a trip, it also keeps you from eating food that is less than ideal for the body and mind. I saw Nils and Tomek stick to their healthy eating routine whited helped them to skate all day.

• Stretching, it’s not the most fun thing to do, but it helps. And if the best professionals in the world are stretching on a daily basis, that’s something I would like to adopt as a daily practice.

• Stay focused on the goal for that day. If that goal is to do a massive kinked rail then do it first thing in the morning. If you want to be creative and do a trick that looks nearly impossible, do it.

I welcome this change in mindset for professional athletes in our sport. In my opinion, it can only help make us look more professional to have healthy habits that show we belong on the world stage showcasing our talents, personalities, and character. We are growing up as a sport, and individuals like Nils and Tomek are leading examples of the new professional. Their healthy lifestyle habits help them accomplish their goals with effortless precision and style.