The lines between “street” and “freestyle” blading continue to blur, and recent LA-transplant Sam Houston is a purveyor of those dark arts. Switching between a number of big wheel set ups ranging from 4x80mm to 3x125mm, watch as Sam cruises around parks and spots with high speed and fluid moves ripped from all disciplines of blading. Repping Flying Eagle skates in this edit by Jeff Linett, check the movement and learn more about this Atlanta-born blader that’s managed to put his skates down all across the U.S.A. Enjoy!

Hey Sam, tell everyone who you are and where you’re from.
I’m Sam Houston, 28 years young, born in Atlanta, GA and raised there until about 15.

Where have you skated?
I started skating Atlanta in the Skatepile days. Rampage skatepark was my second home once I found aggressive skating. Being so close to influences like Jon Julio, Tom Hyser, The Raser Twins, Andy Kruse, Robert Guerrero, Julian Bah and David Sizemore was exhilarating as a youngster.

Then I moved to Anchorage, Alaska, and would shovel spots and ice melt them for days in order to keep skating. Rodney Glenn and Chris Latta were two guys who I looked up to and kept pushing me through those rough years.

Around my 20th birthday I up and moved to Philly, and man… Do I love that city! So much soul, so many amazing bladers! I specifically loved skating with the Kelso’s, Steve Iacono and Ed Braxton (the nicest dude!). Work brought me to the Bay Area, and as much as I wanted to, life made it hard to skate. Now I’m in Los Angeles and blading is back almost full force. 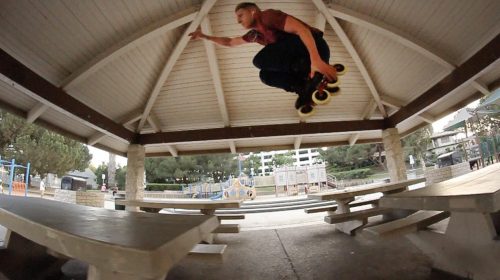 Your work day just wrapped up, how was it? What are you doing these days?
Work was fine, I enjoy what I do so that helps. I’m a supervisor for the bar program at a place called Gwen. Outside of work I enjoy painting and art in general, but spray paint and acrylic are the medium I’m involved in currently. Beyond that, I’m just enjoying the sunshine!

You once rode for RB?
So I was a flow rider on Rollerblade for awhile, yes. While I was still in Alaska skating my frozen heart out, Richie Valesquez contacted me about meeting up when I was visiting NYC. He asked me to join them on an East Coast tour and attend a competition in ATL. The whole experience was very surreal for me at that time and pushed me professionally and athletically.

How do the 110 and 125 wheels feel on gaps and basic skating in comparison to 80mm?
So, as you may imagine, there are huge differences between the wheel sizes. Each of which has its own benefits. The 125mm wheels are effortless when gaining speed quickly and offer fast cruising speeds. The 110’s are perhaps my favorite, they can stand up to about as much impact as smaller aggressive wheels, but have a much faster roll. As far as 80mm goes, I prefer the Slider 80mm set-up when pushing my skates to perform more aggressively or pulling off crazy wheel slides. 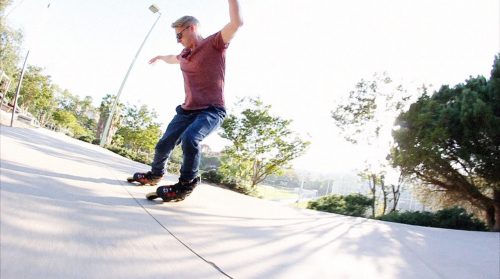 It looks like you’re solid on every set up, which is your favorite?
That’s tough, but I suppose the comfort and freedom of my blue painted Flying Eagle F7’s with 110mm wheels.

How are the LED Wheels? Have they held up on gaps?
I’ve found out that the LED’s are very useful when skating at night. They are a bit harder and not meant to be taking gaps and the abuse I give them, but they are holding up surprisingly enough.

Whats with the grinds? With no soul spot, do they grind well?
I don’t know, I can’t help but want to push myself and look at skating in a challenging way. Sometimes when I’m on these (very new) style of skates to me and I see something I want to do, I acknowledge that this is not what they are meant for… but, “What if I did something really cool I wasn’t supposed to?” lol. I have made some minor adjustments to frame positioning to help with the grinds, but they are still far more difficult to pull off than one would think. So when I do execute some of these grinds it’s like I’m just learning again, which is motivating. It opens up possibilities with the future of blading, and further builds the bridge between these styles of skating. I am punishing these Flying Eagles, but I love the response and comfort like no other aggressive skate I’ve had, so I will just have to learn how to makio a different way.