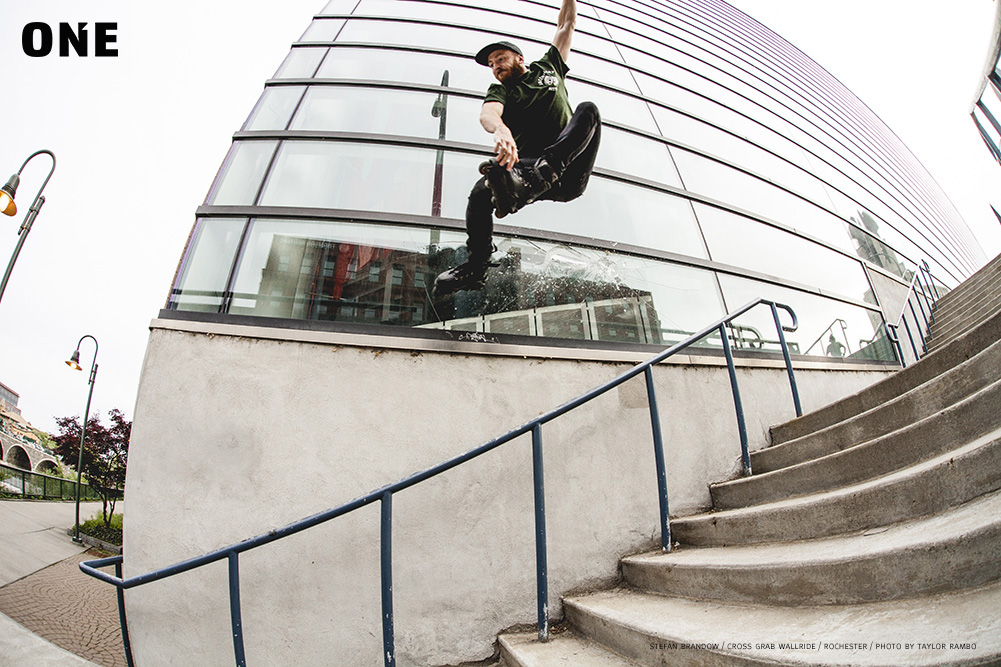 Stefan Brandow is a hardworking, circle pittin’, cess sliding mother fucker. Whether he is designing logos for bands or blade companies, Stefan is 100% dedicated to his artistry on and off his skates. Brandow has wandered from state to state for a few years in search of many things, but luckily we were able to pin him down to talk life, blading, and more.

Alright, Stefan, so where are you from originally?
I am originally from Bath, NY. A very small town in the middle of nowhere. About an hour south of Rochester, NY. 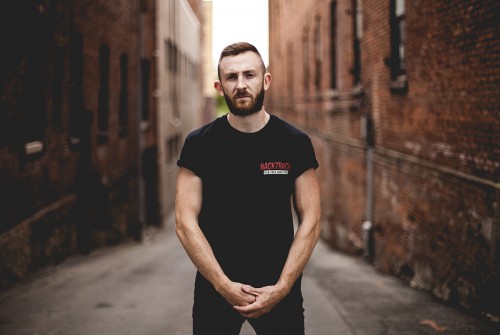 Where have you lived since then?
Three days after I graduated high school I moved to Pittsburgh, PA. I lived there for four years. Came back to NY for a few months to prepare to move to North Carolina. I lived in Charlotte for six months, then Raleigh for a year. After that I came back to NY again, then moved back to Pittsburgh for a year. Now I’m currently traveling as much as I can, staying at friends’ houses.

Fucking vagabond! Now were those moves skating related?
None of them were. Recently I had tried moving to Columbus and part of that was because I’m such great friends with everyone that skates there, but no move I’ve made has ever been specifically for skating.

So why have you moved/traveled so much in the last six years or so?
Short answer is I have a bad case of “wanderlust.” If I’m not completely happy in a situation whether that be job, apartment, city, relationship, I do what needs to be done to make myself happy and sometimes that means going somewhere different or new.

Fair enough. Let’s talk about sponsors and the design work that you have done for companies. Which came first, deign or sponsors?
Design actually led to my first sponsorship. I was doing some design work for The Conference which turned into a flow spot on Deshi. I’ve been blessed enough to be able to do design work or be involved in some aspect with almost every company I’ve been involved with. 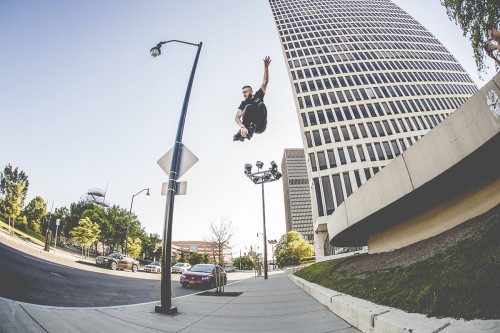 Who are your current sponsors and are any of your designs available with those sponsors right now?
I ride for Razors, Scribe, and Oak City Skateshop. I’ve done the past two Razors t-shirts. I’ve done a few Scribe wheels in the past. I believe the AM Team wheel is still available at some shops. I’ve done multiple wheel and t-shirt designs for Oak City. I’m also working together on something new with Chad Anthony and Southern Scum that I’m super excited out.

I think Cheap & Free was one of the first edits I saw of you. Since then, I’ve noticed that there have begin to be slight variations in your style/sections based on the music you are listening to.
Music really has been a main factor in what I do and how my skating is perceived. Which for me, change in music taste was a natural progression. I grew up with my parents listening to classic rock so that’s how I originally got into punk and hardcore. Then after high school that scene started either putting out things I wasn’t interested in or the bands I was into started breaking up. That to led me getting into a lot of electronic music in college. As I moved to North Carolina a lot of the people I was hanging out with were into hip hop or were artists themselves. The past couple years hardcore bands have been putting out music I love again. It’s been nice rediscovering my roots and first passion of music. It’s also nice to be a part of a scene that’s so positive and welcoming. It’s a lot like rollerblading in some aspects, and a lot better in others. 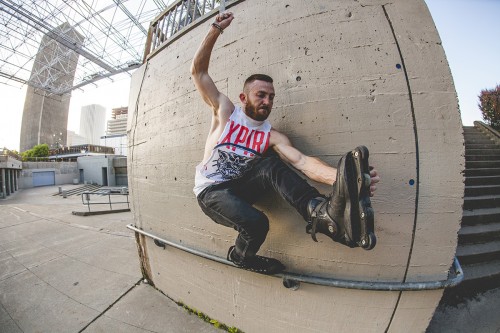 What else inspires your style?
Aside from hardcore, I get more inspired by snowboarding and bmx edits. As rollerbladers, when we watch edits we know the tricks and variations and body movements. When I watch other sports it gives me inspiration I wouldn’t find in skating. Especially those two because they go big and do stunts, which is what I enjoy doing on skates.

Now we hear a lot of entitlement drama now a days. “I deserve this, he should be paid more” bullshit more or less. And I always like to use you as an example to whiny bladers “It’s rollerblading, if you want to get paid then you should fucking work like Stefan does.” So what advice do you have for riders, as to how they can become more valuable to their sponsors?
I appreciate that, because I feel like I’ve gotten very lucky and been very blessed with all the things I’ve done and have had happen. Sometimes things that I feel like I don’t deserve. Anytime I make something I feel like it’s not good enough. I always want to do better. My best advice is to “do you” and be communicative. Riding for and representing a brand is a two-way street. Both parties have to hold up their ends of what is expected. 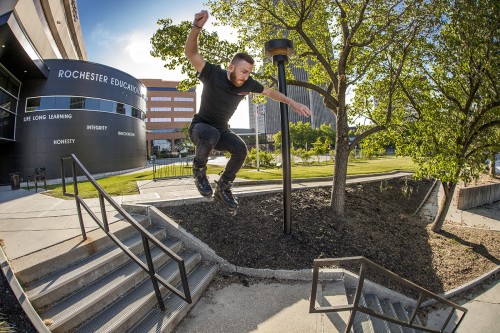 Now since we are talking about work, I understand you have a new apparel company as well right?
I had a clothing like called Lumen for about three years. I was doing a lot with bands and was supposed to take it on Warped Tour with a band we supported. For a few reasons I decided it was best to stop doing that, and start something new. Outward Supply Co. is what I wanted Lumen to be originally. A more vintage and outdoorsy feel. Classic, simple designs. And the idea behind the brand is to get people to go outward. To go explore. I work so hard that I sometimes forget to go do things I enjoy like hiking and exploring.

Will skating ever be involved with it?
Skating will never be involved. It’s really nice to have interests outside of skating. You have to have a balance. And we all know how fickle and unreliable our industry is. Plus, I’m working with Chad Anthony and SouthernScum on a rollerblading project. 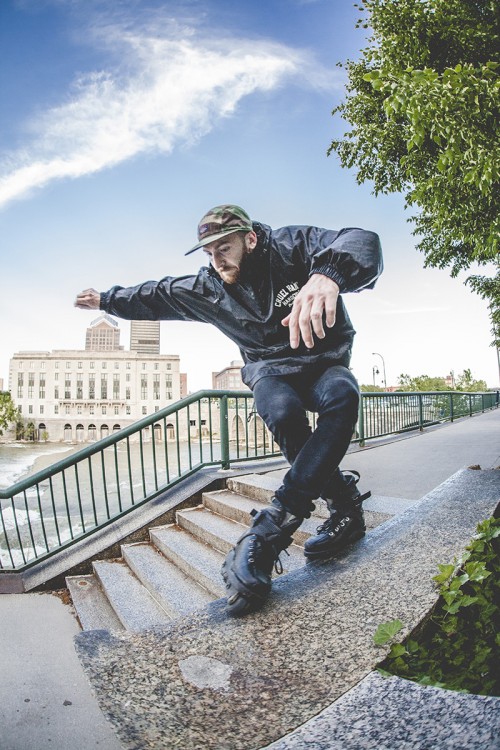 Shout Stefan, shout.
Huge thank you to Taylor Rambo for shooting all these awesome photos. I met Taylor at a show in Cleveland and we had no clue we were from the same area. He’s always shooting all the shows I go to, and I’m super glad he was hyped to shoot some skating too. Huge thank you as always to my parents for supporting me wanting to skate from day one, Geoff, Mac, and Andy at Razors, Dan at Scribe, Long at Oak City, and Chad at SouthernScum for all believing in me and my skating.

Shout to Cavin for letting me help him on The Life and Death Tour, my Erie music crew, Rochester/Columbus/NYC blade crews, all my friends from all over the world, and last but definitely not least, Chris, Justin, and ONE for this piece. You guys all rule.