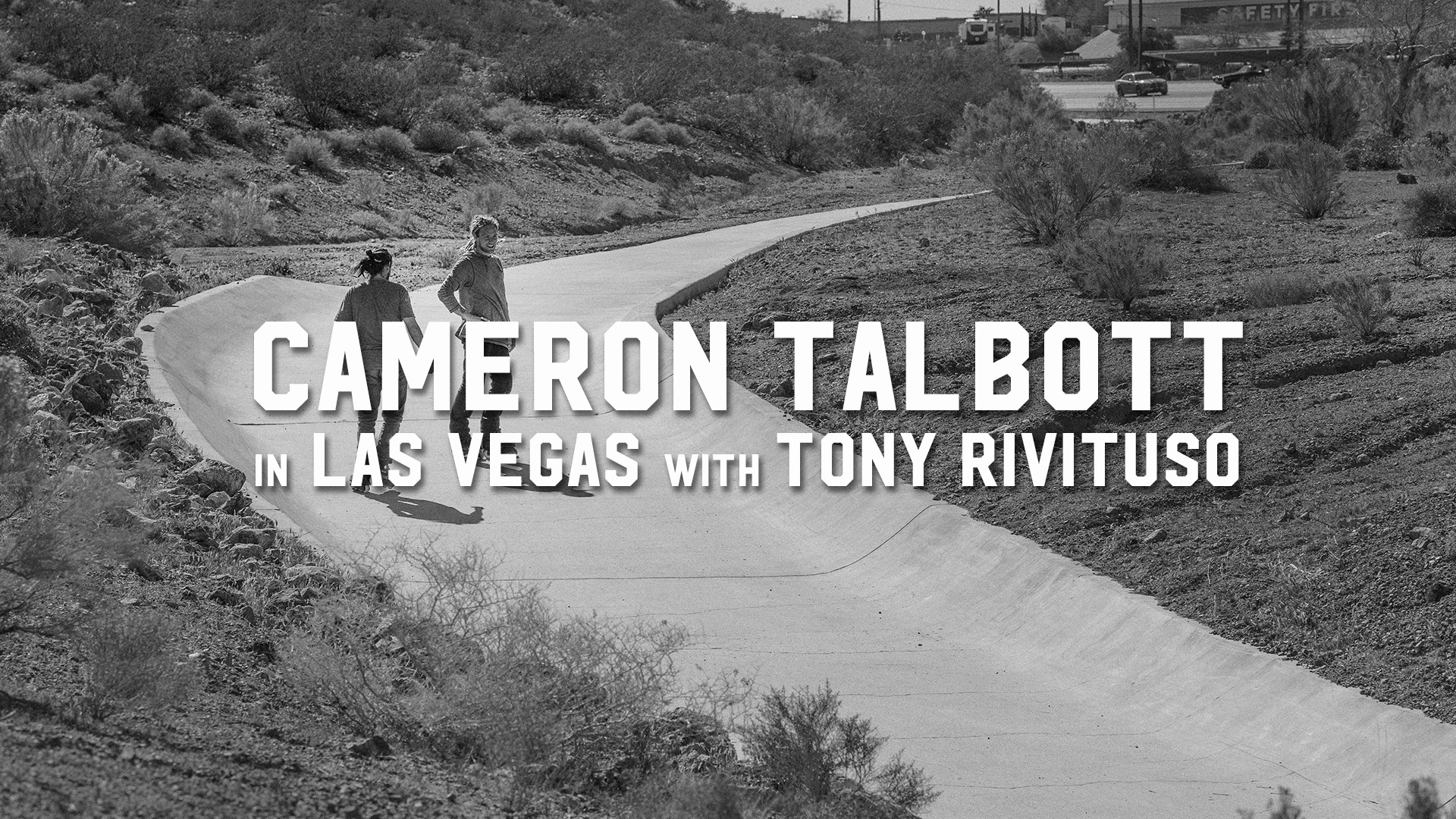 Sometimes things just work out the way they’re supposed to, give or take a smashed face. Because other than Cameron Talbott slamming himself into a concrete bank at high velocity, the impromptu and otherwise random trip to Las Vegas to meet up with Tony Rivituso and Drew Humphrey came together as planned. See, what started with Drew booking a ticket to Vegas was followed by Cameron deciding to come south to San Diego… and the rest can be read and watched and seen below. A big shout out to Tony for all the hospitality while we prowled his town, and a big “jah bless” to the angels that kept Cameron as safe as they did, all things considered. So remember, be safe out there everyone — and enjoy!

Cameron, what’s new since you headed back to Montana? The weather showing any signs of breaking?
After that trip I’m just kinda chillin’ and healing up, doing a lot of hiking with my pup and enjoying the sun when it feels like showing itself. Haha.

So if I’m correct, this past outing was your first trip to Southern California — is that right?
Yeah, first trip to SD. Been to L.A. a few times but not much further south.

Well what brought you down this time?
Just came down to bug you, eat some good food, hang with some good folks, and do some skating. 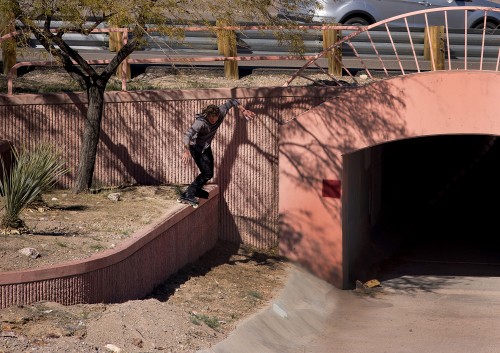 But instead of hanging out in SD I immediately took you to Las Vegas. Ha! How was that?
Vegas was fun for sure. We met Drew (Humphrey) and Tony (Rivituso) out there for some fun in the ditches, then I took a hard fall to the face during the second day of skating which was a bum deal. But regardless I still had fun seeing the sites and hanging with all you guys. Walt Austin was an awesome surprise for me. I’m a big fan.

Yeah, when you slammed your face we got a good scare. Does that kinda thing happen to you often?
I’ve had some good falls in the past, but I had two pretty serious ones in less than two weeks. I can’t say I normally get so beat up in such a short time, but it happens. I’m grateful I could at least walk away and heal up to skate again! 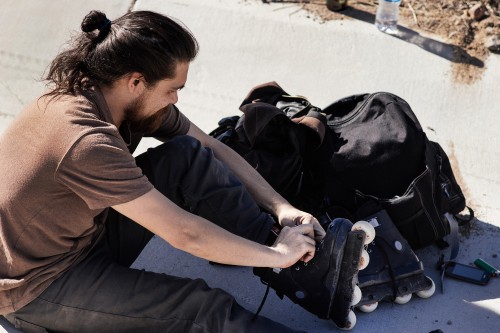 True story. What other shitty things like that have you had to deal with?
Ah man, I’ve had my share of broken bones, bruises, and gashes over the years. The more we fall, the better we get – right?! But yeah, in SF the week before I hit my head, I dislocated my thumb so far out of whack the bone came through the underside of my thumb. I didn’t even realize until the doctor brought it to my attention after blading all the way to the hospital! After falling, when I saw my thumb not where it should be I just skated to the ER and didn’t look at it again! 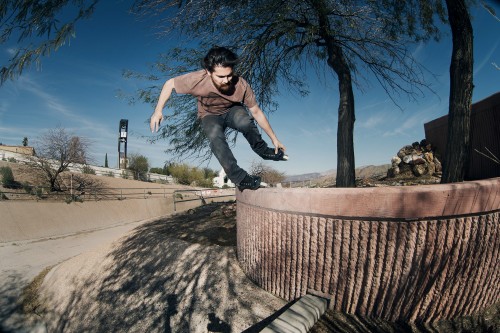 Now that we’ve got that gore shit out of the way, did you have a good time on the trip and in SD?
I had a damn fine time! Good company, good food, rad city in general. Despite my injuries and not much skating I still really enjoyed myself. Even took a little side trip to Mexico with my bud Logan! Good times! 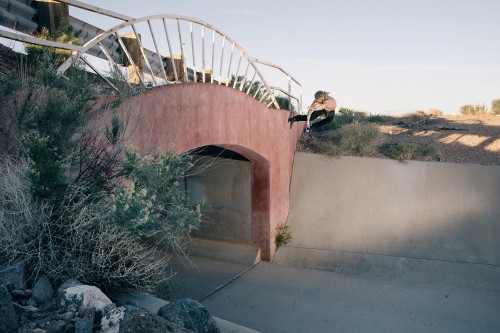 How about terrain in Vegas? We went looking for ditches and Tony hooked it up. What is what you expected?
Yeah, the ditches were so nice and smooth. Tony knew the spots and it all played out really well I thought. I’ve got to go back soon and stay longer!

How did San Diego differ from your time in SF and other places, both blading and not blading?
Time in SF was full of family and friends. I mostly chilled and let my thumb heal a bit before heading south. SF is one of my favorite cities to explore for skating. Chilling there is great, too. I have a ton of homies from back in the day and family in the area, so it’s a bit of a homecoming when I get back. Everywhere kinda has its own feel based on your experiences there I guess. SD was a good time, I did more chillin’ than skating and I was totally fine with that. Tons of stuff to do outside, good mix of people, good food and weather. The spots were way fun and I know I barely scratched the surface. You guys made me feel welcome for sure! 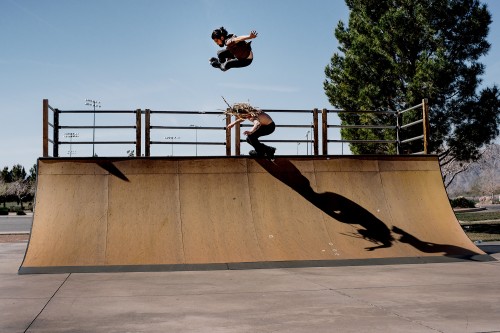 Last time we spoke you’d just joined Team Rollerblade, and it seems like that’s going pretty well. Did you have any transition hurdles to overcome getting used to a different skate?
Hyped to be part of RB for sure! The skates didn’t take long to get used to at all. I really like the dual strap system with a hard boot, super solid but still has enough flex. The new Blanks liners are really awesome!

Do you skate your Solos stock, or do you customize them at all?
I skate them stock with the Blank liners and frames and Circolo wheels. I mix up straps or souls here and there. 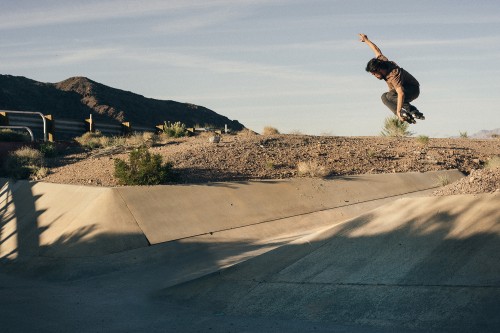 What would you tell anyone considering trying RBs that hasn’t skated them yet?
If you like a solid, affordable quality skate you can’t go wrong. Haha! Not to sound like a salesman, but on the real the new Solos are awesome.

Changing gears, you somehow conned the NWST to head to Montana this year — how did you do that?!
Haha! I’m hyped on it being in Montana! Last year Preston kinda threw out the idea of mixing it up and trying somewhere new, but still somewhere in the northwest, and naturally suggested Montana.

What should people expect in Missoula as far as camping and parks and all that?
Missoula is a fun place. The skatepark is on the river right next to downtown, so there’s tons of swimming and fun stuff to get into within walking distance of the park. Camping will be interesting, since there are spots to camp as a group and also spots people can crash at along the river near downtown. It’s a river/mountain town with lots to see and experience if you’re open to it.

Fastplant to Soul to Safety Drop

Geez, what else could we talk about? Do you have any plans to head overseas again any time soon?
Possibly this coming winter but nothing is set in stone. For now I think I might do a little wandering stateside, might end up in SF for a while. (Spoiler Alert: He’s there now!)

All right, I can’t think of anything else to ask (Read all our other interviews with Cameron HERE.) so let me get stupid: If there were a BL8 GAWD and s/he could grant wishes, what would you wish for?
Oh man, haha! I guess if I had one wish, it would be to allow anyone that owns a pair of blades free travel for life. That way we could all visit each other, skate, and explore this amazing world together. 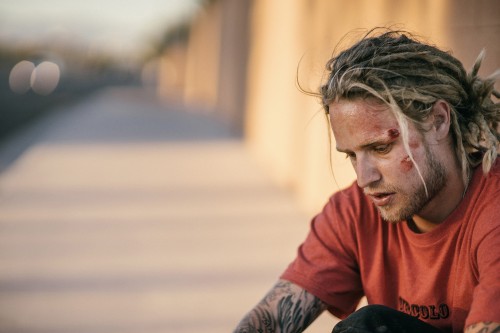 Moments after the accident

Okay, amazing! And I can’t think of a better place to wrap up, so throw out some THANK YOUS and let’s wrap this up. Catch you next time, dude!
Wanna thank Jenn and the B for being so welcoming and hospitable while I was out there! And Tony, for just being a rad human and showing us around the Vegas area. Tom, Jeff, Asmo and all my friends and family who’ve shown me love and support — much love!