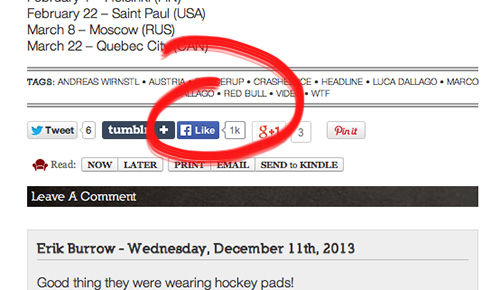 1,000 Likes or… How I Learned to Stop Worrying and Just Love All Sorts of Blading

Ever since just around Thanksgiving when I wrote that goofy “Top 10 Reasons You Quit Rollerblading” article, we’ve seen some pretty big spikes in Like button activity.

Sure, some of it was expected — look at the posts. It wasn’t an accident.

But then something weird happened. A post that maybe shouldn’t have even been on ONE dropped and got 1,000 Likes.

What is that about?!

I have a couple theories.

First, I shared the link on the Red Bull Crashed Ice Facebook page. They have like 88,000 Likes, and they bumped the link over into the timeline and Highlighted it… but it didn’t look like it had a lot of Likes on its own. But I’m sure that drove traffic.

Second, the stars of the edit and interview, the Dallago brothers, posted it on their fan page. But that has less than 700 Likes, but no doubt reaches the targeted audience.

Third, and this is the surprising one, is that a lot more of you core ONE readers Liked that post than we would have ever expected.

And that’s also the most interesting thing to consider. Thinking about it more, I started to develop a theory. A theory that led to this FB post:

We’re amidst a convergence that’s taking place all around us. Can you feel it? #justblade”

What I mean by that is that look around: I dunno about you, but I see a lot more references to blading, people blading, and overall awareness that rollerblading exists than there’s been in a long time. But maybe not in the punk-rock, die-in-the-streets, shit-your-pants-and-not-care way that you are so desperately hanging on to.

It’s much more benign than that — which is why I think it’s important to notice. Blading is kinda pulling a “Kaiser Soze” on culture. People think it’s gone. Powerless. But that makes it invisible, and invisible things have a way of sneaking up on you. Invisible things can get close. Let your guard down.

And that’s kinda what’s been happening. Wake joins Chris on Nitro. Jaren and the show blading crowd are as busy as ever. Eito’s been demoing at schools for like two years straight. TV shows. Cartoons. Jokes. Fitness. All over the place, blading is popping up again.

This is what we’ve been waiting for. If you’re the sort of person that was ever concerned.

Beyond that, there’s new things like Skater-cross and Powerblading bridging the gap between the incredibly small community of street skaters and the much larger and multi-million dollar industries of recreational and fitness skating. That’s not bad! That’s good! And if you can’t see that then I’m sorry for you and your worldview. Whatever chip you’ve got on the shoulder, just let. it. go.

And Crashed Ice — specifically the Dallago brothers showing what amazing training can be accomplished on blade skates — can help bring more athletes from hockey and downhill skiing into blading. Do I think they will be buying blader-brand clothes and anti-rocker wheels? No, I do not. But I think they may buy some Carbons or some CJ Sebas and some Level III frames and shit like that… which means that they’ll still be impacting our core community with more dollars.

Which is what needs to happen. It’s what’s supposed to happen. And it’s what is probably going to happen as long as we keep the knee-jerk alarmist, pure-bred, blue blood animosity to a minimum and take on a mentorship role with these new and future bladers.

In closing, I know that many of you will dismiss this as another optimistic take on the future or just more of me grandstanding to hear myself type — but I really don’t feel that’s the case. Numbers don’t lie. In this case, I’m pretty sure the Likes don’t lie.

There’s more people paying attention to blading, but they’re not necessarily like you or me. What I’m really saying is… that’s probably for the best.