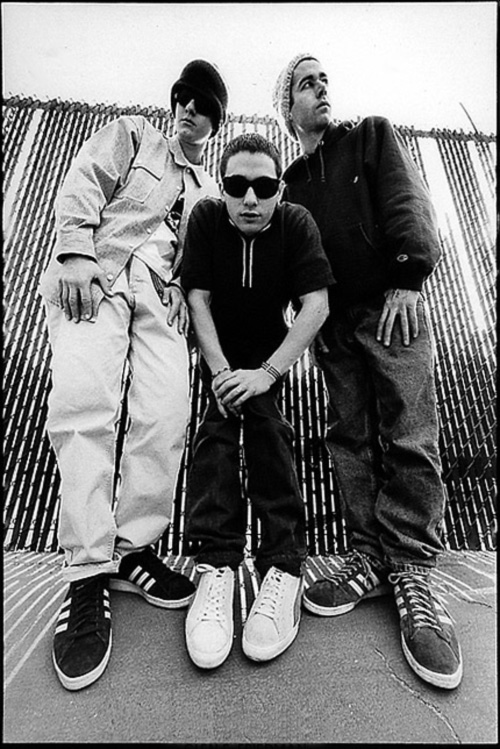 A Legacy of Style

By now pretty much everyone has heard the news that last Friday Adam Yauch, aka MCA of the Beastie Boys, passed away. He was 47 and had been fighting cancer for a long time. As Twitter or FB or just about any public news outlet can attest, people at large were bummed out.

When I heard the news, I thought of this image. Pretty sure it’s an image caught by Glen E. Friedman during the same shoot that produced the image which became the “Check Your Head” album cover. Some of you may recognize it as an omnipresent poster from the ’90s. How many dudes bought Adidas and Pumas after seeing this?

Not to wax too poetic about the loss of another person we didn’t really know, but in like ’96 we met Adam Yauch for a few brief moments at a house party at Oberlin in Ohio. He was doing a spoken word poetry thing on campus then must have meandered around until finding this party (It’s a really small town). I caught him hanging back in a corner, kind of taking the scene in. Looking back, the scene had to be comical to a guy like him. Bunch of college kids doing what college kids do, and thinking any of it mattered. But being the loudmouth I am I approached. We chatted for a bit. Mostly about snowboarding and mountains and stuff. He’d just gotten back from a trip. Whenever we parted ways I remember thinking that he had a lot more going on than just rapping. Guess that kind of made an impact on me.

Now it’s years later and it’s all too true that he had a lot going on. The Milarepa Fund. Oscilloscope Laboratories (You realized he distributed “Exit Through The Gift Shop,” right?). His tireless work on behalf of Tibet. And of course, performing with one of the most influential American musical acts of all time.

If you’re like us, and the Beastie Boys were a part of your audio repetroire as you progressed through your formative years, the loss of someone like MCA is especially nuts. He was a talent you could overlook — not to knock the guy — but when you share the stage with Mike Diamond and Ad Rock, you know, there’s some competition. What we mean to say is that being the third scoop of the B-Boy bouliabase makes it all the harder to imagine that this person — this talent, who you’ve long appreciated and maybe never properly thanked for their entertainment, inspiration or efforts — is gone. Mortality is real. If it can take MCA, none of us is safe.

“I’m flowing prose to cons and cons to pros / I’m scheming rhyme against reason like it was flow against know.” — MCA, Flowin’ Prose (Hello Nasty 1998)