An Itch That Needed Scratching

I’ve been around cameras for the past couple of years, picking one up here and there, mostly to help out with random company projects. A “film this, shoot that” kinda deal without any direction or training. I was having fun with it; a chance to take some time off of work and skate random spots throughout the day. It added a new creative element to skating, allowing me to take part in the session and work with a friend to achieve a goal, whether it was a clip for a video or just a quick snap for a blog. I love filming, but something about taking photos seemed way more interesting, using that single frame to describe an event. Finding the right angle, perfecting the lighting, capturing the environment, and making the skater and the trick look its absolute best. Knowing the photograph will demand as much attention as would 10+ clips or more. I felt that there was just so much more to it. Being given this opportunity to borrow good equipment and snap a few pics gave me the itch that would eventually need more than just a light scratch every so often. I had to buy my own camera. No more waiting for this lens or worrying about who has the flashes I used last week. I had to have a rig all to myself.

So here I am, about two weeks into my first camera. I purchased a Canon T2i, and I’m going out every day looking for that next spot or shooting with one of the homies. After a few weeks of pestering, a friend allowed me the use of his flashes over the next several months while he is away. My skates will no longer be riding solo in the trunk. 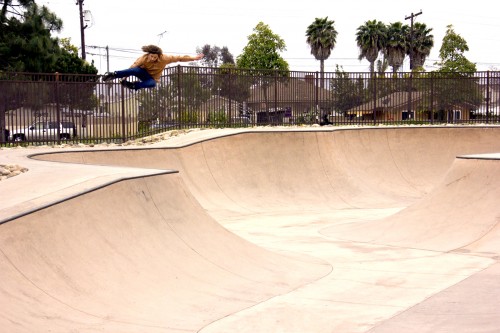 The first was a day out with Hayden Ball that included a random run-in with Andrew DiPaolo. We had planned to hit up some street when I got back in the ‘hood from work, meeting up at 30th park and heading out from there. The weather wasn’t looking all that great, but the bowls were empty and the breeze felt nice, so we stuck around to jam. Ball and Drew were cruising all over the place, so I set up my camera (to the best of my amateur ability) to take its first skating pics. After grabbing a few of Drew’s fence stalls, Ball started pulling some pretty sweet stale grabs over this hip. He did a few others that were a tad higher, but this one was framed just right, though it obviously needed a bit more light… next time. 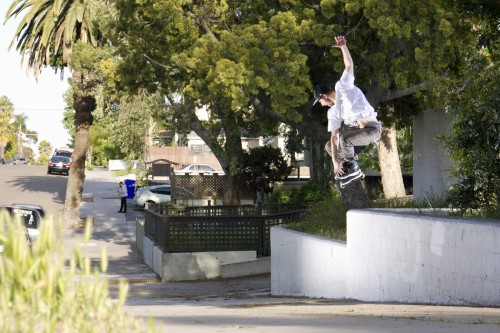 This next lil’ ditty is my first day out with my new flashes (well, first day out with the flashes functioning). After a busy day at the office I cut out around 4 to try and hit OB for an afternoon cruise before heading home. Somewhere on the I-5 I send a text out to my boy — and SD’s premiere real estate agent — Rob Cunningham to find out if he wanted to blade. ‘So nuff’ he’s down, but he’s more interested in some neighborhood spots. So we hooked up a bit later at this ledge that happens to be the midway point between both of our houses, less than a mile away and right near a few of our favorite hangouts. People have bladed it before, but I wasn’t sure if anyone had shot it, so i took the opportunity to get all camera geeky. Rob was messing around with some farvs and royales, dropping down to the next ledge. After walking around a bit I found what I thought was the best place to shoot, set up my flashes and boom… my first decently lit deal. Pretty happy with the result, although I think Rob may be a bit self-conscious of his exposed grandpa gut.

Side note: I have a slightly blurry version of this pic with Rob doing mute 180 off the higher ledge with two high school girls dressed up, one as and indian and the other as a cat. Unfortunately it didn’t turn out as crispy as this one… there’s so much to learn.