Rollerblading already had a Happy Black Jesus, that was Arlo Eisenberg. (By his own reckoning.)

But by our count, rollerblading has never once had a single, solitary person that the entirety of the world’s blade population could relate to… until now.

And that person is a 69-year-old retired doctor that goes by the name of Slomo. 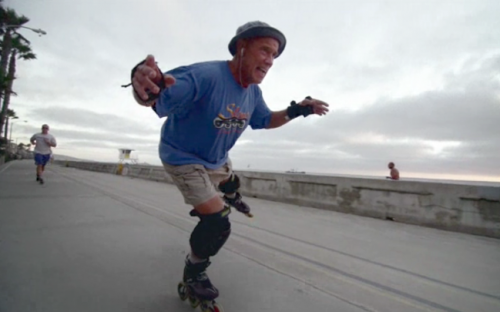 I found out all I wanted to do was the basic things… and to skate.”

If you’re like us, and there’s days you’ve taken your big wheel blades to the Pacific Beach and Mission Beach bayside trails and cruised, then you’ve probably seen him in action. I know I have. Long before he became an internet sensation, Slomo has been practicing his special breed of blading along San Diego’s most well-traveled and highly-visible beach-side boardwalks.

And face it, he sticks out like a sore thumb.

I like the added effect of people looking at me,” Kitchin says. “It’s enriching. It becomes half physical and a psychological thing. This is the best place to be an anthropologist to study your fellow man.”

There is nothing particularly subtle about Slomo, not from the outside at least. 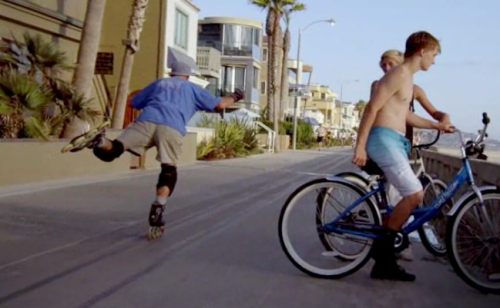 Huge pads, tall skates — Slomo challenges all conventions of what is “cool” every time he rolls the beach. Which is awesome in itself. But once we heard the backstory we — and much of the internet/blading public — were blown away.

There’s really no need for us to rehash all the details of John Kitchin’s former life as a successful doctor. He lived in a mansion, drove a 12-cylinder BMW, lived a life of leisure. But he was miserable, so he decided to do what he wanted to do.

And what Dr. John Kitchin wanted to do was skate. 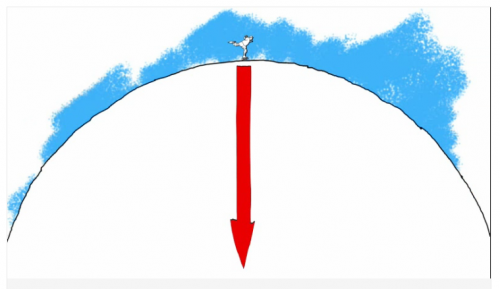 Listening to his theories and research on why he loves to roll is a truly inspirational and moving experience. But all the science and medicine in the world only serves as extra umph to the message — tune out. Do what you want. Don’t live someone else’s life.

What rollerblader doesn’t exude that ethos? To me, that’s a fundamental aspect of rollerblading — choosing to be an outsider. For whatever reasons, we move away from norms and instead find interest in the unusual. To many, blading itself is unusual, and yet to all of us it is a core of our beings.

But going back to our Happy Black Jesus and probably beyond, blading’s attempt to challenge societal norms has come with devil horns, middle fingers and a smarmy/sarcastic/condescending attitude. That may confront norms and challenge society, or something, but it also alienates people and puts everyone in a certain mindset. Us against the world. Me against you. Fight fight fight.

I want to think about eternal questions in the state of mind I call the Zone,” Kitchin says. “Slomo is an entity, a person, who lives in the Zone, purely subjective in nature.”

Slomo ain’t like that. He’s a guy on blades on the boardwalk searching for the eternal euphoria of constant movement.

And if you watch this documentary I think you’ll agree it sounds like he’s got it all figured out.

So we’re gonna make it a mission to go blade with Slomo. Try to get on his level. Feel the flow and be in The Zone. I mean, it’s a sensation we feel each and every time we strap up our blades, but often times it’s the background sensation to a day of trying tricks. Rarely is the pure fun sensation of “flying” (as Slomo called it) enjoyed simply for what it is — freedom.

Blading needs more Slomo. We all need more Slomo. For starters, take that first step and do what you want. That’s a message that bears repeating over and over and over again. And thanks to our new “messiah,” varied audiences all over the world are hearing that message via the New York Times.