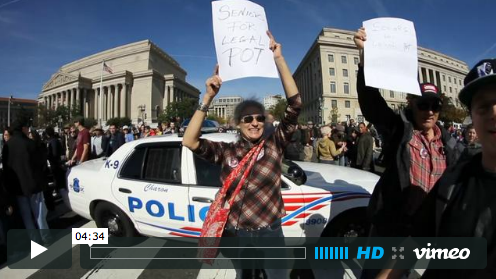 Blading at the Rally to Restore Sanity

People from the D.C. area are jaded. For the most part, we never attend rallies, protests, or marches. We have grown accustomed to our metros being flooded every weekend with people from out of town who don’t know how to work the fare card machine, carrying signs clogging up the left side of escalators, holding up our commute. We are jaded because nothing ever changes. Every weekend there is a new protest somewhere on the mall with more people shouting into megaphones, waving signs with ridiculous demands, and people across the street yelling at them for their beliefs. The futility of it all is not lost on the 600,000 residents of the District who still have no vote in Congress. To them, it couldn’t be more obvious that the people inside the Capitol don’t give a fuck about them. This rally was different. I, along with thousands of other people who call the D.M.V. home, packed onto the metro to head down to the National Mall.

Reporter and cinematographer Chuck Taylor and I arrived downtown around 12:15 and tried to blade through the sea of people to get a view of the stage. As we got closer the crowd got more and more dense, with people bumping into each other, trying to walk in all different directions. Some people seemed completely lost, standing still trying to figure out what direction to turn. Everyone was happy to be there and trying to get along even as the crowd got more packed in, frustrating, and confusing. I think America is like this. People want to get along, they want to love their neighbors, but everyone has a place they want to be, goals they want to reach. Along the way people start to bump into each other.

Behind all of the over the top signs and costumes I saw a lot of of sane people. It was a good reminder that there are plenty of intelligent Americans that don’t always agree with the policies of our government or with the people shouting nonsense on TV or AM radio. There’s still a lot of us that take the time to learn the facts, question what we are told, and love our fellow man.

The rally was definitely the most peaceful event I have ever seen on the National Mall and the largest crowd I have seen since Obama’s Inauguration. I can’t speak on anything that happened on stage at the rally; I couldn’t see any of it and and Comedy Central has decided to show “Scary Movie 3” and re-runs of “Drawn Together” instead of rally coverage. Nevertheless, the edit is a good collection of some signs and people we saw as we bladed through the experience.