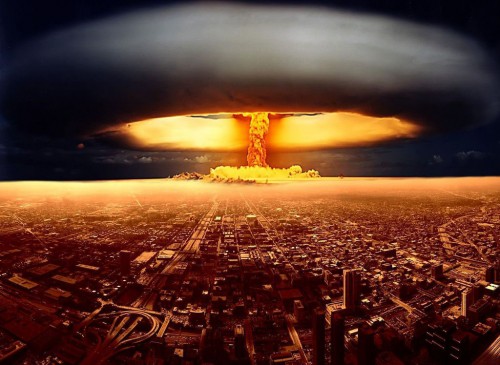 Okay, so that’s a mushroom cloud explosion, but you get the point.

If you were paying attention on FB or happen to be on the short email list from Fade Hurricane, you may have noticed a common theme running through that other sport that everyone loves to look up to so much. Let me sum up that theme: SHIT IS FUCKED AND WE ARE GOING DOWN. (ex. 1, ex. 2)

Now, let’s be clear — not everyone is fucked. Far from it. There’s the Ryan Sheckler, Rob Dyrdek millionaire asshats, and the top level pro dudes pulling in 40k a month ($480,000 annually) thanks to sponsors that are, well, major corporations. And while we all see the TV shows that have taught us to want large warehouses full of ramps and free stuff to fuck up and fast cars and big-ass contest pay out checks, the people who help make skateboarding happen at the indie level (what would still be huge by blading standards) have seen the big time $$$ writing on the wall. Because there’s other pros who pull home a whopping $2,000 a month. And a longstanding, diverse marketplace is feeling tremendous pressure that is funneling skater’s money into the already-lined pockets of Nike and Adidas and whoever. But as brands close down there’s more lost than just another choice in shoes or decks or whatever, there’s loss of the identity that made the community what it was.

Added to that, as the inside skateboarder types are talking about, real coporate money is changing skateboarding through the influx of that money, and the focus on metricized contest rankings that make commodities of the athlete/artist skaters themselves. Which, besides pushing skateboarding ever closer to figure skating (compulsory moves), lays the numbers-based foundation for stripping the vibrance and unpredictability out of street skateboarding. That sounds sad. Even to me, who doesn’t really care about what skateboarding cares about (despite the presence of this blog!). Just think about a skateboard company having corporate shareholders that demand results! It kinda boggles my mind. In a Hudsucker Proxy kinda way.

But I’m totally rambling, so here’s the point — reading this stuff made me think about a couple things:

1) The Skateboard Mag knew this shift (and that bad things happen when big companies take over your community) was coming and attempted to step away a long time ago. Last time I flipped through a copy I didn’t pay attention to who had ads, so don’t know if this is still true. But it was commendable.

2) Even though these guys smell trouble it’s likely a long way off, and probably a false alarm anyway that just trolls debate.

3) What they are experiencing now is essentially the same structure as the environment surrounding all burgeoning action sports during the ’90s, with ROLLERBLADING being no exception.

There was a lot of money at stake. The power of rollerblading pulled giants, like Fila and Nike, out of their comfort zones and onto wheels. They both failed, but that’s their fault. They didn’t know what they were doing. They were part of the problem that skateboarding is describing, but they contributed to and helped shape our landscape. Hell, B Luv was getting paid, son! Traveling the world! Backsliding up the Eiffel Tower (in an ad treatment)! And Mike Opalek was being filmed and photographed in Japan or some shit for Nike. And there was the Gap. And L2. Don’t forget all the TV time, and Marco Hintze backsliding on the fucking Naya water botle (Ha ha, Naya)! And that’s not even the tip of the iceberg. The point is, there was a time when blading was in deep with the corporations, but it wasn’t all sunshine and lollipops.

In fact, our sacred history as rollerbladers is filled with revolting against this very machine. Box. Video Groove. Daily Bread. Senate. Fucking Rollerblade with Chris Edwards pioneering the whole damn thing. But Rollerblade was a company, and companies (the “bad” ones) were BAD but skaters were good and things skaters liked were good and your friend making money from a company was GOOD but companies were BAD. And ungh did you know that a company paid for this thing but companies are BAD and are you confused yet?

That’s right. We are where we are in large part to our own actions — actions designed to liberate us from the problems of corporate control. They just never thought the money would stop.

But I have good news! We’re a lean, mean machine that is toughened up from years of the opposite cycle. You know the one. And who cares. Let’s continue to celebrate it. Let’s keep blading. Let’s try our best to learn from our mistakes and the mistakes of others. Because whether we realize it or not, we’re in a prime spot.

The global marketplace has changed. You realize it — you’re probably reading this on a device that didn’t exist when we started ONE. Though mainstream attention is still hard to come by — the result of serious PR dollars or absolute luck — it’s easier than ever before to participate in and engage niche communities. Think about how Facebook and Twitter have changed your life (we can debate whether for good or bad later on). Do you go to message boards anymore? Visit websites without a Tweet or Status update? Ha ha, didn’t think so. Who does? That’s the point. Look at Etsy. Think about the craft-made phenomenon. Picture the boutiques in your town and the fancy shit you find on the internet. Well, that’s where we cut out the middleman and take a nice shortcut. And people are already doing it.

Them Goods and Southern Scum come to mind. Erik Bill and Snake River Special. Shred Till You’re Dead II. These are custom products made especially for a very specific person — in incredibly small batches. For all intents and purposes, they are priceless and irreplaceable. It’s really fucking cool. And unlike the elusive dragon of public exposure and mainstream respect we’ve sought for years, this beast can be tamed. And the people who benefit are the same people in the transaction and they are the people who care about rollerblading.

Anyway — back to the point. Don’t look now, the sky is falling. But we’ll survive. We always do. And it pisses them off to no end.

Which is yet another reason the Blading Cup airing on Fox Sports West was so damn boss.