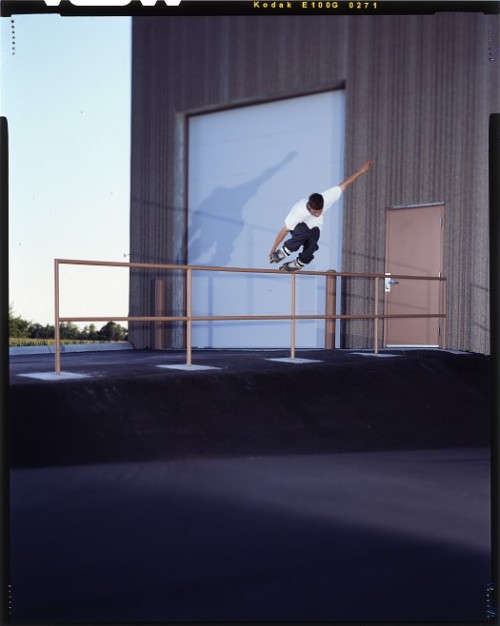 So here is my second Flashback photo blog with images once again provided by John Haynes! This blog is from one amazing session in particular. About six years ago, before everyone lived in the Twin Cities of Minnesota, St. Paul and Minneapolis, the bladers in our crew were spread out in various suburbs around those two main cities. So far apart in fact, that it was often joked that in a session of eight bladers, there would be no less than nine cars at the spot.

This amazing bank to rail was found by Jeph and Joe Howard, as well as Aaron Peterson. Joe and Aaron had both worked at a telemarketing firm inside the business park where this spot was located, so when the the area was repaved with a brand new rail and incredibly smooth bank, they were quick to tell John and me about it, and we all found ourselves at this spot during one amazing Saturday session. A spot like this is the perfect example of Jeph’s influence on the whole Minnesota skate scene (as well as all skaters who get the chance to session with him).

When we got to this spot, I heard a few talk about how high the rail was and say that it was a little less than ideal. Now this statement had its merits, as the rail was in fact above waist height, but Jeph, forever the optimisit, took a slightly different view point. He pointed out that with a bank that was so perfectly made, it would easily launch you to the rail. And perhaps the height of the obstacle may even be a good thing with such a well designed set up. I decided to take him up on his words of advice and be the first to take a crack at locking on. My first half-hearted attempt to jump to grind launched me so well that I went clean over the rail, landing perhaps the world’s most ridiculous looking accidental 360 in the history of blading. I had the biggest smile on my face because I knew right then that this was going to be an incredibly fun spot to session. That initial vibe is something that does not happen every session. It tends to be the type of thing that jump starts all the skaters into an immediate commitment, that vibe leads bladers to have truly amazing sessions

So with that first jump out of the way, everyone put their blades on and tried their luck with this perfect bank to rail. The immediate juice brought out tricks from everyone who skated it. It has been a long time since this session but I remember several memorable moments including Joe coming through with a perfect 270 back royale after saying he did not want to skate the spot at all. Aaron Peterson doing a truly amazing backslide 270 out and flawless backside backslide to fakie. Jeph got two amazing photos of two ridiculous tricks, a picture perfect ao top soyale, and a true top porn that to this day makes pretty much no sense at all to me… unbelievable. 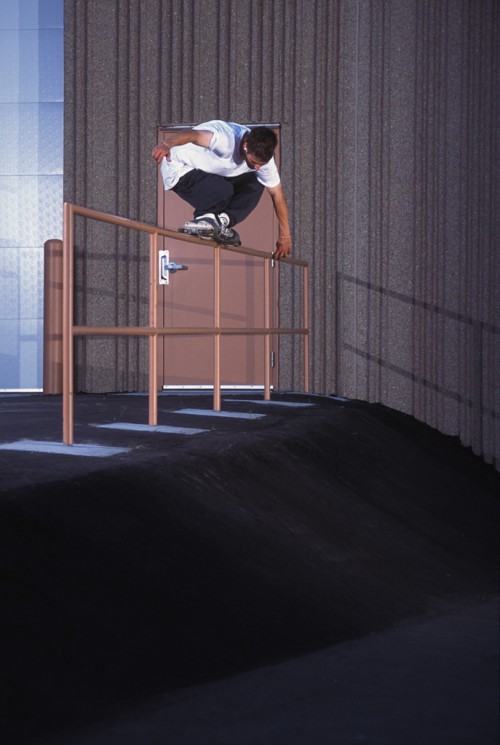 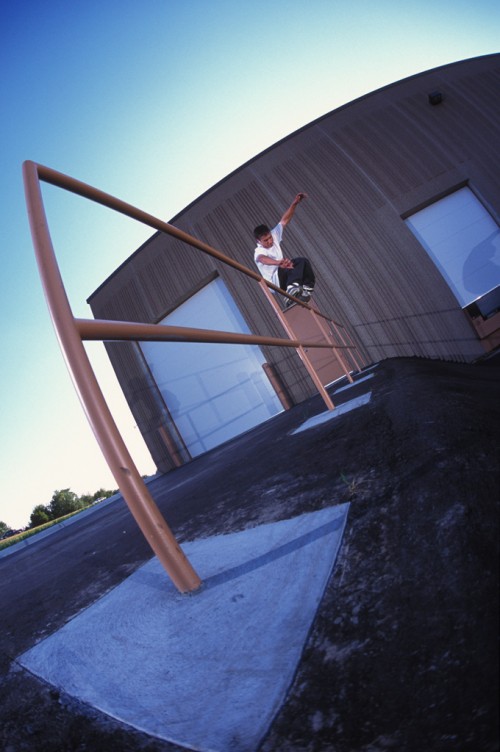 On the photography front, John and I also combined forces to get photos of four or five separate tricks with multiple angles of almost every single one! In addition to shooting the photos on the standard digital format, John was in the process of shooting a Be-mag article of photos from on his 4×5 camera. The photo John shot of me that I have included in this article is an Alley-oop Fishbrain. This photo will always be one of my two favorite photos that I have ever managed to land in my nearly 14 years of blading. This was one of those tricks that you somehow know is going to turn out awesome the moment you feel those skates leave the concrete. The moment I locked on the rail I knew it was game over as far as what I was required to do, the height and angle of my launch off of the bank was exactly where it needed to be, and I was on top of the rail in just the way that I like to be when doing this trick. Perfect feeling at the time of the skate locking on, and hey… Screw just grabbing the soul frame, I say grab the actual frame too!

Confident as ever when I landed, and fairly proud of my personal blading accomplishment, I could hear John actually laughing because he knew that he had managed to do his job even better than I had done mine. So I rolled away to the other bank to finish the trick for the video shoot, rolled down the bank on the other side and it was nothing but smiles for the skater and photographer because those moments when everything turns out perfect are nothing short of Hailey’s Comet.

When you go out to skate for the camera, everyone gets the job done in the end because it has to get done. However, not everyday does it all come together so seamlessly. I would say you could even go as far as describing this whole session with just the actions of this photo getting taken. Somehow you end up in a random location with the most incredible friends and when you least expect things to happen, that is when everything goes according to plan. Those are the moments we live for as rollerbladers, and they are the memories that remain the most vivid long after the session is over.

Haynes is the man, so sick that he shot that on large format camera. Curious to know how the other ones came out.