Who created god? Why does anything even exist in the first place? These are the questions that don’t keep me up at night, because I’m too busy arguing with strangers on the internet about rollerblading terminology.

Just a quick disclaimer, this is by no means an attempt to solve all of our problems or tell anybody they’re right or wrong. This is just an attempt to look back over the years that brought us to this point and respectfully list the existing arguments and why some people believe them and some people don’t.

The origin of the term “alley-oop” was slightly before my time (I was just beginning to learn how to jump off curbs). But from what I understand it originated from vert skating, to describe a way of airing from one end of the ramp to the other, as opposed to airing straight up and down the ramp. When people started doing reverse/backwards soul grinds, it had a similar appearance, so the term began being used for the reverse variation of all grinds.

So we were off to a decent start, until somewhere around 1997, when people started turning/spinning the opposite direction to these reverse grinds, and the paradox of “truespin alley-oop” was born. This seemed perfectly logical to thousands of little dudes like me because we had only ever known “alley-oop” to mean reverse. But since it actually referred to the direction you were spinning, and truespin referred to spinning the opposite direction, this was obviously a problem, as DB pointed out about twenty years ago.

To this day we still have no specific term for a reverse variation, and some of us still say “truespin alley-oop.” We conducted a super scientific emoji poll on this last summer and over 50% of the 264 people who responded said they still say it. 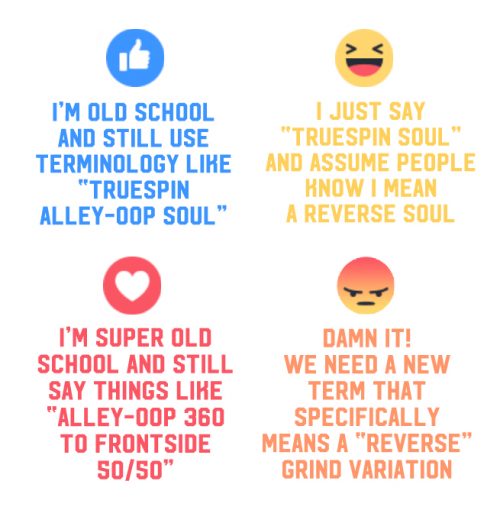 Just for a second I’m going to jump ahead about a decade. Somewhere in the mid to late 2000’s an argument began to appear, that the terms alley-oop and truespin should not be applied to frame/groove tricks.

Oh yeah, and then there was this cool sounding word “savannah” just to make things even more confusing. I attempted to track down the creator of the term. Justin Eisinger thought it was Nick Riggle. Nick said he thought it was Jon Julio. Jon is a businessman and knows how emotionally unstable rollerbladers are, so he pled the fifth. Azikiwee Anderson said he thought it was Julio also, so that didn’t help. Ultimately none of it really matters anyways, because the problem is right from the start, some people used it to refer to alley-oop unities, and some used it to refer to alley-oop backside unities, and both sides will stab you in the face if you say otherwise.

So do we want the term “savannah” applied to alley-oop unitiy? Or specifically to alley-oop backside unity? And do we specifically want it applied only when done alley-oop? But not truespin? Is the term so redundant we should just drop it all together? And how would we refer to these other variations if we decide against using alley-oop/truespin for frame grinds?

We also conducted an emoji poll on this conflict and over 70% of the 285 people who responded said a savannah doesn’t have to be backside, it could just be an alley-oop unity. 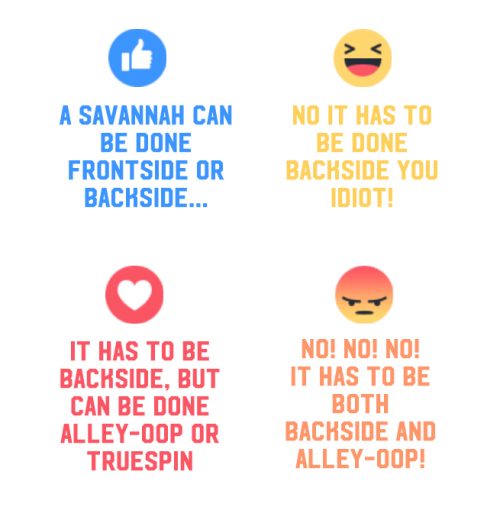 I can’t not mention the inspin/outspin conflict. But there is so little consistency, it’s hard to even summarize. If a rail is on your right and you 360 left to a top soul, some people would call that outspin. But if you 360 left to a soul, some people would call that inspin. Sometimes it is even the same person saying it would have been outspin for top soul but inspin for soul. Sometimes a person will consistently say both were outspin, but if you had rolled up fakie, they would say it was inspin. Some people even try to some how factor in the skater’s switch and natural. Then there is the lesser used term “hurricane,” arguably created first to refer to the spinning cess slides made famous by Robert Lievanos. Then the even lesser used “inside/outside,” and even lesserer used “hardspin/easyspin.” And don’t forget the overlapping terminology of alley-oop and truespin.

So that’s a whole bunch of options and very little sense. For the sake of minimalism it has always been my opinion to just drop all spin references except for alley-oop and true spin, since they are the most common, and then finally create a term specific to reverse variations of grinds. It might sound crazy, but maybe we could just say “reverse.” But it’s obviously not my place or any one individual’s place to say.

There are other smaller squabbles, but these were the big ones. Again, I’m not trying to tell anybody they are right or wrong. I just wanted to provide a respectful overview of all the major conflicts and arguments. We tend to get locked into our own understanding as if there is some objective science to it all. There’s not. It’s all made up. For everyone who has made it this far without becoming too emotional, thank you. I hope I was able to provide some insight into opposing arguments and you understand a bit more why the other side argues what they do and they now understand a bit more why you argue what you do. If we can gradually begun discussing these conflicts in a more reasonable manner, one day we might actually be able to create a logical system everyone can agree on.