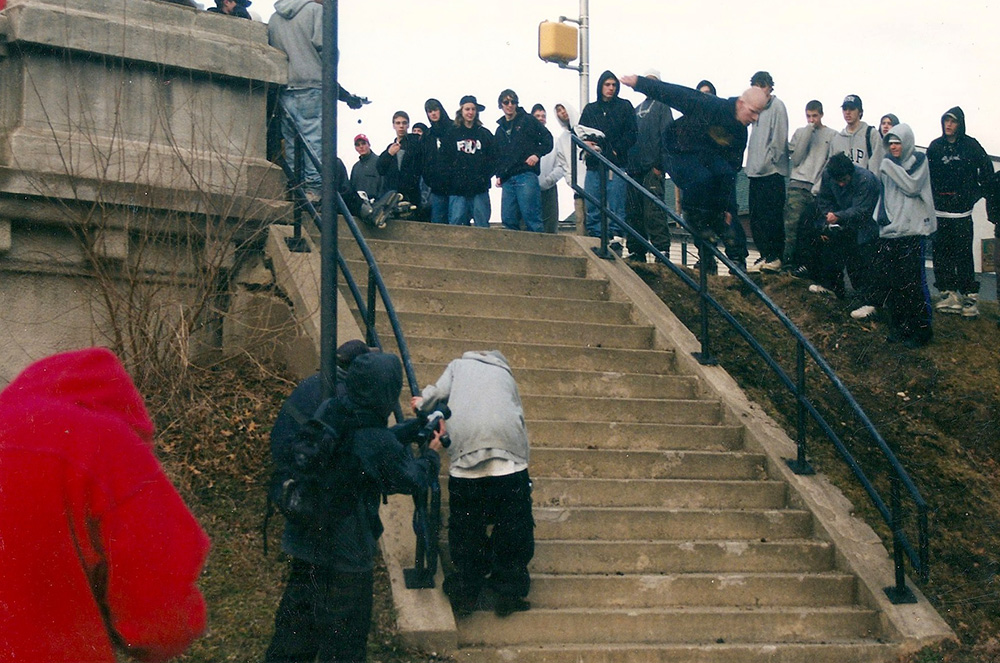 Out Of The Cold 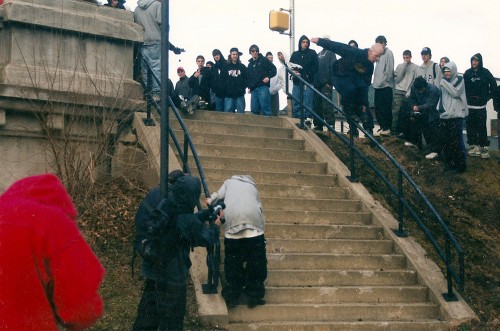 The opening paragraph of my first ONE Blade Blog ended:

After our first year attending in Elkhart (2002), Eddie Dombrowski and I pulled into our hometown on Sunday night and spent an hour skating a local spot just to hold on to the experience a little bit longer before we had to return to home and school. It would be dishonest if I didn’t acknowledge that the sense of community that Kaz and I were trying to communicate to the outside world in ‘Jack Be Nimble’ [which premiered at BCSD 2009] was a feeling we had first come to understand watching dozens of rollerbladers turn a small-town Red Roof Inn into the Riot House.”

I recognize that this might have seemed more significant had this blog project ever really got off it’s feet. I started this last year in the hopes of riding the residual high of The Bitter Cold Showdown through a more productive 2012.  Part of that was a hope that I could create something new. Part of it was an attempt to reclaim something I’d lost. Of course nothing lasts forever and by May of last year I had reintegrated into the routine of modern adult living. Perhaps this failed attempt to hold onto my past is part of the reason why those co-opted words from Frost stung so bad as I read them at my office Monday morning: “Nothing Cold Can Stay.”

I missed the first Bitter Cold Showdown. I’ve been to all 12 since. That means I’ve lived in that world for 36 days of my life. I never attended an X-Games and I assume most of you reading this probably didn’t either. Yet we’ve spent the better part of a decade bitching about our banishment from that event. Doesn’t that feel wrong now? Had any of us really taken the time to consider what we had? What Daniel Kinney built and shared with us?

What started as a small Midwest contest, in northern Indiana of all places, became the best event and tradeshow in the world because a kid from flyover country cared about blading and decided to create a way for it to be showcased properly. Think of how many contests have come and gone in the last 13 years to get a full picture of how unlikely this was to be successful. Now think about NISS, ASA, IMYTA and The X-Games and consider that BCSD ran longer than all of them.

Then consider the names Ben Weis, Rory Melehan, Jeff Stockwell, Billy O’Neill, Sean Kelso, Erik Bailey, Brian Aragon, Alex Broskow, Montre Livingston, Chris Haffey, and most recently CJ Wellsmore. This isn’t a random collection. These are the guys who redefined our sport over the last 13 years. It’s a generation of bladers that hit its peak after the so-called “fall of blading.” It’s fitting to have seen the event grow with them; starting as an amateur street and park contest and slowly becoming something more; Growing into a larger venue, eventually having to separate the pros from the rest, adding stands for an audience and limiting course access to media staff and competitors. It matured with all of us.

And then there was the immaturity: the hotel scene, Bar Bar, the parking lot, the flasks in the park. All of it just as important to the controlled chaos of the weekend as the skating was. At other contests you watched the pros. At Bitter Cold you shared drinks and had late night conversations with them. Chris Edwards was likely to walk into your hotel room at 2:00 in the morning and simply want to hang out. At Bitter Cold you found yourself at a drunken 4:00am breakfast surrounded by people you only knew from magazine covers. You didn’t just get raided by the cops in the KFC crew’s hotel room, you then walked to the Elkhart Steak N’ Shake to try and stave off the impending hangover only to find yourself looking in wonder as the very cop who just ordered you back to your room waltzed in to meet his underage girlfriend. You never really knew what would happen, but guaranteed you would be talking about it for the rest of your life.

It shaped the scene. You got past the shock of being surrounded by your heroes and began to see people. Running into the pros was great, but getting a high five from Doug Williams is what you looked forward to year after year after year. Kentucky, Ohio, Pennsylvania, Minnesota, Wisconsin, Indiana and always the loud “Chi-ca-go, Chi-ca-go, Chi-ca-go” were tied into the fabric of the event. It felt like home. Walking out of the park and into the cold air, filled with smoke and sweat and whiskey, stirred up memories of years gone by. The Ghosts of Sean Callahan and James Short could still be found floating through the crowd even after they were memorialized over the loud speaker.

I can’t imagine what will rise up in its place but it’s so plainly obvious to me that something will. BCSD was a checkpoint from one year to the next. It bridged the gap from ASA to The Blading Cup. It was ours whether anyone else was watching or not. It grew out of the entrepreneurial spirit of the skater owned movement of the early 2000s. It was funded by bladers supporting other bladers. Small and large companies were able to showcase what they had to offer. Locals could work their way up and find they were competing against the best in the world.

This community is stronger than it was 13 years ago, in large part because The Bitter Cold Showdown existed. It is a testament to the fact that someone out there will pick up the torch. It’s a warning that it will take hard work and inspiration. It’s also proof that you don’t need to wait for someone “in the industry” to do it for you.

Daniel you walked away as classy as possible, on your terms and with the event at its peak of popularity. The social media response over the last couple days should be enough for you to realize how much your contribution meant to everyone who got a chance to be a part of it as a skater, a company owner, a shopper, videographer, photographer, Bar Bar patron, judge, hater, writer, or spectator. You probably heard it every year but I know we never said it enough: thank you.

Thanks for remembering James Short. BCSD was always near and dear to his heart. He was there from the very beginning.

James and I only knew each other from the contest. But we both loved toe rolls and he gave me a room to sleep in the last year it was at Vertigo. Truly missed running into him every year.

John, you should come to the James Short Memorial Session Saturday August 24th! We’d love to have you here!

I saw the edit from last year. Looked like a great time. Would love to make it out.

I grew up skating with Daniel, from a very young age we probably met when I was 12 or 13. Daniel and I have seen people and events come and go in our sport. I was greatly honored to be in many videos and edits Dan has made, Quo, Universial Appeal etc…. We have traveled together, filmed together, drank together, and again I was honored to be in his wedding with another long time friend and bladder Christian Macon. Dan and I lived just miles apart and it has been a pleasure to ride on just a dust of what he has done for rollerblading. Thank you!

Since I moved back home from Arizona and Detroit 5 years ago, Bittercold weekend has been the highlight of my year. I’ve been so fortunate to meet so many incredible people and maintain friendships that otherwise would have been lost.

Daniel, I can’t thank you enough for the gift you have given me and the blading world as a whole.

John, this is spot on. Thanks for your eloquence.

Very enjoyable read. It is a sad time, but I am confident good things will grow because of the new founded support and passion shown from this event coming to a close. All good things must come to an end, doesn’t mean we can’t make more..

“A beautiful touch of history.”

I salute you DK. Thank you.

Bittercold was always the event I looked forward to. Although I haven’t skated in over five years now, every year I made sure to watch the edits made of the contest. I missed the first contest but made everyone after that for six years. It was always the best time and would look forward to going all year making the trip all the way from cincinnati. Seriously some of my best memories of rollerblading have been from bittercold. Like everyone has been saying there is nothing better than walking out of your hotel room and walking into your heroes like Rachard or Frankie and get to actually have a 10 minute conversation with them. When I look back on rollerblading truly what I miss most is bittercold it is hands down the best event and only event of its kind and I hope more events come to be like it for the sake of all the new people to blading community. I mean it when I say thank you Daniel ill always cherish going from a spectator to a competitor and now back to a spectator. Oh and no matter what I’m always going to rep the 513 HOLLA BACK!!!