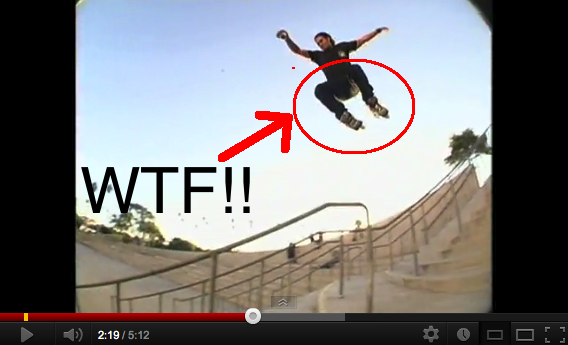 Ever wonder why “switch stance” sections in the VG videos were always titled Unnatural instead of something else like “opposite,” “switch,” or “switch stance”?

I’m happy to tell you because this is one of the rare moments in linguistics in which there’s something like a definitive answer available.

It was because Dave Paine (videographer and editor of the VG series) made a concerted effort to avoid using skateboarding language in rollerblading.

Recently Dave told me that he personally “pushed a lot” to never use “anything that had a skateboard name if at all possible.” Skateboarding was already using the term “switch stance” and so Dave spearheaded the effort to make “unnatural” the norm in rollerblading.

Other similar attempts have been made, including the proposed abandonment of “half-cab” (named for skateboarder Steve Caballero) in favor of “inspin/outspin.”

Neither “unnatural” nor “inspin/outspin” completely replaced their counterpart skateboarding terms, but both have developed side-by-side with those older terms and still enjoy a sufficiently enduring habitude today.

I applaud the efforts by Dave and others to create language that might help stem the trifling “little brother of skateboarding” stereotype that rollerbladers have lived with for over 20 years. I also salute Dave for possessing such a keen awareness of the power language has to define our identities.

Dave Paine, this Bud’s for you. 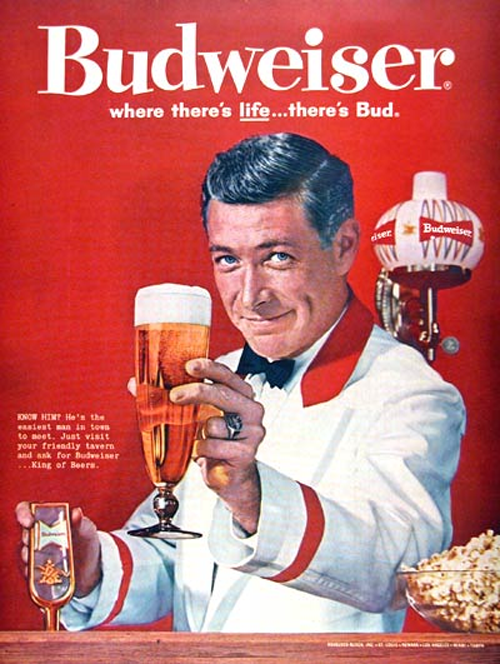 To whatever extent we’re collectively willing to own up to, rollerbladers have taken a large amount of conceptual knowledge and vocabulary from skateboarding, and in the absence of our own linguistic alternatives, we’re obliged to continue to locate some of our jargon in common heritage with counterparts in skateboarding.

It’s very important to note, however, that while our exaptation of skateboarding terms has limited us in certain ways, we have also adapted those same terms to mean (sometimes slightly and sometimes drastically) different things commiserate with our embodiment. For example, rollerblading exaptated the term “backside” from skateboarding, but invented “farside” and later, “topside” to account for the way our boots and frames can sit atop a rail or ledge.

Most of the time we come up with our own entirely new names and language, but some terms seem simply intractable.

One such term rollerblading can’t seem to replace is the ‘disaster.’

what about a little something on the fahrvergnuegen debate that took place on the pages of daily bread in 1998? in europe, it’s still a fahrvergnuegen, not a full torque.

Hey Josip, thanks for the comment man. I probably can’t do anything with any debate that occured in DB because (among other things) I don’t have those magazines. The nugen/full-torque stuff will probably make their way into an article I’m working on for a few weeks’ time. Maybe something about them might slip into the contradictions article for next week. For the record though, down here in Texas, most people still I’m in touch with use either “fahrv,” “fahrvergnugen” or just “nugen.” I definitely keep an eye out though, man. Thanks!

I’ve never heard anybody ever use the term “full torque” anywhere that I have been.

Alan: I know “full torque” is out there, but I, too, don’t recall anybody using the term with me in “real life.” I’ve definitely seen it in captions though.

Basza: Any idea where “Nifti” came from? Also, would it be obscenely rude of me to inquire whether the shift away from the German “fahrvegnugen” has socio-cultural (or even political) movitivations for the Poles and Polonia?

Hey Frank. On one hand I understand the desire to reject skateboard terms. But, I talk to a lot of skateboarders and bikers and it is useful to have shared terms. How do you think the rejection of skateboarding terms affected the relationship between our subcultures? I can picture skateboarders thinking, “why are they coming up with a new name for a trick we already invented?”

Bringing back the topside/farside discussion for a moment, I was riding with bikers last week and was thinking about how they use downside for what we would call topside.

Well I would start by saying that there is a lot of shared vocabulary across all of action sports—I mean, for a start, we share almost of all of our “environmental” terms (skateparks, ¼ pipes, rails, vert ramps, etc.). BMX is really the only one with unique terrain (consider snowboarders and skiers share the same mountain (and other terrain)) in the form of dirt jumps. Since those things are common across (basically) all of action sports, we essentially have no choice in the matter.

I would add that many of the “most basic” tricks that are particularly tied to what I’d call “universal embodiment” (we are, most of us, upright, bipedal, gravity bound humans) have transferable names, for instance, front flips, back flips, 180s, 360s, etc. But all the names fail to be universally transferable because our activities demand both imagined and real differences in our embodiment. For example, our term “topside” makes little sense when applied to snowboards or skis, but, as you point out, it would make some sense for a BMX bike fitted with grinding pegs that would serve in that case as a metaphorical extension of a rollerblader’s “soul” (sole) space.

“Farside” also comes to mind as a ready export suitable to BMX, who, as far as I know, weren’t yet doing “downsides” with the regularity that rollerbladers were doing “farside” or “topside” grinds. I don’t know why the term never found its way into BMX lingo, but I am virtually certain that it NEVER did. They, as you pointed out, use the term “downside”.

And that raises an interesting point about power. It’s clear to me that rollerblading has influenced the other activities, which is inevitable since we all share so many common spaces, but they haven’t adopted any of our conceptualizations, lingo, or language. That means that language-encoded influences are strictly unidirectional flowing into rollerblading. To use an economic metaphor, we (rollerbladers) simply have no exports. Maybe I should better say, “We have, comparatively, very few exports.”

My view is simply that action sports share nearly universal language when embodied differences play no role. However, once embodied differences enter the picture, you see very little in the way of equitable exchange between activities. And sometimes to the peril of the activity. Consider that in freestyle skiing, the people and culture involved adopted snowboarding’s term “switch” (for fakie) after skateboarders threw such a wall-eyed fit at snowboarders—who were originally using the term “fakie”. Sooner or later skiers will realize that they can’t ski “switch switch” (or what rollerbladers would think of as “switch” or “unnatural” fakie—meaning to proceed backwards while looking over one’s opposite shoulder. At that point, they’ll have to come to terms with the mistake and their language will then include a massive contradiction (almost exactly like the truespin/alleyoop problem we have in rollerblading).

As a final thought, I would suggest you take a look at something called “Basic English,” which was the brainchild of a rhetorician named I.A. Richards. His “Basic English” is a marvelous attempt at boiling down language to its barest bones—a mere 800 words—that he argued might stop a second World War (he wrote it after WWI—which was called “The Great War” or “the War to End All Wars” before a second global scale conflict necessitated the re-imagined term “World War ONE”). He reasoned that the nations of the world went to war with each other as a result of a failure to communicate and understand one another. It is a fascinating piece of work—grounded in the best linguistics of his day—but it nonetheless made no difference in preventing a second horrific war.

One of the reasons people can’t stand simplified versions of their languages—or even simplified readily translatable dialects, like Richards’) is because of the ways language reflects the values and worldview of their people. People like themselves, they like their worldviews and their cultures; that’s actually WHY we have different languages in the first place. Diversity isn’t an obstacle—it’s a virtue. Personally, I think that diversity is the loftiest goal, not the other way around.

Thanks so much for your thoughtful comment, Jesse. I hope you keep reading!

HOLY BEJESUS! As it turns out, Carlos Pianowski is a black guy from Las Vegas: http://www.dailymail.co.uk/news/article-2161294/Wesley-Warren-Jr-Man-100-pound-scrotum-REJECTS-free-1m-corrective-surgery.html?ICO=most_read_module