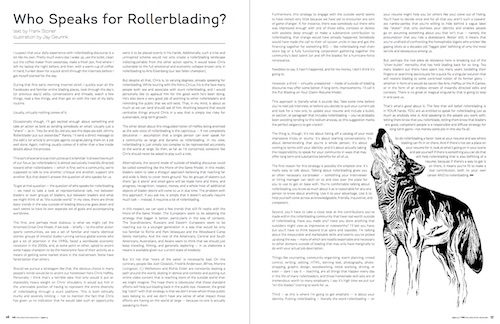 I suspect that your daily experience with rollerblading discourse is a lot like my own. Pretty much every day I wake up, use the toilet, clean out the coffee maker from yesterday, make a fresh pot, find where I left my laptop the night before, and then, with a warm cup of coffee in hand, hunker down for a quick stroll through the Internets before I get myself started for the day.

During that first early morning Internet stroll, I quickly scan all the Facebooks and familiar online blading places, look through the day’s (or previous day’s) edits, conversations and threads, watch a few things, read a few things, and then get on with the rest of my daily routine.

Usually, virtually nothing comes of it.

Occasionally though, I’ll get excited enough about something and take an action as bold as sending somebody an email. Usually just a “share” — as in, “Hey So-and-So, did you see this dope ass edit Johnny Rollerblader put out yesterday?” Rarely, I’ll send a direct message to the edit’s (or article’s) principle agents congratulating them on a job well done. Again, nothing usually comes of it other than a few inside details about the process.

This sort of scenario is as instructive as it is familiar: it shows how much of our focus (as rollerbladers) is almost exclusively inwardly directed toward other rollerbladers — which is fine; we’re a community, we’re supposed to talk to one another, critique one another, support one another. But that doesn’t answer the question of who speaks for us.

To get at that question — the question of who speaks for rollerblading — we need to take a look at representational talk, not between bladers or even groups of bladers, but between bladers and what we might think of as “the outside world.” In my view, there are three basic trends in the way outside-of-blading discourse goes down and each seems to have its own separate set of goals and accompanying worldview.

The first, and perhaps most dubious, is what we might call the Anointed Great One Model. If we look — briefly — to the other action sports communities, we see a set of familiar and nearly identical stories: groups of (mostly) dudes running various global scenes who got a lot of attention in the 1990s, faced a worldwide economic recession in the 2000s, and, at some point or other, opted to anoint some happy champion to be the metonymic face of their activity as a means of getting some market share in the mainstream. Some have fared better than others.

Should we pursue a stratagem like that, the obvious choice in many people’s minds would be to anoint our hometown hero Chris Haffey. Personally, I think that’s a terrible idea. Not only would it put an impossibly heavy weight on Chris’ shoulders, it would put him in the unenviable position of having to represent the entire diversity of rollerblading through a stunt platform. This is both ethically murky and severely limiting — not to mention the fact that Chris has given us no indication that he would take such an opportunity were it to be placed evenly in his hands. Additionally, such a trite and uninspired scheme would not only create a rollerblading landscape indistinguishable from the other action sports, it would leave Chris vulnerable to the full emotional and economic collapse known only in rollerblading to Arlo Eisenberg (our last fallen champion).

But despite all that, Chris is, to varying degrees, already speaking for rollerblading. While touring with the Nitro Circus, his is the face many people both see and associate with stunt rollerblading, and I would personally like to applaud him for the good work he’s been doing. He’s also done a very good job of pointing to other rollerbladers and reminding the public that we still exist. That, in my mind, is about as much as we can (and should) ask of him. Anything beyond that would centralize things around Chris in a way that is simply too risky for sustainable, long-term growth.

The other detail about this misguided notion of Haffey being anointed as the sole voice of rollerblading is the capricious — if not completely delusional — assumption that a single person can ever speak for a community as large and dynamic as rollerblading. In my view, rollerblading is just simply too complex to be represented accurately to the world at large. So then, as far as I’m concerned, someone like Chris should never be asked to play such a role.

Alternatively, the second mode of outside-of-blading discourse could be called something like the More-of-the-Same Model. In this model, bladers seem to take a shotgun approach believing that reaching far and wide is likely to cover more ground. You let groups of skaters out there “go it alone” and small gains will be made here and there, and progress, recognition, respect, money, and a whole host of additional objects of blader desire will come to us in due time. The problem with this approach, if you ask me, is simply that it doesn’t actually require much talk — instead, it requires a lot of rollerblading.

In this respect, we can spot a few trends that still fit neatly with the More-of-the-Same Model. The Europeans seem to be adopting the strategy that bigger is better, particularly in the way of contests. The Scandinavians, Russians and Eastern Europeans seem to be reaching out to a younger generation in a way that would be only too familiar to Richie and Pam Velasquez and the Woodward Camp family mentality. And the rest of the Americans, Central and South Americans, Australians, and Asians seem to think that we should just keep traveling, filming, and generally exploring — in as elaborate a means is available given our current state of modesty.

But it’s not that “more of the same” is necessarily bad. On the contrary, people like Josh Glowicki, Fredrik Andersson, BFree, Montre Livingston, CJ Wellsmore and Richie Eisler are constantly beating a path around the world, skating in demos and contests and putting out online video content that is reaching more of the outside world than we might imagine. The hope there is (obviously) that those standard efforts will help put blading back in the public eye. However, the great big “catch” with that strategy is that we don’t know whom those public eyes belong to, and we don’t have any sense of what impact those efforts are having on the world at large — because no one is actually speaking to them.

Furthermore, this strategy to engage with the outside world seems to have netted very little because we have yet to encounter any sort of game-changer. If, for instance, there was somebody out there who was impressed enough with one of those edits, contests or demos with pockets deep enough to make a substantive contribution to rollerblading, that change would have already happened. Somebody would have made the call to their oil tycoon uncle-in-law and got the financing together for something BIG — like rollerblading mall chain store big or a fully functioning corporation gathering together the community’s best talent (on and off the blades) for a hurricane-force renaissance.

Needless to say, it hasn’t happened, and for my money, I don’t think it’s going to. However, a third — virtually unexplored — mode of outside-of-blading discourse may offer some better, if long term, improvements. I’ll call it the Put-Blading-on-Your-Damn-Resume Model.

This approach is literally what it sounds like. Take some time before you’re next job interview, or before you decide to quit your current job and look for a new one, to update your resume and include a bullet, or section, or paragraph that includes rollerblading — you’ve probably been avoiding tending to this tedium anyway, so this suggestion marks the perfect exigency to get crackin’.

The thing is, though, it’s not about listing off a catalog of your most impressive tricks or stunts. It’s about starting conversations; it’s about demonstrating that you’re a whole person; it’s about coming to terms with your identity; and it’s about actually taking the responsibility to speak for your community in ways that may offer long term and substantive benefits for all of us.

The first reason for this strategy is possibly the simplest one: it’s really easy to talk about. Talking about rollerblading gives you an often necessary ice-breaker — something your interviewer or hiring manager can latch on to and toss over the plate for you to use to get on base with. You’re comfortable talking about rollerblading, you know as much about it as is reasonable for any one person to know about anything. Use it to your advantage. Use it to help yourself come across as knowledgeable, friendly, inquisitive, and competent.

Second, you’ll have to take a close look at the contributions you’ve made within the rollerblading community that have real worth outside of rollerblading. Have you made any? Have you done anything that outsiders might view as impressive or noteworthy? I’ll bet you have, but you’ll have to think beyond true spins and topsides. I’m talking about the measurable and marketable skills and talents you’ve picked up along the way — many of which are readily exportable and necessary to other domains outside of blading that may only have marginally to do with your actual job description.

Things like counseling, community organizing, event planning, crowd control, writing, editing, HTML, kerning text, photography, photo- shopping, graphic design, woodworking, metal working, driving, or even — dare I say it — teaching, are all things that happen every day in the life of many rollerbladers, and those homemade skill sets are of tremendous worth to many employers. I say it’s high time we put our “on-the-blades” training to work for us.

Third — as this is where I’m going to get emphatic — is about your identity. Putting rollerblading — literally the word rollerblading — on your resume might help you (or others like you) come out of hiding. You’ll have to decide once and for all that you aren’t such a coward- ass namby-pamby that you’re willing to hide behind a vague label like “skater” that only eschews your identity and enables people go on assuming something about you that isn’t true — namely, the presumption that you ride a skateboard. Better still, it means that you’re unafraid of confronting the homophobic bigots who snicker like gaping idiots at a decades old “faggot joke” befitting of only the most servile and obsequious among us.

But, perhaps the real pièce de résistance here is breaking out of the “silver-bullet” mentality that has held blading back for so long. Too many bladers out there have spent too many years twiddling their fingers or searching lasciviously for a quick fix, a singular solution that will restore blading to some contrived notion of its former glory — whether in form of a would-be savior like Arlo, Haffey, or the X-Games, or in the form of an endless stream of inwardly directed edits and contests. There is no great or magical singularity that is going to step in and save us.

So do rollerblading a favor: look at your resume and see where blading can fit in on there. And if there’s not yet a place on your resume for it, look at what’s going on in your scene and ask yourself if there is something you can do that will help rollerblading that is also befitting of a resume, because if there’s a way to get it on there, it means you’re fit to make a real contribution, both to your own career AND to rollerblading.