Another Windy City Riot write-up, but this event is worthy of more than one report!

One thing the WCR is not: short. It is a testament to Collin Martin’s dedication to the growth of blading that he is able to run the Windy City Riot with only donations from individuals and a couple of sponsors (Eulogy, Roller Warehouse) who donated the prize money this year, and bladers who believe in and support the Riot. It only gets better and more refined each comp he throws.

I helped guest MC the Riot in 2006 (or maybe was it 2007, I don’t remember), but what I do remember was driving, finding parking, going to the spot, getting kicked out, back to the cars, driving again and repeat, repeat, repeat. In my opinion, this format was stressful for all involved — contest promoters, competitors and spectators. This year’s Riot took place all along Lake Michigan on a great day for blading with perfect weather. All spots were in riding distance by blades (or bike, if you were smart). The expressions on people’s faces seeing a motley crew of 150+ bladers cruising by — one by one — along the lakeside on this fine Saturday was very amusing. It felt like a traveling circus going from spot to spot, taking over every place we went. Onlookers, people in boats, even police stopped by to watch in amazement as the event went down. Not one bust or even asked to leave any spot. The lakeside was the best location for WCR.  Everyone I spoke with had a blast and I can’t wait for the 2013 WCR. 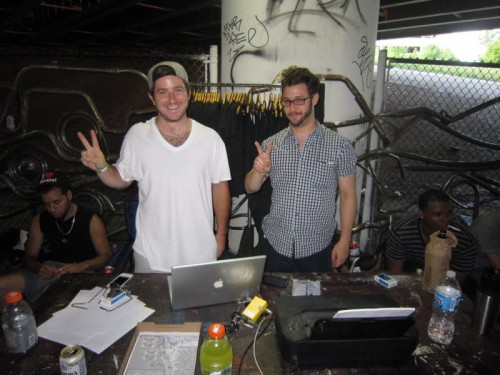 The event started on Friday with a park contest that was supposed to be held at Northbrook Skatepark. The Riot is a take-the-park-over event with no permits or permission from the park.  Not my personal favorite, but I still wanted to attend to support the Pull and the Illinois blade scene. The Northbrook Park District caught wind of the comp and contacted Collin to say “no way!” The switch was on to Logan Square Skatepark and the mass texting and tweeting began to spread the news. Logan, an under the bridge skatepark where anything goes, was probably the best option.  Slightly dilapidated ramps with a circle flow didn’t stop anyone from shredding and having a great time. A definite stand-out in the comp was Cheimy from North Dakota (don’t ya know?). Shane McClay (with the ill Scribe tattoo) took the Am division and the Pro division went to Michael Garlinghouse. 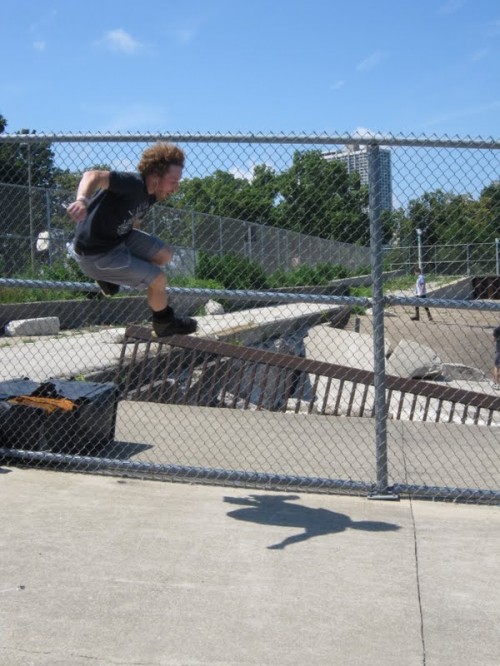 Saturday started around 1 pm with everyone meeting at a spot known as ‘the slabs.’ The Pull crew and GL Joe prepped the ledge so it was ready. Immediately the fuzz showed up, asked everyone not to block the bike and walking paths, and were off (Wow! Did that happen?). Rory Melehan was the stand-out at this spot, using the banks, fences and ledges in his classic abstract style.

Second spot was two handicap rails that were could be transferred. This is where Travis Rhodes and Steve Lerner did their thing.

The third spot was the most picturesque of the day with the Chicago skyline behind a launch ramp up to a flat rail with a small gap to the next rail. Paul John had some nice transfers and his amazing AO fish was my shot of the day.

The fourth spot was two ledges with a transition for boosting. Matthias St. John killed with some Big Boy 360s and Best Trick winner Ryan Sibbio came out with a huge gap 180 followed by a 540 over a large stair gap — and a nice maneuver to stay out of the lake.

The fifth spot was the ever-popular, no joke Flat Land (soon to be named the Melehan event — he won it!) The high jump was won by the homie Dwight Harding at around 58 to 60 inches high! Mini yachts stopped by to watch and cheer on a small pier leading to the boat docks.

The final spot was a crazy kink rail that leads to a walkway tunnel under Lake Shore Drive.  Michael Froemling, Paul John, Jeph Howard and Garret Mitchellin were the guys brave enough and with enough energy left to keep blading. Garret ended the contest and brought the crowd to their feet with a 360 top soul. Normal events would have ended then, after a small pow-wow with the judges, not the WCR though!

The next spot was a beautiful beach to take a swim (or so I was told… I had to eat and get some coffee to get a second wind!). The final stop of the day was Wilson Skatepark, where everyone who had been watching all day (including yours truly) got to throw down like groms after watching their favorite video. I had carried my blades around all day and by then, damn it, I was going to use them!

If there’s one thing that can be said about Collin, it’s that he’s thorough. He set up a generator, table, laptop and projector for everyone to view the voting from a quarter bowl in the park. The WCR judges narrowed the top seven bladers of the day for the finals and then the interactive voting began. All awards and final results were then chosen by the people via text message. It was pretty cool, although long. Thanks to T. Rhodes for helping an old guy figure out how to vote! In the end it came down to Travis Rhodes and Steve Lerner! The percentages were going up and down and finally hometown hero Steve Lerner (with 53% of the vote) took the $2000 grand prize along with the 2012 WCR bragging rights.

By the time the event was over it was 11 pm (we started at 1pm!). It’s over, right? Nothing is over until we say it is…  Was it over when the Germans bombed Pearl Harbor (channeling my inner Belushi to keep going)? Shower, shave, food and off to The Pull’s second office and hold-down spot.

Next was the VFW — that’s Veterans of Foreign Wars. Collin had told me about this spot and I have been to a couple of VFWs before. This one was like no other: pool table? Check! Cheap drinks? Check! Smoking indoors (much to my dismay)? Check! With karaoke and a cool crowd of diverse people (and bladers) it made a great end to the day. 5 am was closing time and off to watch the sun rise over Lake Michigan with my crew Ian Bumphrey, Todd Trosper and his girlfriend, Ashley. It was truly a great day for BLADING! Thanks to everyone I met, the Pull crew and competitors! 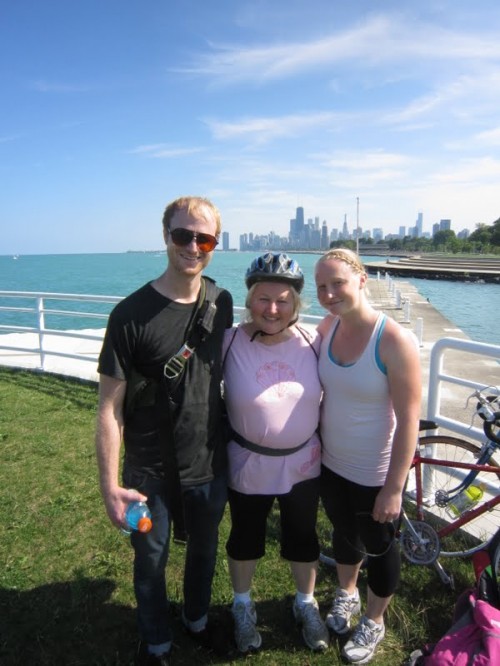 Here’s the link to my Windy City Riot slideshow.

The genius store callde, they’re running out of you.