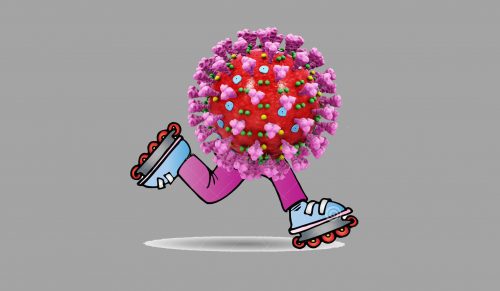 Have you heard the news? Rollerblading is back!

Once thought lost to memory, pukka shell necklaces and wide-legged jeans, it seems all it took was a global pandemic clearing the streets of prying eyes and ever-mindful cell phone cameras for people to give up their fear of humiliation and return to participating in the forgotten act of inline skating.

I’m not judging, but there’s something hilarious about seeing someone rollerblading down Broadway with a huge dumb grin on their face in the middle of a global pandemic

I’m not mad about it! Far from it! It’s awesome. There are so many stories where blading is getting a mention — and that’s not happening because legions of news people, reporters and freelance writers have been waiting to out themselves as secret inline fans. Can you imagine the career suicide these people risk by doing something like that?!

Nothing will stop shirtless rollerblading guitar guy. Not even a pandemic (my friend found this pic on reddit) #yeg pic.twitter.com/g5Mx5hA9N2

No, sir. blading is showing up everywhere because it is literally showing up everywhere. It has re-emerged from the dusty secondhand bins and basement closets to bask in the public’s growing awareness that, holy shit, it’s really fun to roll. Empty the cities and cut down on traffic and it’s even better.

Because there’s a sad truth to the reality — there may never be a better time to skate. Sure, we’ll all get to have our friends and high fives, daps, slaps, and all the rest that we miss like crazy. Up close fisheye freaking and just being around other human beings. That’ll be nice! But when we go back to that, the cars are coming back, the pedestrians, the security and all that. 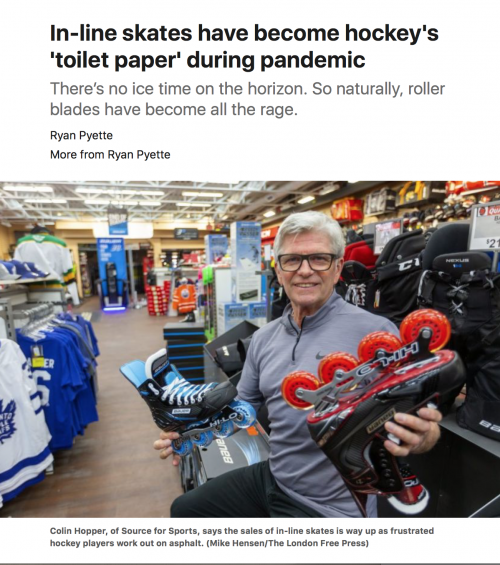 In the meantime we’re the new toilet paper. See guys? How nice is that.

To that end, we rounded up some of our favorite blading shout outs in mainstream media, all thanks to a deadly virus that’s killing thousands of people everyday in the US alone! It’s a shitty thing for sure, and very strange that something so bad for so many could ultimate be beneficial to inline skating. But here we go: 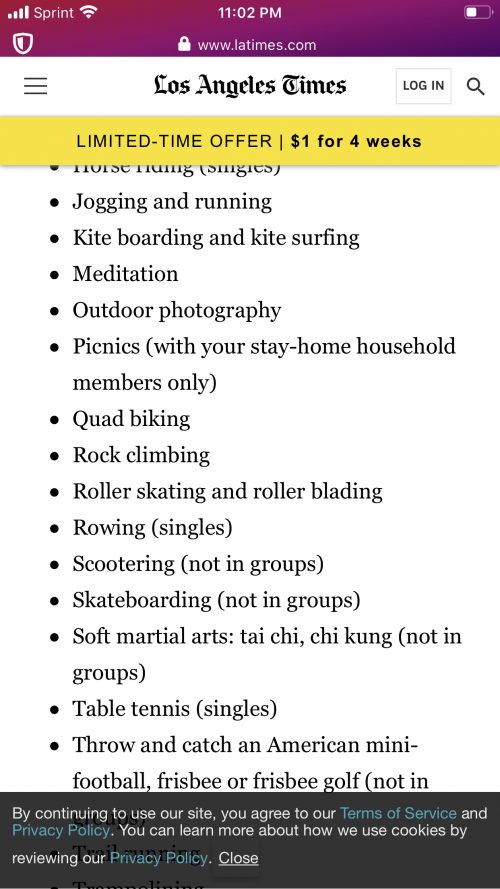 This is classic. See how all these activities are listed, along with a parenthetical note on “singles” or “not in group”? The editors felt it was unnecessary to stipulate that anyone inline skating need to avoid a group — they’re like “These dummies don’t have any friends anyway!” 😂 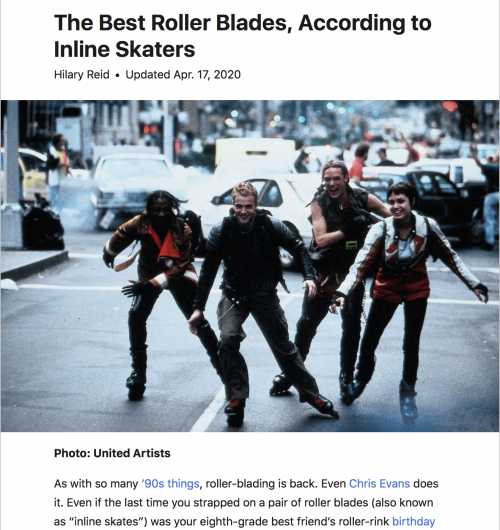 Besides the header photo from “Hackers,” this article is legit in so many ways. First, it mentions Arnav “Sonic” Shah the NYC instructor and racer, and Brian Long of Shop Task, so there’s that. It also shows a legit cross section of skates… 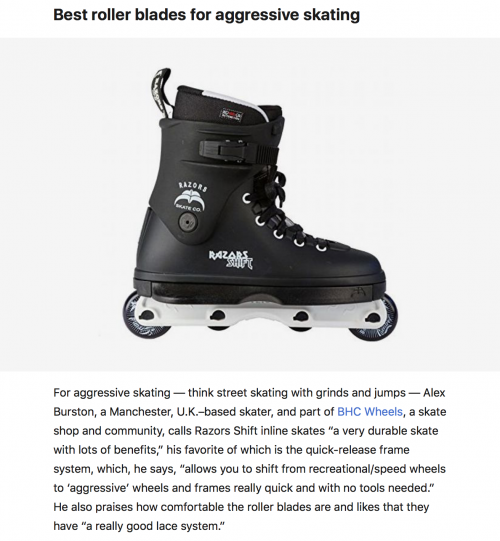 …including two aggressive skates! On the nymag.com website! I know people are throwing around the word “coup” an awful lot lately, and let me tell you this is way, way closer to actually being a coup than anything any Youtube person is selling ya. Way to go everyone!

3) NHL Players Are Out On Blades 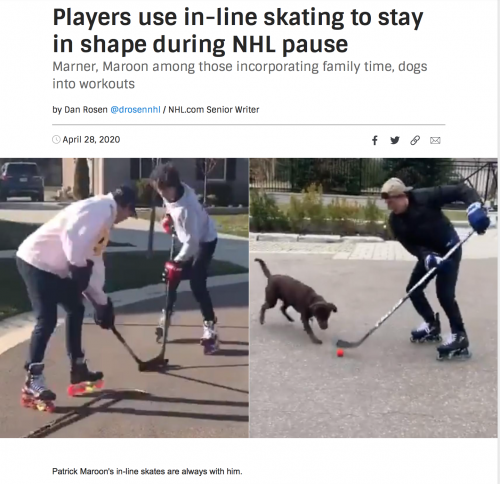 You knew that everything old was new again sometime, right? Well here you go. Like the exact way that inline skating came into existence in its modern form, ice hockey players are rediscovering the sport as a way to keep up with skating skills while they are off the ice. It’s too bad a couple athletes mentioned in the story chose to distance themselves from blading. Boo this man! 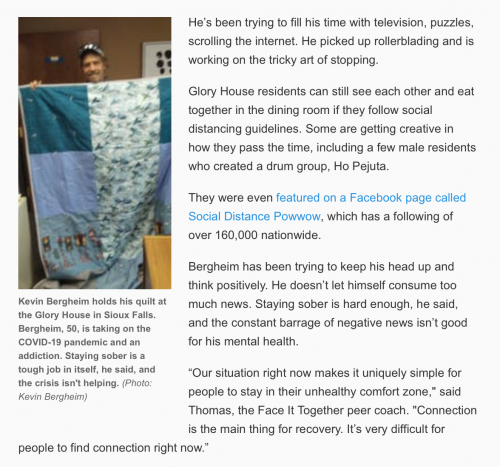 This one really warmed our heart, especially considering how many skaters we’ve lost in recent years to drugs and addiction. It seems even in South Dakota that blading is finding new fans, like this gentleman that has picked it up to fight the boredom caused by his current situation. Besides the boredom he’s getting good cardiovascular exercise and filling his body with endorphins. Way to go, Kevin. Keep it up!

5) Skiers Are Noticing Too 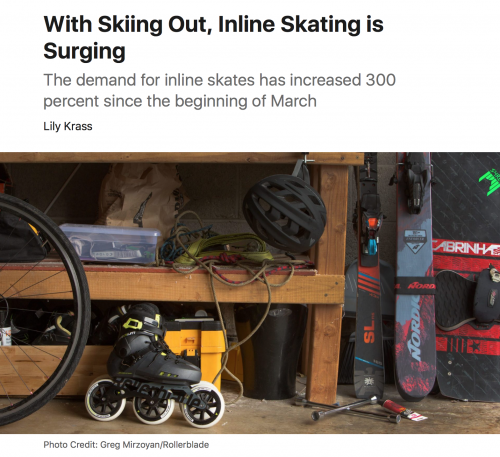 Following in the “history repeats itself” vein, skiers are taking to the streets since the slopes are closed, and Powder Mag says that demand for skates is surging like 300% since the virus crisis took hold. Since this is a ski mag they talked to K2 and Rollerblade, which means our good friend Tom Hyser gets some well-deserved press time to spread the gospel. Way to go, Tom!

Yes! You are correct! These are promising developments, but it is worth wondering where these new blade enthusiasts will go when life comes back. Will they forget about blading like they did before? Or will the landscape of the 21st century’s social media climate, and a more universal desire to be unique or find the new thing, continue to push people into our community? No way to know. But what we can all do is enjoy the moment, support our shops and brands, and be ready to welcome new faces and flavors into the mix.

How else do you plan to save rollerblading?