Like many other world-class events being held around the planet, The Pandemic put a hiatus on our 2020 event but we were determined to come back bigger and better than ever in 2021 with two whole years of fundraising efforts under our shoelace belts. We pulled the trigger at the beginning of June to commence planning and didn’t have a back-up plan should government restrictions/health measures change. We were clinging to the last thread of our axle bolts but the stars aligned, sponsors were secured, and obstacles were built despite the ever-climbing lumber prices.

There’s no denying that Inline skating is as diverse now as it’s ever been. We see this diversity not only in the wide-range of skate tech available to today’s skater but also in the many local skate scenes and personalities throughout the world.

We thought it would be a fun idea to get a couple different perspectives on our event, the 2021 Shredmonton Inline Summer Skate Series. Our first perspective is from Maria Kim, an inline skater from Calgary that’s relatively new to the blade game having strapped on skates in 2019. Our second perspective comes from Riley Maruyama, a true-Canadian OG blader back in the game after a lengthy pause. Let’s relive their experience at Canada’s biggest inline skating competition… – Danny Thepsouvanh (@dannytheps) 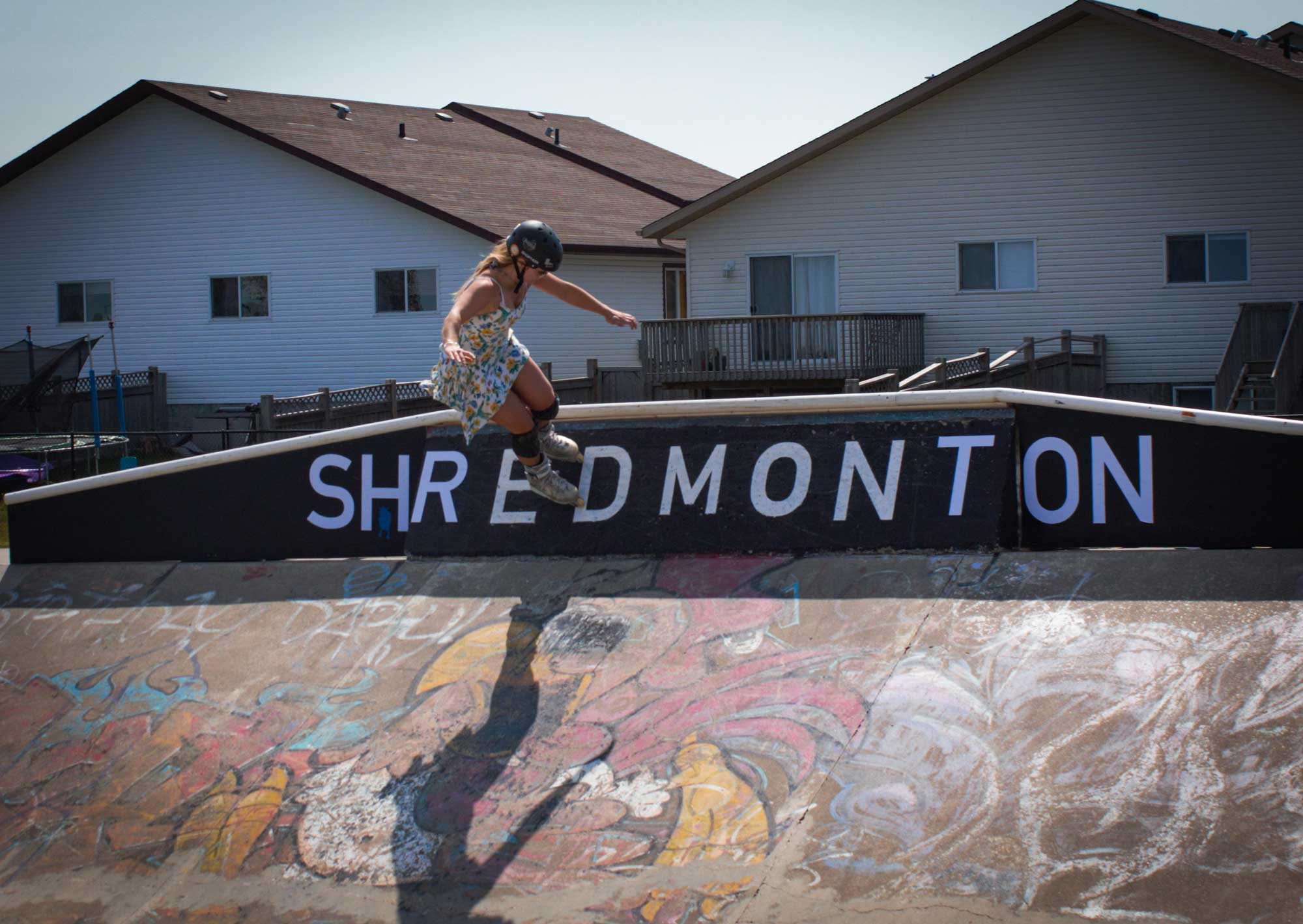 Hi Maria, thanks for agreeing to chat about the 2021 Shredmonton Inline Summer Skate Series. We were hoping to get your perspective on the event as we understand it was your first inline skating competition you’ve ever attended. Can you briefly describe how the day went down for you?
For sure! I honestly wasn’t sure what to expect. It was nerve wrecking at first, but that soon settled into unbridled joy and excitement when I realized that I had the opportunity to see the best-of-the-best skate their best. Being able to watch my YYC (Calgary’s 3-letter airport code) skate fam show off their best tricks was incredible as many of them usually tone it down or are taking time to help teach me and others during our Wednesday Night Skate sessions.

Skating in the event itself was both exciting and scary, definitely a different kind of pressure to come up and execute a sweet line compared to spending hours just nailing one trick on one spot.

Can you expand a bit more on skating in a competition setting versus skating at a session? Were you able to use the excitement/scary feeling/nerves to your advantage?
I think it mostly made me realize that there’s a huge difference between ‘learning tricks’ and knowing how/when to use them in a line. It truly is kind of an art to make a line smooth, but also stylish. You need to keep in mind your position on entry, your exits, and ultimately your endurance. 45 seconds is a long time when you’re skating hard with no breaks.

Personally, I think the nerves got the best of me. I opted to play it safe in the qualifying rounds to stay unscathed to hopefully make it to the finals and pulling out something bigger then. I definitely did not realize how gassed I would be by my second run. I definitely learned to give’r a bit more with a strong start and hopefully follow that up for the rest of the comp.

That sounded like a solid game plan! It is definitely a balance between hitting tricks you know you can lace and pushing yourself out of your comfort zone. What did you think of the Women’s Division overall? Was the level of skating what you were expecting? What were the vibes like between competitors?
There was definitely a diverse range of skill, from sponsored/seasoned veterans to those who were relatively new to the skating, so a bit of a skill gap was expected. I think it would have been cool if there was a separate rollerskating division as well as there were a few skaters who actually do both and would have loved to compete in both set-ups.

This is certainly something we can explore in future renditions of the event. What can we expect from Maria Kim for the 2022 Shredmonton Comp? Will you land that KG in competition?
2022 Maria will be close to being done grad school and less stressed. I’ll be working on topsides next, getting more comfortable with coping tricks, and hella airs (I want to fly like Teach aka Sheldon LaPointe). If the flips gods are smiling on me that day, perhaps I’ll lace a misty too! And hell yeah I’m going to land that KG next year!

That’s awesome, we certainly look forward to your future involvement! Is there any advice you would give to someone who is just starting out in skating, not unlike yourself these past couple of years?
If it seems scary at first, you’re probably doing it right.

Skating is a balance of trusting your body and easing into unfamiliar sensations.

Skating for me is 10% fun/fitness/challenging myself and growing in ways I didn’t think were possible and 90% community. Find your skate fam, not only will you progress faster but skating is funner when you’re surrounded by awesome people.

That’s some really solid advice. Having a community behind you makes all the difference. Are there any parting words or shout outs you wanted to give before we sign off?
Thank you Shredmonton for the hosting the event and giving us a sense of community. I honestly can’t imagine my life without skating now and seeing the hardwork Shredmonton and others do to spread the joy of inline skating really warms my heart.

I want to shout out everybody; I LOVE YOU MOM (aka Ashley). #bertabladiesforlife can’t wait to shred with you more Lonita Graham. And Julian O’Connell brought it at the comp, can’t wait to see what he brings next year. Also thank you to Stefan Vajsabel for teaching me how to backside the day before the comp! 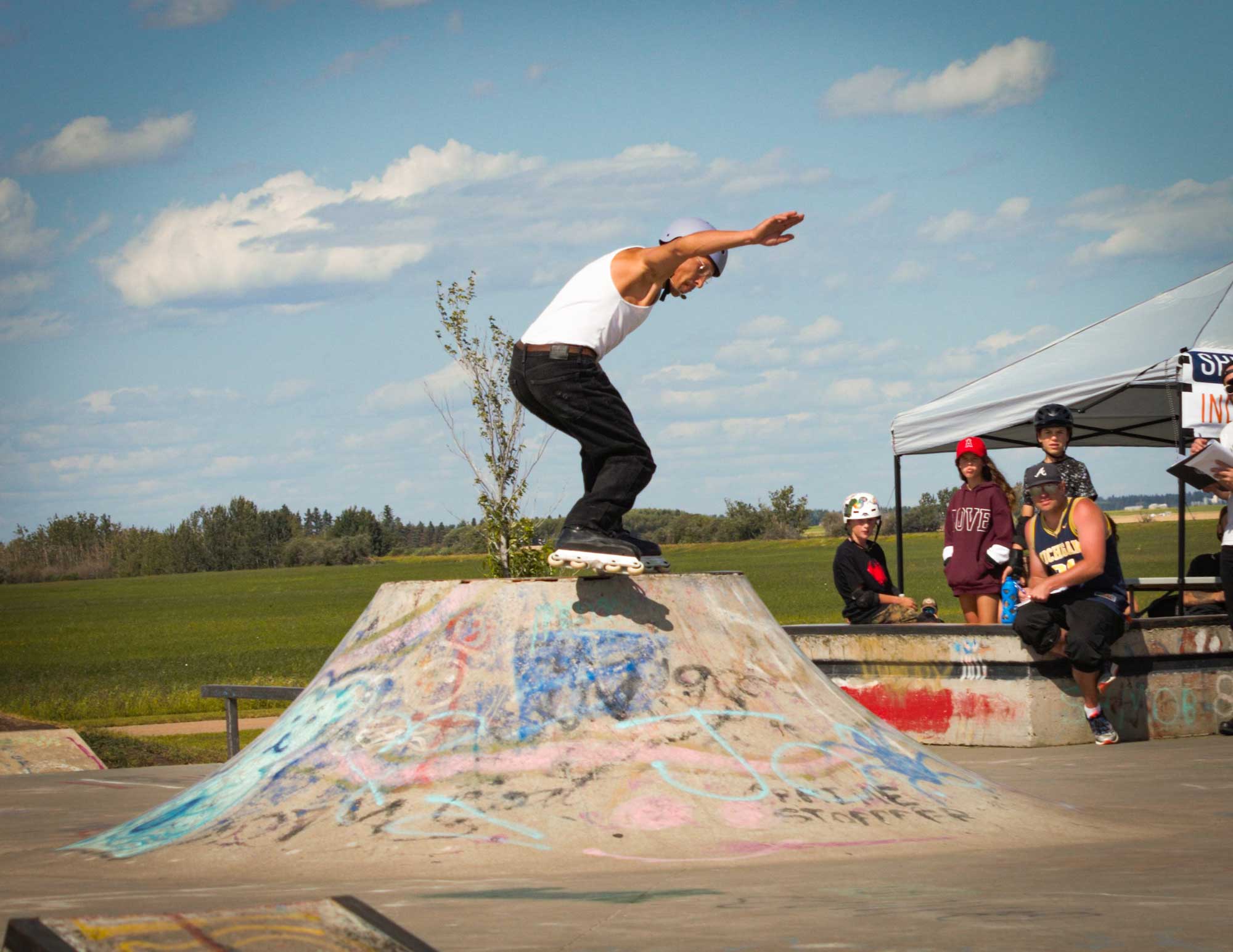 Riley, thanks for agreeing to do this interview. Lets start with some basic information. Who are you, where are you from, and how long have you been skating?
Heyo! I’m Riley Maruyama, living in New Westminster British Columbia, and I skated throughout my youth. I haven’t kept fully active in skating, but I usually get out to skate with my friends a few times each year.

Awesome. We were just getting some different perspectives about the 2021 Shredmonton Inline Summer Skate Series. How did you hear about it? What made you want to attend?
Danny Theps gave me a ping about it, and I wanted to come out and help/visit with the crew. One thing I’ve missed over the years was going to a skate comp like The Popularity Contest or the Outaline Throwdowns. Hearing that Shredmonton was keeping the torch lit was awesome! 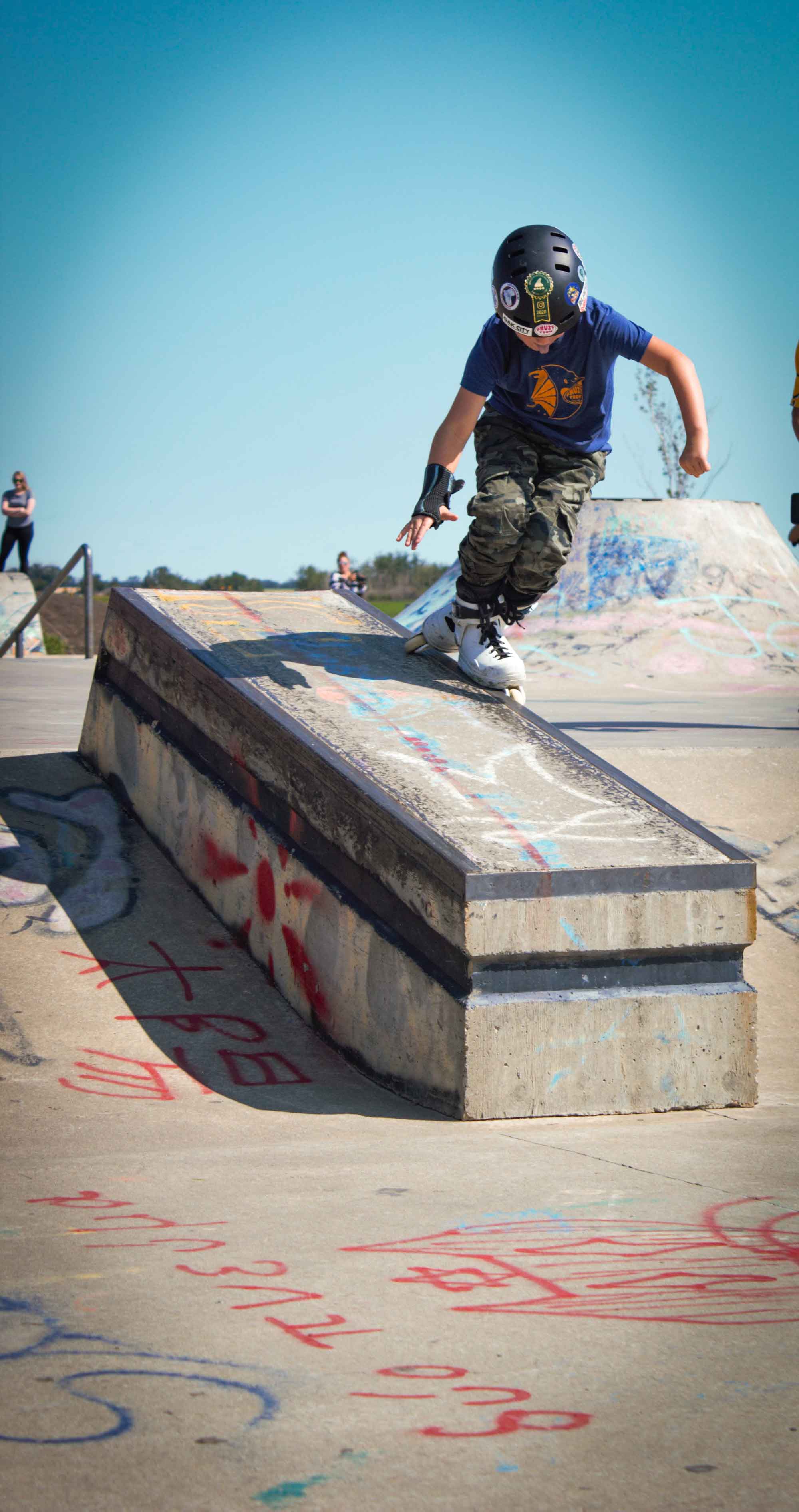 How did the event play out for you? Give us a quick break down of the day.
The day was amazing, you could see how so many people pulled together to make this comp happen. It was a big step up with Miguel De Jesus himself setting up the epic sound system and Chase Gardner’s company Edmonton Production Rentals hooking up the live stream of the whole comp for the whole world to watch.

The skating was awesome to see, I really liked how you guys included the rollerskaters to compete with the same judging criteria as the bladers. And it was incredibly impressive to see the young bucks throwing down both tech grinds and big airs.

I’d say it was a first for me seeing a women’s division and a kids division in a comp, and it was good to see that blading is growing up in Edmonton.

For the open division there was a lot of variation that spanned from the classic tech aggressive skating and the crazy big flips and airs. It was different for me seeing Wizards in comp, Shaun Unwin was running with a five wheel set up in his run which was fun to watch

Sounds like a great day! What would you say was the high light of the event for you?
It was! Alac Rice doing a fakie front flip was just mind boggling, I haven’t seen that before. Especially with it being off a flat ledge (from what I recall) Yeah that was incredible to watch, Alac is quite the athlete.

As someone who’s coming back to blading after a few years off, what surprised you most about skating in the “modern day” that has either changed from when you skated or maybe just something that you didn’t know could be done/existed?
I think I just appreciate that there is an openness to a lot of different types and styles of skating now, and I think that the blend will lead to more creative opportunities. Plus skating the paths across Edmonton the day after was fun, just to roll and enjoy seeing the city by ripping around on blades.

Well said, it seems that the mindset of most people is also more open to different things and aren’t being influenced by other alternative sports as much as they were in the late 90’s/early 2000’s.
Lastly, will there be a Visual Symphony sequel and when will it be released?

Lol, probably not by me. But I’m looking forward to seeing more videos by the bladers out there 🙂

Shredmonton Inline is a non-profit group based out of Edmonton, Alberta, Canada who’s objective is to promote the health and community benefits of inline skating. 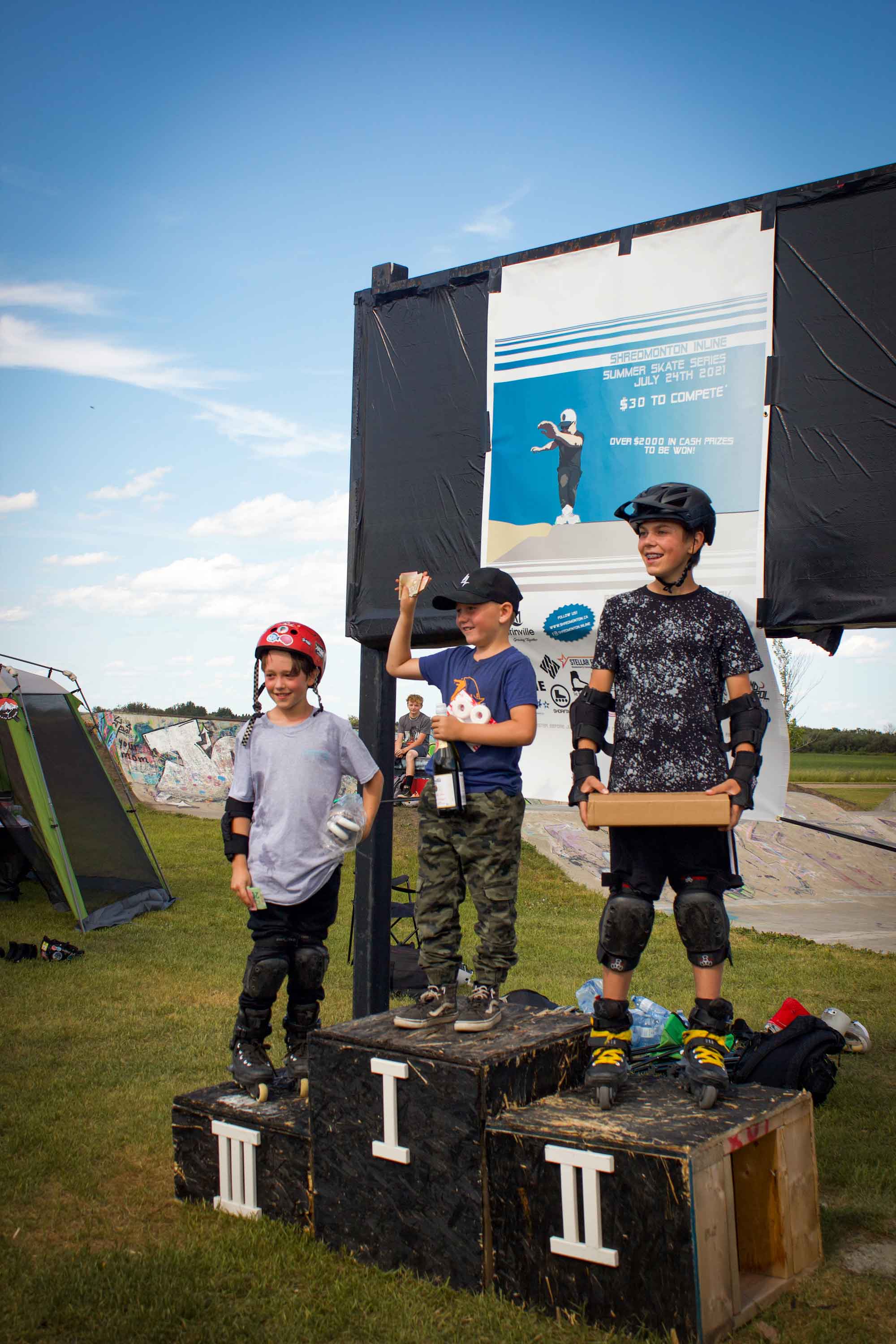 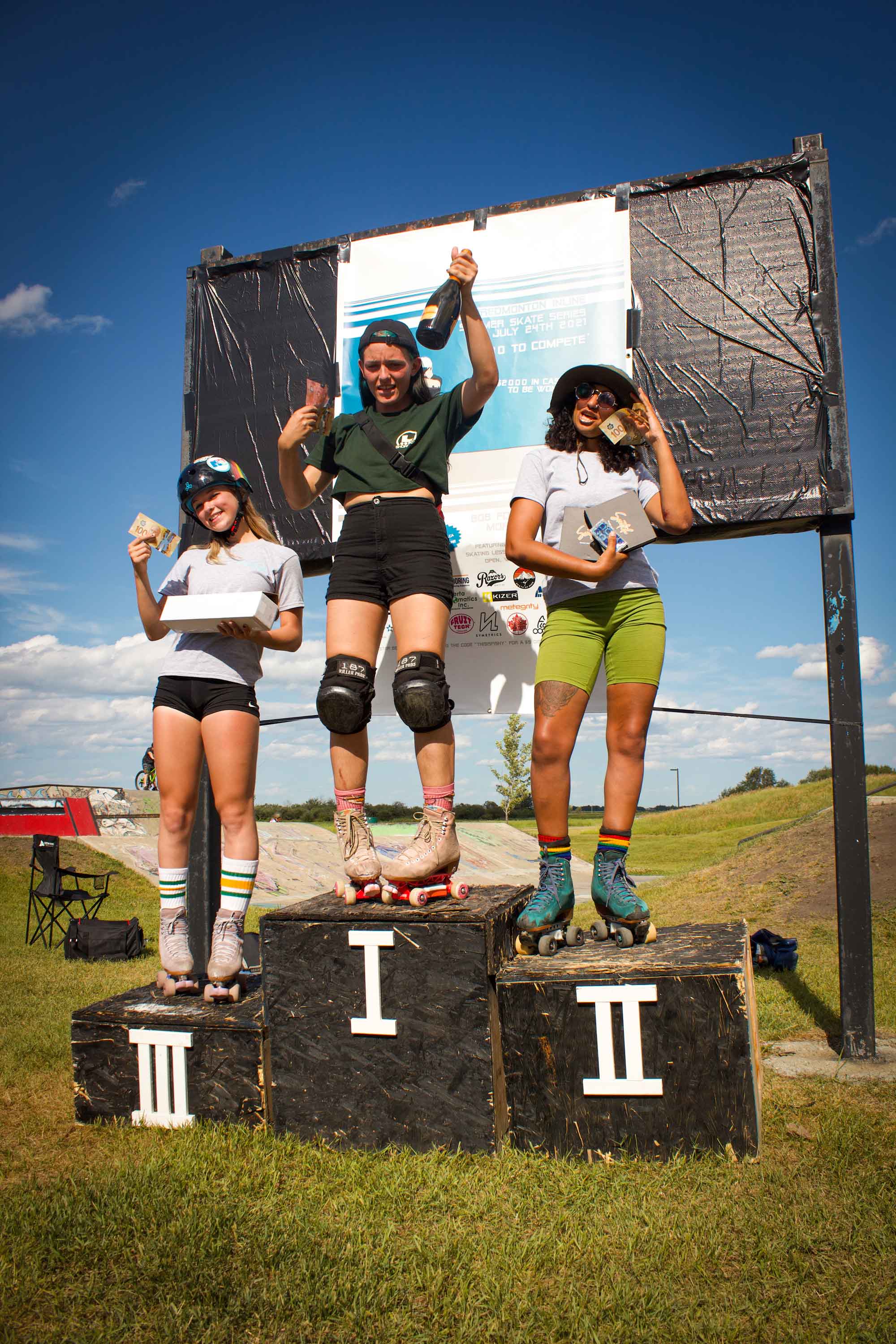 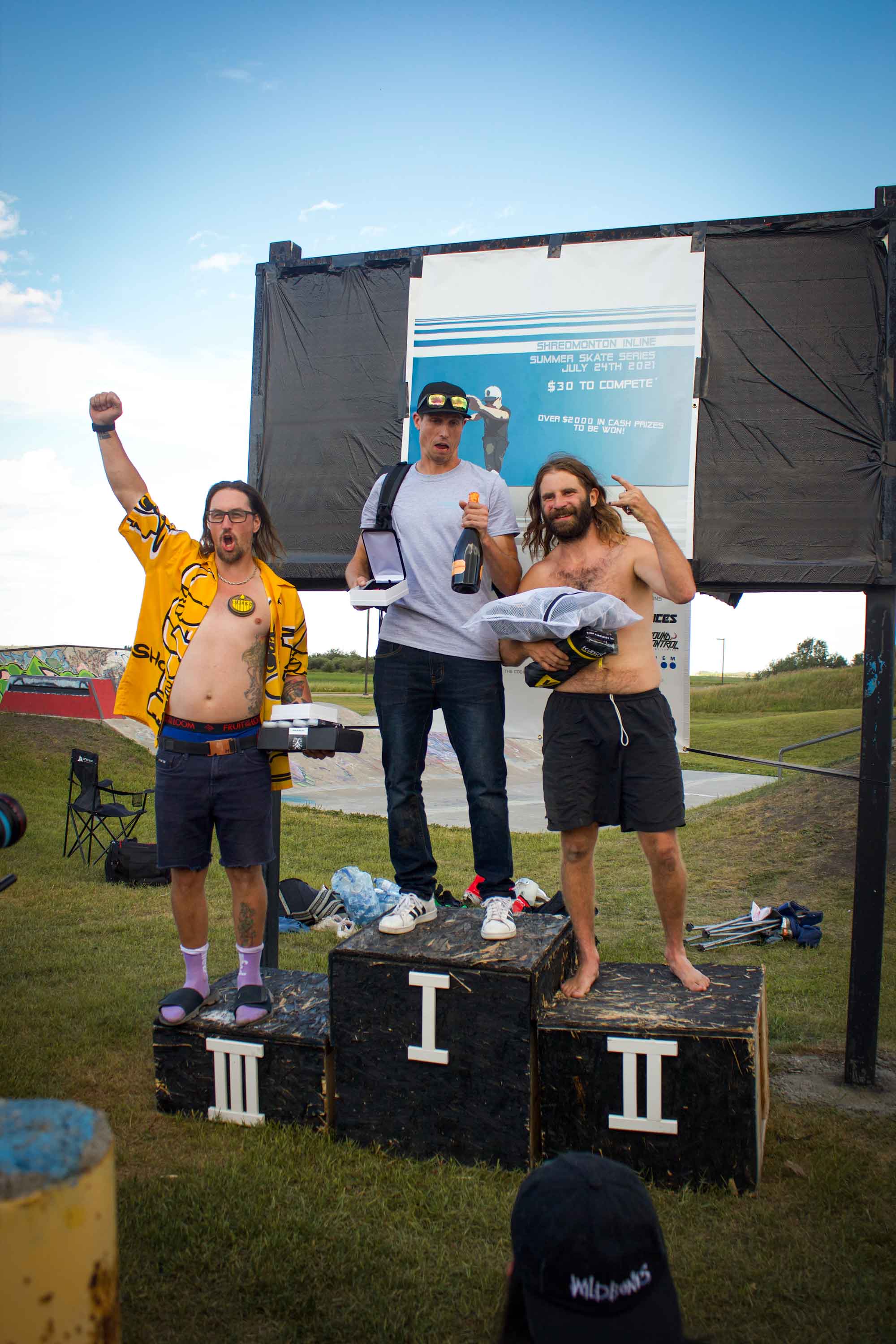 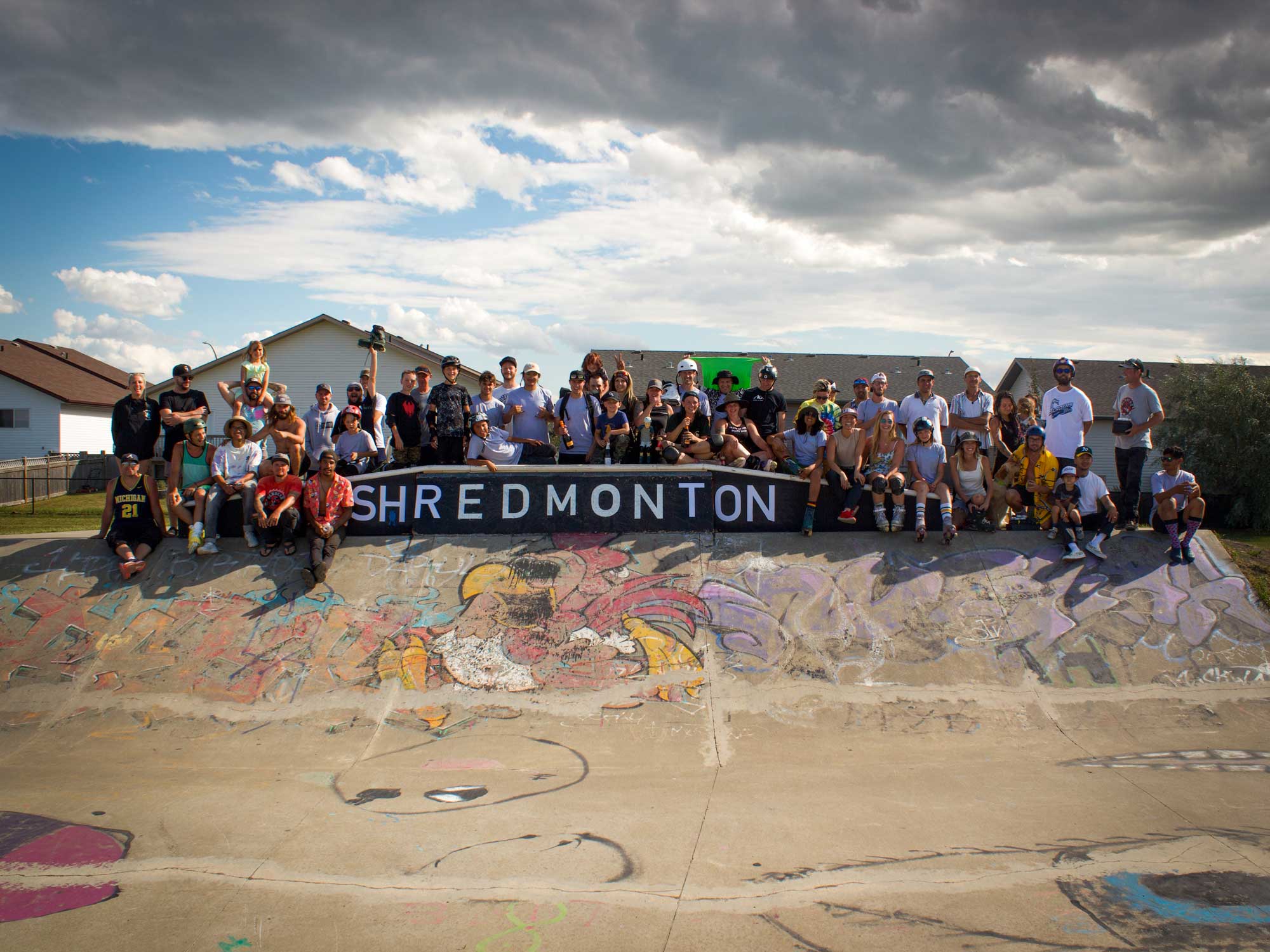