As has become blade tradition, on the first weekend of November some 300+ competitors from all across the world descended on Santa Ana, California for Blading Cup. This fall event following the first-ever spring event in April made 2022 the first time there had ever been two Blading Cup events in the same calendar year. And like each event before it in this long-running series, the fall 2022 event was even bigger, better, and a visible representation of the maturation of our grassroots scene that serves as a sort of benchmark for how much growth we have experienced year-to-year. For these reasons and more we owe a collective thanks to the core Blading Cup group of Jon Julio, Jason Reyna and Miguel Ramos for all their hard work and continued efforts. So with that in mind check out these photos by Steve Steinmetz of Sunday’s Veteran and Pro events. 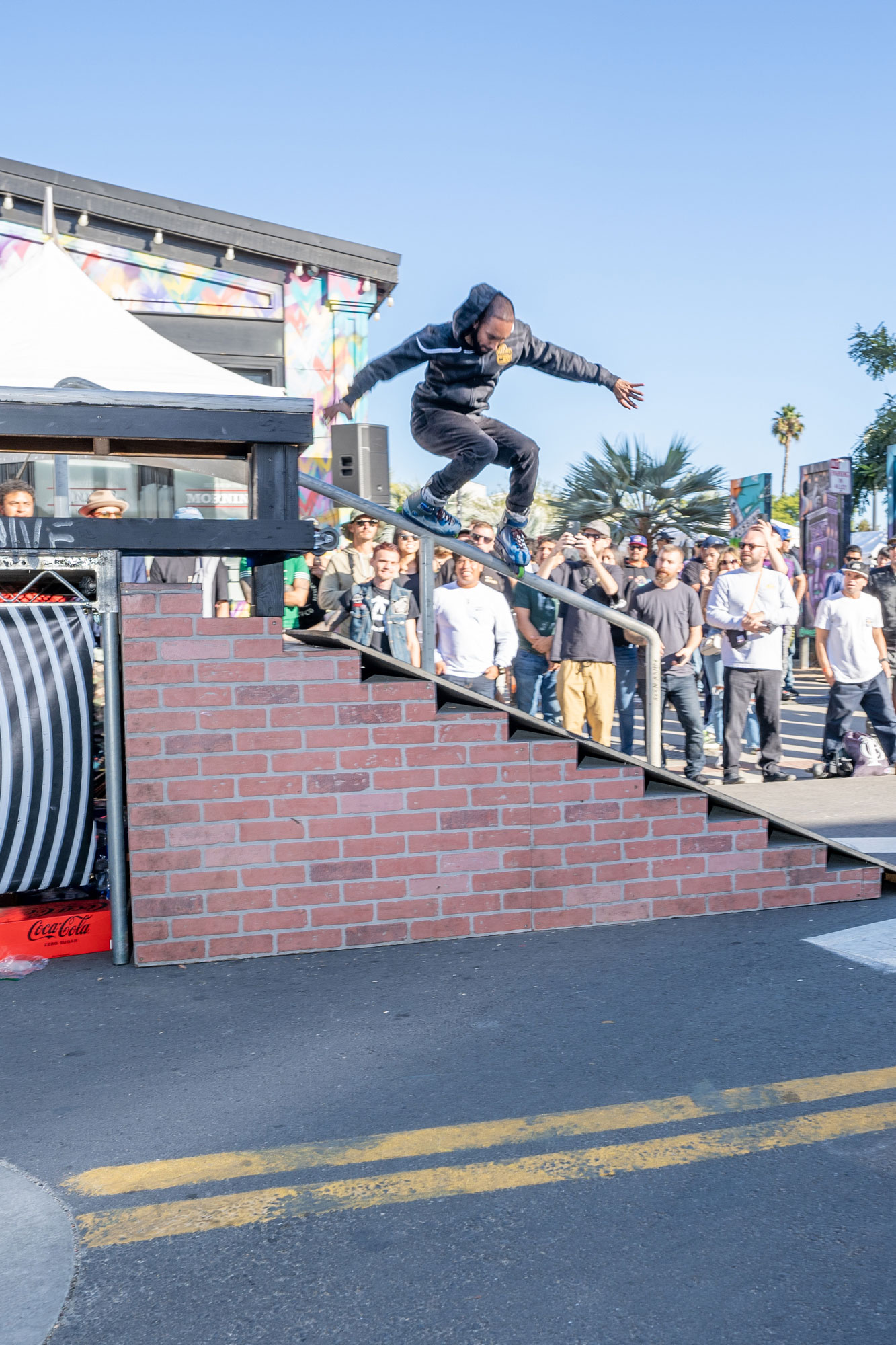 We’re pretty sure that Abdiel said this was his first time at Blading Cup, which is wild! If that is correct he made one hell of an impression with smooth maneuvers like this one. 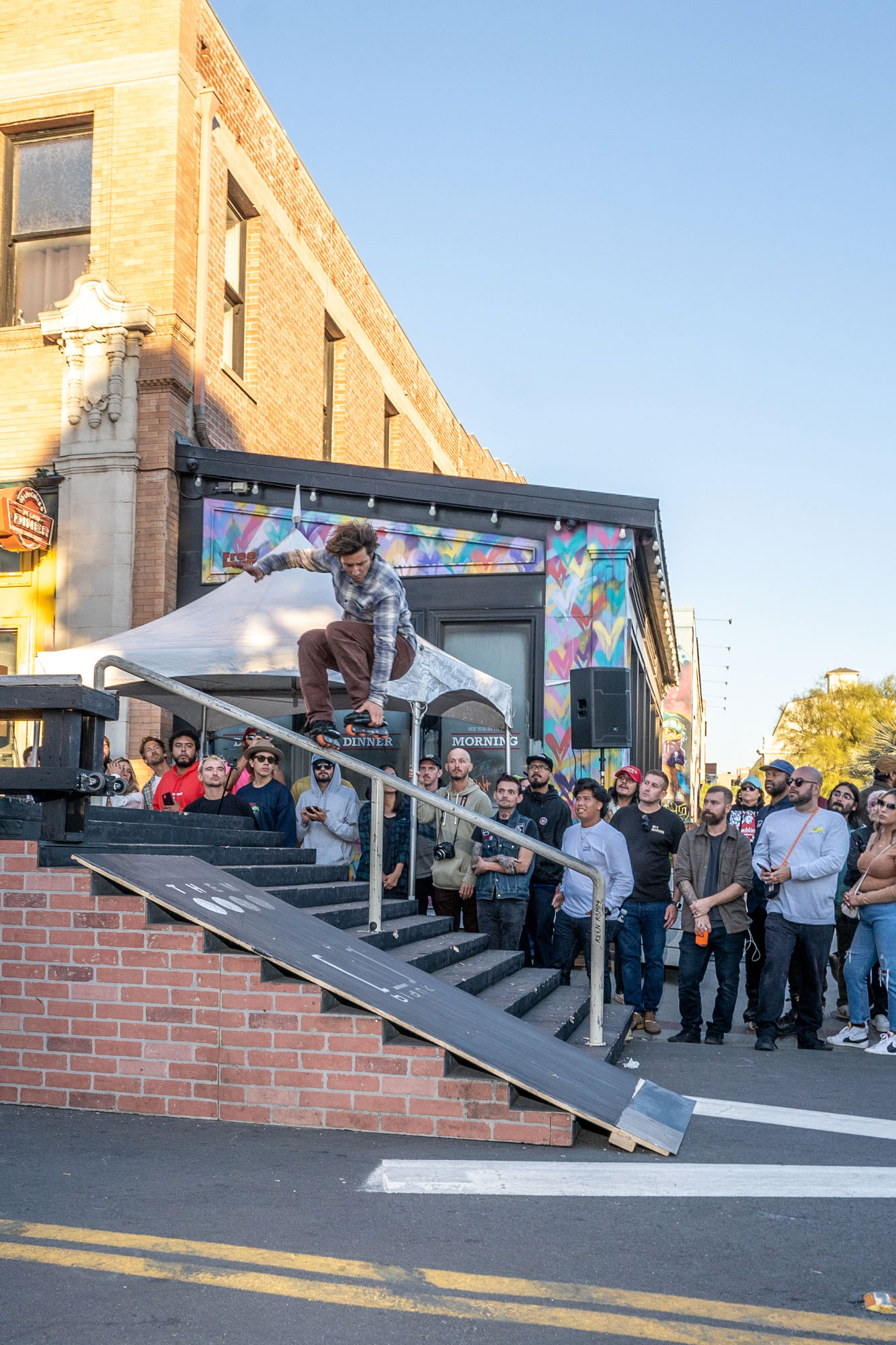 It’s hard to say whether this is natural or switch because with Hayden you can never really tell. Dusty the Dog’s daddy and the big wig at Dusty Denim making solid use of the slider bar. 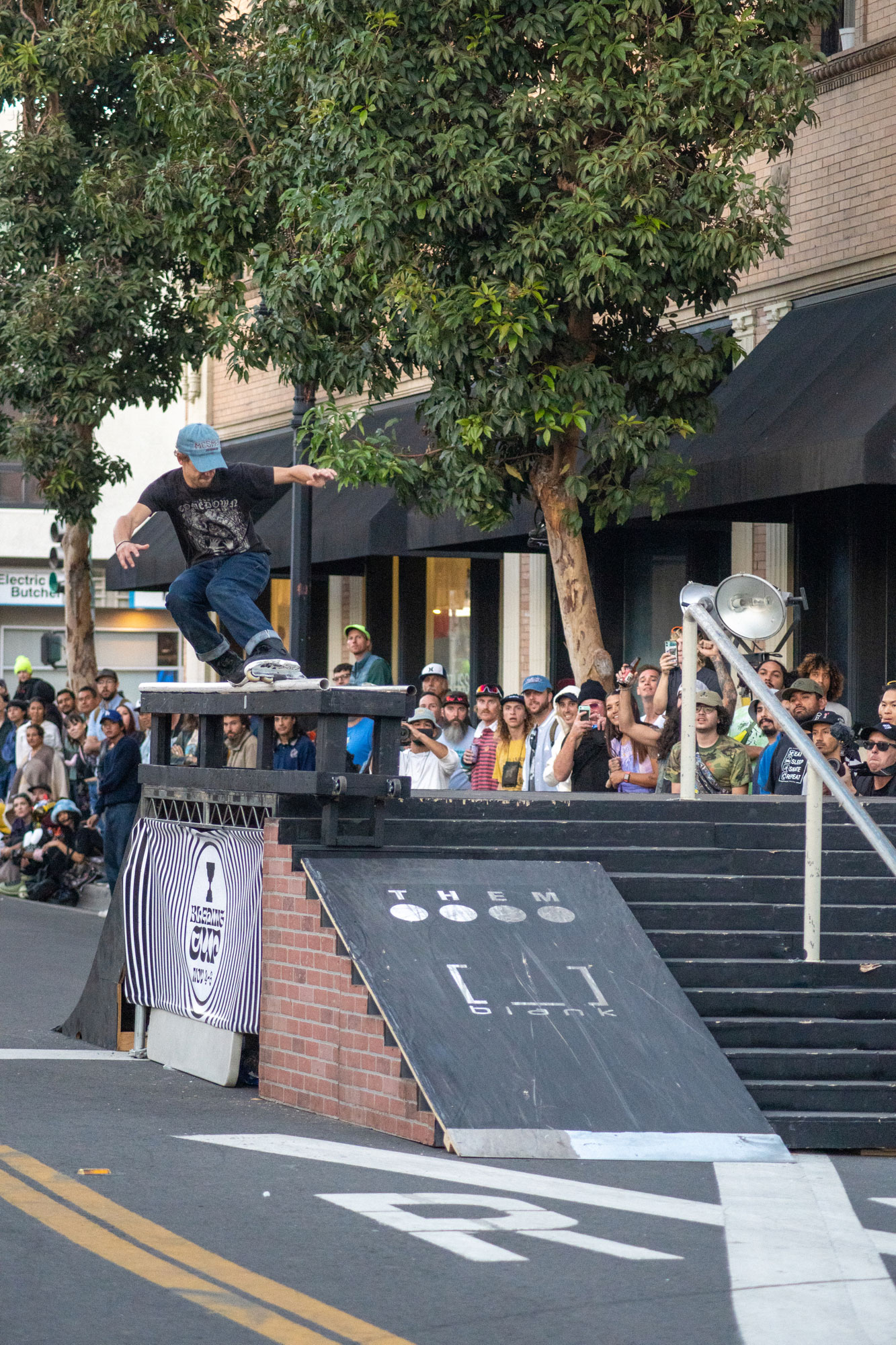 This was Mick’s last trick in his run after landing like five tricks back-to-back in a sweet line back and forth across the course. The 270 out with authority was a fitting end punctuation. 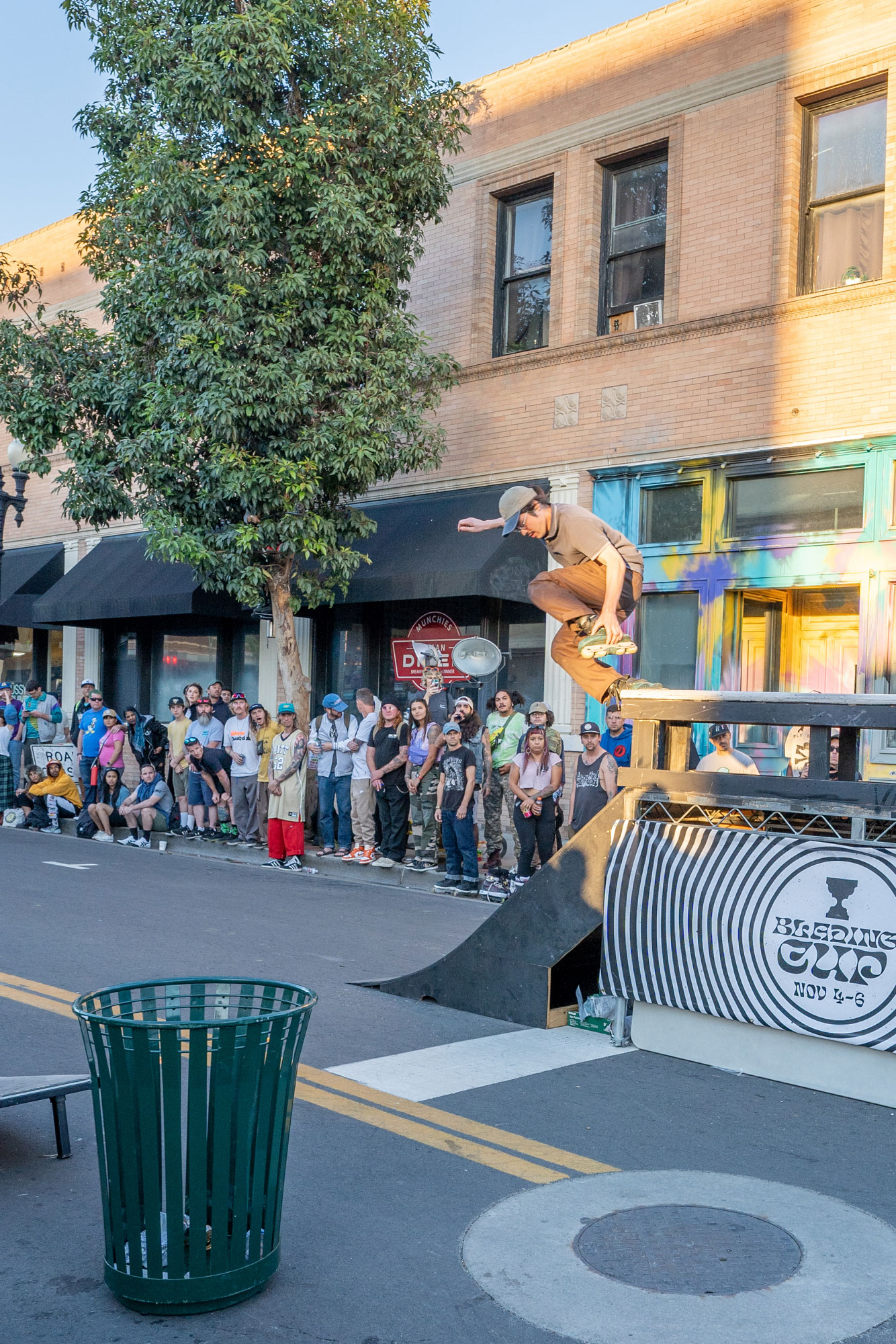 Considering this is Kenji Yee, he very well may have cess slid or come out 270 to fake but alas our memory is crap and this silly image doesn’t move. 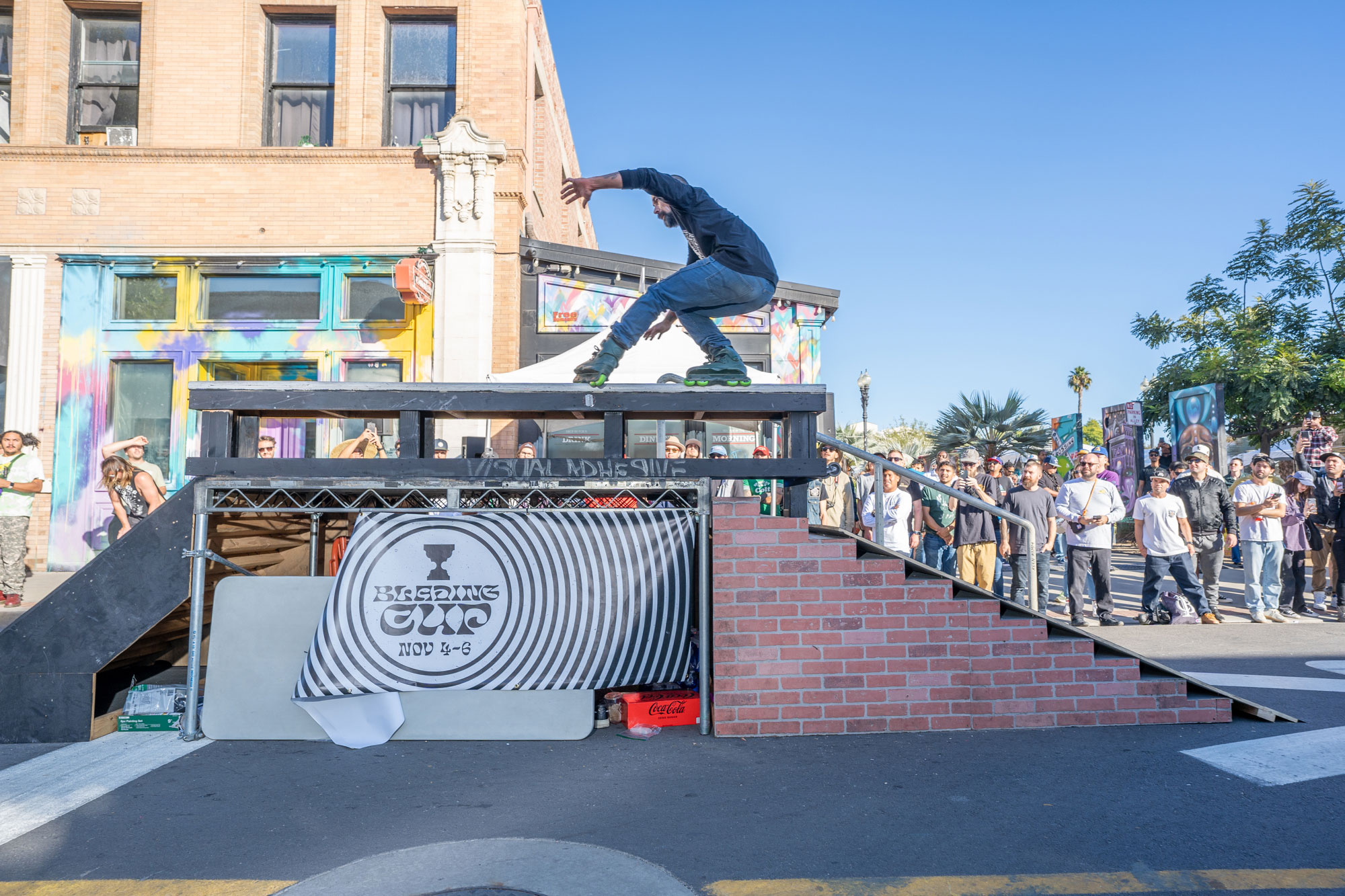 OG Escozoo legend Eric Schrijn laid down several solid moves during the Veterans comp and this launch to farside soul to fakie was one of them.

A few hours before he took the win, Nils was testing out features and figuring out the physics of propelling his body over the deck and down the rail. 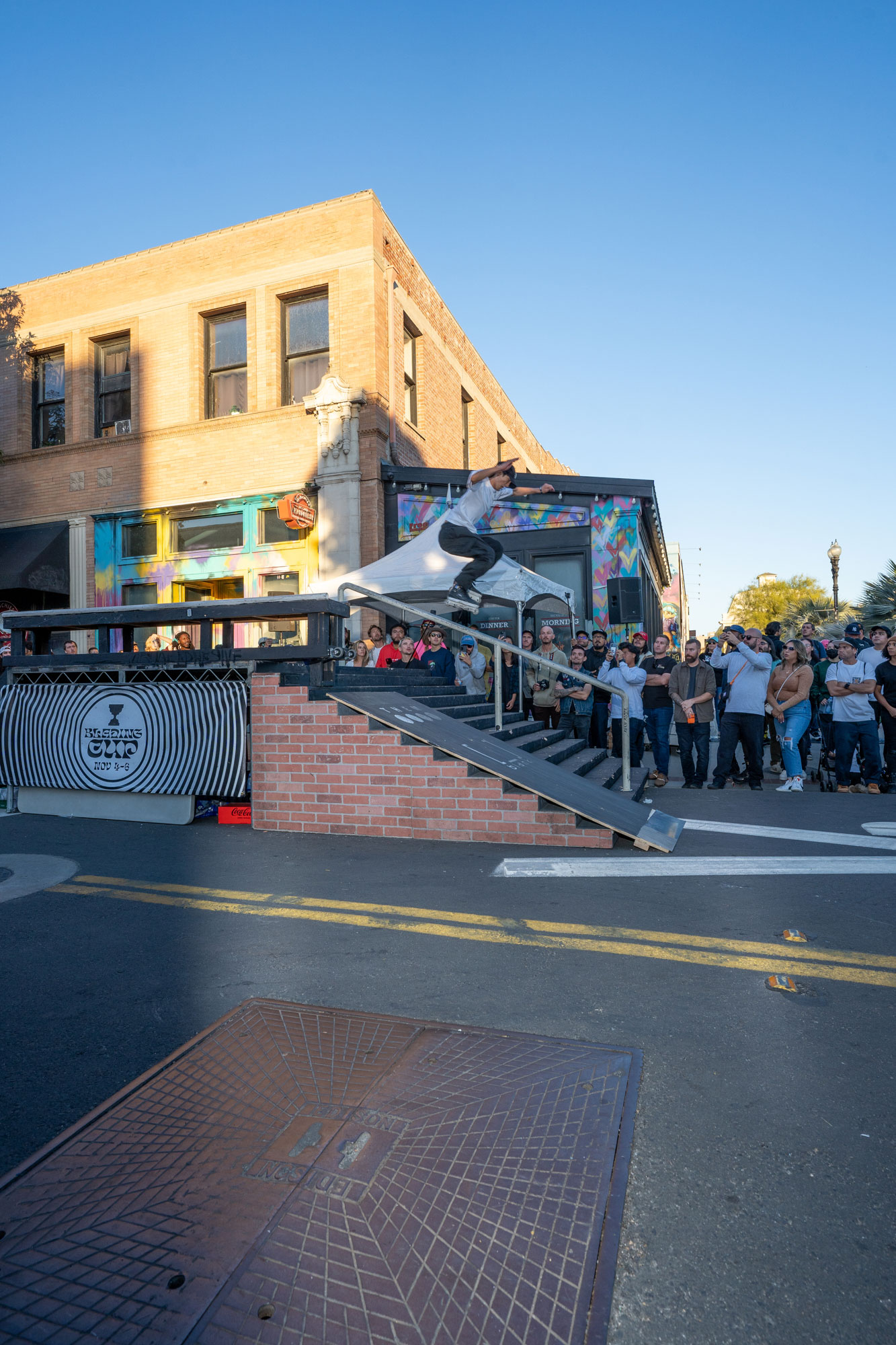 Young talent Jay Yoon took second place with solid moves like this one that showcased the vocabulary and consistency of a blade with many more years of skate development to come. It’s going to be incredible. 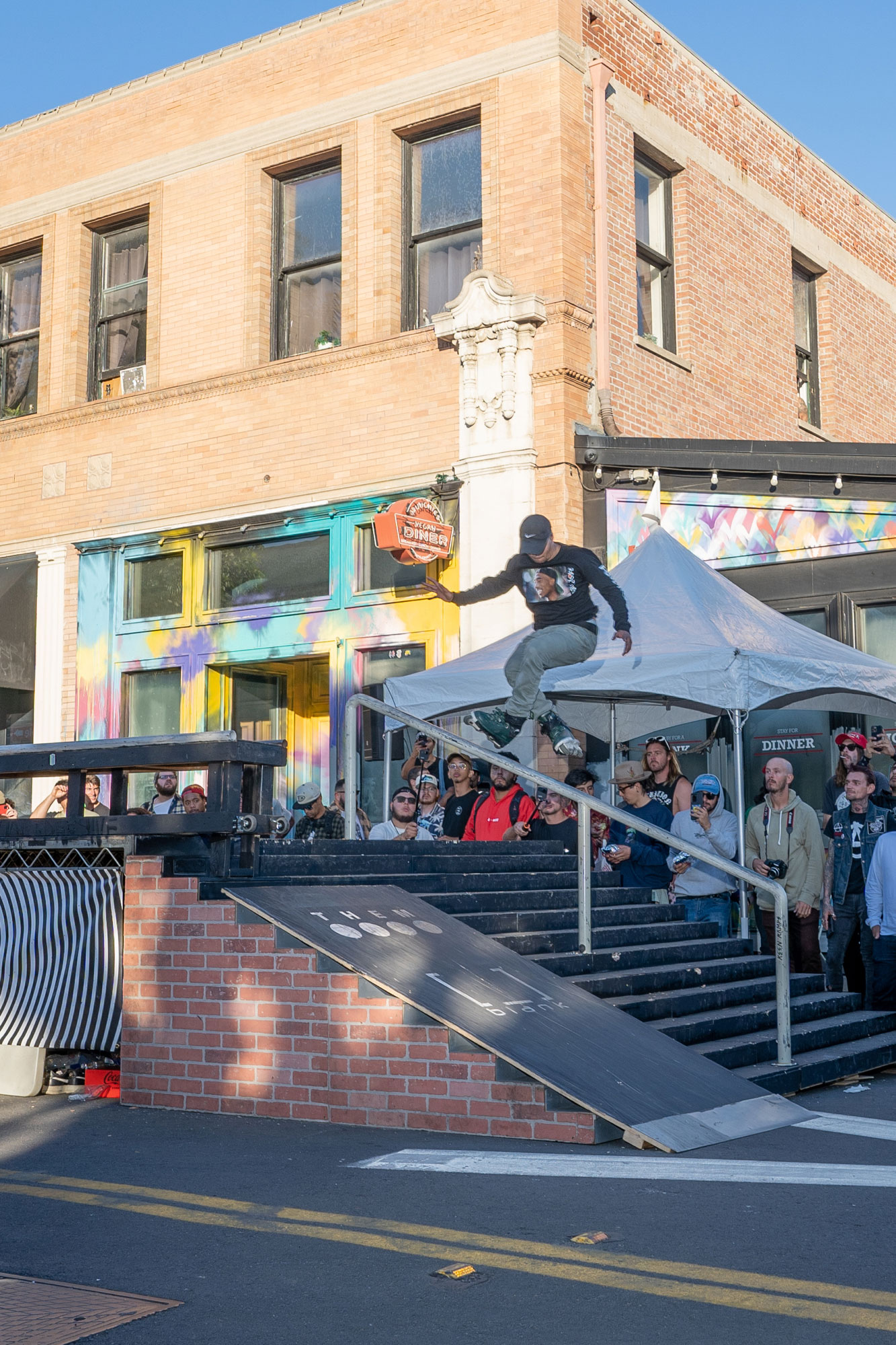 There’s always something technical about to go down with Korey takes the course and this rail-centric edition of Blading Cup was no different. He probably spun into this so just imagine it being even cooler than it looks here.

This bench was slick as ice and threw a curve ball to lots of skates but Marc Moreno hit it with confidence on a mach 5 back back. 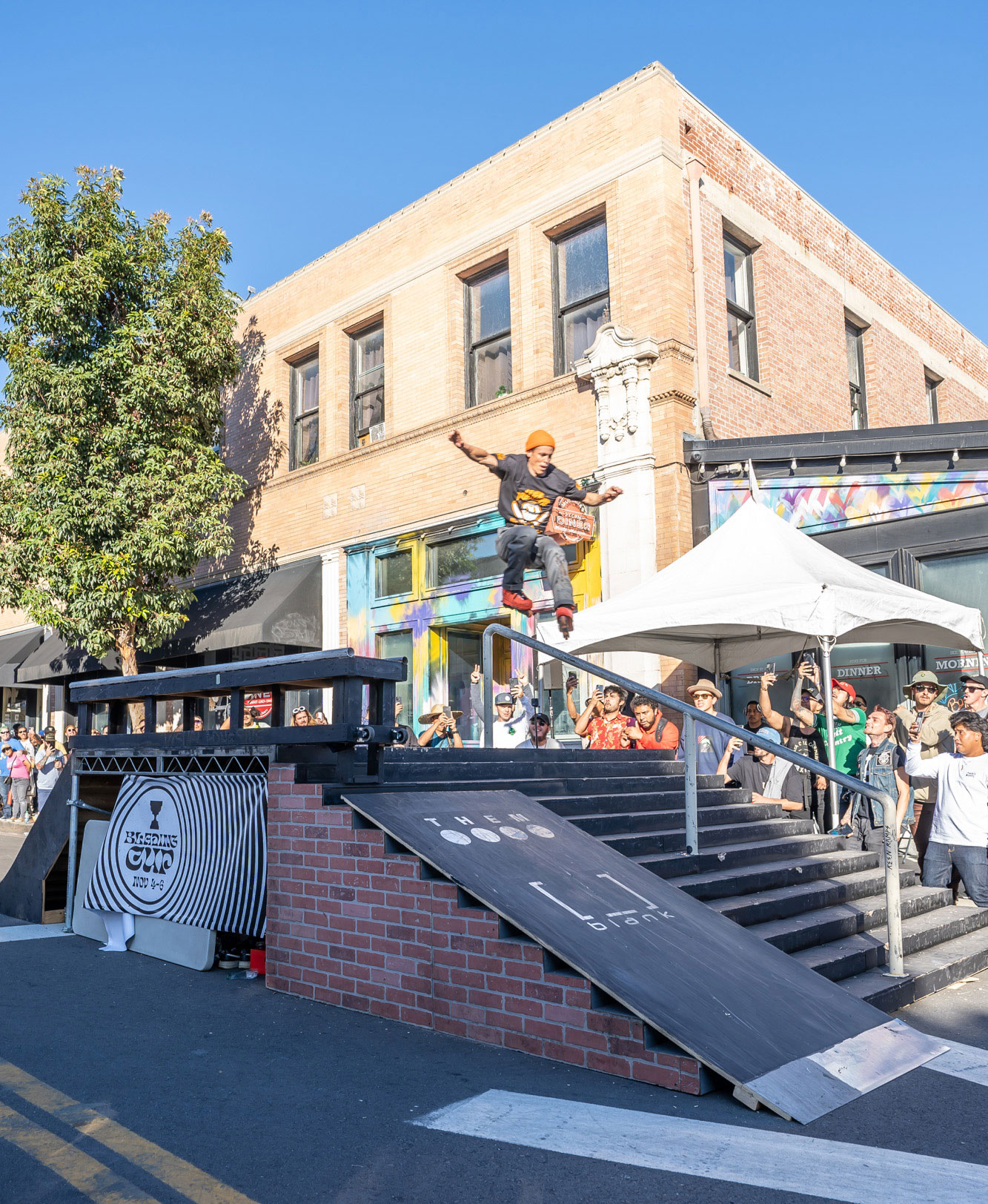 Undoubtedly one of the weekend’s highlights was Randy Spizer launching himself to disaster soul on the down rail amidst a flurry of other tricks, each one landed with a shit-eating grin on his face.

This is an image that doesn’t really need a caption as it’s become the idealized Top Acid stance thanks to the consistent and long running execution of Eric Schrijn, seen here demonstrating how it should be done.

Mike French ninja kicked his way through a demonstration on the bank to grind box before lacing this rock solid KG down the rail. For a guy that didn’t skate for years, this dude’s return is impressive.

NBD just Randy Spizer throwing a 540 that looks a lot like some kid from VG3 that did a few of these too. 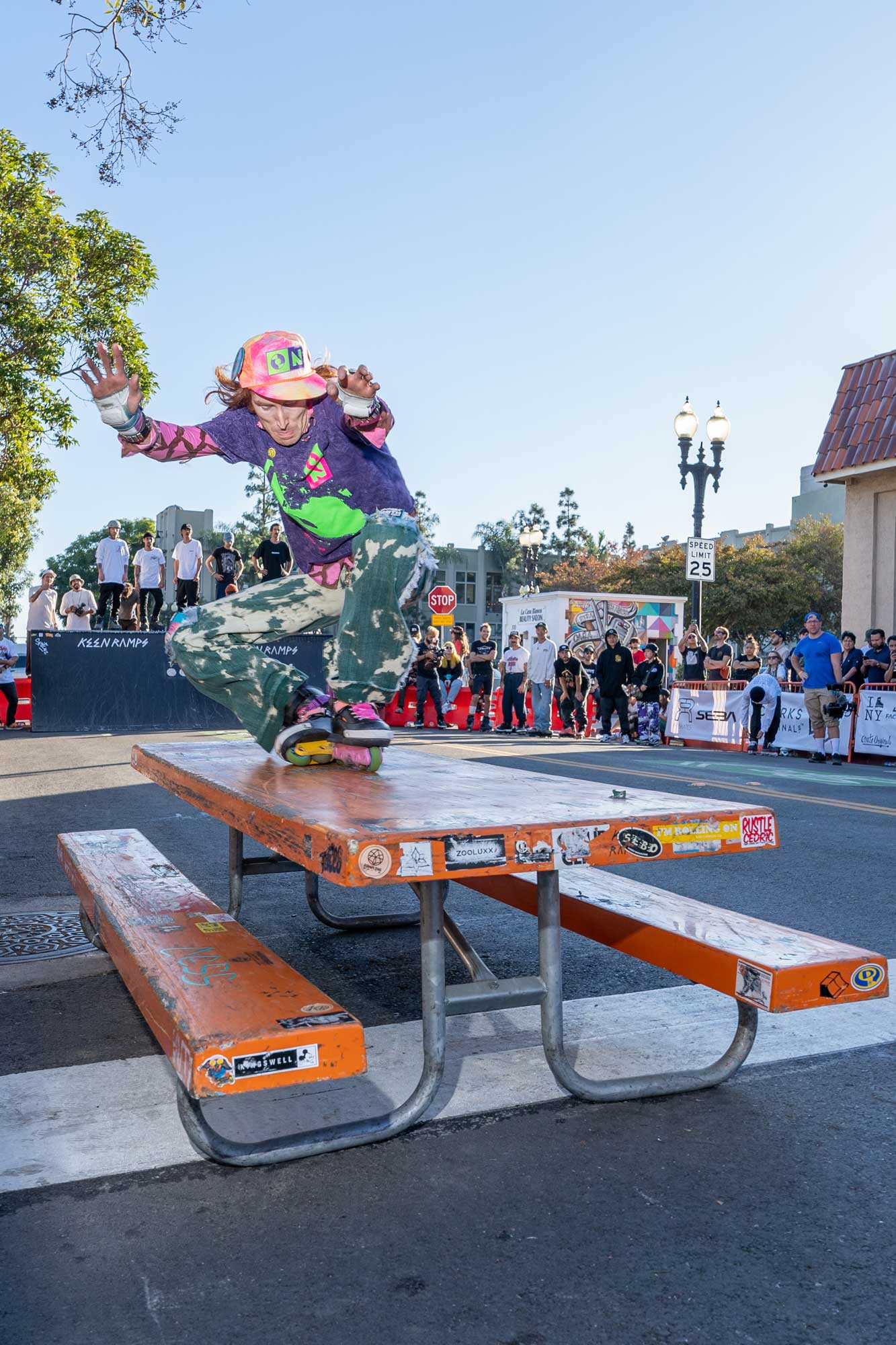 Forgoing the edge for a move down the middle, Robbie Pitts always brings a fresh perspective to whatever terrain he touches. 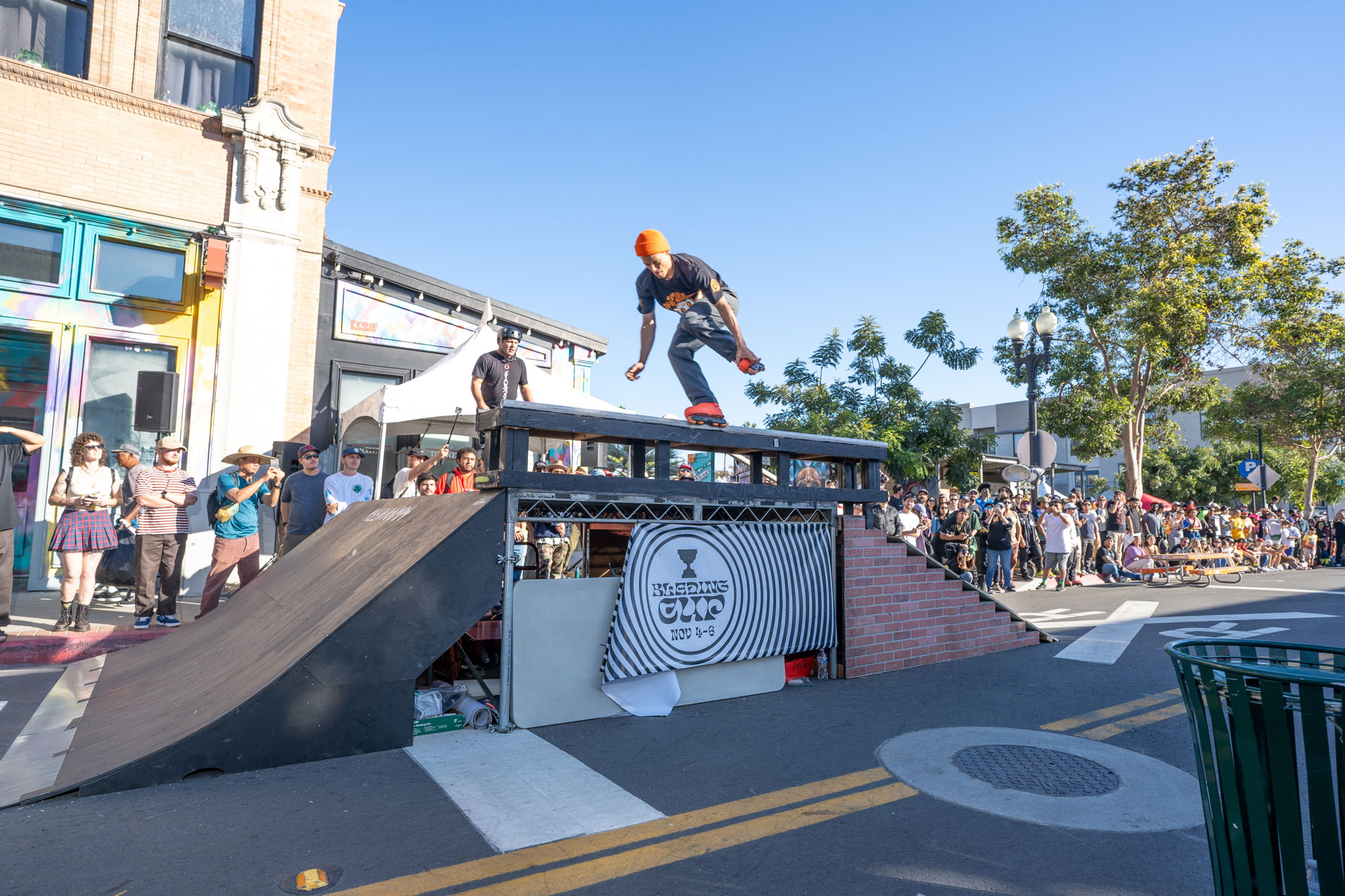 Another instance of Randy making something hard seem way too easy and showing that his dedication and regular sessions have kept his as sharp as anyone. 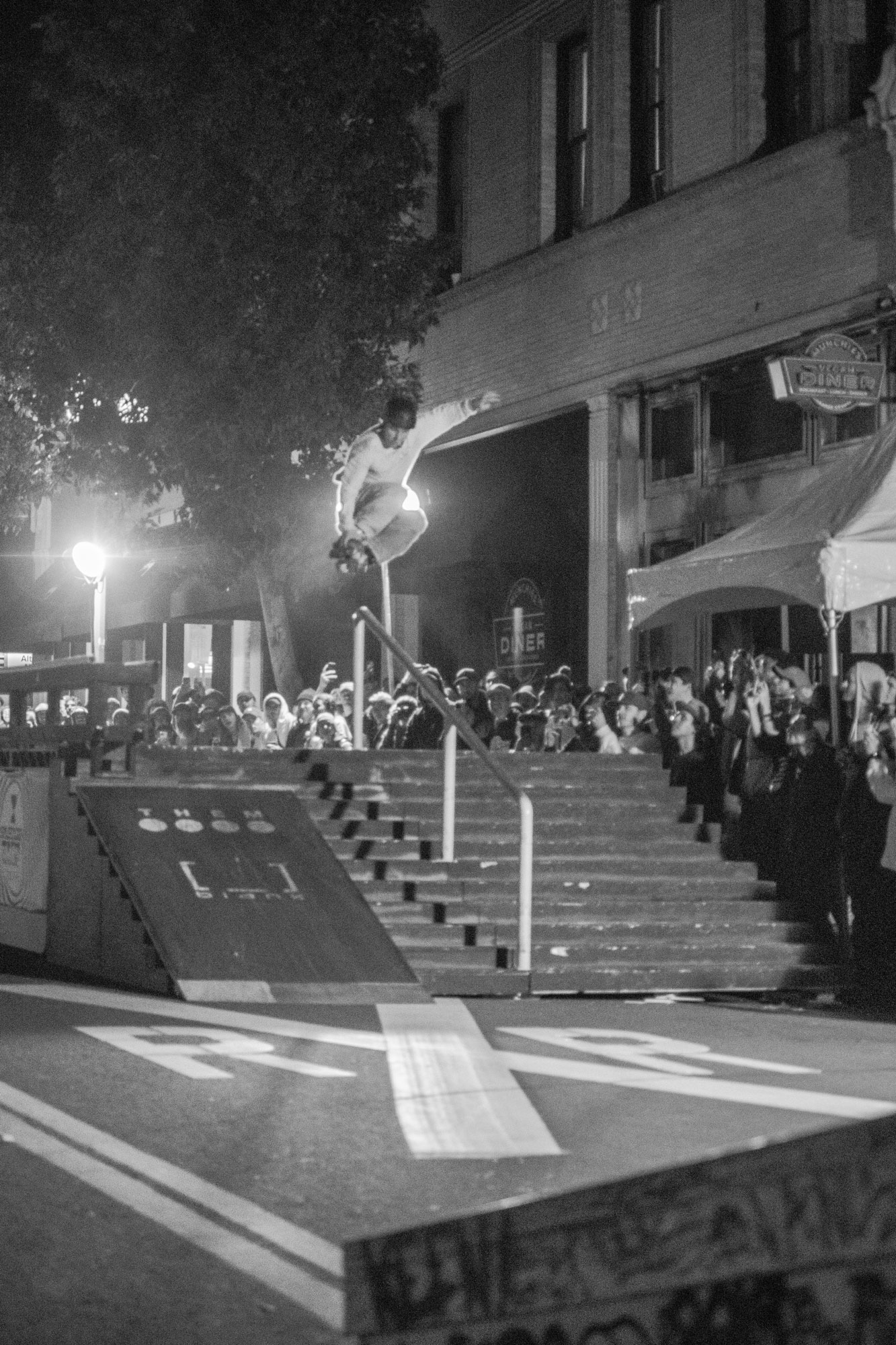 Having figured out the angles and his approach, Nils popped this gap to fish and got the crowd hyped. He was on a roll to the podium.

With a transfer that just seems impossible the more you think about it, Nils hucked from the grind box to the rail and caught the AO Top Acid just in time to lock and ride it out to the ground. Amazing! The crowd loved it and he cinched the win.