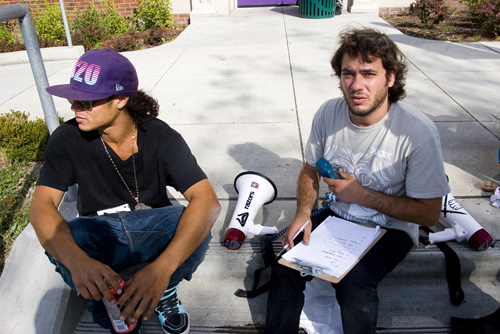 August 21, 2010, the northwest celebrated a milestone in Rollerblading. We celebrated the 10th and final year of the Street Battle Seattle contest. The only true “real-street” rollerblading contest in Seattle.

Ten years ago, Street Battle Seattle started off as a first of its kind. Rollerblading was still featured in the X-Games. The rolling industry as a whole was receiving a good amount of media attention. While most contests at the time were being held in skateparks, there were many that felt that the true essence of street skating was being missed. That essence being real obstacles, ledges, rails, gaps, etc… Obstacles, skate spots, found on the street. The true beauty of street skating being that you can strap on your boots and roll anywhere and find something to skate. Street skating is liberation from the confines of skate parks and purpose-built obstacles. Street Battle Seattle captured that essence, and it is one of the events that I’ve looked forward to, year after year…

For those not in the know, or that have never attended or participated in a street-oriented contest, spots are scouted and picked out several months before the event. The criteria the spots must meet before being selected vary in regards to difficulty or skate-ability of the obstacles. Other important criteria being accessibility and security. The skate-ability determines the level of competition of the event; not all spots can be 20′ drop rails. That would make for a interesting but rather short event. The spots need to be easy enough to find with simple driving directions, and secure enough that 100+ attendees don’t draw too much attention from the local law enforcement agencies. A lot of time goes into scouting primary and back-up locations.

Every year, the Street Battle has brought three or more unique and new skate spots to the Seattle scene. Seattle is the mecca of northwest rolling. What’s really made Street Battle Seattle possible is that you can have several spots with varying difficulty, variety, all within reasonable proximity to each other. Remz’s own pro rider Nick Wood asked me to quote him saying, “The Santee crew grew up skating Seattle. We (Santee crew) spent summers skating Seattle. I love this city, next to New York, it’s one of the top cities in the country for rollerblading.”

The final Street Battle Seattle brought out some of the best that rollerblading has seen. With a guaranteed grand prize of $1,000, skaters put forth their best for this year’s contest. Promotions for the event started early in the year. Familiar names attending the event this year included Dre Powell, Aaron Feinberg, Nick Wood, D.P. from Calgary, David Jones, Kawika Jarmin, Randy Juarez, Shane Lapointe, Josiah Blee, and Dustin Jameson.

The first spot chosen featured a pair of knee high ledges hidden in Seattle’s Eastlake neighborhood. A quiet neighborhood sandwiched between the freeway and the Eastern portion of Lake Union, a neighborhood known for quiet lake living and quaint little coffee shops and cafes. Not last weekend, as dozens of skaters and spectators poured into Seward School to skate the taps ledges. The size of the ledges made for low risk and difficulty. Those that scored well on this obstacle approached it with a lot of speed and showed the judges control by completing the grind through the entire ledge. Style won out at this spot.

A new addition to Street Battle Seattle was the bonus spot. Completion of the obstacle earned skaters a bonus cash prize and additional points toward the first round. The first location featured a flat-top rail down several steps of stairs to pole tap. There were few brave enough to attempt the bonus spot, but Shane Lapointe came through with a Backside Royale on the first rail to massive gap to Pole Tap 180.

For the bonus spot at Garfield, skaters had to leap over a small bench and into a steep bank. The total height of the obstacle was roughly 18′. No one else other than Seattle’s own Shane Lapointe attempted this feat. Shane landed a clean 180 into the bank collecting bonus points and extra cash.

The last location of the day featured a perfect-height 13-stair rail in the southern portion of the city. Skaters competed for their final points. The 13-stair was bordered with chest high flat rails that skaters could grind and drop from. Many amazing tricks went down at this location. Memorable highlights included Nick Wood’s steezy torques, and Dustin Jameson’s front farv to 180 Lui Kang drop.

There was truly great skating throughout the day. Those that attended the event will undeniably say that Street Battle Seattle 10 was the Shane Lapointe show. Rightfully so, Shane claimed the title as the final Street Battle Seattle champion. A great time was had by all, and in typical Jeremy Townsend fashion an afterparty was thrown at a swanky Seattle Nightclub to end the event.

Special thanks goes out to everyone that has ever supported Street Battle Seattle. This year’s sponsors include Razors, Remedys, First and Lexington, the FP lab, and the WRS.

The only one of its kind in the Seattle area, many will miss the Street Battle Seattle series. It’s been a critical piece of Seattle Rolling. Big up’s to my boy Jeremy Townsend for holding Seattle down for the last 10 years. — Erik Allas

Man that guy Erik is a sex machine. Shain is master shredder!