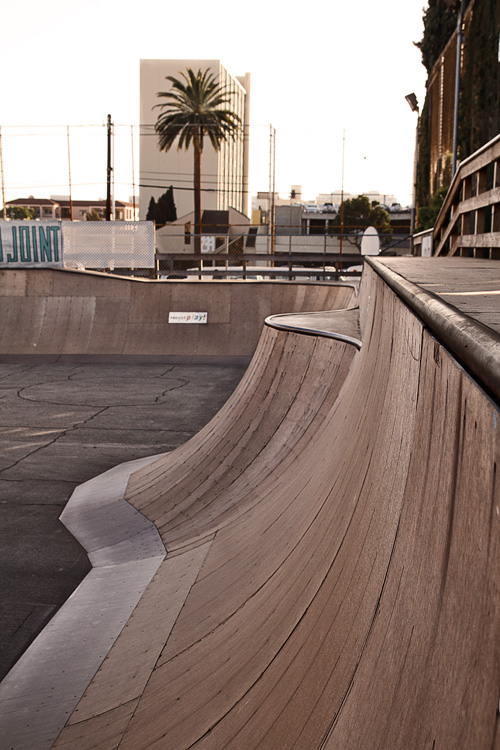 EVENTS: The Legacy of LA All Day

Here’s a sight you won’t see in Santa Monica anymore.

In the time following the end of NISS and the X-Games, and eventually the ASA comps, the stick-to-your-guns-community otherwise known as the rollerblading industry have clung to and celebrated a number of grassroots contests. IMYTA, BCSD, Winterclash, Superhick, Barn Burner, Hoedown—these are some of the bigger ones, some that have stood the test of time in this volatile industry. There’s the Pan Handle Pow Wow, Last Man Standing, The Windy City Riot, The Chaz Sands Invitational, The Seattle Street Battle. I could go on and on about all of these contests, most of which have become events in themselves, traditions in our humble little underground. Some are held in skateparks with hundreds of people on the course and others take place a little closer to the core of rollerblading, on street spots in cities all over the world. However different each contest is, the one similarity that binds them all together as a staple of blade culture is that each one was created by a small group of passionate people, a devoted corps of individuals hoping to give back to the community that brought them up. From 2005 until September of last year former pros and pioneers of blading, Tracy White and Carlos Kessell, brought that passion to the Santa Monica Boys and Girls Club with the LA All Day contest series.

In an interview I once did with Tracy, when I asked about why he and Carlos started LA All Day, amongst other things, he responded with, “I want to give back to rollerblading so it can change other kids’ lives, and people all over the world can become Blade Heads too.” LA All Day gave kids of all ages and skaters of all skill levels a chance to compete. A beginning dude wouldn’t have to feel nervous because he’d be competing against kids his own age, kids he probably skated with at the park every day. It gave them a chance to interact with some of their favorite pros. Believe it or not, circa 2011, these ideals are not always universally practiced. But for Tracy, who followed his kaleidoscope-California dream of leaving the Midwest and becoming a pro skater back when you still had to explain to people what rollerblades were, it was an identifiable goal. A goal he and Carlos took to achieving with good vibes and good intentions, packaged into a family-friendly but blader-inclusive event series, that just happened to have a home right in the middle of Santa Monica.

Shutdown was accelerated to prevent the last event from taking place.

September 11th was the scheduled date for the final LA All Day contest of the 2010 series. Sadly, Tracy and Carlos were informed on September 7th that the park was being demolished to make room for new basketball courts. Despite pleas from parents and participants, by September 9th all of the ramps were either removed or destroyed. The contest relocated to the SPA mini-ramp in Venice a week later, but it was obvious that the younger local kids were pretty bummed out. For these young shredders, their first memories on blades were at the Santa Monica Park. Their first skate contest, LA All Day.

You see a skateboarder. We see a future Blade Head.

The legacy of LA All Day, and all programs that reach out to the community and invite kids off of the street to try blading in hopes that it will do for them what it did for us, will be carried on. Who knows, maybe by this time next year I’ll be writing an article about a great new initiative that stepped into LA All Day’s shoes and filled the void? Let’s hope. As rollerbladers, we have seen our fair share of companies, contests and personalities come and go, year after year, hoping for something better, or at least something different. But life goes on. The longer you sit around waiting for something to happen, the longer it’s going to take. People like Tracy and Carlos don’t have deep pockets and big sponsors, but the passion they have for rollerblading and the positive outlook it’s given them on life allowed them to dream and deliver the LA All Day. They changed the blading landscape of LA, bringing skaters from all the different scenes together, and instilled a certain sort of positive spirit into the lives of those around them. Anyone who has met these guys knows exactly what I’m talking about. — Ben Karris

(Ed’s Note: Now residing in Rockford, IL, Tracy tells us he’s in the early stages of developing a new blade program for a local communicaty center. The Blade Heads live on.)

Wanna see a ton of LA All Day (and other event) coverage? Check this!

Nice Ben, thanks for always coming down to L.A. and supporting the cause. BLADEHEAD!

what the hell?? skate parks closing down everywhere

great article, there is hope for the future kids. research of the past will tell you that, most skate centers of all types say, that every seven years, there is a new cycle that comes around, in my thought process, that means something will be happening in 2012!!!

My son, who bladed at SMBGC, will remember Tracy and LA All Day for the rest of his life. It was by far the most fun he has ever had. Thanks for the article and I hope all is well for Tracy in Rockford.

PS – anybody want to go shoot some hoops 🙁

good luck in in rockford stacy!

Honestly…how many basketball courts are there in the Santa Monica area? That is the lamest excuse to tear down a park I have ever heard. Tracy is one of the most inspiring individuals I have EVER met.His heart is 120% dedicated to rollerblading,I feel like they will find a way to continue on with the LA All Day legacy in some way.

Man i am going to miss blasting out of my favorite quarterpipe there, people would tell me all the time that i got stupid high out of if. R.I.P

It sucks to not a club kid any more