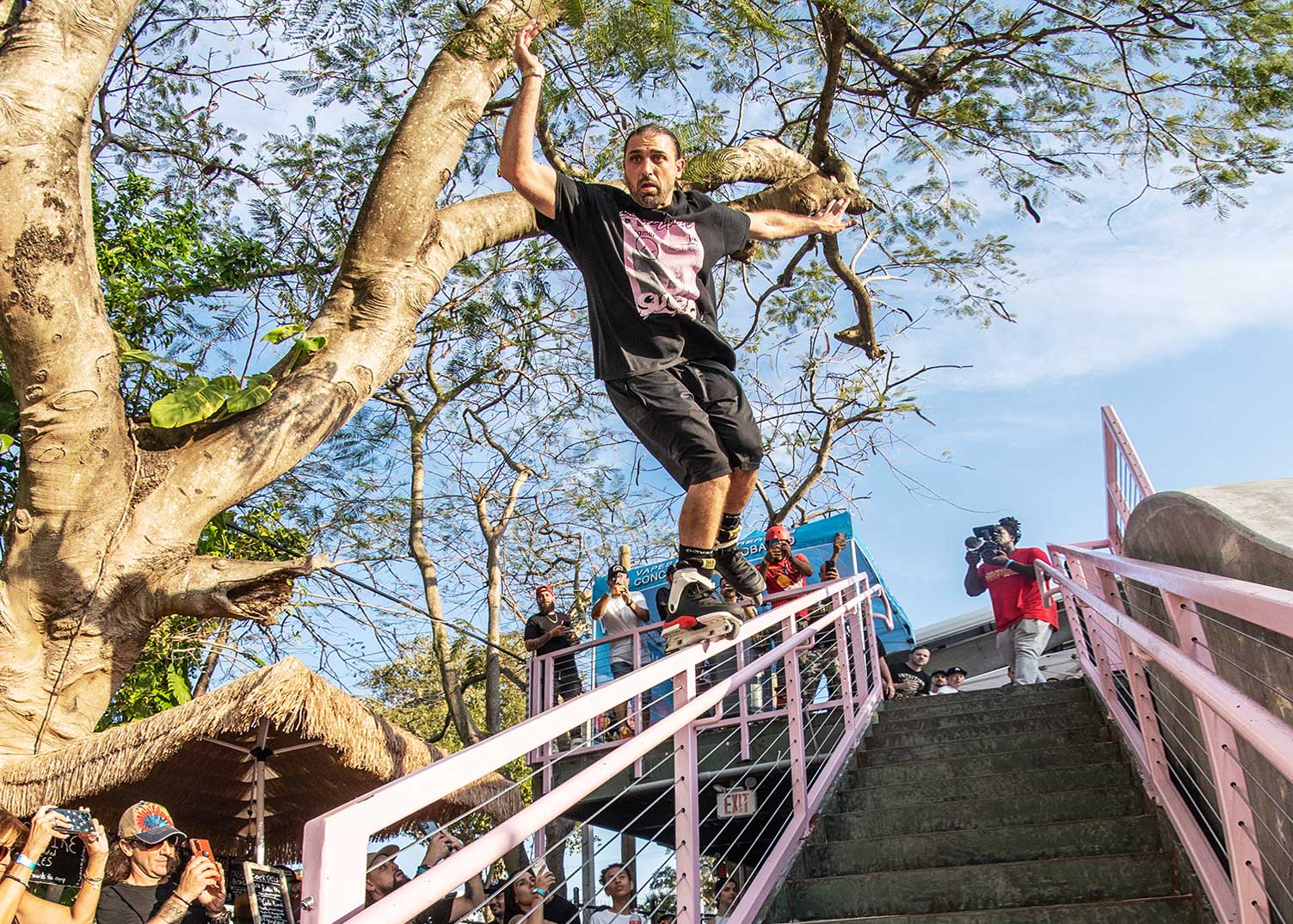 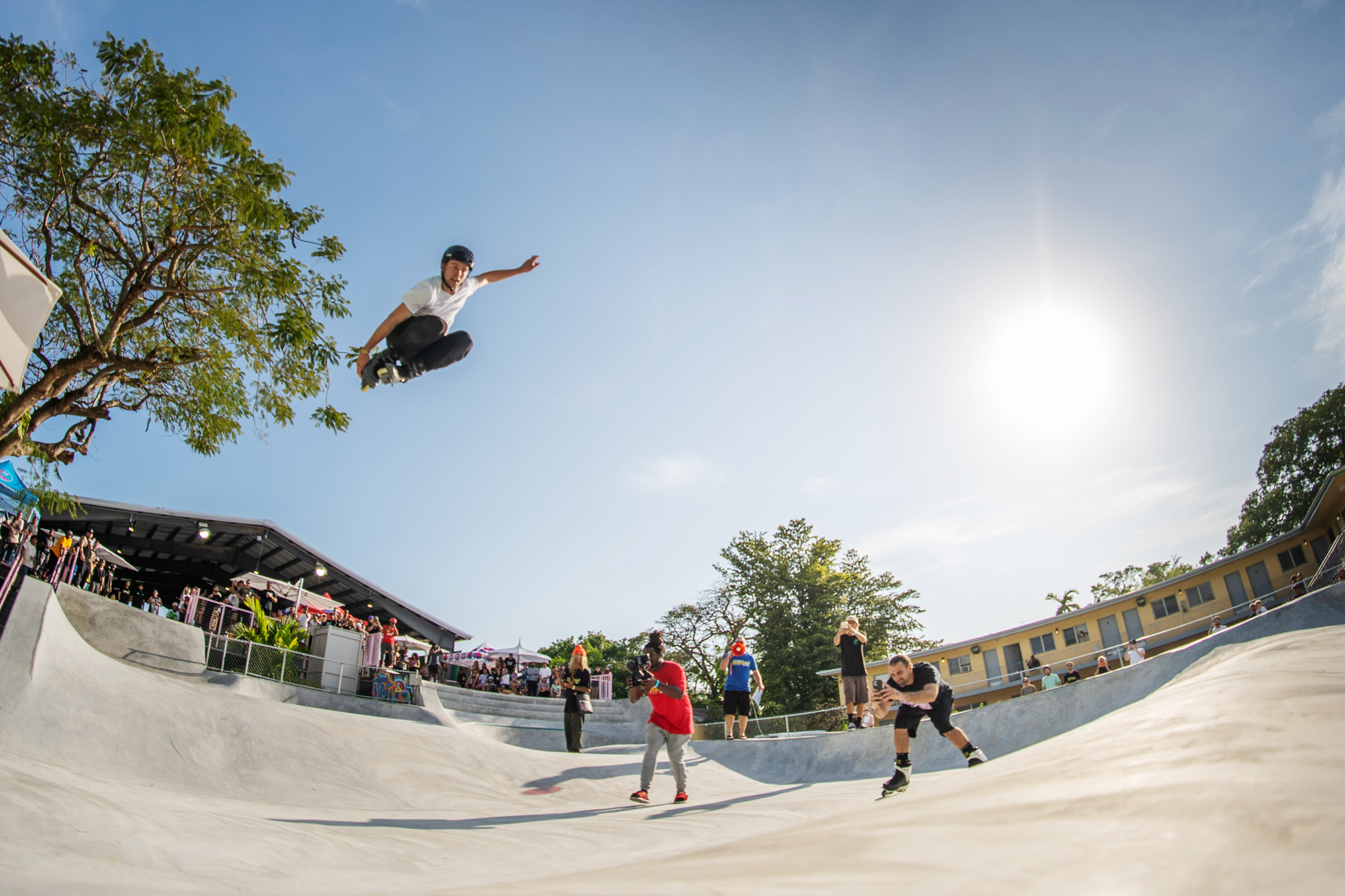 On April 2nd, bladers from all over converged on Miami, Florida to support Franky Morales and his second-ever Franky Morales Invitational event. With the first event taking place just five months ago in November 2021, Franky is wasting no time making his mark on the US competition scene. And fortunately for us and all of you, among those in attendance was Steve Steinmetz, who’d jumped on a flight out of San Diego with the Red Eye Wheels crew and put together this whopper of an event report. Now strap in to relive standout moments from Demetrios George, Wake Schepman, Diako Diaby, Korey Waikiki and more, then make plans to get to Miami for the next FMI, which we’re sure will be announced soon!

Blading got another chance to shine in Miami, Florida, with the 2nd Franky Morales Invitational. The event took place during spring break for most people, and unfortunately, there were massive flight cancellations for travelers across the country/world resulting in a few confirmed riders missing the event. Nevertheless, fans/friends/sponsors and skaters alike went all-in to support Franky’s vision. 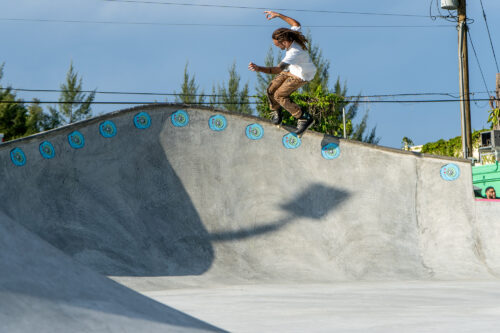 The venue that hosted the contest, SkateBird, is a brand new indoor/outdoor private skatepark with various obstacles for both street and transition skaters. This park venue has its very own shop called #Miami_OnWheels. Where they sell all a blader or rollerskater would need for a great session. There were other amenities at the venue, like a barbershop, tattoo shop, and an outdoor bar run by SkateBird. They even had their own delicious gourmet pizza. Nestled in the El Portal neighborhood of Miami, I imagine it was a completely different vibe than the previous location of Lot 11 which is a large public park with very few close amenities. 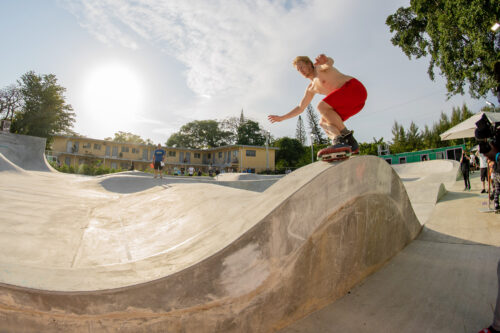 It should come as no surprise that a legend in both street and park chose a location and a competition style that enticed both street skaters and park/transition skaters. After all, if we were to look at Franky’s distinguished blading career, he proved himself undoubtedly in both street and park, winning countless competitions at the highest level against the best in the world multiple years in a row. Along with competition victories he also had phenomenal skate video sections featuring his distinctive southern style that showed the world he is undoubtedly one of the greatest of all time.

The competition opened with the women’s open event, where competitors displayed style and endurance. The skaters put their bodies and stamina on the line throwing down creative transfers, coping grinds, and plenty of spins on all of the obstacles in the park. It was great to see some new faces and local talents like Sammy Riesco, who went head to head with more established professional riders like Chynna Weierstall and Daniela Salgado. Unfortunately, Chynna sustained a shin injury during her run and was forced to head to the hospital for stitches, so it was decided that the women’s final would not take place. Instead, the top three bladers were offered a spot to compete in the men’s division of the semi-finals, but only Daniela Salgado took them up on that offer. Regardless of the circumstances, the skaters were impressive and set the stage for the rest of the competition. 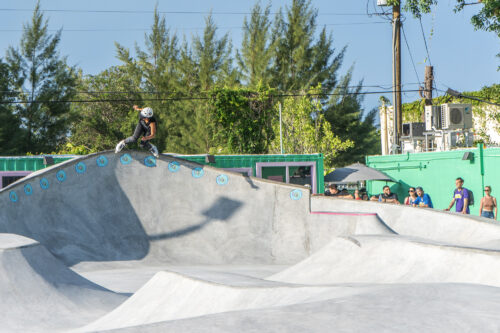 The men’s open started with some impressive tricks from Florida’s top athletes and unique acrobatic tricks from Diako Diaby, Jesus Rivera Rivera, and Baxter Edwards. Diako not only soared with the highest transfers and airs, but also showed the crowd and his fellow competitors he had some technical grinds and lines to set the bar for everyone. 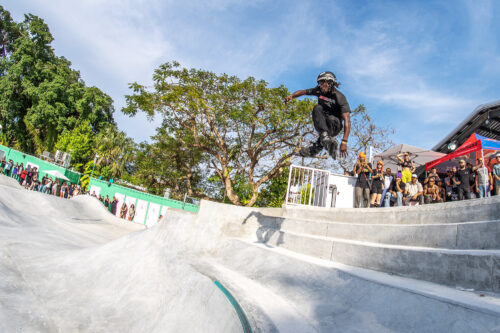 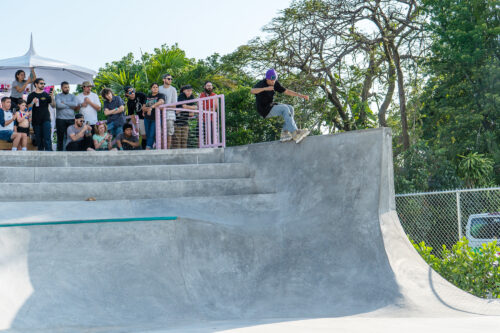 Skaters had to push themselves in order to keep up with Diako’s trick vocabulary that included huge abstract spin quarter to quarter transfers and various grind combinations. The field was biting at his heels with their unique approach to the course to make the Semifinals. Standouts during the prelims were Jon Fromm, Korey Waikiki, Joey Chase, Demetrious George, Zach Pollock, and Wake Schepman because of their clean lines and their variety of tricks. 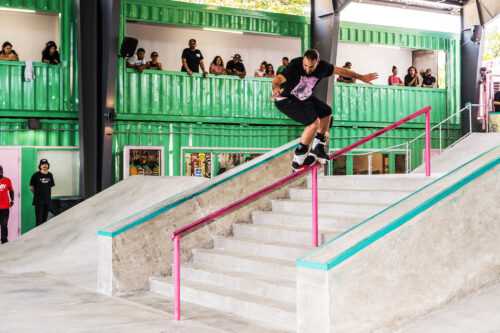 Some less conventional tricks also caught the eye of the audience and judges like Yasmany CM’s acid drop transfer from the 2nd story of the building directly onto the street course. After a fierce battle in the skate plaza-like arena, the crowd was ready to see who advanced to the next round. Out of the fifty-five competitors, the judges narrowed the field to twenty.

The semi-finals allowed each competitor to use the entire outside course. The main obstacles included a ruthlessly high clamshell-shaped bowl with pool coping and a giant snake run with large bumps. The semi-finalists used this area to huck hammers or to go technical. Instead of a Jam session, the announcer, Chris Edwards, let each competitor have one attempt, and then it was on to the next.

The pressure was on as each person decided what they needed to do to advance to the finals. The athletes did not disappoint, and many Florida bladers came through to set the vibe. They were ready to bleed for their hometown, push themselves through to the finals, and compete at the highest level. Joey Chase chose a less conventional approach to the course by showing his purest form of street stunts with a back farv to fakie on a 12-stair square drop rail, only to be matched by Demetrios with a text-book back fastslide on the same rail. 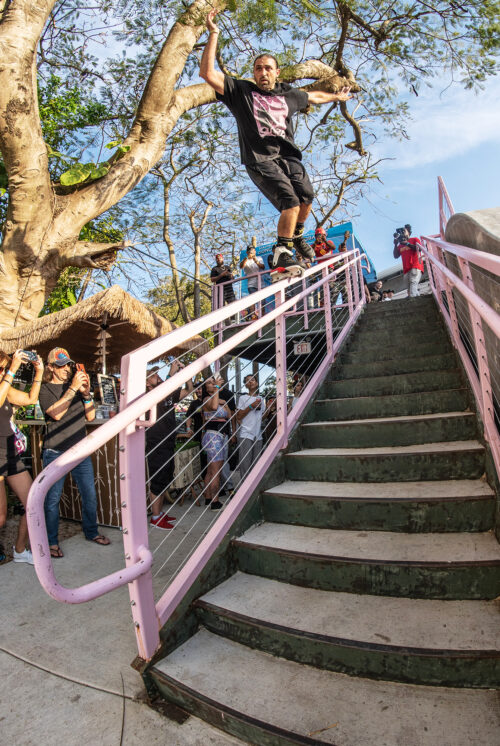 The crowd was out of control with enthusiasm as competitors flew through the air, grinding, spinning, and flipping into the top spots. Korey Waikiki performed huge gaps and effortless grinds on the pool coping that would make all his boys back home “juiced like a foo!” Diako did abstract spins into the sidewall transition and a massive corkscrew 900 on the enormous bump-to-bump transfer in the snake run. Then, to make things interesting, Wake Schepman soared further than thirty feet with a safety grab, and the crowd, again, went crazy. Trick after trick, the crowd’s excitement grew louder as hammers were laced and the top twenty cut down to the top ten. 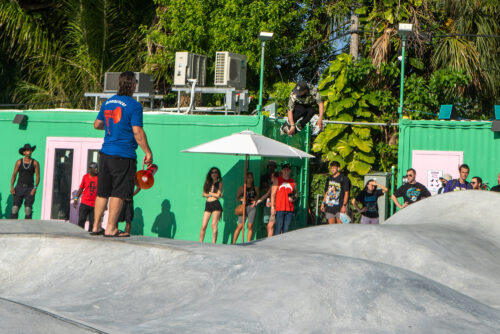 During the semi-finals the competitors gave it their all, but making the finals meant another set of runs on the course where they had started the day. So what else would the crew add to make this part of the competition exciting and to keep the energy going? First, Franky’s crew added a 12-foot PVC box to the top of the deck that created a rail transfer element.

Then, instead of continuing with the same format as the outside semi-finals, these final ten competitors battled in more of a jam session environment where everyone in the finals competed for ten minutes all at once. However, after Diako Diaby landed his corkscrew 1080 on the quarter pipe transfer, the competition turned into the best trick contest, which ultimately left some competitors choosing to follow his lead and lace their heaviest hammer of the nigh, hoping to please the crowd and impress the judges.This competition-style was advantageous for crowd-pleasing, but the outcome may have been different if the prominent judges had specific criteria for judging, such as judging the contest on tricks landed, line, style, and creativity. Regardless of the judging style, everyone in the finals was showing huge heart and love for blading.

FMI2 was a great show of athleticism and ability to perform under challenging conditions with the pressure and heat of their skills on the line. Everyone risked it all, but only one person would take home the prize money. Everyone else went home with crisp high fives, handshakes, sore ass bodies and exhaustion after pushing themselves to their physical and mental limit. 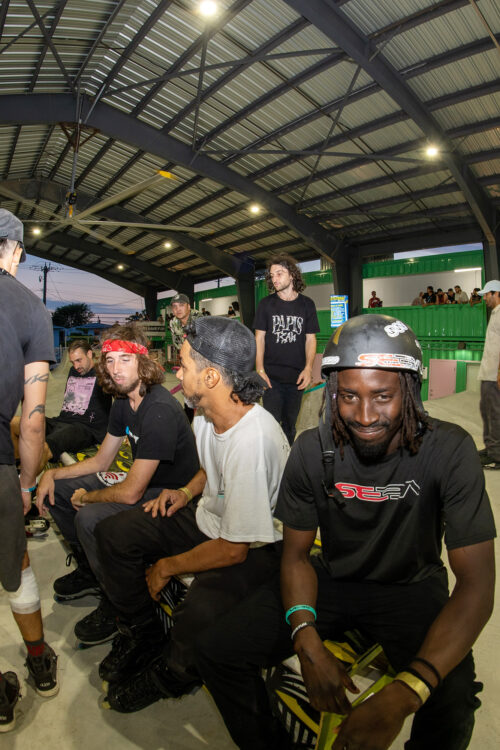 Although this is only Franky’s 2nd invitational, he is doing a great thing for the blading community by bringing a huge group of us together to learn from each other’s styles, gain friends, and ultimately continue the love for the competitive side of our sport. I look forward to the next invitational where I hope to see even more talent come to the table and enjoy the amazing weather and vibes of Miami! Hope to see you there! — Steve Steinmetz

Photos and Words by Steve Steinmetz