We arrived at Woodland park in Lexington, KY about 2:45PM, the previously agreed upon start time. Knowing full well that the Battle has literally NEVER started on time, we weren’t in too much of a hurry. We could see some of the heads from the parking lot, but couldn’t miss the Anthony boys and the Southern Scum van. They had a booth set up and were selling their one-of-a-kind items — reaching out to the younger generation. With Mr. Matthews painting signage, old school guys shaking hands and bullshitting about past Battles, some of the young bucks tore through the park, particularly Scott Hatton.

I’ve been to Woodland skatepark off and on for over a decade and have never seen anyone utilize it as creatively and smoothly as he did. Lofty spins over the hips and boxes, and controlled, technical lines that spanned the entire area of the park, forcing everyone else to stop and watch the show. He had company though, Jake Conkwright and Tri-Tri Rudolph were holding it down for the old school with Jake launching out of the mini ramp to soul on the down ledge and Tri amazing all in attendance with a variety of negative variations. Murphy was throwing misty flips out of the transitions, and Ryan Habeeb even overcame a serious knock to the head when he landed a disaster truespin mizou into the mini-ramp. There were many cities and crews represented as everyone slowly filled the park.

Rollerbladers from Nashville, Florida, Lexington, Carolina, Atlanta, Louisville, and Ohio all seemed hyped and ready for Battle. But where was Doug?

With our fearless leader still absent, Southern Scum declared that for the next five minutes the person who did the best trick on the low grind box that rests in the center of the park would gain free entry to the Battle. Multiple people started hitting the box, but were severely overshadowed by Aaron Pyle. Outspin frontside royale to dark alley-oop makio rewind was just one of the extremely tech tricks he landed, prompting everyone else to just give up. It was around this time that Dougish Ruggish finally arrived to pass out driver directions, and get the show on the road. 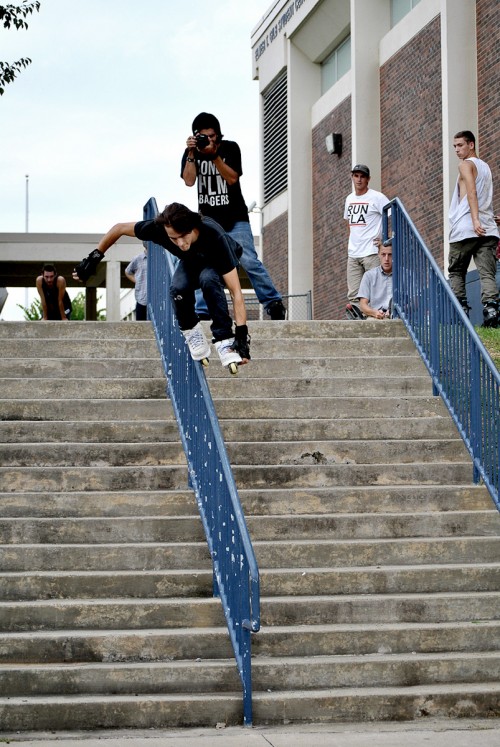 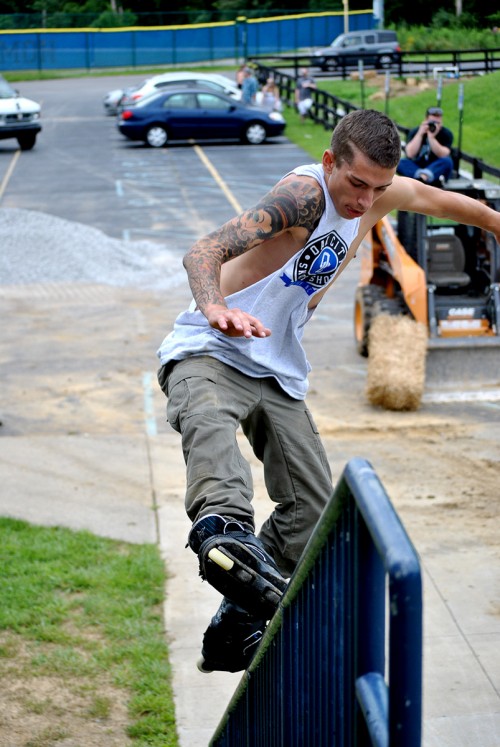 The first spot was the infamous Henry Clay rails that have been a mainstay in the Kentucky Battle series for years. We arrived early to find people already going off, even though half the people in attendance had not arrived at the spot. Mike Fontenelle from Florida was doing outspin kind grinds, while Anthony Armstrong landed backside savannah as well as true spin 360 topside pornstar and true spin 360 pornstar. When asked which one was switch he said, “I don’t have one.” Kyle Mackenzie landed 270 bs royale 270 out, and 360 topsoul, both on the first attempt which prompted some of the other competitors to say, “Can we warm up first?” Chris Smith was landing solid, smooth grinds and easily had the best style amongst the competitors. However, John Cooley was murdering. Inspin 270 bs savannah, inspin 360 top soyale, 450 fs royale, and a huge mute 540 which the spectators went nuts for. He even fakie 720’d the gap, and would have landed it if Tim Schmidt’s dog (who freaked out and ran into the woods directly afterwards) hadn’t been in his landing spot. Scott Hatton was doing steezy inspin frontside grinds, and landed liu kang 180 and a legit as fuck safety 540. The biggest surprise to me was Julian Mire who I had previously never heard of. This kid was very consistent, and surprised me with how solid his tricks looked. He threw down topside acid, fishbrain, and truespin mizou among other tricks and while not the most technical, is definitely someone to watch for in the future. Everyone was vibing off of each other until the cops showed up (hide your bottles), and forced everyone to leave. 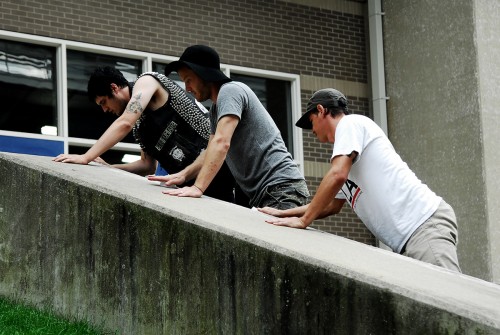 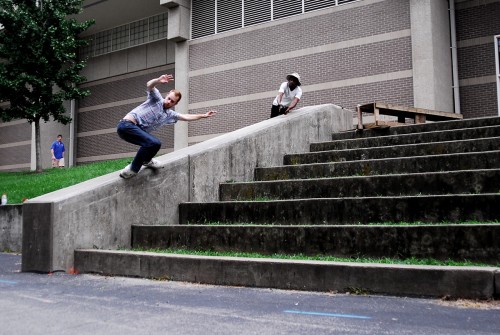 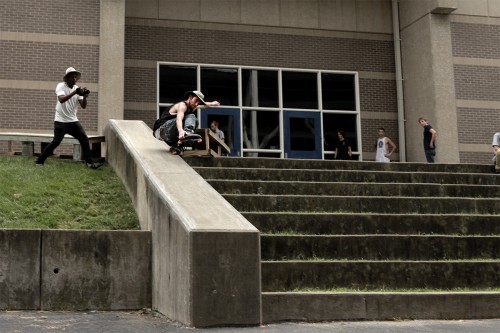 The second spot was a sloping down ledge at LCC with a disaster approach, and grass on one side. However, Mr. Hatton pulled up with two coping boxes in his truck bed and it was decided they would be placed on either side of the ledge for transfers. Anthony Armstrong didn’t seem to need the boxes, landing both disaster backside and torque. Did I mention someone brought a boom box and was playing old school Tupac and Biggie at this spot? Chris Smith was going off, landing both a top torque soul and true top soul, which (after several attempts) was landed perfectly. Kyle Mackenzie seemed determined, landing backside unity among other tricks, but took several hard falls. Mike Fontenelle landed top acid to kindgrind transfer from box to ledge, as well as disaster backside while Tim Schmidt landed both disaster soul, and soul to soul transfer on the opposite side of the ledge. Julian Mire landed bs royale and I believe he top souled it, while Tri-Tri Rudolf landed a variety of cess combinations down the center of the ledge, including a pud slide that left everyone wondering if he had knees. At some point we noticed campus security show up — and thought we were busted — but they just wanted to take a few pictures from a distance apparently because they left us alone. Thank you, Instagram. Scott Hatton landed soul to soul transfer and soul transfer true top soyale on a ghetto box set-up down the grass hill, but got wrecked on his third attempt to transfer from the box to fakie one-footed roll down the ledge. Jon Cooley landed a soul to 450 bs royale transfer, and a disaster fishbrain revert that was fucking amazing. 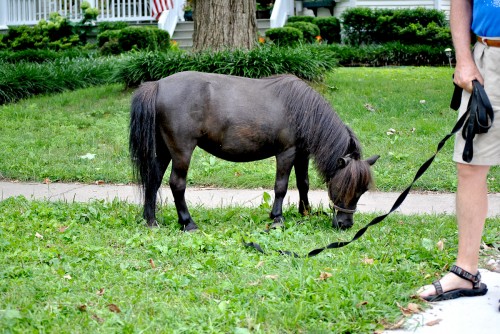 Pet horse. So what. 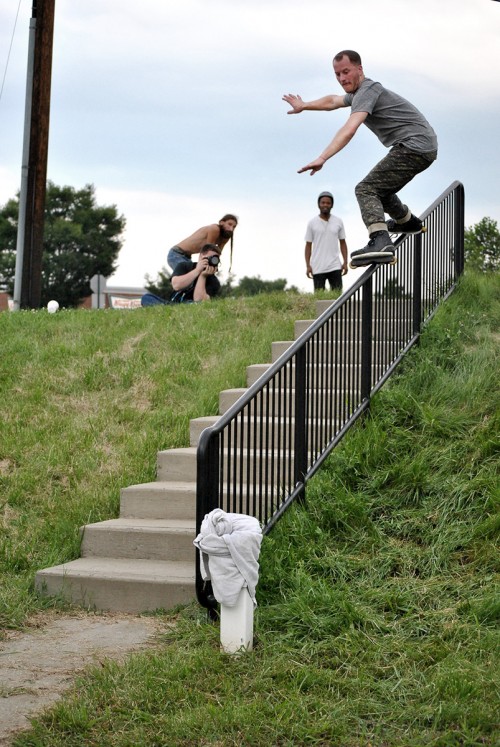 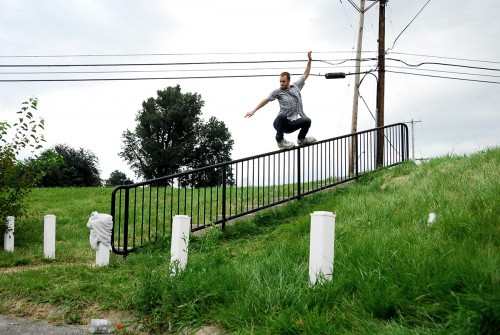 After we acquired beverages at the local gas station, it was off to the third spot, a gently slanting rail on the left side with absolute death at the end. Two plastic pillars (one on each side) had been concreted into the ground beside the end of the rail, a sure sign of carnage to the unlucky soul who came off early. Doug and Aaron Pyle were trying to kick the pillar loose to remove it, but only broke the top off of the pillar, exposing the jagged plastic and making it worse. It was decided that we would wrap a towel around it and session the spot anyway. Julian Mire continued his consistency with several topside variations, while Anthony Armstrong landed alley oop top acid among other tricks. Tim Schmidt was putting on a clinic with textbook soul tricks, including a sweatstance and x grind. Jon Cooley landed a nice soyale, but was overshadowed by Chris Smith who landed alley oop topside soyale to outspin fs farv, as well as true spin 270 fs farv. Brad (formerly baggy Brad, as opposed to tight Chad) Anthony even put his feet on and landed a grabbed rocket fishbrain that surely pleased all of the ladies in attendance. As we were leaving to go to the next spot, we were stopped by a man in a truck. He knew nothing about Rollerblading, but was impressed and just had to stop and find out what was going on. 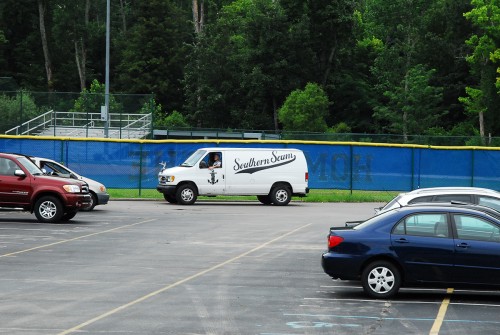 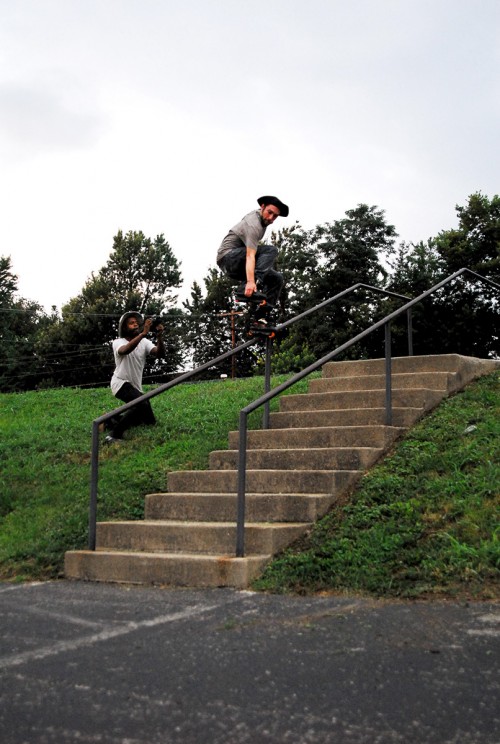 Upon arrival at the fourth spot, everyone was scoping the Brain Fear Gone-Dustin Latimer-looking roof and was hoping that wasn’t the main obstacle. To everyone’s delight, there was a lot more in the back of the church. A flat to down stair rail on both sides, with a large grass gap and a concrete bank off to the side. Everyone was chilling and smoking while Chris Smith and Julian Mire set up a small board off of the curb before the rail to create a launch. Before they could even hit that, John Ritter earned a new DVD by landing a nice unity to topsoul down the left side. Chris and Julian both landed disaster topsoul off of the launch, but just like the second spot, Anthony Armstrong didn’t need it. He landed disaster bs royale, disaster topsoul, and disaster bs torque over the gap to the right slant almost killing a spectator as he sped away after landing. Luckily he jumped over him, sparing his life. Cooley had no fear of death, landing disaster fs backslide over the left slant, topsoul the left flat to royale transfer the right slant, and a massive 540 over the grass gap. Taylor Popham even put down his beer to gap into the bank with a nice stale grab, while Tri, Pyle, and Matt Foley were getting their mushroom blade on grinding the curb that ran across the top of the bank. Scott Hatton, who was still hurt from his fall at the last spot, was overheard saying “Who let Doug drive their car?” Just then I turned to see Jon Cooley getting towed towards the bank at a high rate of speed. Did he misty flip it? Yes. Twice? Yes. Switch and natural? Yes. It was around this time that we noticed a disgruntled church employee on the phone through the glass door. Her body language was frantic, so we assumed she was on the phone with the police and left before it got too hot.

The last spot was a set of rails on campus that have been in several videos, and has been graced by big names like Jordan Dale and Omar Wysong. The left side has a terrifying drop, and the right side has a flat rail that leads up to it. Right away Cooley and Armstrong were vibing off of each other and getting juiced. They both landed bs savannah, and Cooley both true top soyaled it and liu kang 180’d the stairs. Chris Smith frontside royaled the right side, and landed a super smooth top torque soul across the right flat and down the slant. At this point, it was getting pretty dark and the session was dying down. People were chilling in the grass beside the landing and discussing the after party situation. Out of nowhere, Anthony Armstrong came flying down the runway top torque souled the right flat and gapped off and over the stairs! It was ridiculous. Nobody had ever done that before, and the crowd went fucking crazy. Unfortunately, he severely injured his foot on the attempt and had to be escorted back to the car. 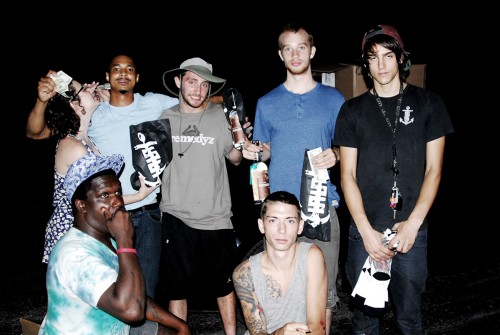 Overall, this years Battle was successful. Good times were had by all in attendance, and faith was restored. Just as it was captioned by DB in a photo (Hellbellies) of a pro tour stop in 1999, ROLLERBLADING is alive and well in America. — Dustin Black 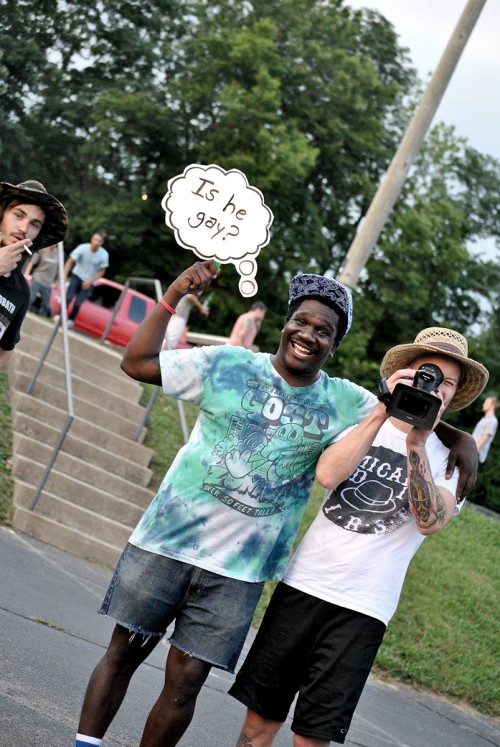 I just want to say this year was pretty wild, everyone that came out got to have a blast. I, for one, am all for the KY Battle. It’s just a bunch of good friends coming together to have fun blading and going hard to take the title, which over the years has just been a namesake in itself. Everyone of the KY Battle champions fought fucking hard ’til the end. It’s just so cool to be able to experience through all the stress and chaos, no one gets to see in the background. I wouldn’t have it any other way though, no regrets. I know that no matter what, the guys and I Will keep bringing this street battle because it’s our sport in it’s purest form. I would love to say most respected. There’s always a party with a ton of crazy stunts in between, and what beats that? I’ll wait… See You in 2014 for the 14th Annual KY Battle…