Denver’s “World Famous” Mile High Battle just celebrated its 16th showing and the homies came out in force once again. With Luke Bender still at the event’s helm, the MBH lived up to its reputation as a great day for blading. This year Jarrod McBay talks you through the day while Brett White and Adam Montoya deliver the optical element. Now get ready for a torrent of verbiage from Mr. McBay…

Every September for the past 16 years, Denver has been host to the Mile High Battle. Founded by Adam Bender and Tyler Higgins back in 2000, the duo gave up the marathon in 2009, leaving Adam’s brother Luke Bender to man the reigns. Luke appeared to have retired from the task in 2013, but his love for the culture has kept him in the saddle for an unspecified period of time moving into the future. Like most contests, months of planning was involved — picking spots, organizing sponsors, building ramps, and, lest we forget, organizing the all important after-party! 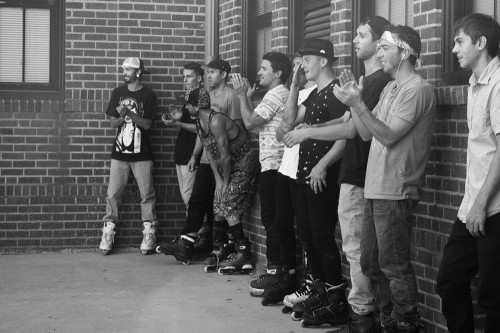 Luke bravely scheduled the meet up for 11:00 am — which we all know is like the crack of dawn for most bladers. In typical fashion, the first stop was a friendly ledge spot with several curved ledges in a long row. The night before, Luke, Nolan Wojciechowski and I spent the better part of an entire evening waxing everything up — using about a box of Gulf Wax apiece to get the job done. As the warm-ups got underway the following morning, I strapped on my NJ5s and got my camera rolling. At 1:00pm on the dot, Luke laid down the law and got the contest underway. ONE insider Jeff Stanger pulled me to the side to get a clip of him doing a fakie roll across a ledge to cess slide down. I was also able to catch a number of good follow shots, including a great one of Josh Hayes doing a fastslide on the inside of the curved ledge. I wanted to get a little closer though, so I dug into the bushes behind the ledge just in time to catch Cody Lampman rinsing a negative makio and Nolan lacing a true AO soul. It was quite a mission though because almost everyone who missed their trick nearly crashed into me. Maybe I was a teensy bit too close?

Unfortunately, I had to let my camera cool down and I totally missed one of the best tricks of the day, which was Smiley’s true top soyale up the ledge (and against traffic). He nailed it in the way only he can. About that same time Jarrod Banning cruised into the first spot, fashionably late as ever — just in time for the spot to get busted by the Law. Johnny Lawman was polite enough, though, considering there were just under a hundred of us. He took Luke’s name down for appearing to be the ringleader but otherwise let us go without a hitch. In fact, he was nice enough to actually let us finish the spot since Luke said we were basically on our way out anyway. Five minutes doesn’t make much difference as far as a comp in concerned, but it certainly does a lot for the spirit of goodwill in the ongoing game of cat-and-mouse we play with Johnny. We all loaded our gear and embarked down I-25 for the twenty minute drive to the next spot. 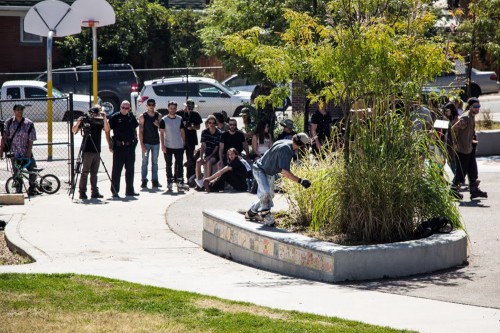 On the way down, I reflected with Frank Stoner on how juiced I was to be helping out with the filming. He and Will Enzenauer agreed to judge the comp and I was really happy to be behind the lens instead of behind the ol’ judges’ notebook for a change. Beyond that, I take Jan Welch to be my mentor when it comes to filming, so when we arrived at the second spot, I followed in true Jan fashion and found myself the best, easiest, laziest spot to film from to catch all the boys doing their thing.*

Spot Two had a flat rail on the left hand side going up to a long ten-stair that had down rails on each side and one in the middle. Over the far right rail was a bank that a few brave souls would eventually make use of. At the landing there was about 20 feet of flat concrete before a smaller 3-stair that led blindly into the street. Judges Frank and Will took up the task of catching people as they landed so that fools wouldn’t just be careening out into traffic. Several bladers and other homies rose to the challenge, and maintained a perfect record of keeping dudes from getting nailed by the steady flow of traffic that kept whizzing past. 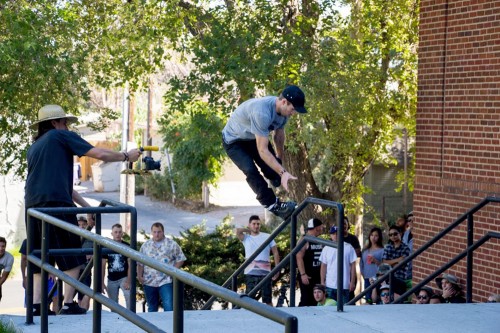 Josh Hayes led the charge in trying to do the flat-to-down-rail transfer, eventually landing a topsoul to soul. Ian Forgette followed suit, getting his name in the judges notebook for a front nugen to topsoul to royale transfer, and Jeremy Townsend blew everybody’s mind with a sweaty to stall to farside negative mizou transfer. About the same time, Maryland native and Colorado transplant Kevin Barr impressed the crowd with a laundry list of natural and switch tricks, leaving a number of people to wonder, “Which was natural?” I skate with the dude all the time and even I can’t tell anymore.

Near the end of our time at Spot Two, Ben Weis—in true Ben Weis fashion—felt it was time to up the ante. With some well-timed assistance from Florida native Jesse James, Ben climbed up the ricketiest, sketchiest gutter to the top of a nearby roof, presumably to jump the 15 or more feet down to the bank on the farside of the right hand rail. Hilariously, he had a sudden moment of clarity looking down from the top and announced, “FUCK THIS… I’m getting MARRIED TOMORROW!” With a portion of his pride tucked away, he shimmied down the wall and still managed a fairly impressive (and graceful) one-handed-hang to plop-off safely down to the gravely bank. I’m not sure if it was the potential of a wife’s scorn or if ol’ Ben is finally settling down a bit, but either way we all had a sight to behold.

We made our way back to town for Spot Three, which was a complicated sort of ever-changing affair. Originally, we had imagined as many as five separate props for the final spot, but the real contest only wound up utilizing two or three. The main staircase was a four-flat-sixteen set, with plywood set up on the upper stairs to give speed to approach the bigger set. At various points during the two hour final session, the setup included a wallride to p-rail setup, a p-rail to wall ride set up, a plain Jane wallride setup, and at least once or twice, nothing on the staircase at all except for the 16 stair rail itself. Nearby, and with perfect precision to cause hair-raising cross-traffic near misses, we set up a launch ramp to a shoulder-high ledge that was about 30 feet long.

Courtney Cain, Kevin Barr, Brett Cartee, and some others set to work sessioning the un-bricked ledge from the launch ramp—with Courtney being the first to pretty much grind the whole thing back royale. While that session got underway, another crowd including Jeremy Spira, Cody Lampman, Jarrod Banning, Nolan Wojciechowski, Jeremy Townsend and bunch of others got to work creating complete chaos with a high speed intersection splitting exactly between the landing of the big staircase and the take off for the launch to grind setup.  Hectic doesn’t even come close to describing it. Hopefully that sense of panic will make it into the edit. 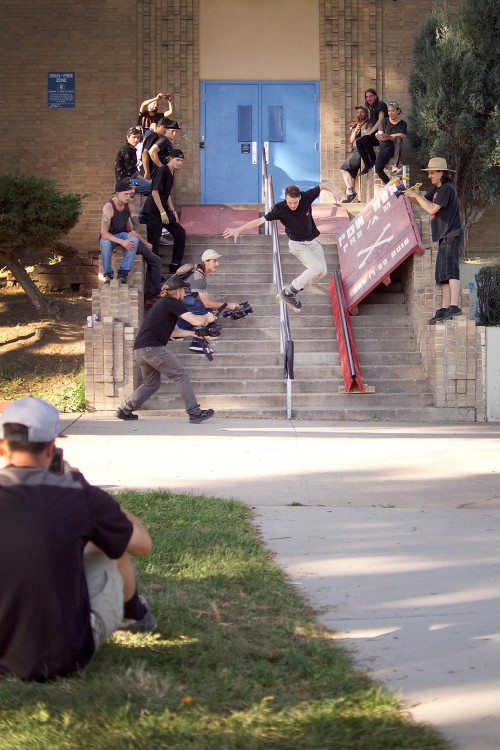 The highlights of Spot Three included some pretty treacherous stunts. Nolan rinsed a switch-fish to wallride on the big stairs, Banning took best trick with a wallride to topside soul transfer on the big rail, and Cody Lampman just about curled everybody’s hair with a wallride to double fish-bonk—I don’t know what else to call it (maybe Frank can write an article about what to call it)—and about a half a dozen others pulled off various wallride to p-rail or bank to rail tricks that were as deadly as they were impressive. Be sure to watch Luke’s edit for full coverage.

After taking some time to regroup, the mob was directed to reconvene at one of Denver’s best dives, the Squire Lounge. I’ve been told that the bar itself has been completely revamped during the last few years, and it shows. Luke cajoled somebody who owed him a favor into setting up an amazing ‘90s photo booth — complete with an elementary school-era lazer background — to get shots of everybody and generally help whoop up the mood. After a good while boozing, Luke took up the MC to thank everybody for coming out, skating, supporting, sponsoring, and keeping the scene alive. He’s a better public speaker than most two-term congressmen, and he impressed us all with a genuine sense of gratefulness in drawing attention to those who made the 2015 Mile High Battle possible. He eloquently thanked Geoff from Sunshine, Ground Control, Razors, Rollerblade, Luxor Armor, ONE, Sic Urethane, Haunted Wheels, Oak City Skate Shop, Street Urethane, Decibulz, Rollerwarehouse, Mykel Fatali, and Adam Montoya for making the awesome trophies that went to First, Second, and Third place winners. He also did a great job of recognizing by name everybody who helped out, which is something I hope more contest and event organizers will do in the future.

In the end, Luke got together one of the best contests I’ve been involved with in a long time, and he organized more booty, prizes and cold hard cash than is customary for a regional contest like the Battle, and he did it all with more poise than I’ve seen in most of my days as a blader. After all the announcements, typical boozing ensued and many a hangover resulted. For my part, I was thrilled to be involved with the Mile High Battle, and I look forward to many more in the future.