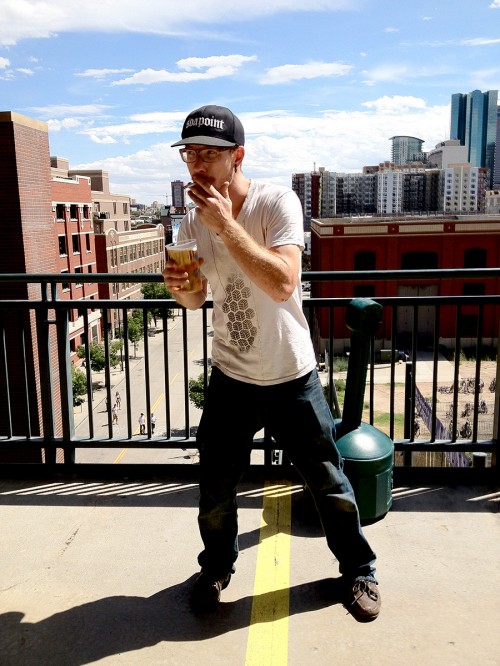 Give us a history of the Mile High Battle.
This is the 12th year of the epic Mile High Street Battle. It has gone all over the state of Colorado: North, South, East and West. The last couple years we’ve actually been including live music as well as editing and filming for an edit of the day, as well as having raised some significant prize money to get people motivated to come from around the country (and even some people from around the world).

What are you doing in the way of fundraising for the event?
As far as fundraising goes, we are holding a couple of events: the standard keg party and the grand Beer Olympics (including many outdoor beer sports for a tournament style competition to raise money for the winner). We’re also doing a re-release of the Free Roilen T-shirts at a party and will be selling those for donations, as well as contacting sponsors. We’ve started a PayPal account to get people to donate and our website is now live, sharing all this with the public. We are also going to release prints of the Mile High Battle 12 flyer on shirts and possibly producing some stickers. Buy some shit.

What’s the biggest challenge you face when throwing a contest?
The biggest challenge when throwing a contest is trying to keep it fresh and new as far as spots are concerned… after 11 years of the MHB we have destroyed many spots all over the state, making it hard to find new spots that can actually accommodate everyone! This issue has forced us to get creative to find and create spots to keep people coming back.

What are some of your favorite MHB memories?
I have many memories of the MHB over the years. Some of my favorites are… Successfully shooting, editing, and premiering the video from last year’s comp all in one day! Getting a call from Colin Carr last year while I was frantically editing where he said “everything is going good and just wanted to let you know Lil’ Chris just grinded the top of your U-Haul”…WTF! Also, last year when the police showed up and instead of kicking us out decided to hang out and film the comp with their phones! Two years ago when we successfully installed a rail over a drainage ditch accompanied by live music by Otem Rellik… the rail was killed and also killed many contestants. Seeing the Roll Series come and show their support from Chicago! Dustin Halleran doing one of the biggest 180s I have seen at Redrocks Community College, watching Broskow and Aragon battle it out on a 20-stair rail, and seeing PJ kill the comp and almost kill himself only to win the contest!

Do you ever see a time that you won’t be head of contest operations?
I will continue to do what is necessary to keep the MHB cooking but if there is a person who steps up and wants to take it on I will step down and support the MHB as I did when Mr. Adam Bender was in charge! FWHAT!

For more information on the Mile High Battle, visit the official website

For more information on scene coverage in Colorado, visit scumpire.com