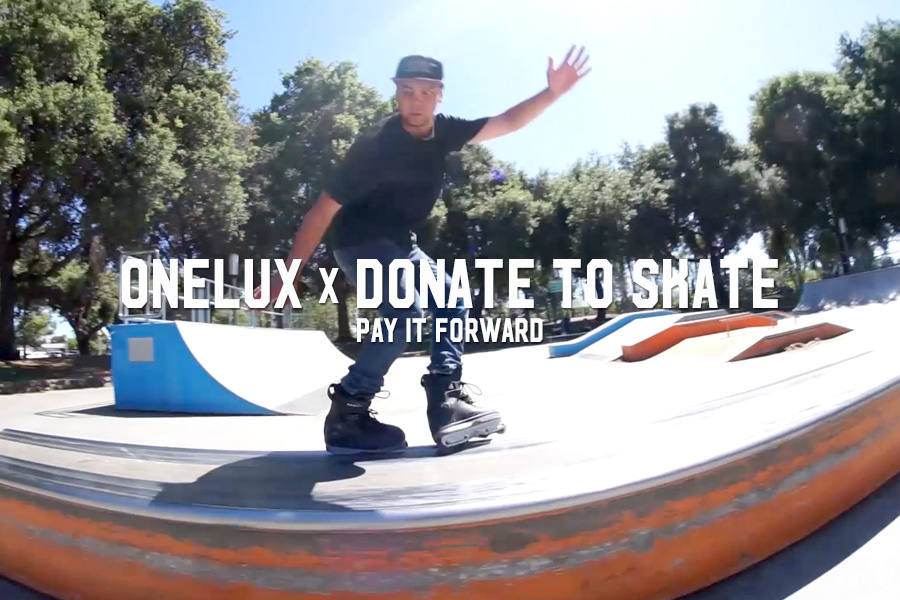 Written by Steve Steinmetz - Published on Wednesday, May 9th, 2018

It was a beautiful Saturday morning when I got to Lakewood skatepark in Sunnyvale, CA. I was greeted with friendly nods and hand shakes from friends that I skated with back when I used to live in the bay area, as well as from some new faces too. It was great to see everyone at an event that promoted donating skates and parts to people that were less fortunate in other parts of the world, mainly Mexico and El Salvador.

Kirk aka “Keezy LUX” of ONELUX Brand decided to throw this event together after his success with his Bay Area Street Competition back in September. Keezy and ONELUX have really done an amazing job bringing together bladers under a common umbrella of unity and leading the bay area skate scene into the future.

Bay area locals both new and old came to hang out, chill, bbq and donate their skates and parts to other bladers that need donations to keep their passion going. The skatepark is smaller than your average park but it has everything a blader would want, and best of all it’s mostly empty even on a Saturday.

In order to entice more bladers to come and participate in the event, Keezy also had a best trick box competition where the winner came away with $300. In my opinion, I think people were more than happy to contribute to the growth of blading through community outreach and didn’t really worry about the competition or the money. It was great to see all the former employees from Aggressivemall not only donate thousands of dollars worth of merchandise but also skate their assess off because they just love to blade.

I briefly got to speak to the winners of the box competition, bay area legend Korey “Sneaky” Waikiki and his homie, up and comer Stephen Babcock aka The White Wolf. They agreed that it wasn’t about the box competition, even though that was fun and they certainly did some tricks they were proud of. Instead, they participated in the event because they believe in Ke vision of donating skates so we have an opportunity to give back to a community that has given them so much. They wanted to support the sport that they grew up doing because they would love to see a younger generation enjoy blading like when they were younger.

Walter Ruiz, who used to live in El Salvador but now lives in Arizona, organized the transportation, with help from a generous donation from Travis at BladerUnion. The car was full of new frames, skates, liners and wheels, and was headed down south across the border to hopefully find a new home for someone in need of some new gear.

Even though we have many privileges and benefits of living in the United States, many kids are not gravitating towards rollerblading and that’s unfortunate because we have such a great sport. However, we can do something about it by recognizing growth in other parts of the world like South America, Central America, and Mexico. That being said, just because our leadership in this country is deciding to put up physical and metaphysical walls to create more division between nations, does not mean that the people need to follow that trend. By recognizing that we need each other to flourish we also recognize the humanity in each of us and the ways that we want to show each other how great our sport is and that we are here to welcome them when others have ostracized and devalued them. We as a community can rise up against that tyranny and create opportunities for bladers outside of the United States. Events like Donate and Skate can help usher that new generation into skating.

I leave you with these parting words it only takes a vision and someone to see that vision through. We are stronger together than we are divided against each other. So do your part instead of selling your gear for a few bucks set up a donation at your local skatepark, or shop and see if we can still ignite some interest both here and abroad.