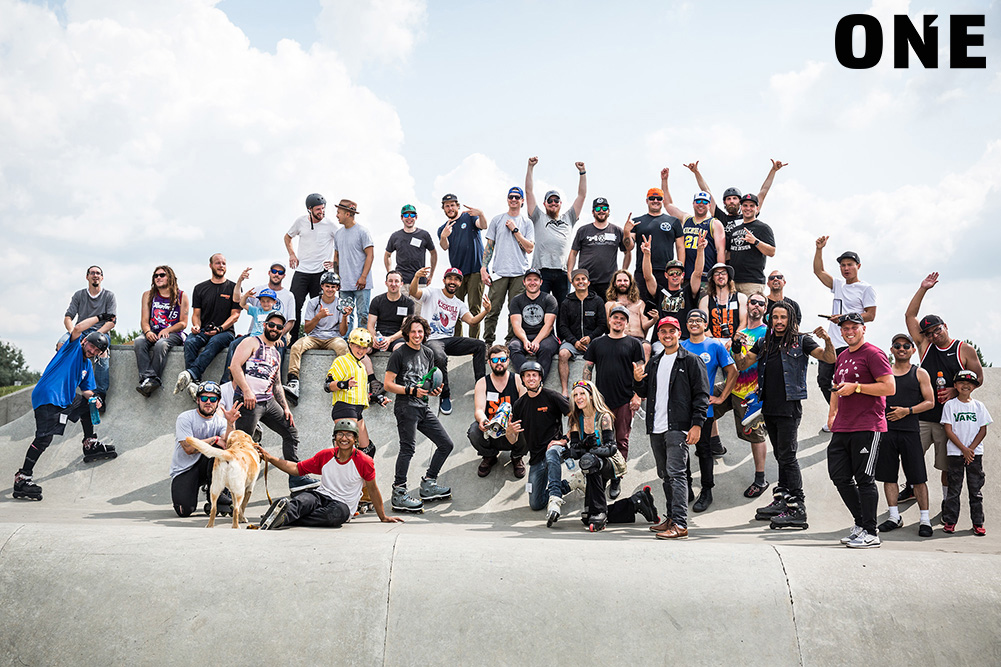 Where does change come from? Sometimes it starts with a group of friends joining forces to host a new blade series event in their area. Enter the inaugural Shredmonton blade event in Edmonton, Canada — which just wrapped cup its first year with a strong showing in a region that has been lacking for its own blade events. Grassroots comps and recruiting is crucial for blading to perpetuate itself and create a strong future, so read on to learn about how Danny Thepsouvanh and his team did it, what innovations they brought to the formula, and see photos by Chris Wedman that show off just how much rad blading went down the day of the comp! 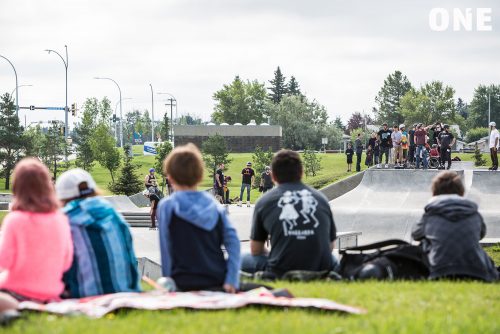 Chris: How did you feel the inaugural Shredmonton Inline Skate Series went overall? Did you feel you accomplished what you had envisioned when you started planning this event?
Danny: Overall, I am very pleased with how well the event went! There were a few minor details that I would have changed (and likely no one else would have noticed). but overall I feel like we accomplished what we had set out when we started planning this event in September, that is, we held a legit inline skating event that highlighted the blading community and got some kids in skates. And it looked like everyone had a great time! 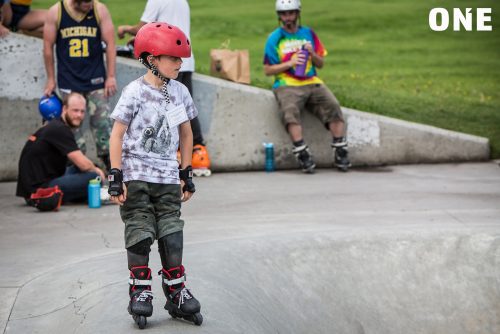 Why don’t you give us a run down of the few days leading up to the event?
Leading up to the event was pretty hectic and exciting. Despite planning for the past 10 months, I found myself doing some last minute stuff like printing waivers, assembling registration packages, making name tags, and picking up shirts. I had a great team behind me, with my good friend Aidan Sander and my wife Mandy helping with the last minute details. My mother in-law even flew in to help with childcare, and if you’re a blader dad you know you can’t put a price on that! 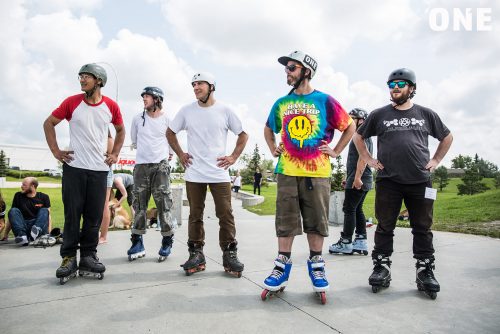 The excitement was palpable, with bladers flying into Edmonton from Vancouver and driving up from Calgary, a mini-blader party was inevitable, which was good because we were stressing about the weather. It had been raining for days before the event, with the forecast changing from rain to sun almost every other day. Having no “Plan B,” this made me, and all the bladers coming into town to compete, anxious to say the least. 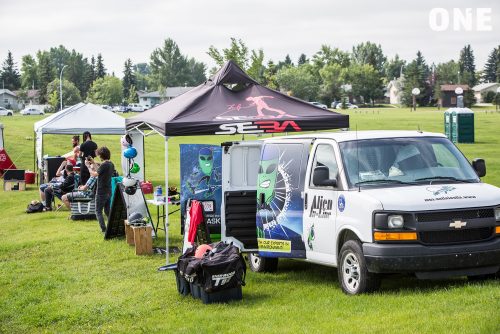 Damn, sounds pretty hectic, which leads me to my next question: how did the actual event play out? Can you give us a rundown of event day?
First off, we lucked out — the clouds parted, and Mother Nature provided us with great weather! 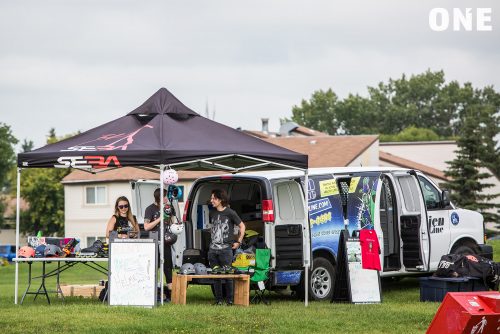 The morning of the event we proceeded to the skatepark about three hours before the event. That’s where I met Alien Inline Instructors Jenna Slater and Christine McCabe, who were setting up their inline skating instruction booth/mobile skate shop. With a giant cambro of coffee provided by my brother, volunteers had the fuel they needed to set-up the site. We made sure to give blading a strong visual presence, so we set up yard signs, sandwich boards, banners, a judges/sound booth, a rider registration booth, an athlete’s tent, and a podium set with our sponsor’s banner nearby. 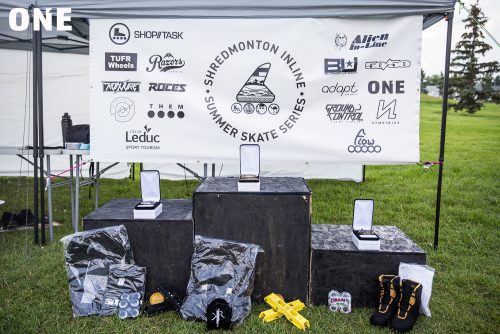 We wanted to make sure the public and passer-byers knew that blading was alive and well. This was reflected by the fact that we had 40 (yes, 40!) bladers registered to compete. I think the last time 40 bladers congregated in Northern Alberta was back in the CAT (Canadian Aggressive Tour) days in the late ‘90s. With our audio system set-up, we sang our country’s national anthem and introduced our judges. 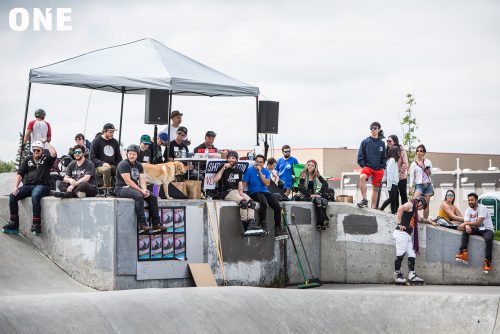 The first heats went off with all of the competitors getting their legs under them with the first of two 45-second runs. A nervous excitement was in the air as bladers performed for the growing crowd. The group of 40 was cut down to Top 10 by our judges. During deliberation, Alien Inline held their first inline lesson that saw a group of young kids strap up and performed blading basics (think french fries/pizza type instruction).

Then Top 10 saw some of Western Canada’s best bladers like Dallas Kurtz, Sheldon Lapointe, and Tommy Chung battle it out. Competitors were becoming more-and-more confident as the runs progressed, with local young-ripper Alac Rice throwing down with the vets. While the judges debated on which 5 skaters would move on to the finals, Alien delivered another free lesson.

The finals saw the Top 5 elevate their blade game with Dallas, Sheldon, and Tommy moving on along with KT Extreme himself, Kenny Talpa, and recent Columbian import Carlos Alexander Carreño, aka Chaca, leaving it all out on the world-class City of Leduc Skatepark. The judges were left to call the Top 3, but at the end of the day it would be The Vancouver Wildcat Tommy Chung that took home the custom-made exclusive gold Shredmonton Bladers medallion. 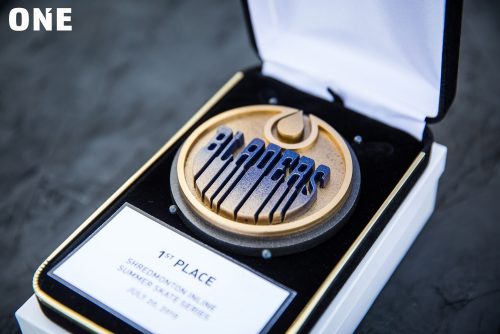 The Coach himself, Dallas Kurtz, skated consistently throughout the day, and elevated the difficulty with each of his runs earning him silver. Sheldon “On-Pointe” Lapointe put together a semi-finals run that would probably have won him the event, but he couldn’t quite put together a similar performance in the finals earning him the bronze. 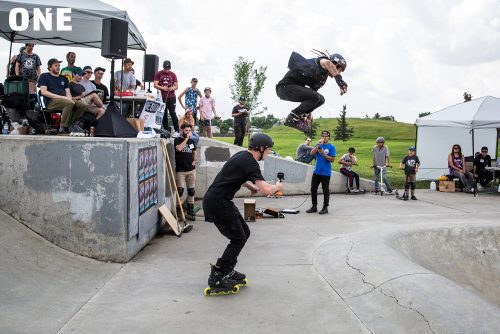 Sheldon also battled local ripper Jack Phavone for the TUFR wheels Best Trick Award, but it would ultimately be Sheldon’s massive 360 from the judge’s platform into the waterfall that would earn him best trick rights. Alac Rice, the 15-year-old prodigy from rural Alberta, was given a nod for Up & Comer with solid skating throughout his runs. With comments like “this kid rips” and “we were rooting for him!” he was also a crowd favorite. 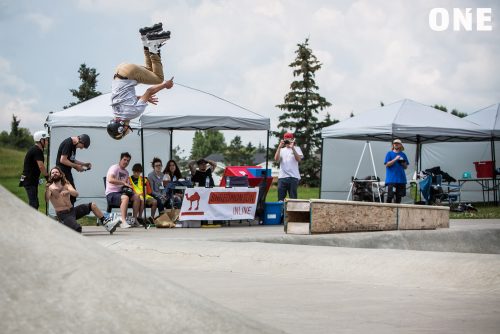 Sounds like the event went off without a hitch! I heard the Shredmonton Inline Summer Skate Series is also considered a Blading Cup qualifying event as part of the Blading Cup Park Series. How did this come about?
This designation was kind of last minute but it was the “perfect storm” with our friends Leon Basin, Danny Beer, and Quintin Chung down in California for Forecast Tradeshow, hanging out with Jon Julio a bunch I guess this was brought up. JJ was down to support, and now everyone who skated in our comp earned points towards the Blading Cup Open/Pro Divisions! It’s very cool to be affiliated with anything that has JJ’s name on it, and we’re honored to be considered among some of the top blading events held in North America. We were even featured on local news talking about the Blading Cup! 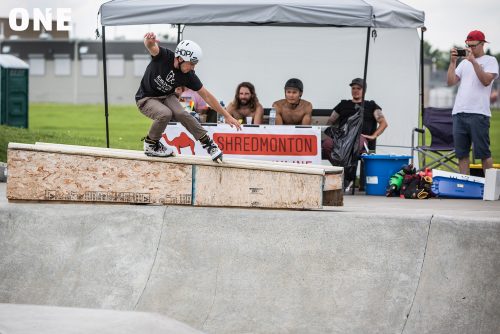 What’s next for Shredmonton? Do you see this event turning into an annual thing?
Well once we make sure all of our invoices are squared up, we’ll start putting the feelers out for a venue next year, as we will be trying our damndest to make this an annual event. We strongly believe blading deserves to be celebrated with events like ours. So yes, we’ll be coming back with another event next year. We can’t promise it will be as big as this one, but we’ll approach it with the same love and passion for blading that our inaugural event had. 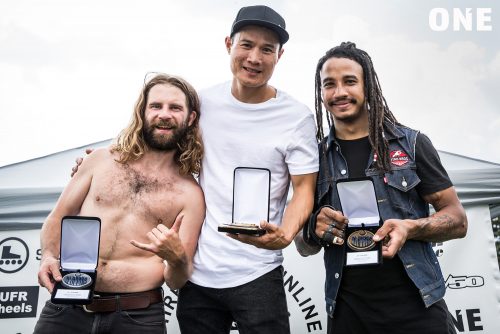 Most interviews usually end with an opportunity to shoutout people and supporters so why break with tradition?
Ha,ha! Yes! First and foremost, I want to shout out anybody that has supported our event in any way. This includes anyone that has bought a shirt, stickers, and/or registered for the competition. Without you we would not have had the financial backing needed to put on the event. Secondly, I want to shout out Mark Greenwald and Alien Inline for taking a chance on our event, and for being out on the front lines getting people into skates, as this is what will grow our sport. I also want to give a huge thank you to the City of Leduc for being a supporter of our event and welcoming us to their City with open arms. Also, to all the grassroots blading companies that stepped up and supported an event in its first rendition, not knowing what that meant for them so thank you Shop-Task, Them Skates, ONE Blade Magazine, Tufr Wheels, Roces, Ground Control, Razors, Konjure, Fifty-50, Bladerunion, Shaun Unwin and Flowskate for hooking up the comp t-shirts, Adapt, Symmetric, and House of Wheels. I also wanted to say thank you to local blader Barry Butler and ProSource Flooring, who hooked up a giant moving van to help transport the tents, rails, boxes, and other event materials! Also thank you to Circle K for coming out and keeping people hydrated, and Nitrobros for keeping people caffeinated! Also a very big thank you to local blader Dylan Plowman, and my sister Lindsay, for making my crazy ideas look good on t-shirts, posters, stickers and social media. Until next year!

For more information about the Shredmonton Inline Summer Skate Series go to www.shredmonton.ca and on Instagram @shredmonton.inline

Questions and Photos by Chris Wedman