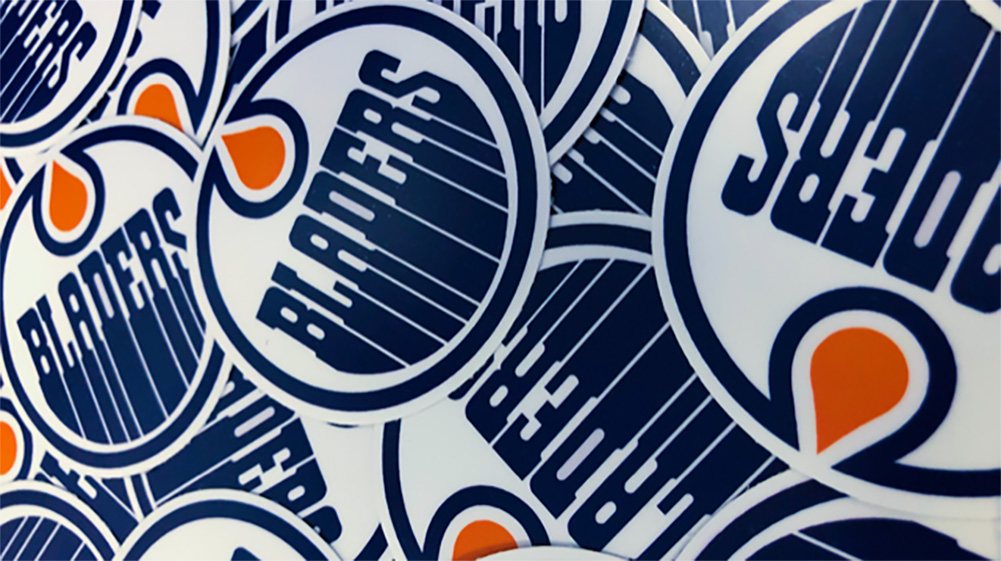 Up in the Great Western North of Canada a new event is taking shape. Thanks to the hard work of Danny Thepsouvanh and the Shredmonton Crew, this year our friends above are introducing a new tradition for the Edmonton scene. But in a clever twist, Danny has paired with Alien Inline, a professional inline skating instruction provider that works with the schools throughout their region. In an area and sport where the average participant age is more than old enough to drink legally, this step looks to reach a younger audience. We’re super supportive of this strategy, and wanted to make more people aware that this is a method we should be thinking about more often. So without further delay, please learn all you can about the upcoming Shredmonton 2019 inline event.

Tell us who you are, where you’re from, how old you are, and how long you’ve been blading.
My name is Danny Thepsouvanh, I’m 36 years old and I am from Edmonton Alberta Canada. I’ve been blading for about 22 years I think (I’ve sort of lost track to be honest). 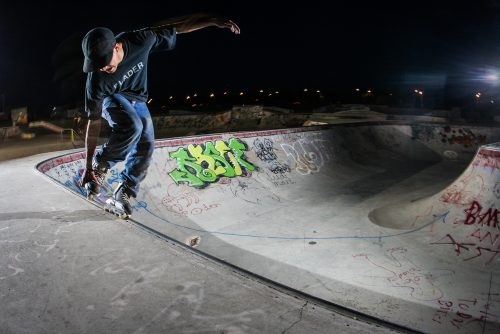 Edmonton has a pretty tight blading crew. Why don’t you tell me about the scene in Edmonton a little bit?
The Edmonton blading crew IS tight. We prefer to be referred to as Shredmonton however. The Shredmonton crew is probably a lot like other crews out there. We’re a group of rollerbladers that are passionate about having wheels on our feet. Some of us have kids, some of us work white collar desk jobs, some of us are blue collar grind it out in the trades guys. Most of us are grown-ass men in our 30s, but we are seeing a bit more diversity. We all try to get together to skate, push each other, film, and have fun as much as we can. As far as numbers go, we have about 187 members on our Shredmonton Inline Facebook group (granted not everyone of those people are skating but they do have an interest in either following blading and/or are connected to skating somehow) which is pretty impressive for a Northern Alberta city that has a LONG winter that can make it challenging in terms of actually being able to skate and stay motivated. 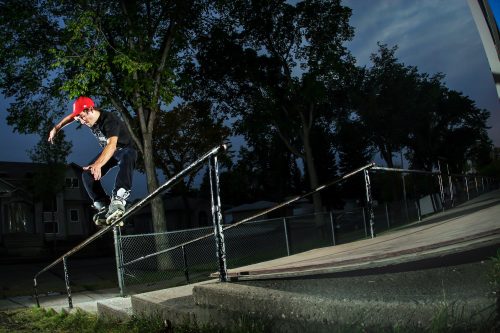 Speaking of getting the blading community together, I heard there’s an event Shredmonton has been working on for this summer. Can you tell the readers a bit about that?
Yeah for sure! Shredmonton Inline is very excited to announce that we will be hosting our inaugural Shredmonton Inline Summer Skate Series! It’s going to be an inline skating event that includes an inline skating competition featuring Western Canada’s best skaters. We’ve also partnered with Alien Inline to provide members of the public an opportunity to get their feet into a pair of blades and have some instruction from SkateIA Certified instructors at no cost. The event is taking place at the City of Leduc Skatepark (~20 minutes south of Edmonton) on July 20, 2019 aka 7/20!

What is Alien Inline? Why was it important to have them involved with your event?
Alien Inline is a professional inline skating instruction provider. They work in a number of schools all throughout Alberta providing kids an opportunity to try inline skating out during gym class. They provide all of the safety equipment and skates to students. A number of their former and current staff are really good friends of mine. They are out on the front lines not only showing kids how to skate, but also showcasing inline as a way to have fun and keep physically active. I know they’re out there having an impact because every time I show up to a skatepark on rollerblades in rural Alberta, the first thing a kid asks to me isn’t “Can you do a back flip?” but “Do you know Mr. D from Alien Inline? He taught me how to rollerblade!” It was important to me to have them involved because I felt there was a need to inject some new blood into the inline skating community in the Edmonton Region. Like I mentioned before, the people that are currently doing it are mostly men in their mid-30s. We felt having Alien and their experienced instructors involved provided an opportunity for us to reach out to the general public in an attempt to get people to try on skates in a safe and fun environment, while promoting skating and hopefully getting a few people hooked.

Why is it important to you to see younger kids get into inline skating?
I think I’m like a lot of other older rollerbladers in that I just want to see blading live on. I want other kids to experience what I experienced when it comes to blading. The satisfaction of learning a new trick. The thrill of running away from security guards. The friendships that last a lifetime. The best way to do that is to appeal to young, impressionable minds, not unlike myself and my friends when we first started. I think it was Colin Kelso on the Jumpstreet Podcast that talked about kids picking up skating and falling in love with it like we all did, it’s just a matter of exposing them to what skating really is.

Cool. Tell me a bit more about the Shredmonton comp. What work has been done so far to prepare for 7/20?
We have secured the venue, the City of Leduc Skatepark, with a venue deposit. We have also been successful in garnering support from the City of Leduc’s Sports Tourism Department in the form of a grant worth $1000. This will go a long way in helping offsetting costs associated with the event like liability insurance, audio equipment, portable toilets, and other logistical things that come up. 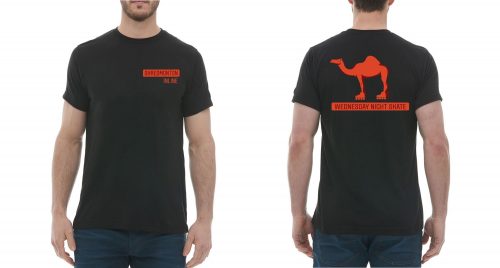 We’ve also run two t-shirt drives to help raise funds. The first t-shirt we released was our Wednesday Night Skate Tee featuring the ever-elusive rollerblading camel who knows that not even hump day can get in the way of a sick session! We just wrapped the pre-order for our second shirt the “Shredmonton Bladers” t-shirt that bares a striking resemblance to a local sports team. It features a super clean logo designed by local ripper Dylan Plowman over the left breast, close to the heart, where blading resides for every member of Shredmonton. 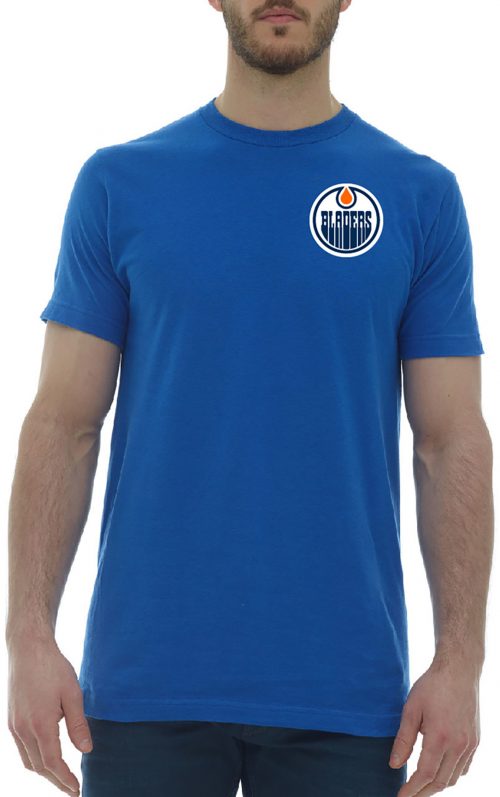 We’ve also secured a number of sponsors that have committed to providing prizes for winners and other goodies and giveaways.

We’ve also secured a food truck that will be serving food at the event! We’re excited for visitors to try our Alberta Beef!

We’ve also released a very dope flyer for our event to help generate hype. The graphic for the flyer was designed by again by Dylan Plowman and the lettering was done by my talented sister Lindsay who is a marketing wizard. We’ve provided Alien Inline with copies of our flyer to hand out at local schools, while a local blader Brando Alexander has taken it upon himself to plaster flyers at every skatepark in the Edmonton Region.

There are also a couple surprises in our stash tongues that people will have to wait to see as the date of the event draws nearer. 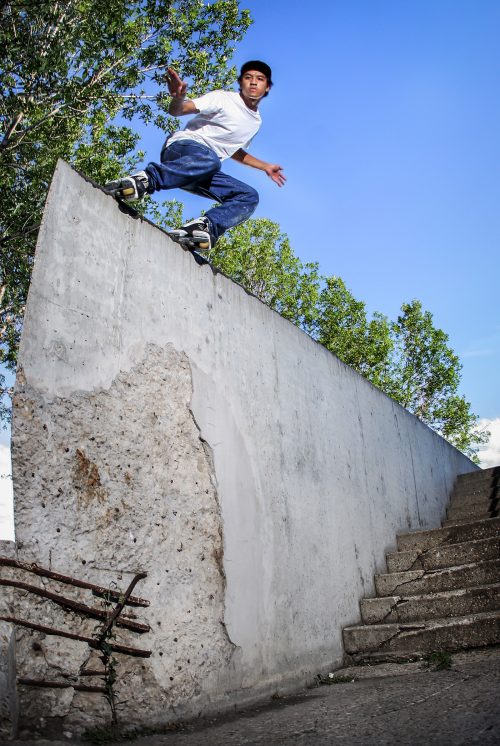 Well it sounds like things are coming together for your event. Are there any shoutouts you want to give before we wrap this up?
I’d like to shout out Justin and ONE. ONE Magazine was actually the first to respond to our sponsorship call out, and to back such a grass roots event as ours shows where their hearts are at. I also want to thank the City of Leduc Sports Tourism Department for considering us and allowing us to access their grant money. This money will go a long way to ensure our event is a success.

A big thank you to all the other sponsors who have either sent product, cash and other forms of support: Alien Inline, Roces, Geoff at Razors, Leon at Shop-Task, JJ at Them, Ground Control, Rob at Konjure, Law at 50/50, Grayson at TUFR Wheels, my good friend Shaun Unwin of Flowskate fame who has been giving me feedback on almost every aspect of planning an event like this, you (Chris Wedman) for digging through the archives to find some dope blading photos from the Edmonton area, everyone who has purchased our shirts, my Shredmonton crew for holding me down, and last but not least — my wife Mandy, and my daughter Charley, and newborn baby Franky, who let their daddy be a kid at times too. 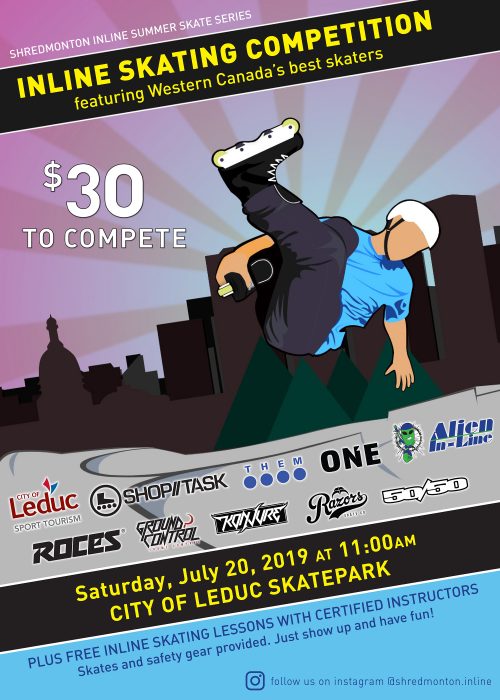 For more information about the Shredmonton Inline Summer Skate Series go to www.shredmonton.ca and on Instagram @shredmonton.inline