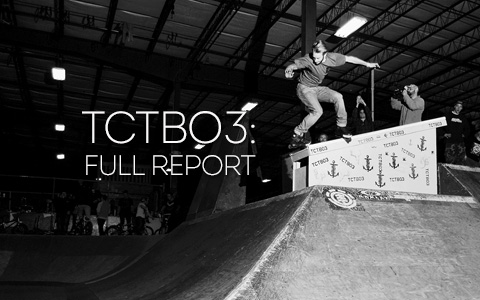 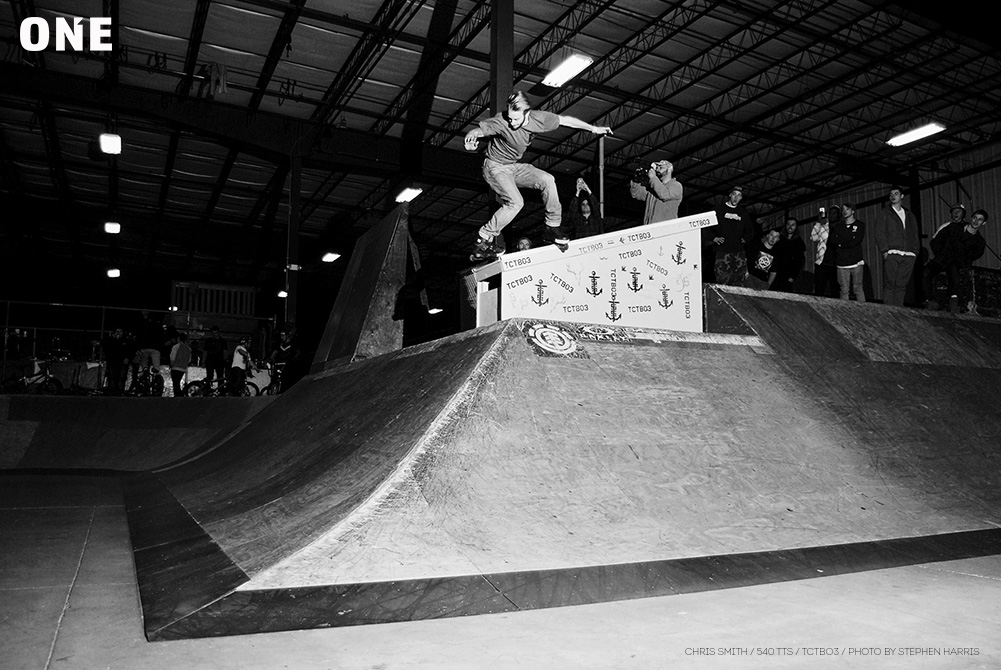 A few short weeks ago bladers from all over the midwest and southern regions descended on a skatepark in Kentucky for the third Too Cold To Blade Outside contest. Hosted by Brad and Chad Anthony, the TCTBO3 event is as grassroots as they come, and proof that there’s always a reason to get your friends (and their friends) together for a day at the skatepark. And hey, if you can make it into a sweet park comp, bonus! Check out the write up and pics for a full story of how it all went down.

Soon after The Motortown Classic announced their revised dates for this year’s event I got a phone call from my brother Chad saying “I am thinking about hosting another TCTBO (Too Cold To Blade Outside).”

Just like the vast majority of rollerbladers, I too have grown accustomed to an event in the winter. 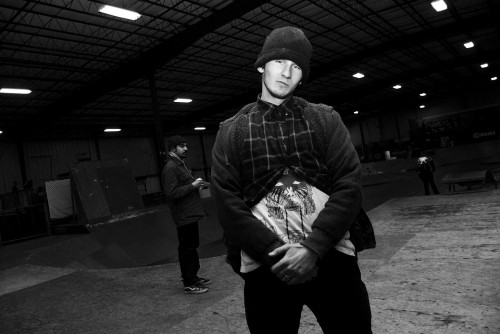 Growing up, we always talked about “contest season” which began in October with Hoedown, then Bitter Cold, and finally Superhick. There were usually some local events with n or shortly after those months. Soon after, Pow-Wow was added to the schedule, and then began preparations for The KY Battle. Our schedules were jam packed with blading events. But Bitter Cold was a staple. Something about committing to such a long weekend, participating in the tradeshow, the expectations of seeing our industry’s finest going head-to-head for fluctuating prize purses and in the end just having a rollerblade family reunion. Judging by the turnout at TCTBO3, we are not the only people who share that desire.

(Organizing blading contest has became much easier. Anyone considering hosting one please just follow the steps listed at the bottom.)

Obviously, from an organizational stand point, there is a lot of work that goes into setting up an event. Especially if you add dynamic elements like vendors, food, etc., but we are fortunate to work in an industry that breeds entrepreneurs thanks to preceding events like BCSD. 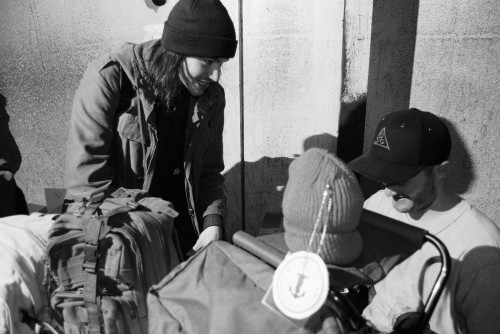 Ollies Skate Park was gracious enough to provide us with a large indoor skatepark with seating and plenty of room to spectate. We were given a Sunday to make it all happen, which is not typical for a weekend event. Personally I was reluctant about the day, but was reassured time and time again from my brother “stop stressing, the homie’s will come” and boy did they come. What was imagined to be a session with friends to provide relief to the winter blading blues turned into a full-fledged rollerblading contest. People commuted from Florida, Georgia, North Carolina, Michigan, Ohio, Kentucky, Tennessee, and more. The contest itself was a mini ramp jam on a huge ramp with plenty of grinding room and plenty of air space to boost. 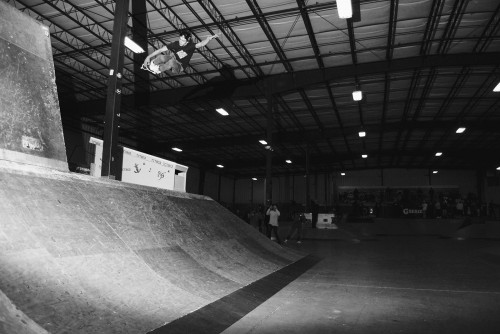 This was followed up by a unique event where the 70-90 competitors split up on two sides of a designated street course with smaller and creative obstacles. Hearing Chad on the mic was nearly impossible thanks to the loud ‘90s grunge music playing for the 10 people that were not rollerbladers. So everyone pitched in to police the course and give each other a chance to show off. The numbers were knocked down quickly and only a few were left standing. Some went to the air while others got technical on the smallest obstacles.

Afterwards was a scheduled lunch break, but the only thing everyone was hungry for was a shot at the W. Event organizers from Pow-Wow were present and offering up the first place prize which included entry into the Pro event and camping. It felt like we were part of a circuit from the ‘90s, what with seeing people wanting to win this event, just to get to the main event.

The third and final chapter of the day was taken to the main street course, which had a lot more room to move and much larger obstacles. There were so many people signed up that the heats were short and fast. Some competitors would finish their heat only to advance and start a new one before catching their breaths. There were so many highlights, far too many to mention in a write up. Hopefully you will see them in the video and photo coverage. 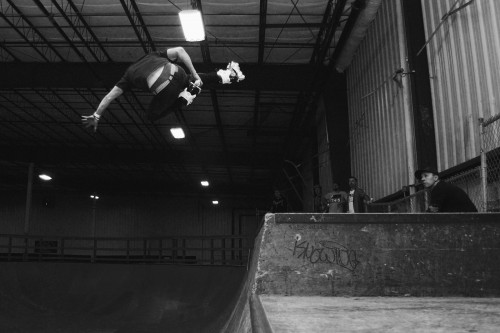 The finals were pure heat. The roster was a group of guys that I believe are quickly becoming our industries leading professionals. It’s refreshing to see these guys, although have been leading in their areas for a long time, take the spotlight as internationally recognized athletes. My hat goes off to you guys. I thought the previous generation had it hard after the loss of the X-Games and any corporate endorsements, but you all fight for this life out of passion. You spend your own money, give up your own time, promote products that you like and put your health on the line… all in the name of love. 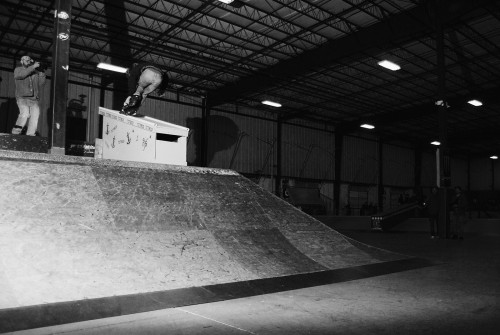 After the event people were literally running to their cars to hit the road to make it to work on Monday, which was going to be after a long sleepless night of driving in crappy weather. A small group made its way to a local restaurant to grab a burger and some community while recapping the day and planning for Pow-Wow. Yet, no matter your circumstances — work, sleep, hunger, aching body — everyone was sure to take a few moments and tell their homies goodbye. These are life long friendships forged in competition and comradery. We watch one another on computers. We tag each other in Facebook posts, and maybe the occasionally the quick phone call or text message. We often go months, sometimes years at a time before seeing or speaking. We look past internet emotions and critic’s opinions.

Something we did not realize was happening when deciding to have this “session” — we provided relief for the winter blues. We all miss what was, there’s no doubt about it, but what was then has prepped us for now. The torch has been passed for new grassroots blading events. We have a platform to improve it all, while stimulating the industry and creating memories in the act. 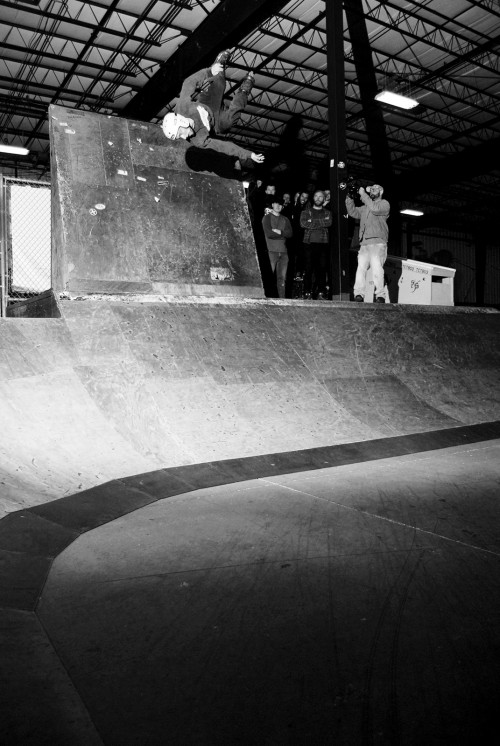 TCTBO is an invitation and challenge to everyone. Go out in your community and host an event. The homies will come. The sponsors will support. You may not raise a large prize purse, and you may not get a giant crowd, though I promise, you will have a good time and possibly accidentally create the next staple in rollerblading.

Thank you to everyone who came out and all of the sponsors for supporting. None of this is possible with out you. See you all in Florida. 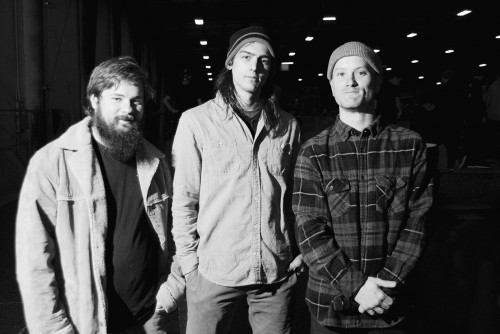 How To Create A Local Rollerblading Event:

2) Spread the word. (What once was a message board/word of mouth task has been streamlined thanks to Social Media)

3) Design a preliminary flyer that catches the eye of your demographic with clear details of venue, time, date, etc.

4) Reach out to the industry.

5) Once steps 1-4 are completed compose a new, final flyer with all details and spread the word.

Article by Brad Anthony
All Photos by Stephen Harris

And here’s the event edit by Doug Williams!

Check out the facebook page for Indiana Inline or TCTBO event page for additional footage we through together. Damn good time!