It’s that time of year when the Texas scene gets together to show everyone else how to do it. That’s right, it’s Texas Skate Series season. A few weeks ago bladers from all over traveled to Austin to skate the streets and find out who had the tricks to earn the title. Our friends at Sic Urethane there to document the comp and came through with this insightful write up plus some photos by Josh Gammill. Find out what you’ve been missing and book your flight for the next comp these guys host.

To start off this year’s Texas Skate Series we went to the capital city of Austin, the hub of the Texas scene, which is an interesting decision considering that previous experience hosting events in Austin have always proved to be hit or miss. Like last year, when the Austin comp was scheduled during torrential downpours that left much of Texas in a state of emergency. Perfect time to bring people from across the world to rollerblade, right? Luckily this year the blade gods were on our side, with a forecast that could not have been better — a few heat strokes aside.

We kicked off the weekend with our regular, and much anticipated, box session at Bartholomew park. The box forged by Frank Stoner and Jarrod Mcbay has become as important friend to the scene that we can always rely on to provide easy entertainment for the masses. But as with any good times, you are sure to run across a bump or two in the road.

As our session concluded, Walter Sanchez returned to find my car’s window smashed. His camera bag with his passport, wallet and camera gear were all stolen. With no help from the APD, we chalked the situation up as a loss, but had no intention of letting it ruin our trip. 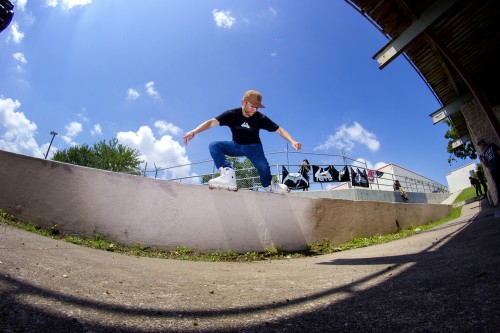 The following morning we arrived early at the meet up spot to get the party started. After the painstaking process of registration and giving out directions, we were headed out to a spot we’d recently discovered that would make for an interesting first heat. The spot was an incredible painted ledge with a slight gap to it, with a much appreciated covered overhang for the judges and spectators. 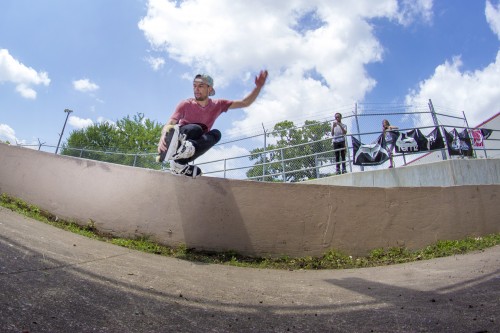 The spot was getting worked heavily with tech tricks and switch-ups, but you could tell it wasn’t an easy spot to skate. Notable standouts included TX legend John Sullivan, Wes Phelan, the man with the elastic knees, and Mexico’s best, Walter Sanchez. 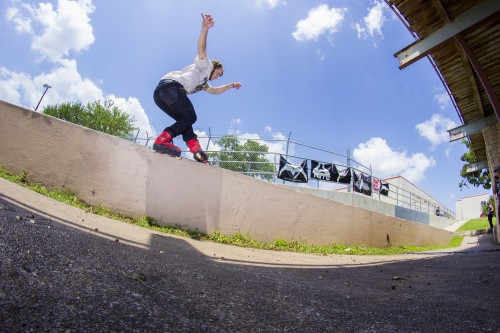 From there we headed to the second spot, located on a walking path behind a cultural center. It was a handicap rail with a slight dip in the middle, made popular by Andrew Broom and Jarrod Banning. The location was perfect, but the rail was having difficulty sliding. Regardless of our heavy dousing in paraffin wax, it was just too hot to stick. But everyone made the best of a difficult situation.

From there we headed to the final spot, the infamous Crayon rails. We have tried in years past to hold an event at this spot but the faculty has always given us the boot. Luckily this time it was Memorial Day weekend, so most of the staff was likely on vacation. With no hassle the final heat got started, with skaters getting tech from the beginning, which made for quite the competitive round. Logan Harlan aka Dench was pulling out all stops with incredibly difficult negative tricks, both switch and regular. JaQuan Owen unfortunately got a little broke off by trying alley-oop mizzou to transfer to mizzou on the other down rail. Had he not gotten hurt he surely would have landed it. (As it turns out, JaQuan actually broke his ankle at the contest, so we wish him a speedy recovery.)

But the biggest battle of the day was between Walter Sanchez and Hunter Grimm. These two were going back-to-back, matching tricks for most of the round. Walter has one of the biggest trick vocabularies and it was on full display. No spot is too hard for this guy and no trick seems out of his range. However, the man of the day was “Mr. Baglic Clique,” Hunter Grimm.

Hunter skated consistently and pulled put some of the hardest tricks of the day, first try. Which was good because one time he missed, smacked his dome, and was out of commission for awhile. Scarier still, Hunter slapped his noggin again the next week at A-Town Stomp. Not trying to be a worrisome friend, but wear your helmet, Hunter! (You’re a young cat with many good years ahead of you, so stay safe, please.) Hunter was able to pull out the single cleanest trick of the day with an insane hurricane 360 sweatstance to seal the deal on his win, which was also best trick of the day. Walter Sanchez took a very close second place and Logan Harlan took third.

Thanks again to all the competitors and spectators that made the TSS Austin a huge success. A huge thank you goes to Ray Soto for helping raise so much money for the winners, although sadly Ray wasn’t able to attend the contest because of his busy schedule. Thank you Ray, for all you do to keep the TSS running for everyone to enjoy.

We also have to pay our respects to our good friend and rolling legend, Joe Larricq. Just weeks before the competition, Joe lost his life doing what he loved, riding his motorcycle. Joe was a larger than life individual that was always the first to help a friend in need. He would go above and beyond to provide for his family and his friends. Joe was a gifted blader that would always inspire his friends and motivate them to progress. He was a brother to many in the Texas scene and Joe will be greatly missed. This comp was for you, Joe Dirte.