They call it “What Year Is It?” but I don’t remember any year where 600 bladers got together at Camp Woodward at the same time and took the whole place over. But now it’s 2019 and that’s exactly what happens, thanks to the hard work of Cameron Card and Long Tonthat, whose efforts have now united a strong force of bladers two years back-to-back in what has become a mandatory tradition for skaters from across the US and world. Because last year’s event looked so awesome, ONE made the trip from San Diego to the rolling, wooded hills of central Pennsylvania to experience it for ourselves. So for a day and a half we filmed while Sean Macgowan snapped photos, and what you don’t see here might just turn up in ONE Issue #25.

Not that you asked, but I’m gonna tell you anyway — our trip to WYII started at 9:20pm aboard an all-night flight on Frontier from San Diego to Orlando. After landing just after dawn in a city best known for a large commercial mouse, my traveling companion Sean Macgowan and I spent the full allotment of our 3-hour time limit in the Travel Lounge. My early morning stomach sucks, so I sipped water and ate some plain white toast while Sean engorged himself with coffee, various complimentary breakfast foods, and eventually some bacon. We leaned heavily in our oversized lounge chairs and waited for our connecting flight to Philly. Hours later we were in a rental Ford Explorer cruising westward on the PA turnpike, heading for a camp I’d not been to in over 15 years. 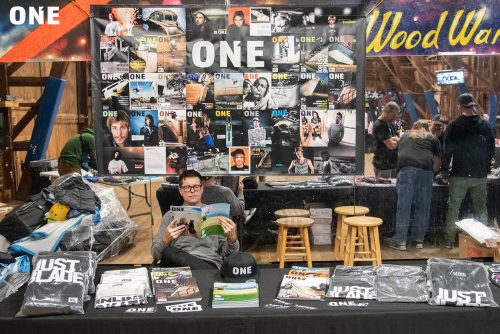 Exhausted from the long flight and 3-hour drive, Friday was kind of a blur until the trade show at 10pm in the Woodward barn. That’s where Sean snapped this as we prepped a table before doors opened. Despite being wiped out, it was great to spend a few hours slanging ONE gear and talking to friends, a lot of which we hadn’t seen in years. So that was awesome! 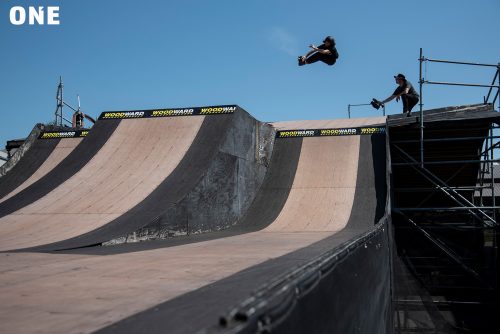 After dragging ourselves back to the hotel in State College once the trade show shut down at midnight, we made it back to camp around 10am on Saturday and settled in for a 12-hour day of filming of snapping pics. The first person we came across was Zack Pollak, and when we asked what he wanted to film he said “Mega.” So right off the bat we mounted the Mega and managed to start things off right. 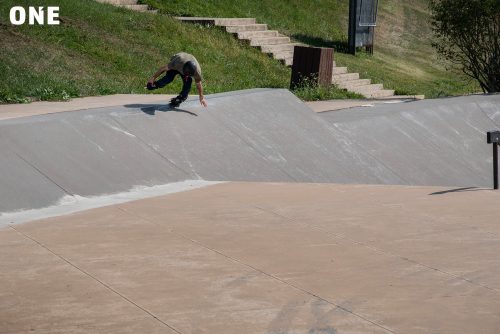 A recurring theme through the weekend was running into people you didn’t expect to see, but never seeing the skaters you thought you would. Running into Jeff was just like that, as I had no idea he’d be there. Right away we found some stuff to hit, and we can’t share some of the best yet. Sorry! 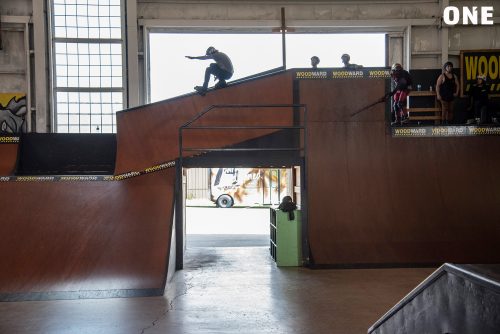 Before hitting the outdoor spots near Bud’s Barn, we headed into Lot 8 and that’s where we grabbed this quick session with Caleb Smith. Caleb is a legend in our books, as he’s the blader that traveled to Lagos, Nigeria to skate with Daniel Ogbogu, so we were excited to catch him shredding in person. Fast and powerful, Caleb made this launch to high soul grind look super fun. 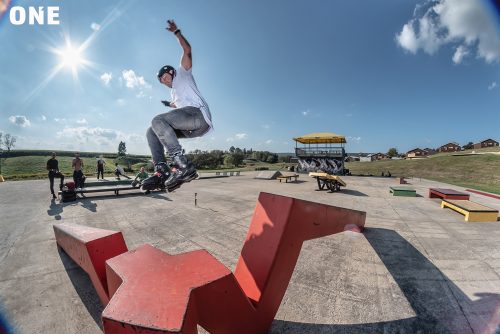 Last time Jeff Dalnas came to SD he brought along Matt Razz, so it was great to see the homie again, and super fun to watch him get this clip with Sean. Making his way up and then jumping to soul down another “leg” of the spider, Matt pulled this one off when I was busy a few feet away with Caleb. Bummed to miss the clip but stoked to know that he got it! 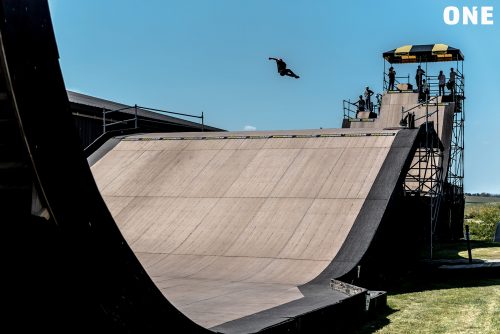 It was impossible to walk by the Mini Mega and not catch someone having a session. Chad Hornish was one of the bladers we’d made plans to skate with before getting to camp, and the first clips we got together started right here. Lacing a fakie 720 on the little part, Chad was quick to clip all the way up and throw a huge mute 360 on the big ramp. 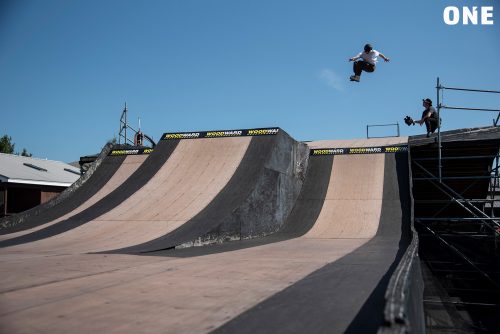 Collin Martin was learning 360s on the smaller extension while we were on the ramp, and Sean managed to capture him on this lofty hit. Collin did the spin very slowly, and standing on the launch deck you could hear him saying to himself loudly “slow 180… now fakie 180!” as he made his rotation over my head. 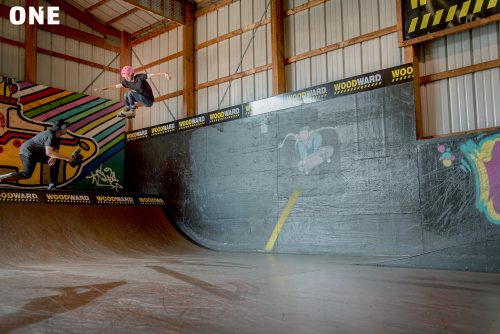 While most of the camp lunched, we stuffed a half Sheetz sandwich in Chad’s face and got back to work. This was a wacky maneuver that the video captures best. Lauch to soul on the wall, push back ao soul then 270 back into the quarter. What should have been “easy” turned out to be hard thanks to a dusty landing that kept making Chad wash out. We took the one we got. 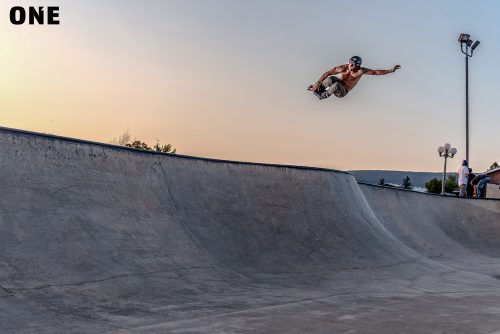 I guess the next couple spots must have been fire and I’m holding them for print, which means we’ve skipped an hour or two and now the sun is setting on a pretty incredible day. Sunset on The Rock with Kyle Sola and Ariel Surun was fun, and then getting to capture some moves from longtime NE Ohio legend Craig Parsons was even better. Here Craig boosts over the nipple after putting the coping through the paces with some grinds. 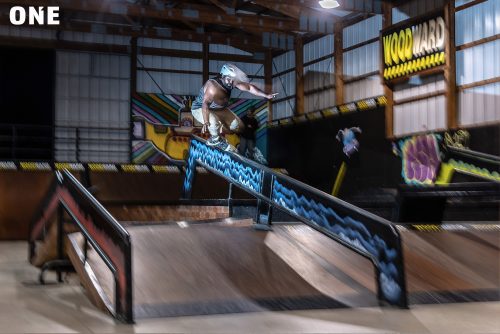 As the sun set and the outdoor light got flat, we moved the session back indoors to keep things going. We only had like a day to get as much content as we could! Back in The School we all witnessed Brandon Ford put on a clinic with the rail set up, and here Sean captured him doing kind grind up 360 out over the gator pit. 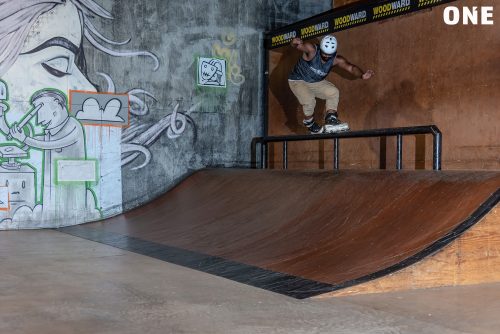 Mista Biff was on fire in The School, so we slapped the fisheye on the videocamera and had him get this alley-oop top acid 360 out. Once we’d gotten the clip, Sean asked Brandon for another one with me out of the frame. Can’t blame the guy! Biff was nice enough to accommodate. 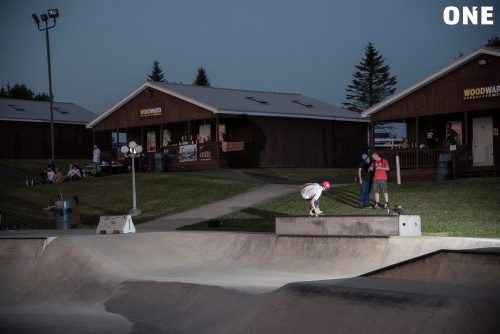 As we headed back to the top of the hill to check out Lot 8, the last light was hanging around The Rock, so we caught this line Chad was putting together. Quick backslide on the long coping, drop fakie into the bank, carve towards the sub box and hit the ao neg acid with a snappy rewind to forward. The late evening lighting made it nice and dramatic, with full darkness settling over camp a few minutes later. 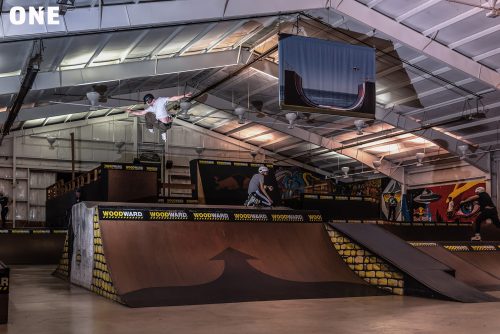 Lot 8 was slowing down as the whole camp started to wind down, but Mr. Coil Theory himself was still working his technique on the launch box, so we set up and captured a few moves including this steezy double shifty 180. I watch all of Collin’s skating aware that he’s cooking up new movements and ways of skating that will continue to influence what is possible on wheels. Pay attention! 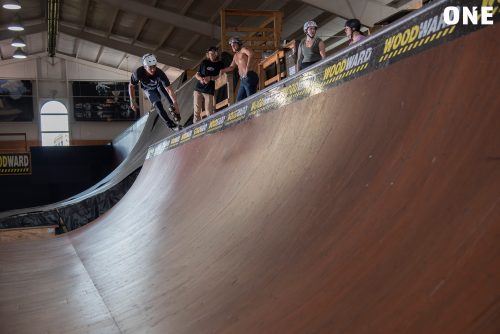 After another great night of trade show and another long drive back to our hotel — during which we scared a car full of bladers headed to Sheetz that thought we were the cops, we ended up in Cloud 9 for a morning session with our good buddy Metha. Mid-line, Sean managed to snap this stylish alley-oop fishbrain. When not doing cool things like this, Metha is doing even cooler stuff like organizing events for new blade kids in New York City. That’s a trick we really like! 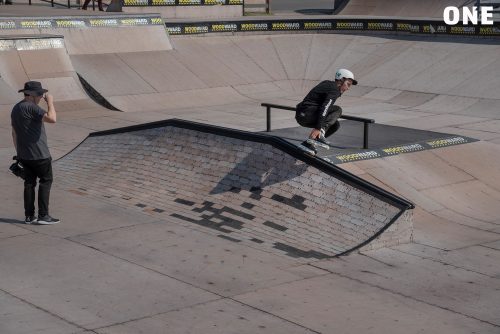 One of the last photos and sessions at camp, there’s worse ways to end an epic weekend than having a session with Jimmy Shuda. We were fortunate enough to snag a few pieces, this fishbrain to fakie being one, even though I’m totally not filming in the shot!

And that’s a wrap! Two and a half days. 600 bladers. Memories that will last a lifetime… or at least long enough to make you want to get back for next year’s event! Huge shout out to Woodward Camp, the Velasquez family, Cameron and Long, and everyone that made the trip, shared a laugh, and did their part to keep our community going. We’ll see you guys next time!

All photos by Sean Macgowan except the group shot — that’s from JE’s iPhone. lol