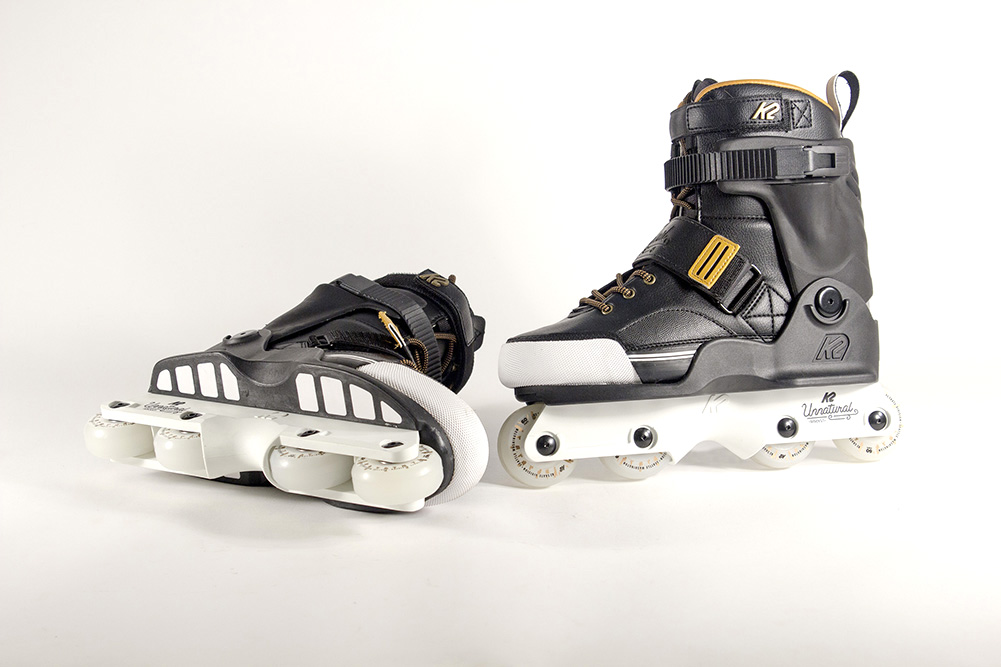 Back in the Blade Dark Ages there were skates. And they were good. And many tricks were done. But then came the K2 Fatty. And things were great. And many more tricks were done. Then something tragic happened — the fittingly named Nemesis. A misbegotten UFS monstrosity that was more a snowboard boot hybrid, future-styled exoskeleton sporting beast that was sadly the pro model that such legendary bladers as Pat Lennon and Eric Schrijn were awarded. I know, because I was in the middle of a tour when I sold a favorite pair of long-maintained Lievanos II boots for beer money after taking possession of the K2 Nemesis at Airborne skatepark. What all this rambling is to say is this: it’s been a long time since there was a skate offered from K2 that had the interest and positive feedback that the K2 Unnatural is experiencing. Now it’s time to talk about them some more. 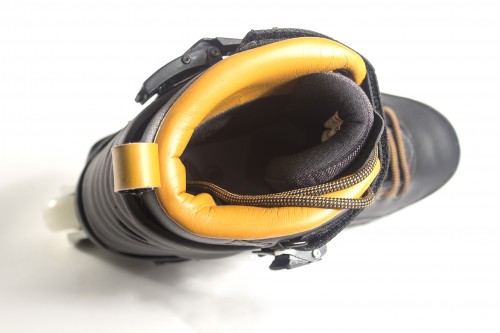 Look at that. Do you know what that is? That’s the quality and consistent manufacturing that a multi-billion dollar multi-national corporation brings to the table. #notkidding In a world of H&M and Top Shop the K2 Unnatural feels right at home in its faux leather accents and skin, but the look is both utilitarian and clean. Sure, it looks like a Vans. Okay, we said it. But hell, that Old Skool look is a classic American staple, and that itself is a skate shoe, so whatever — it’s like wearing shoes you can grind in. It’s light and the plastic feels sturdy, the soul plate is wide in a not overwhelming sort of way with deep grooves, and once on the foot those upgraded materials show their merits as we’ll get to below. I wear 10 Nikes and 27.5 Salomons or Flying Eagles or Rollerblades, but these size 9 Unnaturals are wide and roomy enough to do the trick.

Flat is all the rage in the wake of the great powerblading explosion, you know, when everyone remembered what it felt like to skate with eight wheels on the ground (very good). Some frames and frame companies and frame technologies have been developing to address these evolving tastes and K2 executes a masterstroke with their stock UFS frame in adopting the strengths of many frame concepts and distilling them into a simple, symmetrical, stiff, smooth-grinding piece of equipment. All while squeezing in four 61mm wheels if you feel like it, though the skates come with something different (see below). Of course K2 includes the hexagonal frame spacers, so although the frames are rockerable they do not have 8mm axles. If you have been on other blade sites maybe you’ve seen photos of the next generation grinder frames K2 is developing which allow larger wheels and have an even more exaggerated grinding surface. With their access to ski talent one can imagine a fast, smooth-skating frame with a big h-block becoming an attractive opportunity for skiers to explore. 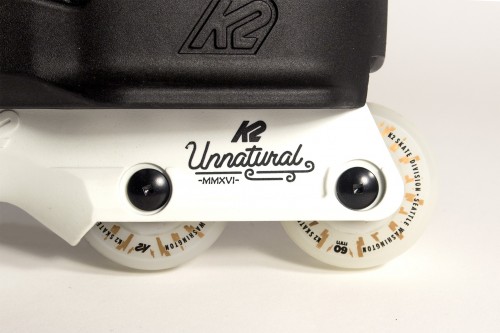 Stock wheels and bearings blow, right? Not the case here. K2 packs eight 60mm 88a wheels with their ABEC 5 bearings, and in what has to be an essentially meaningless and subjective statement, they were a hell of a lot better than I expected. Their wear was what should be described as “normal,” with them retaining their initial rebound for an acceptable number of sessions and though the cores dished out from the strain of this big body, they never exploded or chunked. If 10% the number of people that bought Fattys bought these and actually used them they’d probably skate more than once since a solid and fast flat rocker makes more sense than anti-rocker for luring new bodies into our ranks anyway. What we’re saying is that this setup delivers an acceptable roll right out of the box. 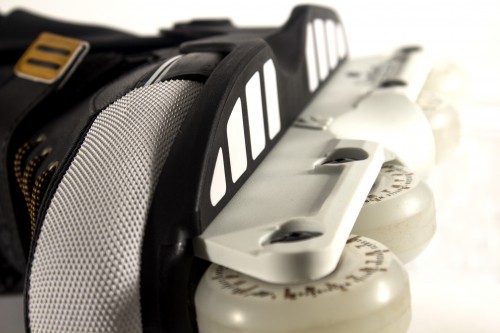 Here’s where the K2 really shines. Seeing as the boot is glued and screwed to this UFS soul plate that serves as the base of the whole operation, this thing is solid. And that solid feel translates into agile handling, despite the true-flat foot position that forgoes the “proper” forward lean for the feeling we all expect from K2. The shape is carefully tailored for balance both on front and backside boot tricks with a deep royale groove that when paired with the stock frame not only makes flat a viable grinder blading option for ledges but also provides a large sweet spot for balance and a gentle lock on. The whole thing comes across as very trim yet beefy, and well-balanced. The teflon inserts do what they do, plus they look badass in a Stormtrooper, inside the Death Star kinda way. So that’s cool. For those paying attention at home, they are a solid and marked improvement over their previous attempts at tackling the UFS system. Some people may complain about the glued-on boot, but like we said, it’s all very fit and tight because of it. 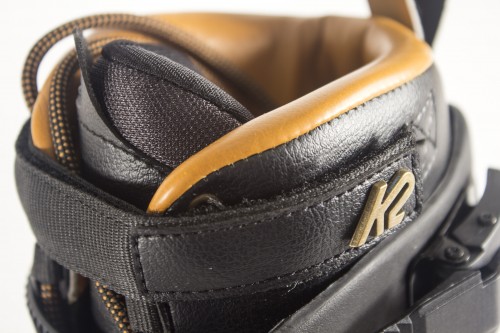 That little strap may look small and thin and not like much, but it’s one of the biggest changes that K2 added to these skates and it allows a level of control over the feel of the skates like you can’t imagine until you’ve tried. A small adjustment to these makes a big difference. Besides that you’ve got the aforementioned K2 build quality shining through here, with high-quality laces, faux leather accent and upper, plus a refined but tried and true cuff design that has truly stood the test of time. Details like the good laces and accents and slim profile add to the shoe-like quality that definitely draws looks from non-skaters on the streets and other action sports participants at the parks. Like every K2 cuff since forever the buckle has a bump for protection (which could be better), the beloved back-side gills, and matching accent pull tab at the back for getting these puppies on your feet, which looks good though better straps for carrying would be appreciated. 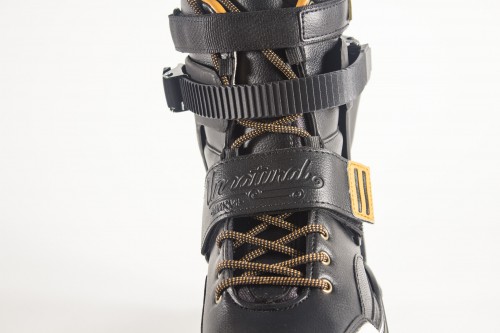 The Unnatural fits wide-ish and as such the instep strap is crucial for getting your heel locked in place, and the lacing needs to work well to let the soft boot technology really shine. If there is a weak point for the Unnatural I’d say this is it. The lacing system looks awesome, and the black leather too, but neither works particularly well when lacing up — it’s difficult to get the desired tightness without the laces slipping back to a looser state. Salomon had the locking eyelets that revolutionized the game, sneaker companies use plastic lace locks, and some other rec skates have done that too. If K2 could figure out a way to do that in the fourth lace eyelet area behind the instep strap, that would be amazing. Ironically (but usefully) the lacing in the vertical cuff area is great — the nylon loop eyelets are easy to adjust but also hold where you want them. I realize that sounds contradictory but they work. What can I say! The instep strap works pretty good though it would be even better if it wrapped around the bottom of the heel. As it is it feels like it’s sewn to the side of the upper, so there’s not a ton of leverage available. Though I’ve bitched these are still the most comfortable street skates I’ve put my feet in for a long time. Hours and hours at a time. It’s amazing!

K2 positions the Unnatural as their professional level offering and it delivers. Pairing the brand’s beloved shoe-blade style with modern materials and an innovative frame (with more on the way), it’s clear that someone flipped a switch on Vashon Island, WA, and somehow the K2 elves went from making a re-tread Fatty Pro (that Erick Garcia probably supported as a one-man skate devouring machine) and the unusual Varsity (Let’s make the skate look like a jacket jocks wear in high school!) to making an entirely new boot and soul plate and frame and even turned those innovations into a line of blades including the Unnatural and Front Street plus the more big wheel-minded Uptown or Midtown. With an easy fit and styling that feels at home in the streets, expect to see a lot more K2 setups at your local sessions.

We’ve said a whole lot about how fun these blades are and how they are well-made and an exciting offering on the blade market. All true! Go see for yourself, which is the most important bit of advice any review or write up about a pair of skates should say. Everyone has a different foot shape, or arch, or pressure points and stance or whatever that affects how things fit and feel. Comfort is paramount to just about anything else with performance the close if not overlapping priority, but you never know until you stick your foot into a pair and stand around in a store. So do that! Find a shop, try on a bunch of blades, and then buy the pair that is the most comfortable. Give your old pair to a friend or a kid at the skatepark, and enjoy your roll.

Have more questions? Leave them in the Comments and we’ll do our best to answer. Thanks!