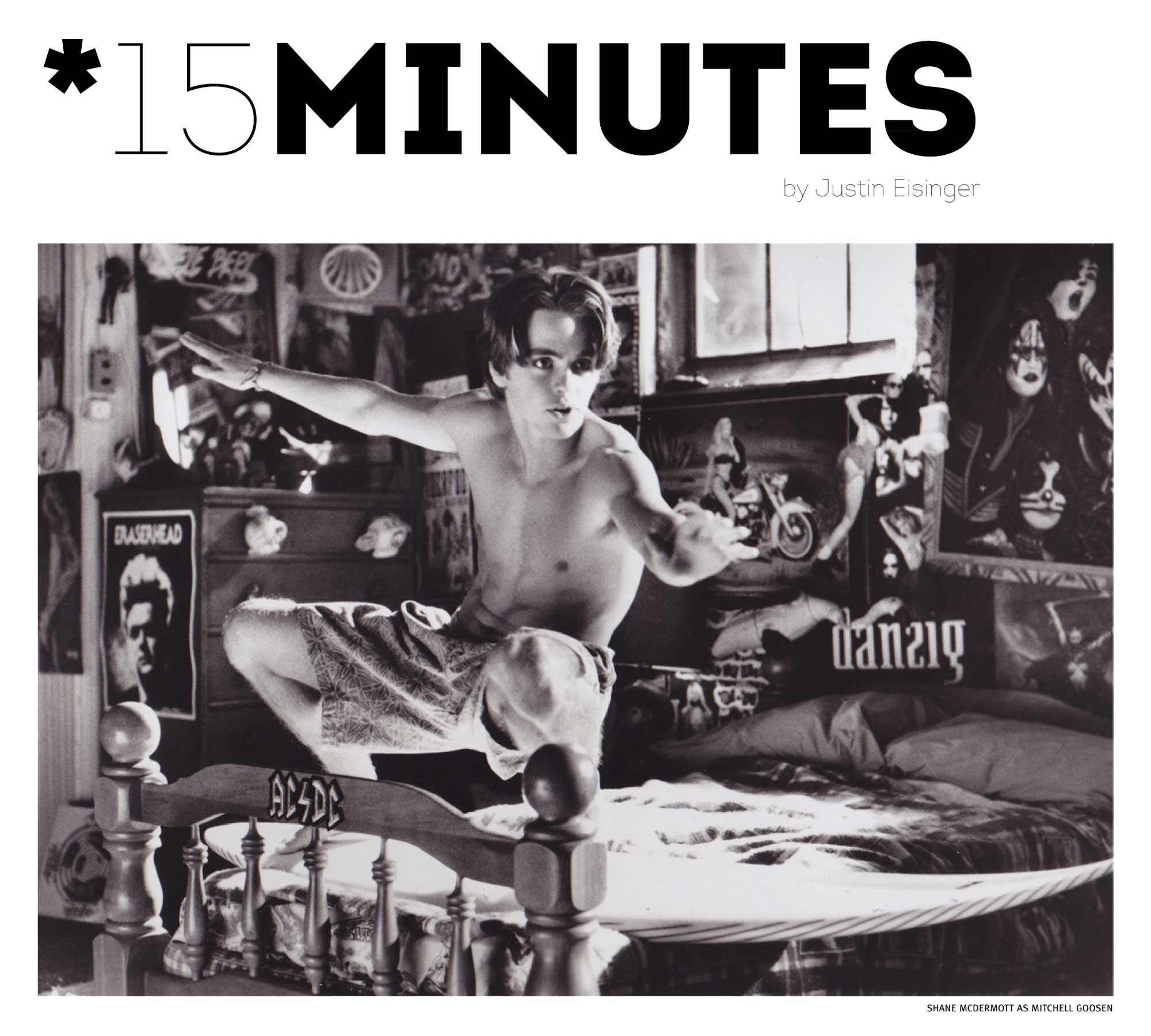 Sometime prior to 1993, Icon Production and Warner Bros. Pictures teamed up to spend $2,600,000 creating a comedy drama aimed at teen audiences. And 1993 was a busy year for movies. “Jurassic Park.” “Mrs. Doubtfire.” “The Fugitive.” “The Pelican Brief.” “Groundhog Day.” “Cool Runnings.” “The Nightmare Before Christmas.” Seriously, the list goes on and on. That same golden year of American cinema produced a film that would become near and dear to bladers the world over—”Airborne.” The story of a surfer turned Cincinnati transplant introduced audiences to the potential of aggressive inline skating, gave us a sneak peek at the talents of Jack Black and Seth Green, and introduced emerging die-hard bladers to a brand new folk hero — Mitchell Goosen.

Shane McDermott played Mitchell. This is his interview.

Shane, how excited were you to get cast in a big movie like “Airborne?”
Very excited! The experience was somewhat surreal… having a chance to work with Steve McEveety, Seth Green and Jack Black was an amazing opportunity.

Can you give us some context, too? Like how old you were, where you were living and how it all came together…
I was 16 years old, living in NYC, and rollerblading to auditions in the city streets.

What about when you found out the character was a rollerblader?
Since I spent many years skating the streets of NYC, it felt almost like the character of Mitchell Goosen was tailor-made for me. 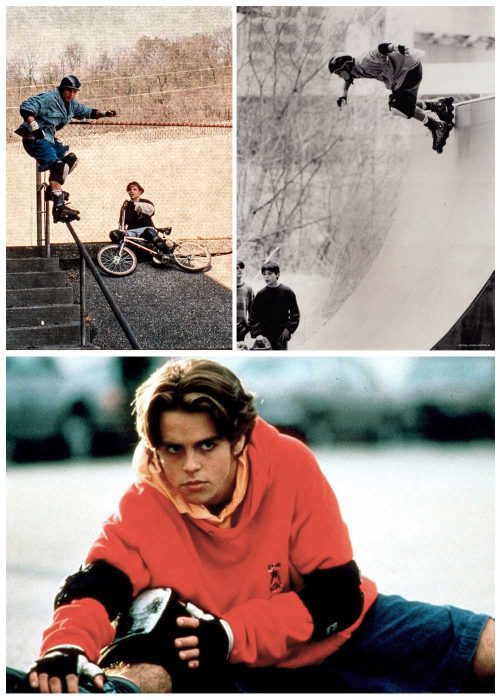 Seriously though, tell us about getting ready to play a character that’s near and dear to many bladers — Mitchell Goosen.
The character of Mitchell Goosen was a team effort; Steve McEveety (Executive Producer), Rob Bowman (Director) and most importantly, Bill Apablasa (the film’s writer), an all-around great guy, worked for weeks to create Mitchell. Mitchell is a character that I still work to emulate today.

When you got the call to do the film, had you ever bladed? What was your sports background at the time?
I was a gymnast at a young age, a sport that taught me how to take a fall, and started skating when I moved to NYC at age 13. So yes, I had blading experience. Looking back now, I am very happy to be alive to tell the stories. Although I was no match for Chris Edwards, the professional skater and stunt man who truly made Mitchell the skater he was in Airborne. Chris could y — it was truly amazing to watch him in action.

As filming started, what was it like on set? Obviously Jack Black and Seth Green went on to become household names — what were they like then?
Funny, gracious and pranksters at heart. To this day, I think Seth is the funniest man alive. He also possessed creativity and artistic talent that is very surprising.

The Godfather of aggressive inline skating, Chris Edwards, acted in the movie as Walt and was one of the stunt bladers. Do you recall spending any time with him?
Many hours… Chris was fearless, and never fell. If he did fall, you would not know it; he would simply turn it into a new move.

And how did stunts work — were there any you did yourself or did they always throw an “athlete” into the mix to do the dangerous stuff?
Chris would take on the dangerous stuff. My ability to skate helped make the stunts look more real. 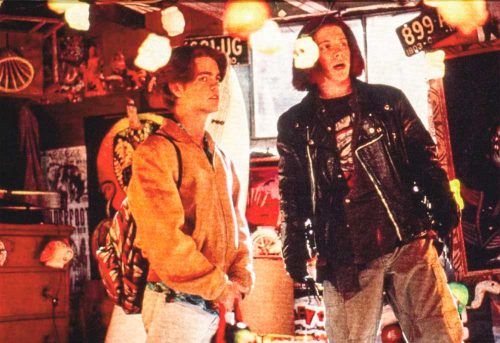 Which brings me to Devil’s Backbone; would you ever roll down that hill? I mean, I heard “the last guy who tried to walk down got so messed up he forgot who he was!”
Who am I…? Yes… I have many grand memories of Devil’s Backbone. I would not try it today.

Did anyone get messed up accidentally while filming the climax?
Yes… most of the time it was me.

I’ve focused on the blading but as an actor, what was the best scene for you?
When Mitchell meets Nikki… this was the first scene shot on set and was the scene Mitchell Goosen was realized. I remember every moment of that day… it was a great day.

When the movie released, what kinda reaction did it get?
Reaction was soft. Kids, who were the lm’s prime audience, had just gone back to school.

What kinda reaction did you get? Were you on your way to “Tiger Beat” teen pin-up status?
I had reached that status earlier in my acting career with Swan’s Crossing. Big hair, lots of BLING… I love Tiger Beat!

So what did come next?
School came next. I was still young and went back to school. After I graduated, I spent two years on All My Children, loving life, and then I discovered ART.

And eventually you ended up back in NYC tending bar. How was the change? Was it good to have less responsibility or was it more of a shitty feeling?
Waiting tables and bartending was great; it gave me the flexibility in my schedule to follow what I was most passionate about.

I was discussing this with some friends and they were like “Oh man, what a bummer” but I reminded them that you were a movie-star looking dude tending bar in NYC and that it couldn’t be all bad. Any truth to that?
I have been very lucky to live a most interesting life; I have been many places and done many things, and I’m only 37 years old. I look back on my time bartending as a fun time… a little crazy adventure that I would not trade for the world.

When was the last time anyone came out of a crowd and called you Mitchell?
It happens every couple months… Airborne’s cult status is a testament to its quality. A great cast, an amazing production team and a little magic is all it takes.

Yeah, guessing that doesn’t happen too often in Galveston, Texas. Did you really decide to move there based on proximity to surf and low cost of living?
Right on BRA! I do not surf as often as when I moved here many years ago… I am now a runner. Galveston has been good to me; I met my wonderful wife who is now pregnant with my rst child (Mitchell #2… Ha) and live a good life painting, selling real estate and being very active in local politics. I am currently running for the Navigation District and working aggressively to get young adults registered to vote. Something I recommend all your readers to do – GO VOTE. We need you guys to participate. 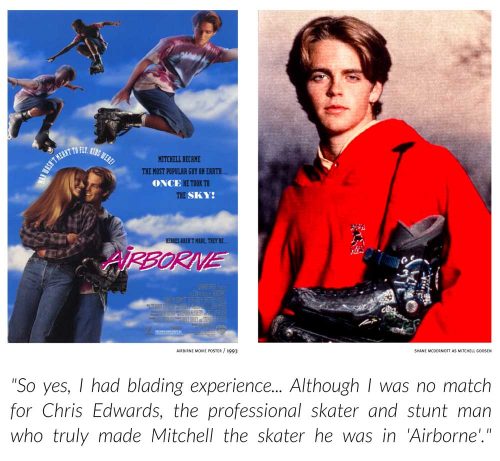 How about the last time you had on inline skates?
It has been some time.

My friend Mike Opalek did stunts on the lm and recalled one night years later when he went to a house party at some big spread in Holllywood. He said he was walking around the party, not doing much of anything, when he saw you sitting at a table in the backyard. He walked over, asked how Mitchell Goosen was doing, and said you kinda made this “Oh shit” face. Ha ha, but you two ended up talking once Mike made it clear he wasn’t out to give you a hard time.
If I remember right, I think MIKE helped me out… I was new to Hollywood and had taken a seat at a table. As it turns out, the chair was the seat of one of the band members of 311. Mike introduced me to the group telling them I was Mitchell Goosen… it was great. Tell Mike I said HELLO.

Have you ever thought “If I hadn’t done that stupid rollerblading movie, maybe I’d still be acting?” And I’m really serious because your lm career and blading’s position in culture seem to have followed a similar trajectory.
NEVER. Making a film of inspiration, a cult classic and all around good film was absolutely worth it. I love acting but may have been a little too young to appreciate the business side of the industry.

Well Shane we really appreciate you stumbling onto our website and taking the time to comment. That was amazing! But before we let you go, have any parting words (from Mitch or otherwise) that you’d like to share with our readers?
Thank you for loving Airborne and Mitchell Goosen asmuchasIdo.Itisyouwhomakethe lmwhatitistoday.I wish you all the best. Keep Skating!! Keep in touch and follow me on Instagram @sfmcdermott.