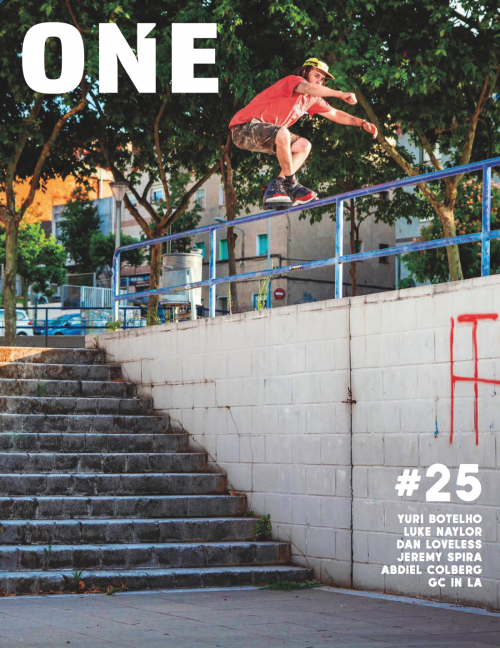 ONE Issue #25 just premiered at Winterclash 2020 where the world got its first glimpse of cover boy Yuri Botelho, photographed on location in Barcelona by UK -> Switzerland transplant Dean Bradley, topping an issue filled with a diverse cast of characters from all across the globe. There’s the Yuri interview, captured by Bradley and conducted by Miguel Uribe that sheds depth into the life of this longtime international standout talent, often underrepresented in western blade media. Sometimes things go wrong and turn out right, like when the Ground Control team hung out in Los Angeles to film after Blading Cup, but Jo Zenk injured himself and ended up taking a bunch of dope photos and making a cool travelogue of the whole experience featuring teammates Nils Jansons, Dominic Bruce, Yuto Goto, and Alex Burston. Beloved OG Abdiel Colberg gives an insightful interview to Miguel Ramos for a 15 Minutes that gives a quick history lesson about the roots of Puerto Rican street skating. Female blading powerhouse Chihiro Azuma earns herself the Am Hour, with a killer shot by Soichiro Kanashima and write up by Ken Kentaro. Brian Weis got some photos of himself in Portland captured by Brad Osantoski and shared a personal story about his time in the city, but he also took an incredible set of photos of fellow Detroit resident Luke Naylor for Luke’s breakout Spotlight interview. Jeremy Spira came to San Diego where Sean Macgowan captured a session that Jeff Stanger turned into a much-deserved profile written by James Kobryn. Sean also traveled to Woodward for second annual the What Year Is It? where the bucolic rolling hills and plentiful ramps inspired easy work capturing Jon Cooley, Jeff Dalnas, Jimmy Shuda and Caleb Smith. Then Arizona’s Chad Hornish shares the backstory on how he sessioned with Dustin Latimer, got hand-picked by Brian Shima for Nimh, and separated from Roces after achieving his dream of being on the team. Our man in the UK Sam Cooper worked with park-rat-turned-street-killer Dan Loveless to put together an inspired profile written up by longtime friends Rich Tayler and Ollie Jones. There’s also an interview with Solá Equipment’s Kyle Solá, a Take 5 with Dominic Bruce, and topless photos of Katy Perry thanks to a Grind feature on Shannon Rodgers. All in all, ONE Issue #25 surpasses even our own expectations… and you can order your copy now.

Buy your back issues HERE.