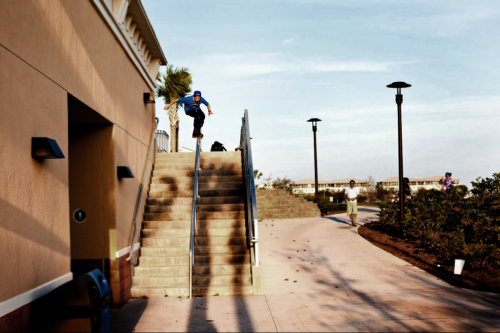 Josh Huels moved to Pensacola at the end of September, and almost every day since we have gone out and skated with the intention of getting clips or photos. The weather has taken a turn for the better, and there is a small window of time to enjoy it. This particular park is located right on the water and is actually only a few months old altogether. Along with this rail there are an array of ledges, kink rails, mushroom spots, and metal power boxes scattered along the way.

Josh and I parked and skated over to another new spot — he wanted to warm up and film a gap to soul on a quick down ledge next to a rail. Lacing the clip first try and then nailing a few more for filming’s sake, we continued across the field to the fresh 18-stair rail at the stadium. A little intimidated, Josh attempted the trick a few times to get the jitters out of the way. I quickly setup one camera at the top of the stairs to film and ran down to get in position for the photo. Four or five tries later he laced the soul and gave me a high five as he rolled past. Mission Complete!

This was shot with a Canon 5D markII on a 50mm.