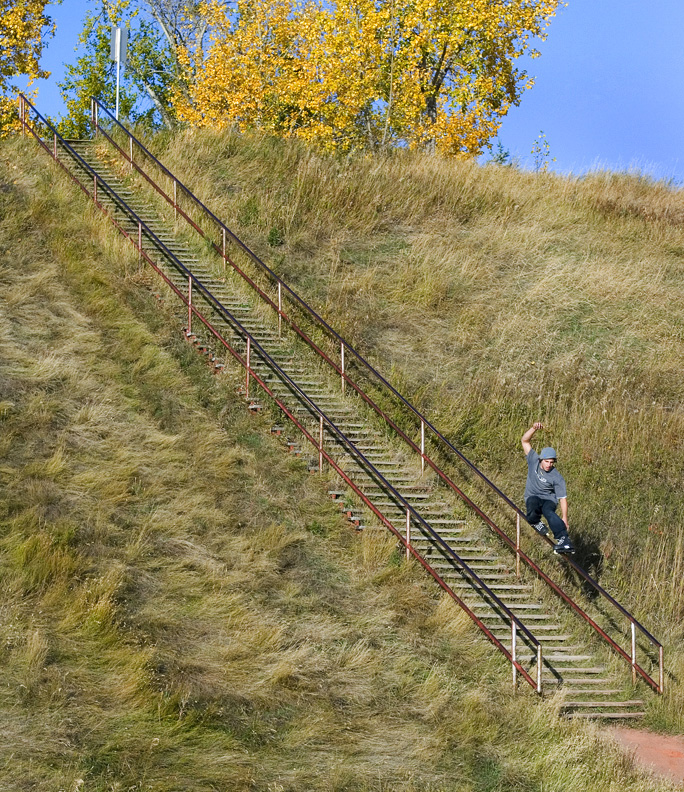 Our Canadian photo correspondent Chris Wedman has been getting out and about with his local blade crew, and recently sent us a couple shots from their fall sessions in Calgary. One day they ended up at an 85-stair rail…

With summer gone and fall in full force, the city of Calgary descends into shades of yellow, orange and brown. Calgary is at the edge of the Canadian praries and the start of the Rocky Mountains. The result is a city with a town of giant rolling hills and monster long rails. This 85-stair beast happens to be one of them.

Like most sessions there’s never a real plan aside from: find spot, shoot it. We finished up shooting at one of the local schools when somebody mentioned a giant rail not far away that might be “photo worthy.”

When we arrived I didn’t even bother taking out the camera. I didn’t believe anyone had a hope in hell of landing it. The rail was so long and the landing was a terrible mixture of dirt and shale. But my doubt was soon cast aside as the boys started throwing themselves at it. I ran to the vehicle and grabbed my trusty Canon w/ the 24-105mm attached and found a spot as far back as I could go near the bottom of the rail.

Many of the young bucks stepped up to show their skills only to be thrown into the grass or down the wooden stairs in defeat. 29-year-old Kenny Talpa showed the beast no mercy, and on his third try nailed a topsoul all the way off the end.

Kenny, that topsoul is dope!

amazing kenny hitting hammers like your 16 again . that was a good day until you castrated yourself on the green curve rail. amazing photo and trick kt and good photo taking weedy RPT what calgary Alberta

thanks chris, you rule

nice work chris, the light gets really pretty this time of year, good to see you are taking advantage of it!

Good, job Kenny, and Wedman. The photo came out great! This is very rad.

SICK dudes! hey wedman, are u using all natural light with that? lighting looks perfect

sooo pimp……………still holding it down!