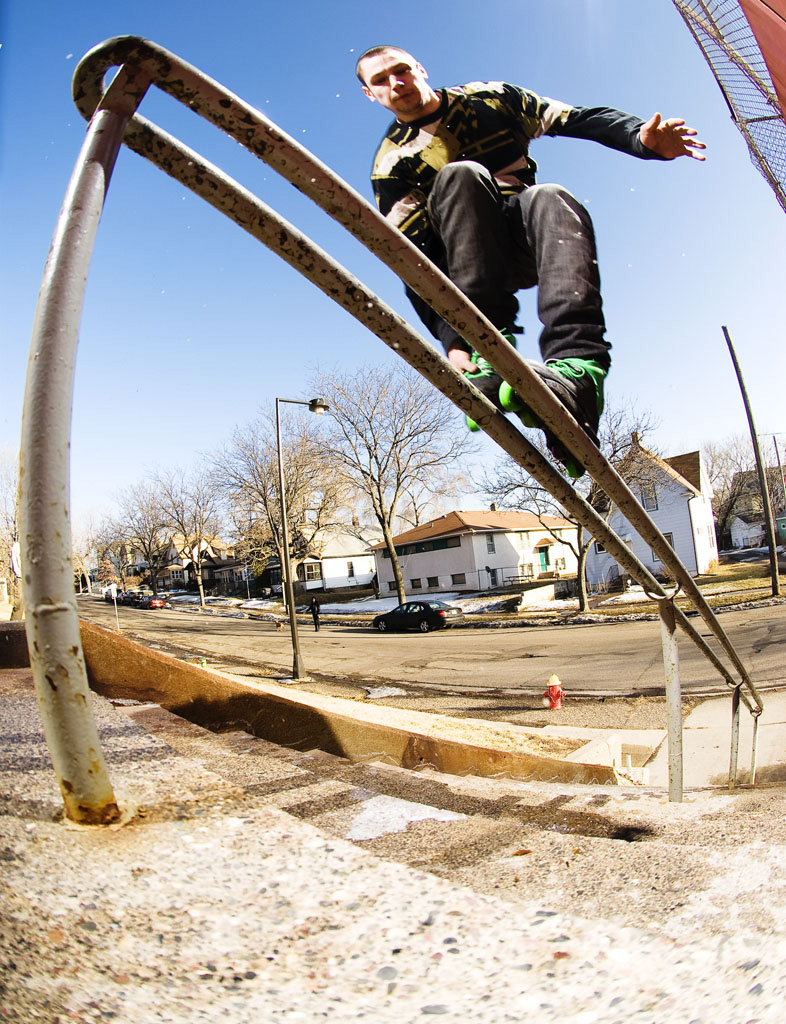 This Jeph Howard photo is something we shot this spring and just never found its way into the pages of ONE even though it’s totally nasty. The conditions were great — open shade with enough ambient light to focus on just lighting Jeph and knowing the spot would still be well exposed. The trick is AO Makio, which is really, really insane to do on the inside so I wanted to be very clear about the nature of this beast rail. A fisheye when used correctly can really exaggerate aspects of a scene. In this case I wanted the first support very distorted and pointing in to the frame, which meant (as it frequently does) being scary close. This is when experience comes in to play. Not only do you not want your piece getting smashed but you also don’t want the skater to be unable to do their trick ’cause you are laying on the stairs. Finding out how close is too close can be an expensive operation, but unless you are retarded-close there is really no point putting your fisheye on in the first place. I framed up on a few practice runs, which consisted of Jeph jumping over the rail, and found a place where he could skate but still showed the double rail perfectly, and we went to work. Lighting is a light straight on from the end of the rail about eye level and very close. The other is boomed to the fence using Manfrotto grip clamps; also very close. It’s important to have your lights close to your subject during the day to be able to freeze the action (turning your lights down means a faster flash duration, thus more stopping power). The flecks are water droplets kicked up by Jeph’s skates from the melting snow everywhere. And yes, that is Chris Farmer in the background watching for cars. Safety first. — John Haynes

Alright, but, is it just me or did nobody else notice the intensity of this shot and grind. First of all, props John on the skater selection. Im not too keen on hyping up unknown Joe Shmoes with less talent and less chance of anybody noticing our sport. Thanks.