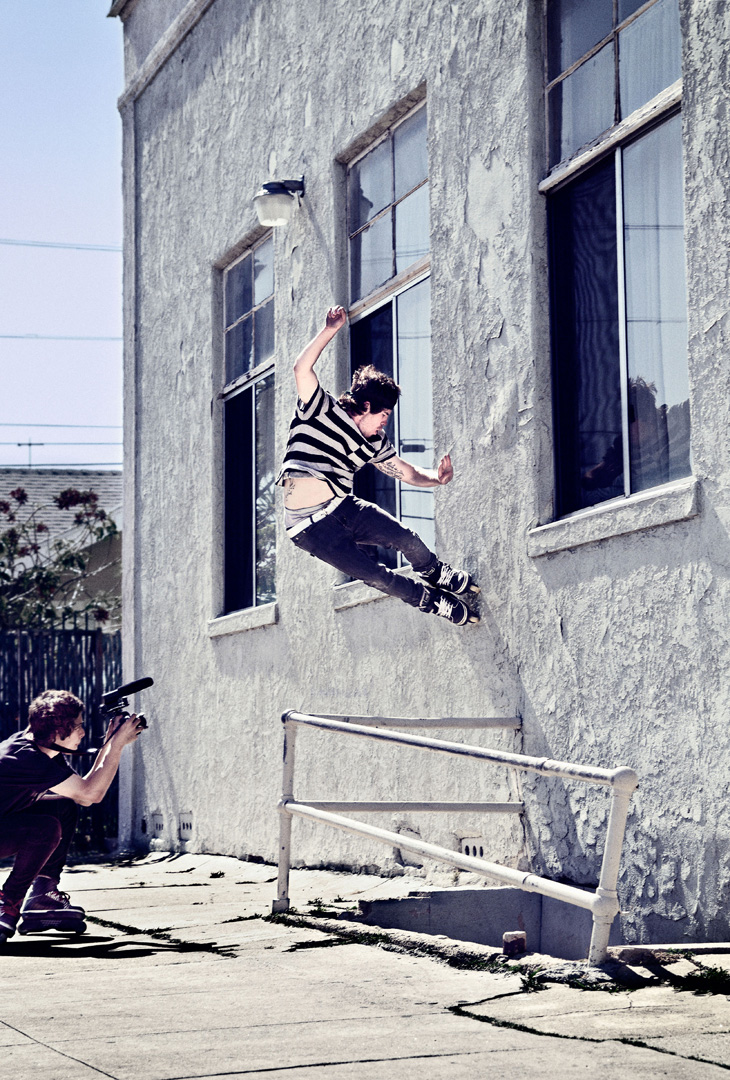 It’s was Saturday afternoon in Long Beach, California. I went to skate with my buddies Gregory Preston and Anthony Gallagos, to see what spots Long Beach had to offer. I met up with them downtown and to my surprise, Dylan Davis and Mike Dempsy were there, too. We went to a church with a painted stair set you can grind across, and a strangely-placed rail with a stairwell that leads into dirt. Mike tinkered with a few tricks but ultimately decided on backside royale to inspin 180 wallride. He’s filming for his latest video, “Lunch,” so he was trying to get the trick just right. It worked out for me since it gave me time to figure out the shot. It was a tough spot to setup for, with the church reflecting the unadulterated midday sun. I thought about strobes for half a second, but it was already bright. Even at full blast, the two speedlites I had on me wouldn’t be able to surpass the blinding sun. That’s fine, why complicate things, right? Another problem I had was with timing. Either catching Mike too early or too late on the wall. I wanted both feet on but it wasn’t happening. Anthony made the suggestion of shooting it as a sequence, which was brilliant! The 7D shoots 8 frames a second, capping out at 20-25 frames, which was plenty for the trick. I shot 4-5 sequence shots; the last set I thought was the IT shot. Mike had one more try in him, so I thought why not try a single shot since I figured I had the timing down from the sequences. Mike went and I hit the trigger. Picture perfect. I knew then and there that it was the shot. Canon 7D, Tamron 17-50mm. 1/400th sec, f/4.5, iso 100.

so… backside royale to truespin wallride?

sick trick, i like the photo too. perhaps deserved an angle more to the right in my opinion though

work of the god’s

The body position of the wallride looks awkward to me. Plus the building wall is crooked, but thats not a big deal.

we need to get a skate sess in sometime in the future, it’s been too long.

Damn! The colors, lighting and detail look so good! Check out his hand, it’s saying “eff you wall! I will not touch you!” haha!

So sick, I kind of like the camera lurker, sometimes they add to the photo, you know there’s going to be a sick clip and it’s cool to see people out shooting, filming and skating together.

Long Beach is so nice, next time I’m down lets meet up!