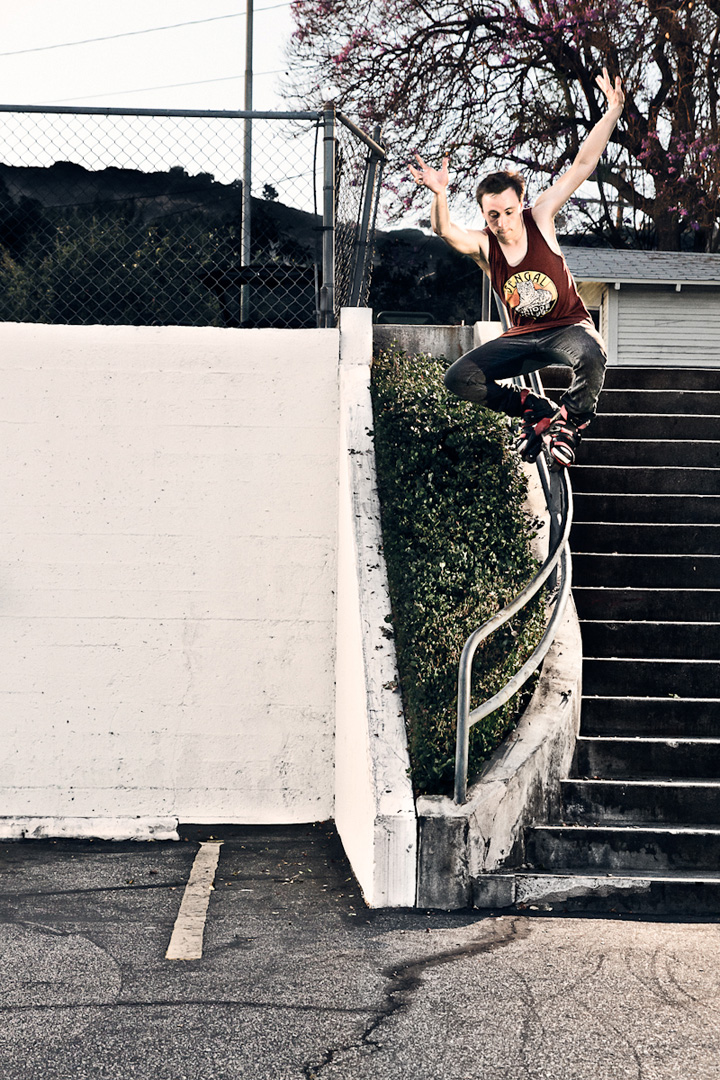 It’s a Sunday afternoon, there are three cars of bladers and no clue where to skate. We ended up at the new skate plaza in East LA, but were at a loss for ideas after that. Turns out I left my camera bag at Abel’s place after picking him up in Eagle Rock, so I had to backtrack with two cars following me. We ended up eating while trying to figure out spots. As luck would have it, we were near some low handicap rails in the area we’ve been meaning to check out for a while. On the way, we came across these down rails. You might recognize them from Alex Broskow’s “Drip Drop” section — he backslides the entire thing through the curve. Let me say it is far more daunting in person. It’s steep, fast and the bushes have thorns. That doesn’t stop Anthony Gallegos. He laces half cab fish and Half Cab Top Mistrial through the curve. Though it took me more than a few tries to get the timing right since he was flying down the rail. He was patient and consistent, two great assets while trying to photograph a rollerblader. He still killed it at the next spot, but that’s another story completely. Canon 7d, Tamron 17-50mm, Nikon sb-25 up top at full power, and sb-24 down below at half power; 1/500, f/5.6, iso 640.

Really sick lighting Jonathan. I think you could have chosen a better angle though. It would be nice to see the whole rail.

Cool shot, I like the angle though not being so straight on may be nice, try shooting earlier though. your boy is hunkering down to take the curve, which is cool because you know he will land it, but its definitely not the most sexy looking part of the trick. I have shot things like this before and I usually request that they do it again, and if you shoot earlier rather than later it should be easy for the blader because they dont have to do the whole rail

Well i definitely like the shot…the trick was sick and the photo does it justice. Personally jon i still prefer the fish but this a nice shot. I really like it when the photo is taken late as it shows that the whole rail has been done. But of course there are exceptions to that rule too.

It’s so fucking cool that there’s intelligent discussion about these PHOTO JOURNALS!

Skaters seem to hold to a strict honor code on what photos see the light of day (print/internet). When I see ANY photo published anywhere I assume they did the trick. At least thats the standard my editors hold me to (without even asking) and you have no idea how many badass photos are collecting dust on my hard drives because the trick was not landed.

I have no doubt that you will be skating for a photog soon! I really like how thought out your reply was, its refreshing to see that on the internet!

A few steps to the left would have made the angle and the trick look a little better, but the exposure and shopping done to this are great.

As far as photos go, if the skater lands the trick, I use whatever shot looks best, even if they didn’t land it on that attempt.

I suppose I should chime in even though I feel a little awkward doing so. Thank you John for the input. I admire your photography quite a bit, so I appreciate you writing your thoughts down. I was originally aiming to get him through the curve, but it got trigger happy early. I agree on the assumption that skater has landed the trick, but I like the doubly verification in a photo if at all possible. It is just a nasty rail in person and I wanted to convey the difficultly in the photo. There was actually a couple photos that were earlier and later but the body positioning wasn’t right. I only had a few shots anyway since it was getting too dark to see the rail. But I will keep your words in mind the next time I’m out!

And Dan, I completely agree that I should have been a few steps to the left, but I didn’t have a chance to move my flashes accordingly. It bothers me a lot if my lights are in the shot. I wasn’t keen on his body blockading the top half of the rail, but it seemed a shame to let this photo wither in the archives just because of that.

This “critique” (which congrats by the way, its the first seriously constructive critique ever on the internets) is like all critiques in that we were not out there in the sun with bladers doing badass moves. you were out there, a few steps to the left (moving to the left would actually minimize the curve in the rail) or a few steps to the right or later or earlier in the trick are super easy to say now. The cool thing, and quite frankly the only thing that really matters is that you were out there, shooting photos, shooting too early or too late or from such and such an angle with such and such a lens. making mistakes and having success and most importantly, learning lessons so that next time, the things that stand in the way of your photo and the cover are only political or arbitrary.

Once you master (no one will ever TRUELY master) the technical side of doing what we do, you can start to really focus on creating something that is truly yours. You are working on that, as am I. You are on the right path.

Nice shot! I’m an amateur photographer, and I was wondering what you used to get that grainy-looking effect. I love the way it looks with the concrete and the rail and I would like to be able to use similar effects in some of my shots.

Hoang Phung in spin 360 souled on the same side in resurrection I think. Scary rail there in eagle rock