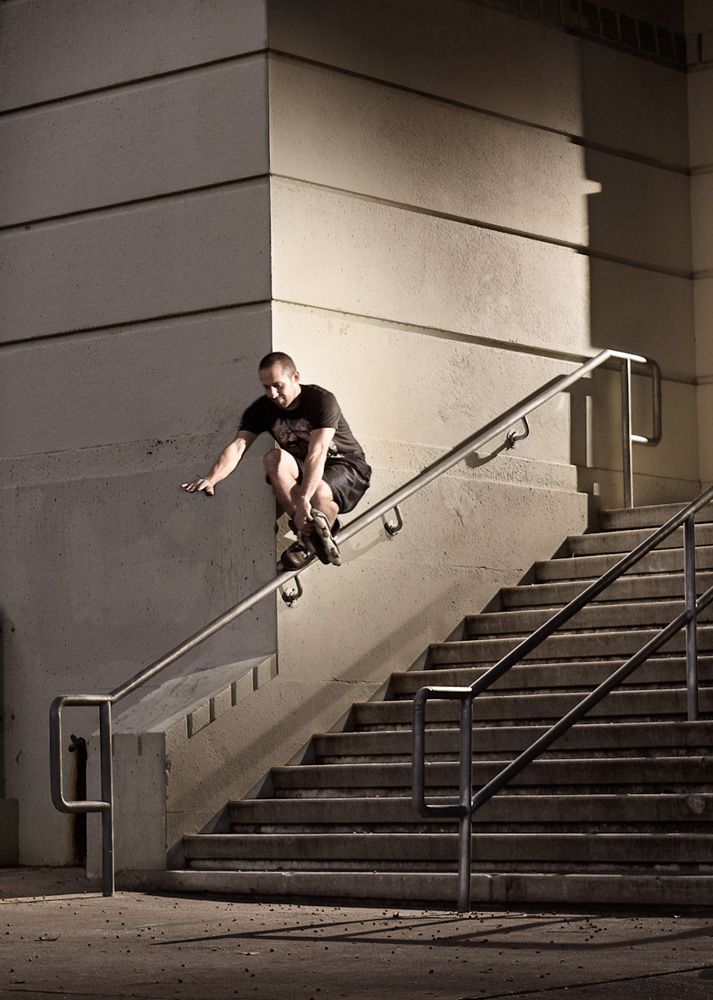 It was one of the first Sundays in weeks that wasn’t overcast or rainy, as we’d had three straight soggy Sundays in a row. For Los Angeles, a month of this kind of weather is an eternity. So, with the weather clear, I met up with the usual suspects (Jeremy, Abel, Cydney, Steve Cortez) and one not so usual suspect, Danny Rosado.

I get to blade with Danny every so often, but each time he leaves me dumbfounded. On this occasion we ended up at a school I had found on one of my late night detour trips home, looking for spots. Turns out it had been in a Xsjado edit recently. We know this from running into JC, Stockwell, Farmer and Garlinghouse turning the corner. They ended up hopping inside the school to film while we stayed on the outside.

The rail is steeper than it looked at first glance, which led to some interesting tricks. Danny decided on a line with Fishbrain on the ledge at the top of the stairs and Switch Crossgrab Fishbrain down the wall rail. He landed it second try, but luckily for me he agreed to try it again for the camera. During one of the attempts school police came by and kicked us out, but not before telling us they were there because they got a call about musicians hopping into the school with their instruments. Guess they thought there was a party going on inside or something. This shot was captured with a Canon 7D, Canon 28-70mm, at 1/200, f/5, iso 160. One sb-24 was high and behind Danny, and one 580ex was high and right of Danny on a 1/8″ grid.