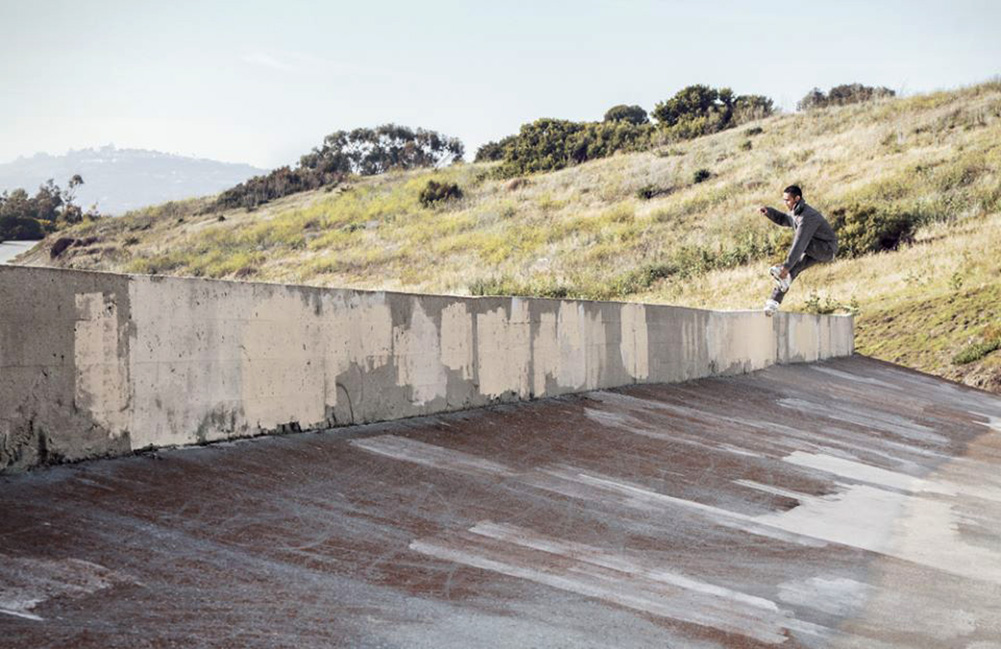 It’s been a while since Obe and I shot together. Our conflicting schedules make it near impossible. There was a lucky break one weekend, with both of us jumping onboard without hesitation. He picked the spot — a park overlooking the Pacific ocean in San Pedro, California. It was an absolutely stunning view of a glistening sea, with kelp forests swaying underneath the waves.

Mike has an aesthetic eye when spot hunting. He seems to look at the surroundings of a spot and how it will lend itself to the trick. It never is just about the trick difficulty or the obstacle itself. I appreciate this greatly when shooting him because that is always half the battle when photographing a spot. You ask yourself, “How do I make both the trick and the spot look the best it can?” It makes for a nice duo when both parties are thinking about the final photograph.

Anyway, we’re at the spot and we pop out of his truck to trek down a long path, leading down a hillside that stares into the reflecting, endless sea. I’m asking myself what kind of spot could be down this pathway? We stumble up to this strange ledge with an angled roll up. I noticed later on that it was actuality a cemented roof in the middle of a hill. Why it was here was beyond me. My guess is it was an old gun range. The concrete felt as rough as sandstone. We spent hours rub bricking and waxing a section of it, testing it, and getting stuck each time. This ledge was stealing our souls one quasi-grind at a time. However, the view onto the hillside would make this photo worth it.

Eventually it started to slide well enough that I popped out my camera. I had a new lens to test out, a 28-70mm, so that went on the body. I tried to capture the ocean and the barrack from the hillside, but without much luck. Obe disappeared as a speck in the vast oceanic drift. I tried from the side and close up, which lost how lengthy this structure was. I then shot from behind, which worked out the best because of the pleasing line that leads you straight to Mike (didn’t hurt that true makio looks great from that angle). The lighting needed a bit of pop, so I rigged a flash off-camera from down low and to the right.

It took a dozen shots overall to snap this one shot, with the result more than worth it.