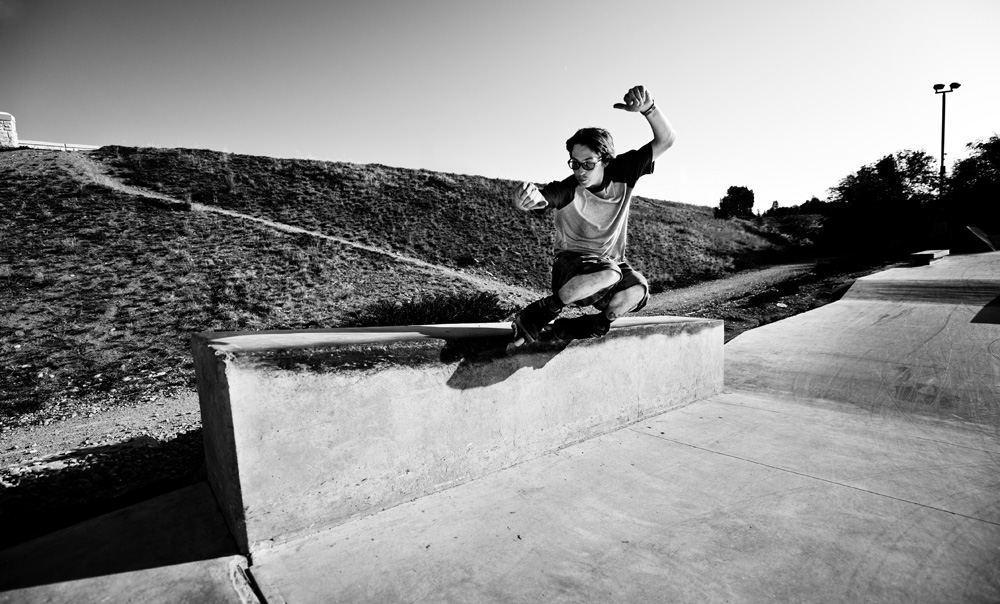 This was our first day of shooting. I had just moved back up to Missoula, MT, and had only been in town a couple days. It was good to see the old crew — with one new face, Brandon Mateer, who had moved up here five months ago. We all met up and started sessioning the park. Brandon asked if I wanted to shoot a topsoul up a ledge, so I grabbed my 14-24mm lens and threw it on. Shooting with such a wide angle means that you are right in there. You are able to see the skater’s facial expressions, but can also get the entire trick and landing in the frame. I took a quick meter reading and set it to f/2.8 with a shutter speed of 1/3000 at ISO 200. I focused on the part of the ledge that I thought Brandon would be most steezed out at. I released the shutter when he reached my focus point and quickly jumped out of the way as he flew by. When I looked at this photo on the computer, Brandon just happened to be wearing the perfect shirt to separate him from the background, so I instantly turned it black and white. To finish the photo, I used burning and dodging in order to direct the viewer’s eye, which is key for me when I use natural light. — Josh Hayes

This is a sick shot. What makes this sick is that this is in MT. I’m just glad to see and hear about more rollin in the big sky. Cuz not many ppl give props to any MT roller. But with the help of our local photoGs n rollers we will get them seen. Anyone down for a session in helena MT hit me up (four0six)461-5964

such a nice photo! mateer, you gotta get in touch with me!

if you’re in missoula, i’m only 3 hours north. been too long since we rolled, send me an email seanmknight@hotmail.com

Well, I must say I like your style, Josh. U gotta good thing going and u gotta keep up the hard work and maybe buy a video camera(if u dont already own one.) Aight, thats my word, word.