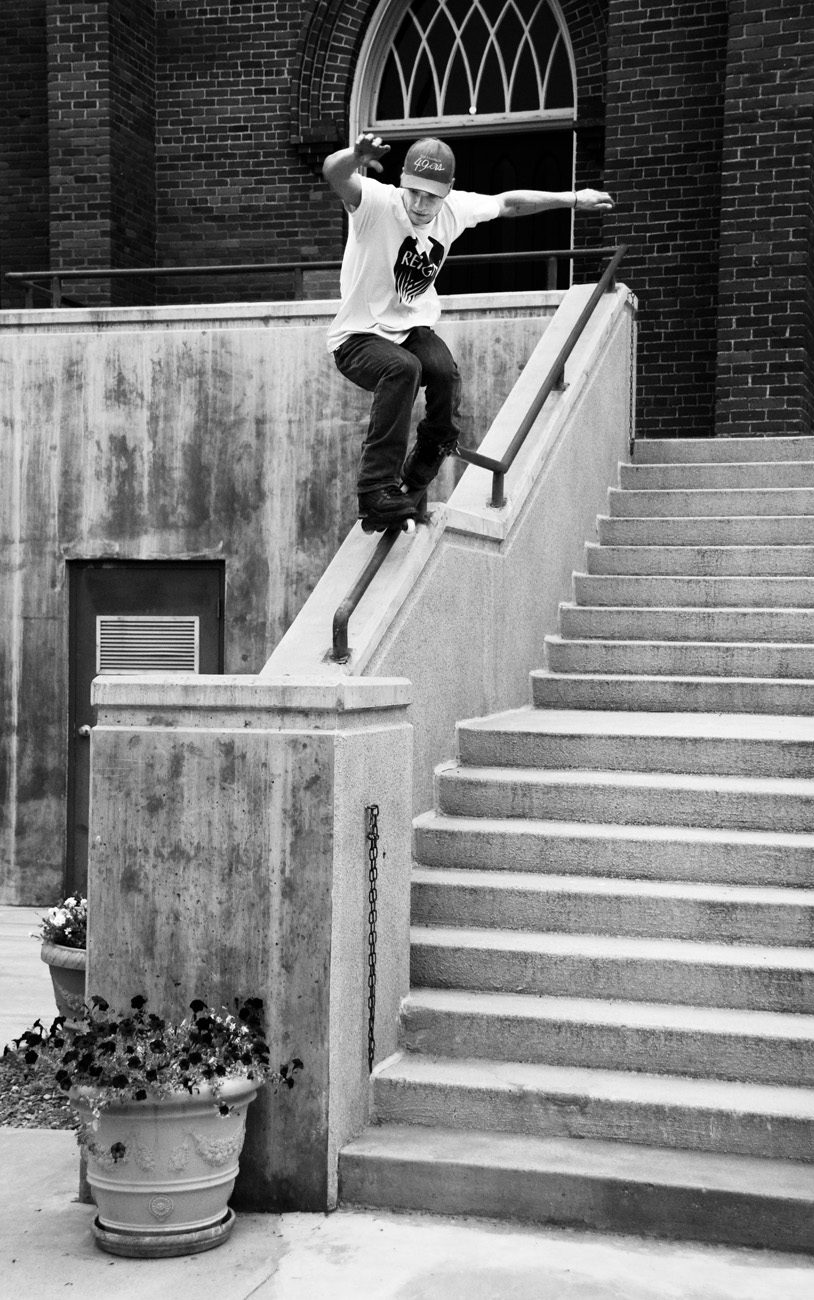 Cameron Talbott, Howie Bennett, and myself decided to make a trip to middle-of-nowhere, MT, which consists of some cows, a grocery store and one church. We were headed there to check out a new concrete skate park that we had heard was small, but free, and very good. After having a good session at the park — which lived up to our expectations — we spotted the church and what appeared to be a really sick kinked rail. We skated over to it and Cameron immediately walked to the top of the stairs and said, “Do you want to get a photo of this?” “You bet,” I replied. It seemed to be an easy shot at first. However, when I looked at the different angles from which to take the photo, they did not show all of the challenging aspects of the trick. I moved back and zoomed to 35mm, which allowed me to show the big drop on one side and also what Cameron was going to have to gap off of from his topsoul at the end of the rail. I set the exposure to f/4.5 at 1/400 of a second (ISO 320). I told him I was ready and he laced it. — Josh Hayes

What a great shot, John! Cameron Talbot representing? Whaaaaaat? I thought this dude was long gone from the blade scene.

I remember him from old school NISS competitions or something but that name is old school like myself, Ed Rendell(ex Governor of Pennsylvania.)

So now that my respect has been paid to the legend Cameron, I must present you with another issue. I live in Philadelphia, home of Denial, Dub Caesar, the Kelso’s, Neglected Truth and all of the rest of you who have given our city such a great name.

Philadelphia’s impeccable reputation in the rollerblading community means nothing considering the current state of our scene. In my opinion, rollerblading has died in Philadelphia and it will not recover unless we start getting back to the business of the Illadelph style of business.

In order to understand what I mean u must watch this section of the legend Jimmy Shuda: http://www.youtube.com/watch?v=tyqFsRzQ1kI

Ooops, did I say ex-Governor of Pennsylvania? Haha, as current Governor of the Commonwealth of such a large state even I make mistakes. Now that Im taking the time to write in again I must address the main point I am pushing with my comment. Philly Stand Up!!! Time for rollerblading in Philadelphia to make some changes. In the words of my man, Beanie Siegel, “either you gone get down or lay down and if you lay down you stay down.”