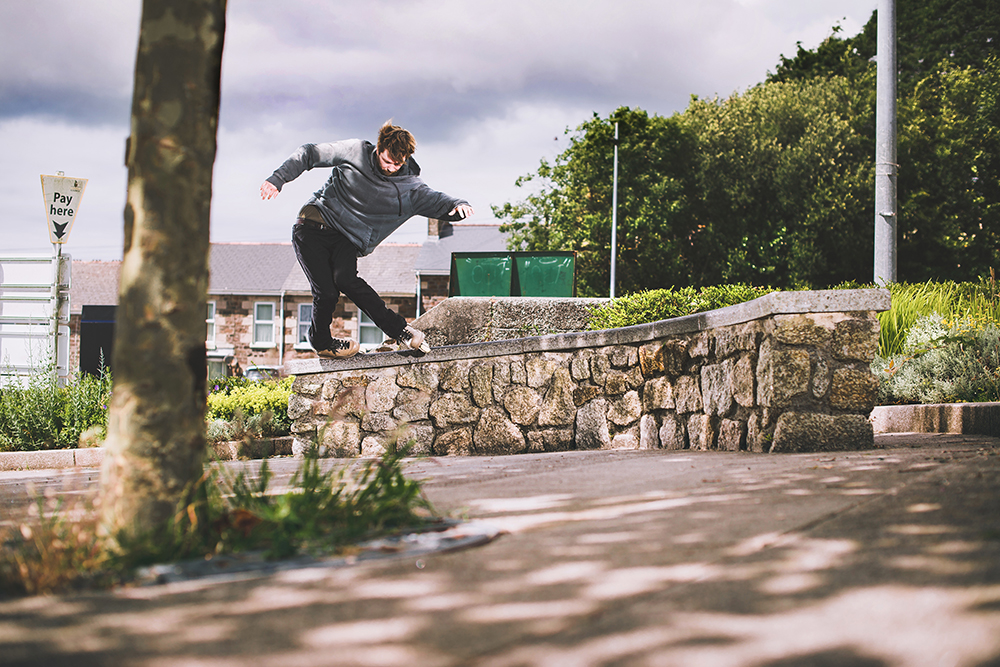 A little mid-week jaunt down into Devon and beyond was in the cards, all in aid of cracking on a new project featuring Billy Murton. It was the late addition of Matt Smith that turned the business blading mission into more of a road trip with the boys. July was treating us all the finest summer weather the UK could muster, and with one spot to the good and many more to go we headed into Redruth for two of Cornwall’s more infamous spots.

For Smith, this was his planned warm up spot for the day, being one of his favorites in this region. After some time reacquainting himself with the ledge, and a few beautifully laced True Top Souls, Smith gleefully announced that he was warmed up. I hastily set up for the shot while Smith, for some reason, decided he would put on a heavy oversized hoody.

I will never truly understand why that boy does some of the things he chooses to do. In this instant his odd timing in when to don what, I’m guessing, is a recent and favorite garment purchase, meant he was not only boiling hot, but it also resulted in him having to do the trick multiple times to get the perfect shot.

This was because the oversized hoody was laying oddly some times, making his shape look really weird. Much alike the famed leather jacket, I will always allow for Smith’s oddities for three good reasons. For one, he is a seriously great dude, his skating is bloody pretty and, lastly, they make for some great material when it comes to story time with the lads. This one’s for the high street Smith! — Sam Cooper