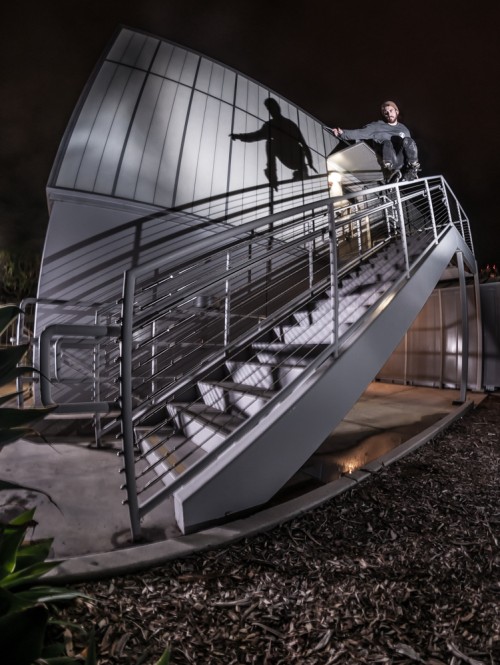 I was pretty excited when Josh Tolle hit me up about going out and shooting pictures. I had skated park with Josh a couple of times before and knew he ripped, but I was curious to see how he would be out in the streets. Josh came down from North County with Alex Wick, and we decided to cruise around City College for some spots. This drop rail ended up being the first spot we checked out. Josh had been talking about doing something close to a hammer, so Alex decided to show him this rail right off the start. Josh gave the rail a good look over, and decided we would stop here on our way back. I didn’t think there was any chance we were going to come back, but sure enough at the end of the session Josh was all for it. At first I wanted to get a long lens shot of this rail because the San Diego skyline was in the background. But every test shot I took just didn’t turn how I was picturing it in my head. So I decided to try out the fisheye and see what would happen. After a couple of test shots I was pleased with the results and gave Josh the go ahead. I shot this in rear sync with my shutter at 1 sec, f 3.4, and iso 100. My flash was at a quarter power facing Josh around a 30° angle. After three attempts Josh was able to land the soul, my flash fired, and everything went smoothly.