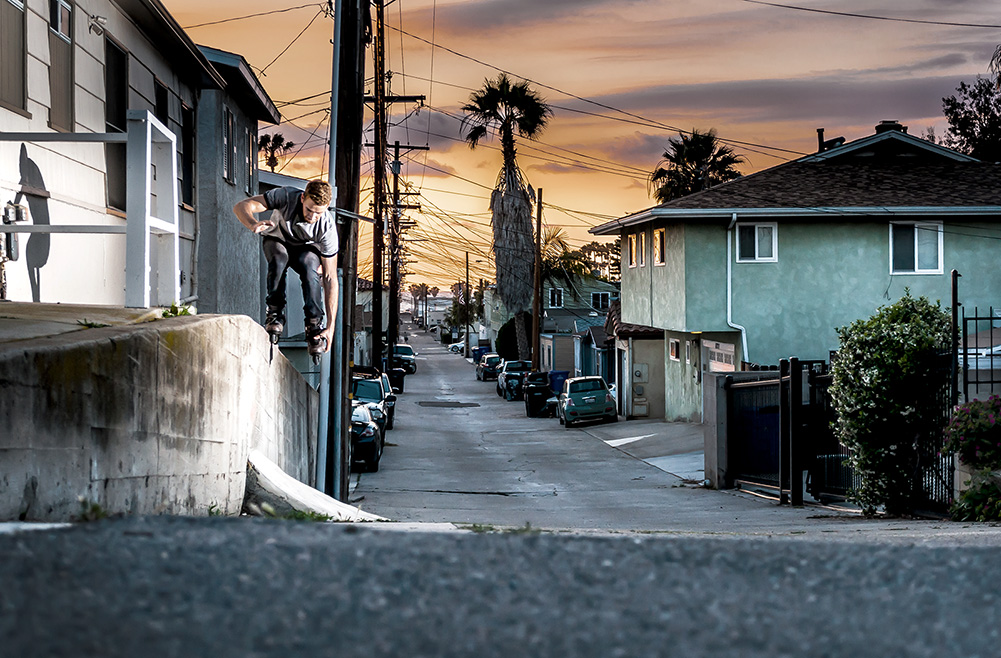 It was June and San Diego was being hit with some gloomy weather. It had been raining the past three days, and this one appeared to be no different. As the day started out I had no intention of blading or even going out to take photos. But I eventually found myself hanging out in Ocean Beach with Logan at a locals bar drinking a couple beers, and sharing some old blading stories while we tried to wait out the rainy weather. After a few beers the weather started to clear up and the sun came out.

Logan had been telling me about a transition to a ledge in an alley somewhere near he house, so we decided to check it out. When we got there I knew exactly what kind of shot I wanted to get.

There was about 30 minutes left before the sunset, so the sky was lit up with some really great colors. I got on the phone and texted Garret Mitschelen like “Yo, you off work yet? Come get this shot on a sick alley ledge by Logan’s! True Mak’s the trick!”

The almost immediate response: “I’m on my way.”

Selecting an angle, setting up the flash and getting my camera settings correct were quite easy for this shot. The angle came to me right away, so I just needed to get the flash set up in a way that it wouldn’t be in the shot. This ended up being about 15 ft. away, facing the ledge at a slight angle.

With the flash set at ¼ power, the camera set at iso 100, f 5.4, and a shutter speed of 1/250, I waited until Garret to show up. When he finally pulled up and got strapped in, he landed the true makio after a couple tries, I was able to snap the pic, and the shot turned out exactly how I’d pictured it in my head.